Good question, I decide asset allocation at an overall portfolio level as I invest in Indian + global equities. Currently, the equity allocation (including global stocks) is in mid-70s i.e. I have 70-75% of my current networth in stocks. I don’t change this allocation everyday, the last major reshuffle was in the beginning of 2020 when I increased my equity allocation. The timing could have been a bit better (given how large the March fall was). Incrementally, I bought more stocks in February-Ma…

International portfolio is shared below.

I started investing globally sometime in 2018. The current portfolio is shown below. The buy and sell rules are the same as that for my Indian portfolio which is shown here. The long term goal is to generate >10% returns in USD. Entry strategy: Shares are acquired in 3 equal tranches with difference of atleast one month between two traches Single sector allocation < 25%, single stock allocation < 20% Exit strategy: Shares are sold in 3 equal tranches, similar to the buying rule Exit reaso…

About emergency funds, I always keep 2-3 years of my expenses in my bank account.

About incremental cash from my job, I deploy in a few mutual funds along with stocks and bonds.

Hello Harsh,
How do you invest in US stocks? Which brokerage? Any resource to understand taxation?

I am from the semiconductor industry and I have good hold over who is doing well/will do well in the coming days in the industry. The plan was NVDA & AMD but unfortunately, my venture to buy US stocks got blocked in march because vested asked me to fill some form and submit at my bank. I decided not to step out for sometime.

Have you studied or had a chance to look at micron?

I live in Switzerland and invest through Interactive Brokers. Taxation is different for me due to my residential status, so I guess you need to ask your CA about it. It will be great if you can start a thread on semiconductors so that we all can learn from you

I can only say from technological side. Zero from fin side. Not sure if that makes for a new thread

Let me mull over it

As of today, I have re-added HDFC AMC to my portfolio (position size: 3%) and reduced the position size of Nippon Life AMC to 3% from the earlier 6%. This switch is because of the much more reasonable valuations of HDFC AMC than when I sold it (in July, August 2019). Whenever I sell/switch a position, I keep a track of how the sell/switch transaction worked. Let me illustrate how.

I first bought HDFC AMC at its IPO in August 2018 (1100 price), added more shares in October 2018 (at 1300 price). Market then re-rated it very quickly and I sold the position between July-August 2019 at prices ranging from 1960 to 2400. As it usually happens, the stock was in a very strong uptrend and went up to ~3800. With near term uncertainty around mutual fund flows, the stock is now back to much more reasonable valuations. Now lets evaluate if my switch actually worked. I sold my last shares of HDFC AMC on 27.08.2019 at 2400. Since then (i.e. 27.08.2019) the overall portfolio has given absolute returns of 13.5% (and IRR of 18.1%) whereas the stock has gone down from 2400 to 2180. So, I did much better in selling the stock then and buying it back now (how future plays out is anyone’s guess). Buying quality is not enough, we need to have growth and valuation support. 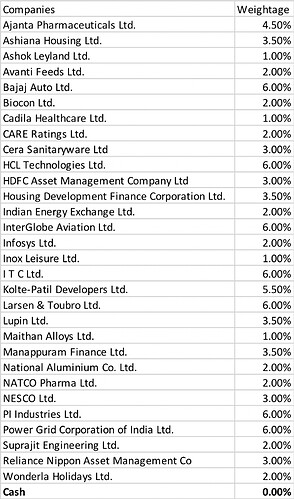 GROWING ESG CONCERNS KEEPING FIIS AWAY
With global financial institutions prioritising investing in companies with high compliance to environmental, social and governance (ESG) norms, they have been reducing their exposure in ITC, the country’s largest cigarette maker. From 20% at the end of June 2017, the FII holding in ITC declined to 15% at the end of December 2019. Its sustainable business practices (being water positive, carbon positive and solid waste recycling positive) have failed to win over its ESG-conscious investors.

Five factors to consider before you invest in ITC

Rising tax burden, smoking curbs and lukewarm performance of cos non-cigarette biz among others, has caused stock to underperform

Hello,
Would love to know your thoughts on CARE Ratings.
Thanks

This Nirmal Bang interview (link) provides a lot of insights into how the business is doing and how it might unravel going forward. My broad interpretation is that the company should do revenues of ~350cr. in FY23 (as per management guidance). Profitability will be much lower than in the past because they have finally decided to pay their employees properly and want to build a quality rating house (thats what the management pretends currently). Plus, they are investing more in technology to take care of smaller ratings (they are talking about algorithmic based ratings).

Lets speculate about margins, CRISIL makes a net profit margin of 20-25%, ICRA does 20-30%. Lets say with operating leverage playing out, CARE is able to meet 25% margin in FY23 (PAT ~ 87.5cr.). Now put a PE on it, in good times this business will be highly valued because its capital light and if they are able to diversify revenue lines, there is no reason why they should trade at large discounts to ICRA/CRISIL.

About comparison with Moody’s. If we have to do it, we should do it properly. Not just by looking at the beautiful long-term stock price chart. The US markets are the most bonded markets in the world. That’s not the case here. And interest rates there are a fraction of the interest rates here. Those are just two reasons why I am reluctant to compare apples with oranges. There are others (for example sample size of 1 data point!). But some people have been pointing to the Moody’s chart. So, if …

As for me, I stay invested and will increase my position size if management starts achieving their promises. Its quite cheap right now.

Hey Harsh,
As you seem to be quite bullish on the Real Estate Market,I would love to know your views on Godrej Properties.
I have been looking at it as a potential investment candidate for a while now but until yesterday the valuations did not justify an investment.
But the Q2 results which were announced yesterday were quite bad and as a result the stock has declined.

They are growing very fast and luckily the market likes them, so they have been able to raise equity at very heavy valuations building a monster of cash. This will allow them to lead this wave of consolidation in residential real estate. However, taking on so many projects can lead to dilution of brand name, even if a few projects get delayed. Execution for me is the biggest risk followed by brand dilution.

I don’t like their current valuations and that’s the primary reason I don’t have Godrej in my portfolio. However, I listen to their commentary because they are now the largest pan India player.

I have made some changes in the model portfolio today which are stated below.

A lesson for future self
In the March 2020 drawdown, I bought a number of cyclical and commodity companies (Maithan, Nalco, INOX, Ashok Leyland, Avanti, etc.). In hindsight, it was a great call to buy very cheap cyclicals and returns have been frontended. The only thing that I did wrong was the smaller allocation, I should have bet bigger given valuations were favourable. Given this is my first year of dabbling into cyclicals, I will give myself a pass. The lesson for next time is to bet bigger when valuations are in my favour.

I have been studying a few companies that can enter the model portfolio (Glenmark, Eris Lifesciences). If anyone can provide any unique insights into these businesses that are not already covered in the VP thread, I will really appreciate it. The model portfolio is below.

When we analyse more and more new companies we end up investing in many stocks. One skill to learn is ranking candidates and doing meaningful allocation at the top. But it is very difficult to implement due to the fear of missing out some stories. I’m trying to learn this art but no success so far. If you are looking out for investing in new companies, I would recommend to swap instead of add.

I’ve lot of overlaps in terms of stocks as well as recent actions! Will publish PF and provide the link!

I have looked at enough model portfolios to realize that 15% returns (which are my expected returns) can be made with 3 or 30 or 300 or 3000 stocks. Returns are a multiplication of your hit rate and average win to loss ratio, there is nothing more to it.

Definition: Over the last 10 years, I compute the number of years a company has generated ROCE > 20% and the number of years they have generated positive FCF. If the sum of these two are >14, I consider the company to be a consistent compounder, else an inconsistent compounder. Exceptions to this rule are lending based companies, companies with limited history, and other manual overrides. In lending companies, I consider HDFC to be consistent and Manappuram to be inconsisent (although I am holding both at the same position size). Nippon and IEX are consistent compounders despite having limited financial history. Where I use my discretion is in cyclical companies like Indigo (6 years with ROCE > 20% and 9 years of FCF until FY19), Avanti feeds (cyclical margins but ROCE > 20% and positive FCF in 8 out of 10 years), Lupin which I quantify as inconsistent.

Thanks, for sharing your insights and portfolio construction. Very helpful.

One of the most important parameters to judge a business’s quality is its ability to generate a return on the money it employs on fixed and working capital. It is also one of the key metrics, which when measured over years, can help you assess a...

He talks about somewhat similar approach using ROCE - I picked CERA from here (check Google sheet link in article) as it passed screener tests and hadn’t rallied as much as other from 52W low in March which turned out to be a good pick.

Ok so a lot has happened since my last post! I’ve been actively building portfolio during Covid crash and was able to add / average many positions with decent buy price. Of course, in hindisght, should have invested more during March-June.

Please find below the latest portfolio, broadly categorised into Core and Satellite. I’m aware that it is perhaps too many per liing of most investors but I do have lot of time to track (kill)!

Plus, some of the companies have been holdin…

I wish I can scientifically apply Kelly Criterion to my bets.

One thing I don’t understand is that how you classified these stocks as compounders, especially the inconsistent ones. For instance NALCO’s sales, profit and stock price hasn’t moved anywhere in the last 5 years.

This categorization is far from perfect just like any other categorization. In the case of a commodity company, fluctuations in realizations often dominate sales numbers. I prefer to focus on volume numbers which have been growing for NALCO albeit at a lower pace.

You might want to read the thread on NALCO to understand their business profile and the underlying value drivers.

I will highlight other fallacies of my categorization methods. I have also said that bajaj auto is a consistent compounder because it generates free cash flow and has very high ROCEs, however sales growth has plateaued once they reached a 20-30’000 cr. annual run-rate half a decade back. Compounding in these cases happen by way of retained earnings which are not paid out to shareholders.

Ashiyana had analysed some time back. They book some of their projects in their non listed entity. You can check on that.

Since u are based in the hub of biotech , which are the US listed biotech firms you like. Both smallcaps and ppl like roche, novartis