Crazy selling by one of the fii in ingrevia…can some senior members justify this selling…are we expecting very bad qtrly results?
Please share your inputs

In recent spot contracts, Acetic Acid prices have gone up ~15% / Ethyl Acetate prices by ~12%. EBITDA per tonne remains the same but with higher Acetic acid prices, margins will come down.

Somewhat connected aspect to Ingrevia, but more so to promoter group.

Post Oct 21, market has had its downs and has recovered mostly at Index levels. Something interesting at Bhartiya group level - all three listed companies vs midcap index

While each business is very different from each other but barring Ingrevia, other two has clear visible issues, discussed in respective threads. Ingrevia doesn’t seem to have any known issues barring some margins volatility as of now( LSC part primarily, rest of biz doing well). Given each biz has sizable float and retail holding, volatility is higher, none of them have covered lost ground.

Could this drag on Inbrevia be a temp effect due to group level narrative, believe so as of now.

Pl draw your own conclusions, this is just an observation at group peers - Invested in Ingrevia. 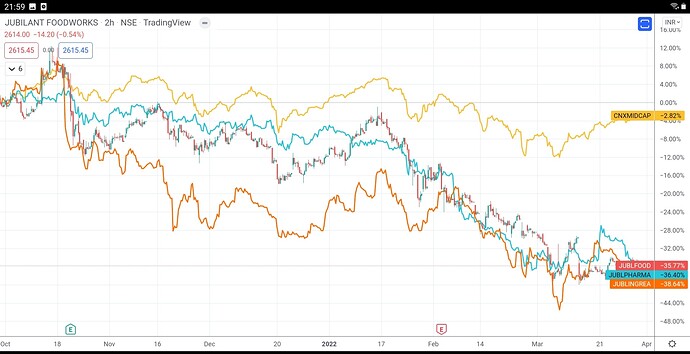 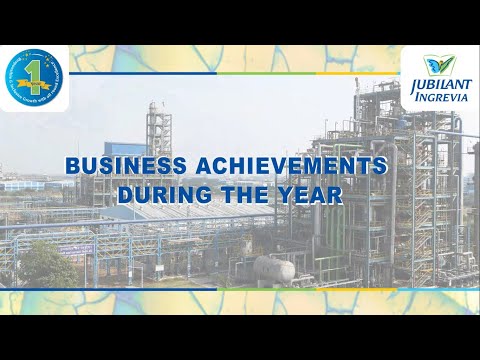 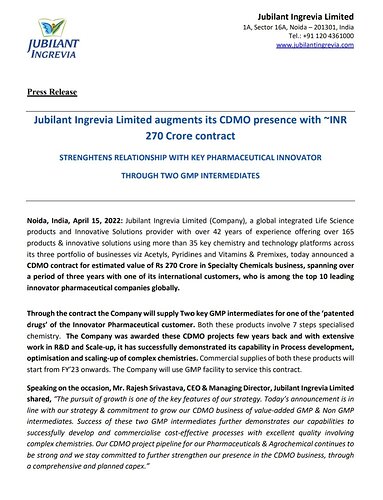 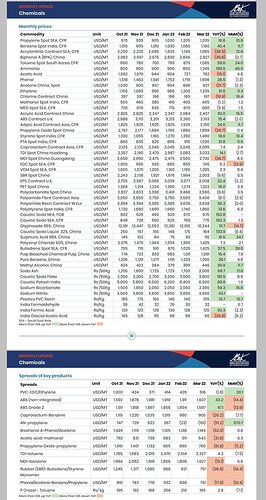 GNFC Q4 22 results Management commentary
The performance is driven by Chemical Segment. Chemicals like Acetic Acid, WNA, A N Melt and Ethyl Acetate did quite well.
This indicates that LSC division of Jub Inv may post good Q4 numbers.
Today GNFC is having their Q4 concall @ 3.30 pm. 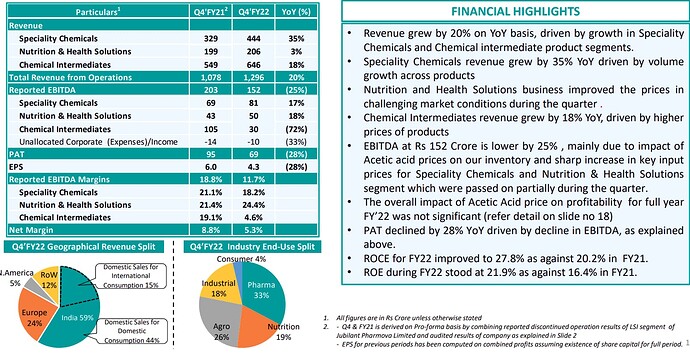 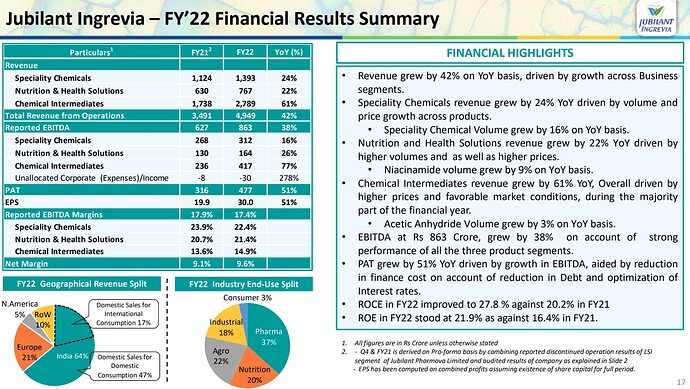 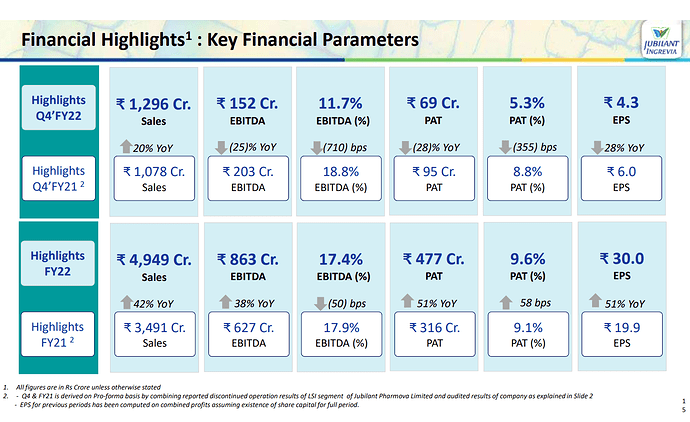 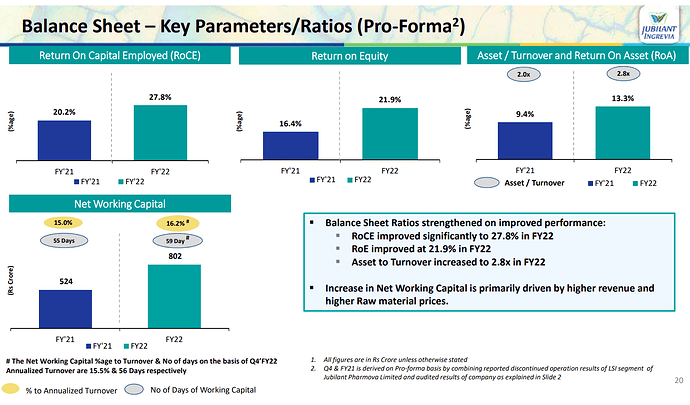 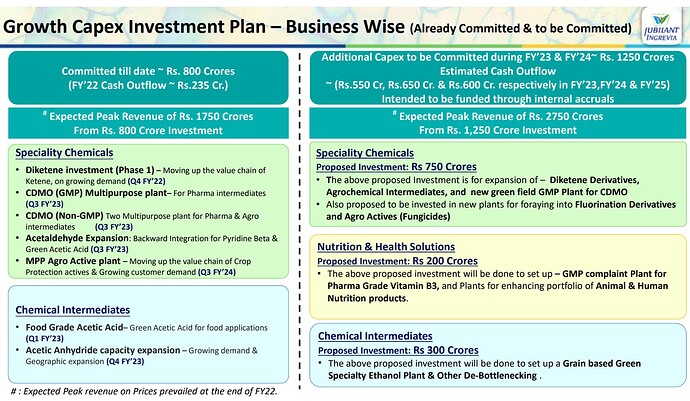 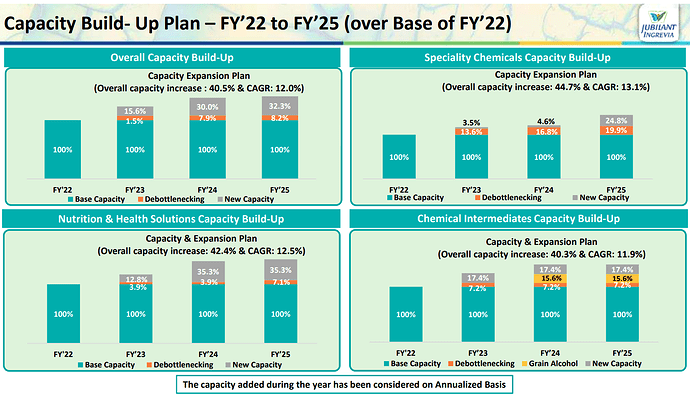 The expansion into Diketene chemistry could be really a big addition to the company’s product profile. Diketenes are a major component in Paints, Dyes and Agro Chemicals. Now there are two primary ways to produce Ketenes (Diketenes are manufactured by dimerising ketenes):

I am really curious to know as to which route will Jubilant be taking up. Gut feeling says that they will take the Acetic Acid considering the company’s specialisation into it (Acetic Acid is one of the primary RM for the current line of production) and also the fact that the process using AA produces just Water as a by product compared to harmful Methane gases produced in the second reaction. Now if the big Diketene expansion also gets exposed to Acetic Acid price volatility (as we saw in the last two quarters), it cannot be a sustainable story going ahead.
Edit: Even Laxmi Organics produces Diketenes using Acetic Acid as can be seen in their EC report form 2014 here

I am still not able to understand that if Jubilant is so much dependent upon Acetic Acid, why not start manufacturing the same along wwith so many other backward integrations they are coming up with? Which economic sense is hindering the company from insulating its major products from price volatilities of their Raw Material costs?

Disclosure: Invested in this counter.

Dhruv Bhimrajka: Sir my question is, are there any plans for us to pick up a captive acetic acid capacity? I know you have answered the question with respect to forward
agreements. So, if you can clarify on this also, please?

Rajesh Srivastava: No, we do not have a plan to make the investment on producing acetic acid for capital use, because that is not making sense. This acetic acid plant is very
specialized food grade acetic acid. So therefore, this much volume, which is currently required by market, we have entered it, but we have no plans to make investment on acetic acid further or captive consumption.

Yup, went through that concall and the 2 before that. Many participants have raised this doubt on expanding their Acetic Acid manufacturing but it seems the management does not see economic feasibility for the same. I am curious to really understand the complete thought of the management in arriving at this decision.

I am not a technical expert but sharing the following from my limited knowledge of the business:
Acetic Acid can be made through two routes- using either methanol or ethanol as a feedstock. In India GNFC produces Acetic Acid (AA) through methanol route. Methanol being a crude oil derivative its prices are fairly volatile and most of the time cheaper than Ethanol. As such AA made through methanol route is almost always cheaper than that made through Ethanol route. Ethanol on the other hand is also used for making potable alcohol and now for petrol blending, which are far more lucrative for a distillery. As a result producing AA using ethanol as feedstock is not always economically viable. Most Ethyl Acetate manufacturers therefore don’t prefer to produce AA in-house but outsource it.

The argument makes sense but Jubilant uses even Methanol as feedstock to make formaldehyde and acetaldehyde. Why not also use it to make Acetic Acid?

Hi All - would like to understand more on Jubilant Ingrevia recent downwards price movement. To my understanding the only issue i see is the margin contraction and impact of acetic acid prices volatility. Anyone happen to notice any other reason?