Don’t you think you should use p/b ratio for valuation instead of pe ratio for banks.

PB is a good proxy if there are large provisions/opex that are going to mask the real earnings of the bank, eg axis and icici from 2015-2019. In a steady state we will have to look at a lot of factors, a bank with a pb < 1 is not really cheaper than a bank with a pb = 2 if the latter has better RoA and RoE as it can compound book at a faster rate.

15 years later when credit starts to saturate and things slow down and banks dont grow as fast it will be the PE that determines the dividend payout, whereas unless the bank is getting acquired the book value will never actually be realised be investors

50/- arbitrage opened up on the swap ratio again for anyone who wants to make a free 3.5-4%

50/- arbitrage opened up on the swap ratio again for anyone who wants to make a free 3.5-4

What if by the time swap is recorded, hdfc bank falls the gap percentage instead? No arbitrage then…how can we know if ever there is an arbitrage as we never know which ones out of 2 would rise or fall in future to bridge the gap?

In both cases it is better to be with Ltd. Doesn’t matter how we own it.

Considering Mr. Market’s current mood, HDFC combined entity is available at a P/B of 2.6. By the time planned merger completes (projected 18 months), Book Value would have grown by ~23% (assuming 15% annual ROE for each entity) and P/B would be 2.1 basis today’s Mkt. Cap. Let’s see how it unfolds.

Basic Maths as below:

This might be due to the merger of HDFC LTD and HDFC banks which is yet not completed.

Some of the deals that HDFC Ltd currently does (like RE Land Financing) will be difficult in the merged scenario since they will have to adhere to bank regulatory norms. Hence the base will itself will be different ( lower) in such a scenario and any growth assumptions will need to be taken from that lower base and not the present consolidated base.

Market seems to be downplaying the branch expansion driven lending growth that should occur in the bank. From the current 6,000 odd branches, HDFC bank plans to add 1500 to 2000 branches a year, or 25% to 30% growth in distribution. These branch managers will be expected to bring in business for the bank, hence the loan growth should also mirror these numbers somewhat (although with some lag), not considering the same store growth from existing branches that should add to the growth. 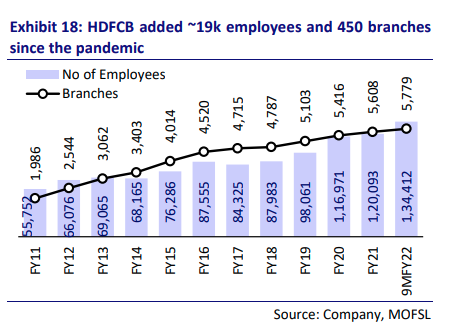 The country's largest private lender HDFC Bank is planning to facilitate a shift in its payments module from the existing core banking platform. This would ensure minimal payments downtime, even if core banking is not available. 'This 15-month...