The history of casual dining restaurant startups is just one big graveyard, yet Barbeque has been able to scale up from its first restaurant in Mumbai in 2006 to 164 restaurants today all over India & 11 international restaurants.

Before we dive in, a little bit of buffettology - “From 1984-87, Berkshire Hathaway was sitting on over $1 Billion in cash and did not make a single investment in any public-equity. Then, in 1987, they invested about $1.2 Billion in Coca-Cola Common stock – buying every share they could get their hands on over a six month period. Berkshire ended up owning about 6% of Cola Cola. Amazingly, they invested 25% of Berkshire Hathaway’s entire book value in a single company.

At that time berkshire was trying hard to geographically expand the market share of acquired company see’s candy but despite many attempts they failed and this unique learning from failure helped them seeing coke differently than others & rest is history they embraced this ability of coke to be accepted across states / border, which markets weren’t pricing in at that time. “

Whereas BBQ nation IPO happened at a very attractive price 2x Fy20 sales (now it’s too trading at 6x its FY22 sales, yes we all missed the bus.)

You can say BBQ nation is not QSR but i’ll try to argue maybe perhaps it’s better than QSR’s mentioned above.

Lets deep dive into understanding it -

How did they start ? The pain point they solved :

India’s leading restaurant chain Barbeque Nation was started in 2006 by one of the Promoters Late Sajit Dhanani who was the brother of the current Managing Director of Barbeque Nation.

Sajid Dhanani who handled the popular hotel chain “Sayaji” in Indore, once experienced complaints from customers regarding cold appetizers during the cold weather of winters in 2006. To resolve such complaints, he came up with the idea of making an experiment to serve a table of customers with a “live grill”. This encouraged Sajid to establish a separate Barbeque Nation restaurant. The first branch of the restaurant was opened in Pali Hills in Mumbai. After that, the restaurant witnessed massive growth by opening 18 more branches in a short duration. Further, 23 stores were opened by the brand in FY 2007-2008.

In the year 2014, the concept of “Kulfi Nation” was introduced by Barbeque Nation in its every branch. This is a kulfi counter that facilitates customers to select from 8 kulfi flavors.

Further, in 2015, “live counters” were opened by the brand at its outlets in which food as per the preference of customers would be cooked by the chef.

Wonderful thing about this business is till today (exception of Covid year), they never had to close down any restaurant due to lack of business, wherever they opened it was an instant hit.

Typically they require about 2-3 Cr of capex per restaurant, their restaurants become break even on year 1 itself, by year two they start earning 15-17% EBITDA margins and by year 3 the EBITDA margins stabalize to 25-27% .

In BBQ nation internally they call their customers “guests”. Kudos to the founders who came up with these minute things which matter a lot in terms of defining the company’s DNA.

Birthday Celebration - (hell of a marketing technique - they just cracked it) 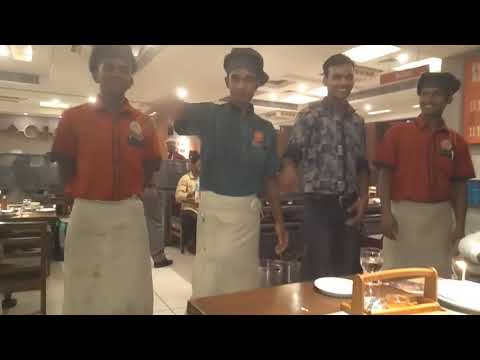 This not only makes customers feel special, free cake works as reciprocity - in social situations we pay back often more than what we received from others and customers post their birthday celebration video online / whatsapp which generates free marketing. 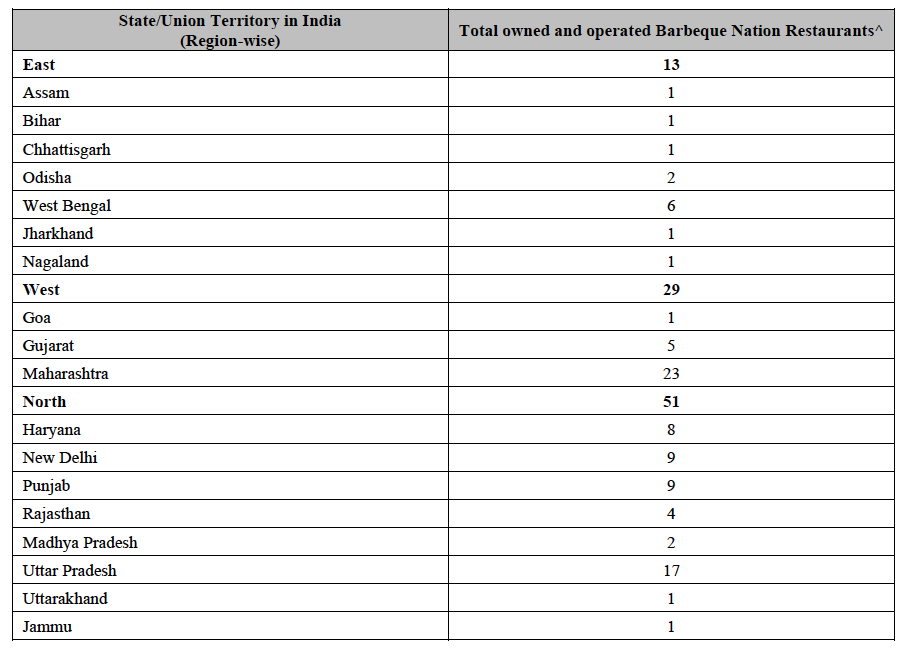 Their presence all over India means they have a supply chain sorted out everywhere and now they should be able to build upon it.

What changed due to COVID ?

Covid forced them into product innovation and transformation of delivery business which includes “Barbeque in a box”, “Grills in a box”. These two products have been an instant hit and already Rs 100Cr annual turnover business. 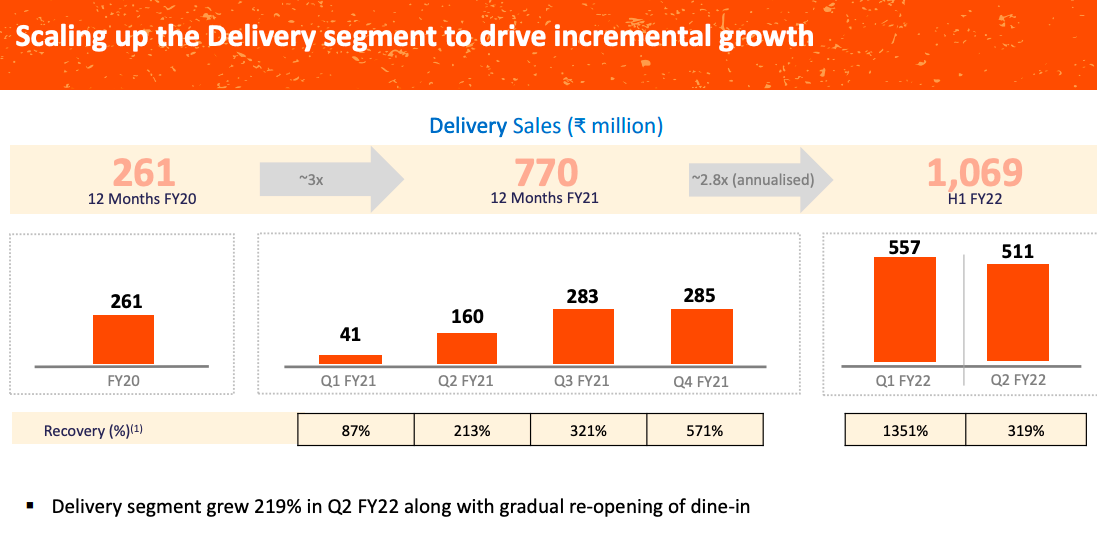 Plus in order to save commissions to Zomato of the world, Company also made rapid strides in digital, with its own app and website geared to take delivery orders as well as provide in-store dining Reservations.

Pioneered a new delivery product: Barbeque-in-aBox • 2.9x increase in delivery revenue which increased to ₹ 770 mn in FY21 from ₹ 261 Mn in FY20.

They are spending approximately Rs. 25 lakh per extension kitchen and currently we are doing an average monthly sale of approximately Rs. 9 to 10 lakhs, this is during the first few months that we have been operating it with Gross Margins of 66% & Operating Margins = 20%. 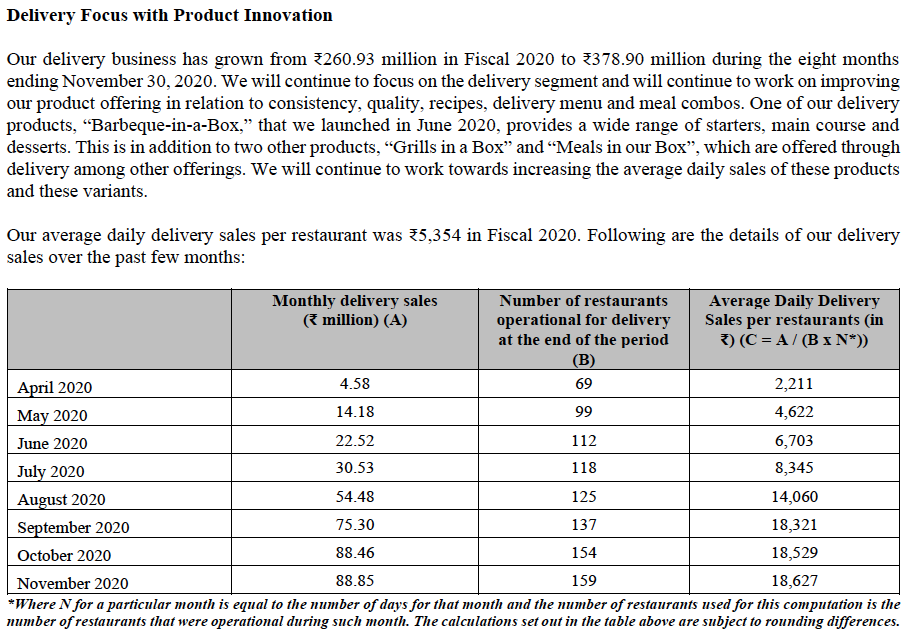 Are they just metro constraint business or are they able to scale up to tier 2-3 cities ?

Given they never had to close down any restaurant due to lack of business it does suggest they have the product market fit works across geography.

And revenue has grown inline with the store expansion, it does suggest it’s a beyond metro business. 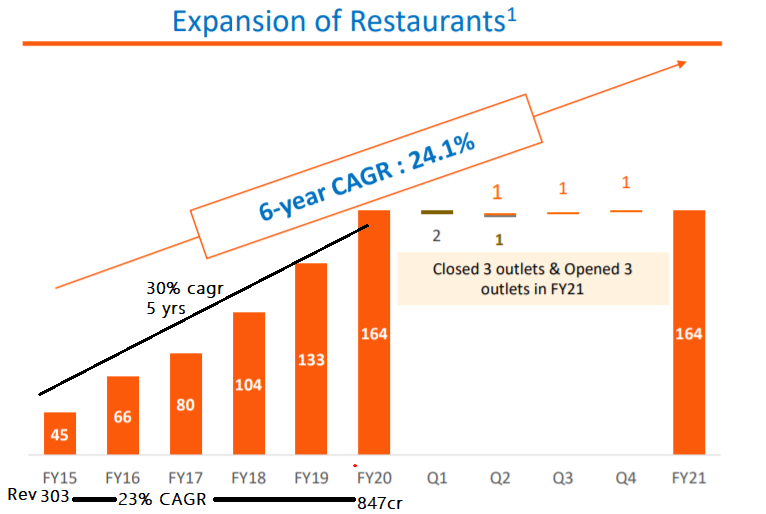 It takes 3 years for a new store to fully mature resulting in revenue growth slightly lower than the store expansion growth.

Another wonderful thing about this business is its a working capital negative business - Kind of shows they have bargaining power over their suppliers ( generally happens when they take commodity (food in this case) & turn it into branded product) .

As you might have heard - “Restaurant businesses are bad business only QSRs generate wealth and on an aggregate rest of the segments CDR (which BBQ does) and FDR destroy wealth.”

Does it apply to CDR businesses of BBQ Nation ?

Unlike other CDR businesses -

Number one criteria they look at before opening a new store is - Rent to Rev should be 10%.

BBQ model is - Entire consumer experience is of CDR (Casual dining restaurant) but entire backhand is of QSR.

Their average SSSG is around 6 % of their mature restaurants meaning they have been able to pass on the inflation to their customers and average EBITDA margins are at 22% at store level & if we deduct 6% overall IT cost we get around 15% at overall level.

To value BBQ nation we will work with 15% EBITDA margins and 7% SSSG of mature restaurants.

This means with our very conservative back of the envelope ( no excel sheet) calculations it’s not a no- brainer stock,

but let’s assume he don’t know the potential & markets as a whole more intelligent than him ( As somebody bought from him too) lets have more scenario’s see what is priced in.

Let’s say after FY26 they again double their number of stores to 600 stores in 5 years.

Let’s say from here on it’s a 7% CAGR revenue mature company (Fully penetrated with 600 stores) and markets will give it around 10-15x multiple.

We can work with another doubling of stores in next 5 years by FY36 and so on till FY41 (total 2400 stores) but i would refrain from doing bcoz not every one is HDFC bank, it not peace of cake to grow 15% CAGR for 20 years, if something can do it ofcourse its a value buy irrespective of its multiple today.

But even if we work with that, returns are going to be around that of the index ~12-15% CAGR, even if we will be proven right after 20 years earning index return is just not worth it.

Ofcourse one can work with higher PE multiples, saying interest rates are going to be low (1-2%) in India after 20- 30 years from now, to this logic all I would say is that PE re-rating is going to be for index too.

Also, one can work with saying in india today all junk food companies trade 6-15x sales (or some multiple of how they are trading globally) and do the same calculations on sales numbers instead of what i did on net profits & say see its trading cheap, yes feel free to do it but this approach never made any sense to me including nonsense ratios like EV/FCF, EV/ EBITDA, EV/CFO etc.

Often folks argue by saying hey look at DMART, 15 PE looks too conservative why not 200 PE ?. It could trade at 30 to 200 PE anywhere. To this I don’t have any answer but I will refrain from assigning high multiples.

Working with low multiples works for me and whenever markets give me high insane multiples in future I take it as a good opportunity to sell ( happy to get lucky in future) but buying decisions are never going to be based on getting lucky in future.

One can say “hey delivery business can grow at much higher rate than 7% cagr for mature stores “ yes that is likely but even if we work with 25% cagr growth in delivery business from 100 Cr to 1000 Cr sales by FY31, it doesn’t add much to the bottom line.

Very few IPO’s are priced attractively and BBQ nation at Rs 500 per share was indeed a very good price. Not sure what markets overall pricing in today but for sure a very bright future.

Risks :-
Changing preference of consumer overtime.
Management fails to expand to 300 stores in 5 years.
Management spending more on loss making international business or non-core Italian restaurant businesses.
Delivery volume dying out and today its at its peak due to pandemic pent up demand.

PS: copied from blogpost Barbeque Nation | Value Seeker on permission from owner to have wider discussion.