Strengths
Market leadership and strong brand in the domestic luggage industry. Popular Brands include VIP , Alfa , Skybag , Aristocrat etc . The company entered the ladies handbags segment and relaunched its Skybags brand, which has gained significant traction in the market.

Weakness:
High dependence of Soft Bags on Chinese Imports which accounts for a major part of VIP’s revenue, exposing the company to adverse forex movement 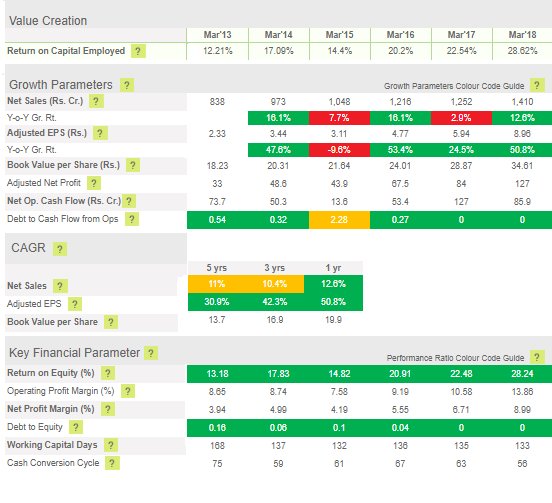 Promoters Remuneration well under ceiling , No equity dilution , Tax % are around 30%

Negatives:
Contingent Liabilities of around 106 Cr relating to some Sales Tax Issues(More than annual Profits)

One Point i am unable to understand:
The Tangible assets of the company has reduced from 85 Cr in 2014 to 60 Cr in 2017. Do not know the exact reason. Depreciation % is in the range of 20% for every year and looks like company take Land , Spaces on Lease. No new assets are created which raises some doubts.

In one of the con-calls, the management mentioned that they are not making any provision for the contingent liabilities (the case in which they were taxed twice for products) as they are confident that the result of the case is going to be in their favor.

But since contingent liabilities as a % of reserves and surplus is around 33% so if they lose the case, it could severely impact the company’s financials.

I have done some work on VIP a year back. Here’s the blog link.
https://equityunravelled.wordpress.com/category/industry-analysis/
pdf file link:-
https://drive.google.com/file/d/1YHB_gAsrC9NxOWrw8egJnJHDsz4KaiKq/view?usp=sharing

Thanks for appreciating the work.

For soft luggage, I believe its not about the technology but the raw material which has to be imported from China. So currency risk will still be prevalent if the soft luggage is manufactured in India.

Actually, China has become the soft luggage factory for the entire world. A small percentage of soft luggage is manufactured in Thailand and Vietnam. So, mostly all the companies generally import from China.

In order to reduce its dependence on China, the company started a manufacturing unit in Bangladesh as the labour is relatively cheaper than in India and China.

The company is also planning to double the capacity of its Bangladesh unit.

The management mentioned in its Q1FY19 concall that the soft luggage growth is expected to be way more than what the Bangladesh unit could support. Hence, the significant proportion of soft luggage would be imported from China.

On the valuation front, even if I don’t consider contingent liabilities, and assume a 25% growth rate on Fy18 PAT, still stock doesn’t look cheap to me.

Just one correction, I have used exit multiple method, not DCF for valuation in my report.

Due to subdued market conditions in UK, Europe and Asia Pacific, the international business of company declined during the year. Duri...

What was the business case of resolution of giving Ms. Radhika Piramal - Vice chairmen and executive director relocation to United Kingdom with salary of 240000 GBP and relocation + housing etc for 2 years (Page 8)? I found it very strage. Is it a corporate governance red flag?

Increased Customs duty could effect VIP and Safari , and this might well have been the reason the stock was correcting in last few days 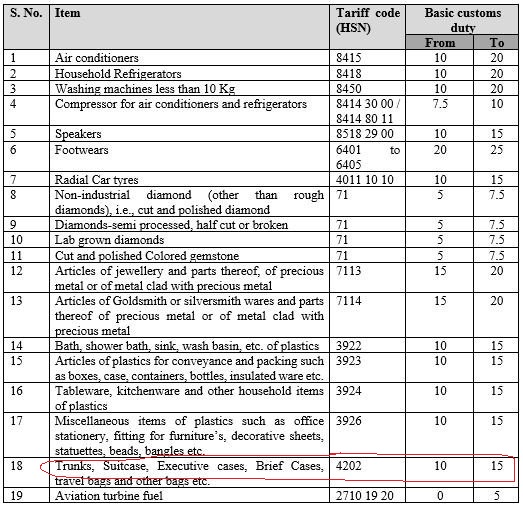 There are only 3 main companies producing luggage & bags with having established retail network…There is only one consequence of squeeze on margin, which might also be borne by customer as there is no option. Trade war does not change the equation of flow though it adds hurdle. If the competency is not there than you have no option but pay more till you either build that competency or have technology to glide you over the top. Really unfortunate that China is eating the world from where there is no go back it will take collective will of all countries to fight its ambition.

Xiaomi entering the luggage market in India in its own style.

Xiaomi is moving beyond backpacks and has now added suitcases to its lineup with the launch of the Mi Luggage at affordable prices in India.

This has been in my radar for awhile and the valuations were a big barrier earlier. With the current valuation, this is worth a look.

VIP as a brand has been around for a long, long time. Caprese and Carlton seem to be carving a presence and could take away market share from unorganised players and Samsonite respectively. Aristocrat as well has been doing reasonably well lately. Skybags is pretty much omnipresent these days. So as a branded play, this company is investing in branding and it seems to be paying off. The segments and branding as well is well-thought out so there is no overlap and targeting as well is on point.

Debt reduction - Consistently reduced debt from 107 Cr in FY11 to zero in FY17.

Sales growth - Topline has grown every year in the last 10

This is primarily due to the company not being able to pass on the RM cost increases to its customers. The material cost increases mirrors the drop in OPM. 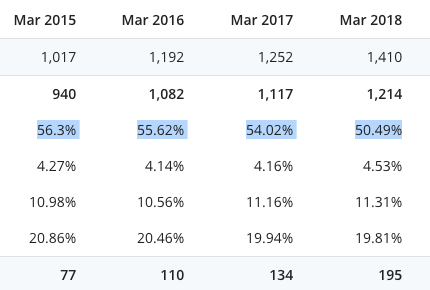 Either way, good things seem to be happening and it reflects in the RoE too with the company improving its RoE in the last 4 years and is operating almost close to 30% at present.

Most recent quarter was particularly stellar and got a lot of attention because the topline grew almost 30% and bottomline almost 50% and OPM shot up to an all-time high of 19%. Will be interesting to see if they are able to maintain those metrics in the coming quarters.

A good brand should be able to pass on RM costs increases so all the risks shouldn’t matter if the company’s brand image is strong enough. We have to wait and see.

With RoE close to 30% and growing between 20-30% with zero debt, 30 P/E is not unreasonable. I think they could do 200 Cr PAT for FY19 which makes current price a reasonable value.

Disc: Been buying around 400 levels which I consider fair value

VIP Industries and Safari Industries coming out of ASM from tomorrow (30th Oct, 2018).

Annexure.xls (57.5 KB)
Refer Annexure III in the above file.

I had a look at screener and Q2 seems to be the weakest quarter for VIP. But this year, it has good 30% revenue growth over Q2 2017. There is PAT growth of 23% YoY. But the margins have shrinked in this quarter.

@bheeshma and @phreakv6 Your views are invited.

Consolidated numbers look alright to me. I see slight expansion in gross margins and operating profit margins and decent growth. This is a seasonally weak quarter for VIP going by last few years, so I think numbers are decent. Post Profit/Loss reclassification adjustments, numbers look even better (Income 63% up) but make sense little sense to compare from an operational standpoint. 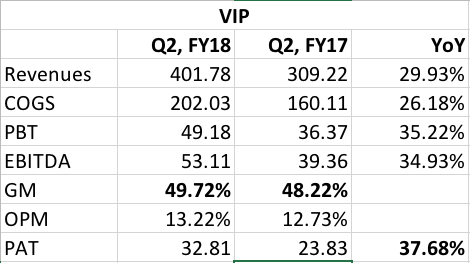 [Excerpt on Safari result: The June to September period was especially challenging with twin headwinds of raw material price (GPM dipped by 7 percentage points) rise and a weaker currency. This was evident in Q2 earnings of (http://www.moneycontrol.com/india/stockpricequote/plastics/safariindustriesindia/SII01) An increase in import duty was also effected that stands to impact margins as the entire soft luggage is imported.]

VIP and Safari follow different inventory accounting methods, VIP accounts for its costs of goods sold based on Average Cost while Safari uses the FIFO method. This causes more fluctuation in the gross margins for Safari than VIP.

That said input cost pressures are more or less the same for the both the cos. The luggage industry is characterized by a few players in each market but numerous suppliers based out of China mostly, so sourcing costs are a little more stable in this sector and there is competition amongst suppliers on price. Part of the input cost fluctuations is thus absorbed by suppliers, so gross margins i would expect would remain stable.

In 2013, VIP carried out a decongestion exercise to forecast production in response to what was selling and that has helped it to reduce costs from the sourcing level to the distribution level. These measures have a more of an impact on margins than crude/currency etc fluctuations.

Thanks for the detailed reply.

Does it mean that VIP is in a better position than other players as far as sourcing is considered and thereby in maintaining margins? How sustainable do you think are the margins and the revenue growth going ahead?

Most of the demand which has been catered to by the unorganized sector is in the Rs <=3000 price point, while organized players like VIP have traditionally played in the 3000-6000 and 6000+ segment.

VIP has 2 brands to cater to the sub 3000 sector ( Aristocrat and Alpha ), but it doesnt have a big market share there. Its market share comes from the 3000-6000 segment where it has a virtual monopoly & over 70% share with the VIP and Skybags brands. It is also aspiring to capture some share in the 6000+ segment with Carlton where again it doesn’t have a big share.

In my view, while its difficult to predict how margins will go, my sense is that they will have more success with the 6000+ segment with Carlton as its an easier upgrade and aimed at premium business travelers.

VIP has to balance 6 brands - Aristo, Alpha, VIP, Skybags, Carlton and Caprese at different price points while Safari has a singular focus in a specific price point.

If i have to hazard a guess, I think margins will be under pressure for VIP going forward as it tries to focus on the <=3000 segment and the >=6000 segment because costs for competing in both segments are higher. You have to give quality in the 6000+ segment and have to price lower than incumbent ( Samsonite ), in the <=3000 you have to give up margins as freight costs are higher there and go head to head with Sudhir Jatia.

Lastly - they have a good CEO in sudip ghose who has been with VIP for a long time and has created brands with Samsonite earlier wrt to Lavie. VIP culture and leanings are more like Samsonite in many ways and that’s where I think it’s strategy will drift towards.

In any case, interesting times ahead for the sector.