Urea business forms 12% of company consolidated revenues in 2015-16. Urea is the second largest component of the fertiliser business-largest being phosphatic which is also up for sale (per the Business Standard article).

Fertiliser business is the lowest margin business line of TataChem (PBIT at 3% of net revenues) against company aggregate of 10% hence future EPS CAGC must increase with this sale.

Besides, the fertiliser business is subject to regulatory policy changes/uncertainties and price controls as per attached word documentTata Chemicals-Extract from 2015-16 Annual Report.docx (24.0 KB)
I also note from another article that fertiliser subsidies to listed companies like Tatachem and Coromandel have been dropping each year.

The TataChem share has hit its 52Week & all time high of 524.70 on August 10, 2016 & gradually slipped down as benefit realisation will be gradual as percieved by market. However, company strategy will ensure value accretion in the long term as I am confident the larger phosphatic portion of fertilisers would also be eventually sold.

I invite comments on TataChems presence in the consumer segment (dals, spices etc.) and whether they can ramp up ROCE & EPS in this business line.

Disclosure: I do not have any current holdings.

Living Essentials
India’s first national brand of packaged iron fortified iodised salt. Through the Tata Sampann brand, it houses High Protein Unpolished pulses range, low oil-absorb besan made from 100% chana dal and the uniquely developed range of spices for today’s homemakers who are looking at providing wholesome food to their family without compromising on taste.
Tata Swachh water purifiers are an innovative solution for water purification to masses
The Company has developed a range of nutritional products under the brand Sustentials to provide innovative wellness food solutions.
The products manufactured under this brand include FossenceTM (fructo oligosaccharides), GossenceTM (galacto-oligosaccharides) and other polyols and oligosaccharides.

Farm Essentials
Offers multiple farm inputs that are required to improve crop health and productivity. These include fertilisers, pesticides, specialty nutrients, seeds and agro-services.
The Company is also a key player in the segment of specialty fertilisers and customised fertilisers that provide balanced crop nutrition to the soil.
Tata Kisan Sansar (TKS) and Rallis Kisan Kutumb (RKK) is a network that offers services which enable farmers in creating and generating farm produce by offering information on new and improved agronomic practices and facilitating use of agricultural inputs.
Its subsidiaries Rallis India and Metahelix Life Sciences

The Indian soda ash demand is expected to maintain its growth momentum of around 4-5% in the next few years.
Current Capacity – 4.3 million tonnes. Manufacturing facilities in India, UK, Kenya and USA. More than 6 % global capacity share
Over the next 4 years, a total of 0.9 million tonnes capacity is expected to be added both through debottlenecking of existing operations and entry of new player. However, the projected increase in domestic demand is expected to be more than offset any potential increase in domestic capacity. Pricing pressure is expected to continue in the medium term.
Highest margin based verticals with around 50% contribution in revenues and 70% in profits.
Growth rates of 6-8% p.a. are anticipated for the next 5 years with increasing value-addition and branding in sodium bicarbonate

Salt - The estimated current annual consumption of edible salt in India is 5.9 million tonnes. The demand for edible salt is expected to grow at a rate of around 1.5%. Of the total edible salt consumption, it is estimated that 65% of sales is in packaged form with the remainder in loose form or under local labels.
Tata Salt share in branded segment is 60% , while in overall market is 25%.
A 2% increase in share will result in 10-15% company’s growth.

Fertiliser Segment – Crop nutrients, Urea, Fertilisers
6831 crores revenue from fertilisers segment contributing 40% to sales and only 13% of profits .In it Urea business is low margin business which is decreasing the margin of fertilisers segment. It has been sold at a good price of 2670 crores

Other Agri – Rallis India The Indian crop protection industry, which has been growing at a CAGR of 8%, suffered severe reversals in recent years due to back to back droughts. The domestic industry is estimated to have registered a negative growth in FY 2015-16 compared to the previous year, with most southern states and Maharashtra severely affected. This has led to challenging business scenario with the industry carrying higher levels of inventories compared to the previous year.

Investment Thesis
As higher sales in Inorganic chemicals segment does not require much capex for incremental sales, it will improve ROE.
Also agricultural related segments include Rallis which is expected to show good performance due to good monsoon which will add to margins further improving ROCE.
Sales of urea plant will help to retire much debt at standalone level and increase bottom-line which will further improve return ratios of company.
Pulses and spices market is highly unorganised and this could help to have higher growth in future .

Some risks include :
Low promoter holding
Inorganic chemicals showing mature growth so may be not much upside
Pulses and others segment is a small segment ,thus showing higher growth on small base which is being over hyped(as it contributes only 3% to total revenues) ,this growth need to tracked closely in future.

Disc - Not invested , was looking to opportunity to learn more about it .a novice investor and recently started putting posts on Vp
Other Vp members an give their insights regarding risks and concerns in this story .

Whats the impact of this policy change on Tata Chemicals ? Comments invited.

The following two proposed changes are landmark in nature and will surely help TCL aspiration to become a leading players in pulses:

Some good development in Tata chemicals

Disclosure : Invested and planning to add on Dips for long term.

Completion of acquisition of Allied Silica:

You can use the latest result from BSE site to get all details or you can use screener.

The company has an extraordinary income, hence earning looks skewed.

Some interesting links showing the transformation happening at Tata Chemicals 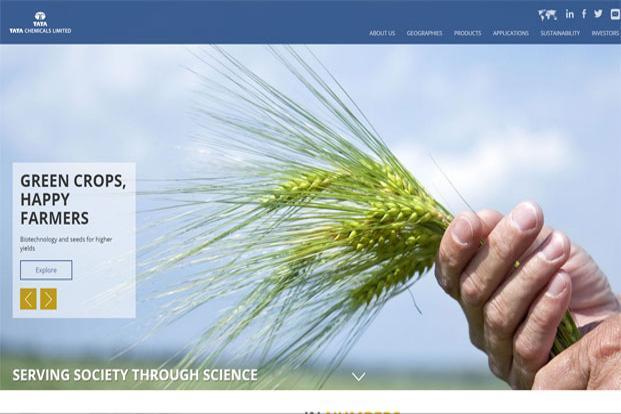 I am new to ValuePickr and the stock market. Can someone please help me to understand the below points.

If we take the example of TATACHEM then most of the FIIs and DIIs are bullish on this stock (Total holding 46%).

Financial Ratios (as per screener.in)

Can someone help me to understand/analyse the reason of the vast FII/DII holding inspite of low ROE and ROCE?

> Is this because of low EVEBIT ratio or high BOOK VALUE, EPS and EARNING YIELD?

At the recent AGM, the Tata Group chairman said the company's focus would be to scale up its businesses within India while exiting loss-making subsidiaries.

Can anyone help me to understand the above point…

Can someone help me to understand/analyse the reason of the vast FII/DII holding inspite of low ROE and ROCE?

Is this because of low EVEBIT ratio or high BOOK VALUE, EPS and EARNING YIELD?

Disclosure Invested so views are bias
Thanks
Ashit

I think you are right. Institutions are bullish on this stock because of furure prospects and exepected growth.

Governor Lenku orders for closure of Tata Chemicals in Magadi