Sadhana nitro :a Dog or a Horse?

Shareholding norms are being updated. It will now be required for Public Listed entities to have 35% as free float i.e. non-promoter shares. So expect some 10% shares to be released by the promoter sometime soon. Do not think it will prevent these guys, deserving as they may be, skimming the profits at the expense of the minority. This is going to be a long game for decent value growth.

FINANCIAL RESULT FOR THE QUARTER & HALF YEAR ENDED SEPTEMBER 30, 2019

The stock has risen a lot in the last month and I am unable to understand the reasons why. One guess: Is the US-China trade deal positive for the company? Any update on the reasons behind the current surge in the stock price would be useful. 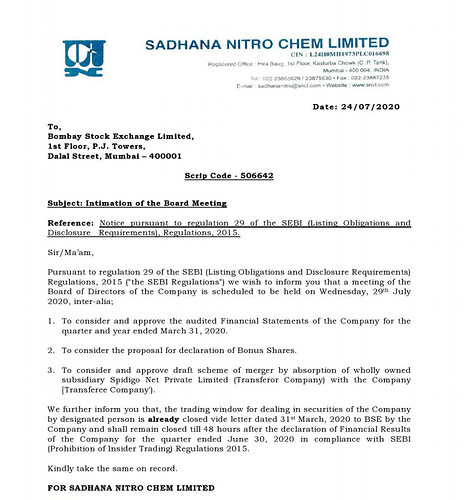 Any research update on the company

SNCL was supposed to start operations for a greenfield project of manufacturing PAP from Nitro Benzene route in May’21, however, there are no signs of it. They received approval under PLI scheme for making 36000 MT of the PAP.

Anybody has any update there?

In the recent results Sadhana Nitro has announced Completion of the PAP Plant.
"The Para Aminophenol (PAP) plant construction has been completed. Electrical Trials are
starting this week. This will be followed by water run trials. On Conclusion of the water run
trials, the plant will start commercial production. "

This can be turnaround for this company 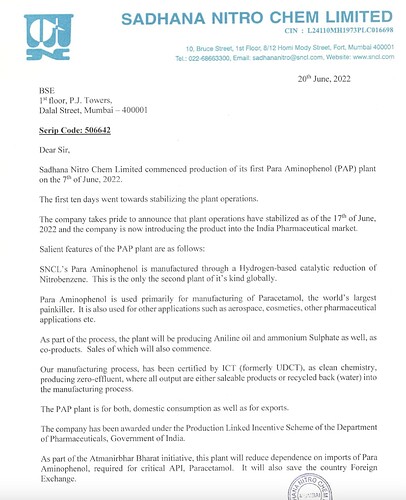 This is the Same route which Vinati failed to develope.

Only second company in the world to develop this