Pix is market leader in the non-OEM segment and Agricultural segment based on this thread at least . Do you have any data to prove that it is not?
Did you check what the gross margins of Balkrishna were when it had a marketcap as Pix has now? Please provide those details as well so that the community can benefit from your observations .

Disc: Not invested in Pix

This Pix v/s Balkrishna debate is meaningless. I am interested in Pix as a potential investment and I feel there is a tendency to overhype certain stocks.

Anyway what is more important to analyse is what are sustainable long term EBITDA margins of Pix.

Pre Covid EBITDA margins in FY19 and FY20 was 20%. It shot up to 30% in FY21 and was 26% in FY22. You will see this trend in a number of commodity processors- for example plastic pipe companies or rubber or faux rubber processors like Balkrishna and Pix.

This is because as raw material prices go up companies make inventory gains. Further, let say you mark up prices by 10% over cost. If commodity prices go up your cost goes up and so the same 10% will end up giving your higher EBITDA/kg of product sold.

Since August/ September most commodity prices are falling. So first you have inventory losses which compress margins and then 10% of cost will yield lower absolute EBITDA.

If you notice Pix quarterly numbers there is no EBITDA growth YoY since September 2021 quarter even though sales is growing YoY.

Sales growth is coming due to Price hikes. Co is going through a capacity constraint. New capacity goes live from September onwards. Thus, the topline growth is a function of realizations and not volumes. 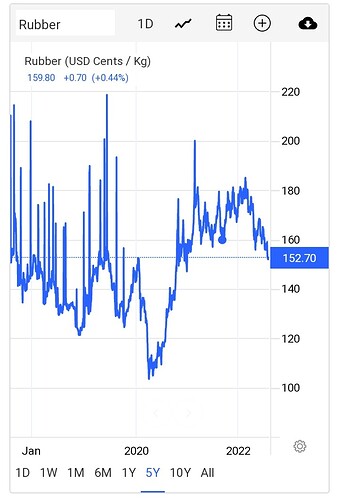 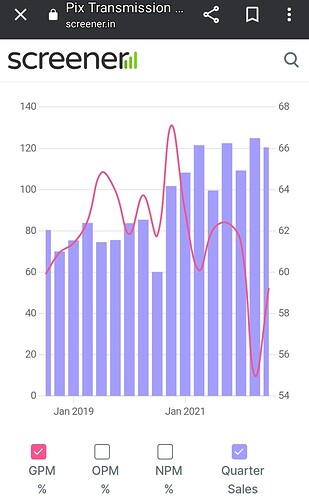 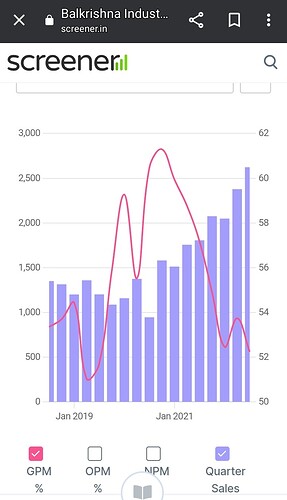 Screenshot_20220806-132350_Chrome720×1253 81.8 KB
To me it looks like both are similary affected GM wise and sales have increased for both but on different scale.While BKT deserves its esteem,PIX has also done well.
Also,in this thread,the discussion is about whether PIX can become better and become like BKT ,not that it already is.There are capexes which will in near future help them in increasing volumes and hence all the discussions.To me it looks like that those discussions are based on data points and adds more value to the thread than generic ill substantiated observations on commodity price.
I was also looking at PIX and have not been convinced enough about its potentialities because probably current price bakes in a lot of tangible future developments.But atleast I now know which contributors can be trusted and which not .
10 Likes
RajeevJ August 6, 2022, 7:04pm #280

Pix came out with a decent set of Q1 numbers. What is most heartening, are the growing Sales of 120.31 Crs., a growth of 21% over Q1 of last year. This despite plant not working at optimum capacity due to the simultaneous expansion being carried out in the same premises. The Co. is well on its way to doing 600 crs of Sales in the current year.

Let us ignore the high other income of 6.32 Crs. for the current qtr. as it inflates profits & complicates matters!

The Gross margins are well on their way to normalcy. The Cost of Sales is down to 40.76% in Q1 as opposed to 45% in the previous Q4, which was 39.86% for the whole of PY 21-22. This should fall further in the coming qtrs. This means that the high raw material costs of Q4 are to a large extent being passed on. With falling commodity prices, they should get back to normal sooner than earlier anticipated.

What has perhaps upset a few investors is the further fall in operating margins in Q1 to 21%. This is due to the steep hike in employee cost, up from 22.18 crs in previous qtr to 28.54 crs. Employee cost unfortunately is loaded at the front end, as it is increased at the beginning of the year. Its impact will not be felt as much for the year as a whole as Sales grow to about 600 crs. I suspect, for the full year. as a percentage of sales & profits, the employee cost will be at about the same level as last year. If only mgts. take their annual salary hikes in Q3 or Q4, this would not be felt as much!

So all in all, things are moving in the right direction. Pix has created enormous shareholder value over the last 2-3 years, and I feel the party is a long way from getting over. With booming exports, growth looks more predictable now than it did three years ago. So keep the faith guys!! 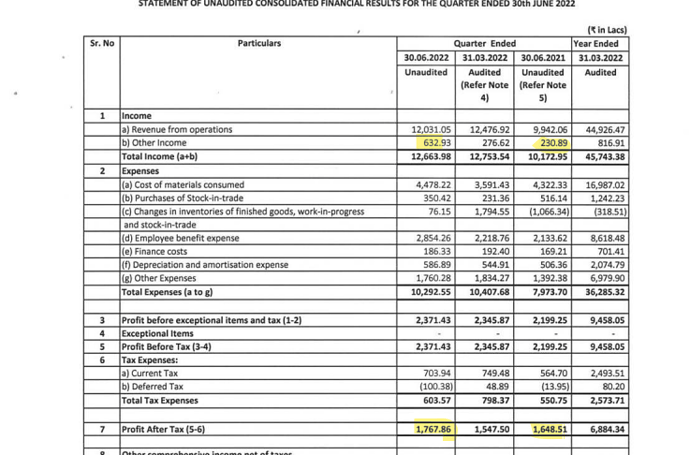 please feel free to correct me if i missed something here 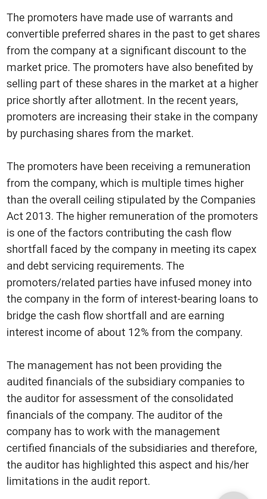