i recently analysed the MOIL IPO on my blog at : http://thriftyinvestor.blogspot.com/2010/12/moil-ipo-analysis.html

I believe it has the makings of a good long term bet rather than just a buy for Listing gains.The following is my analysis: 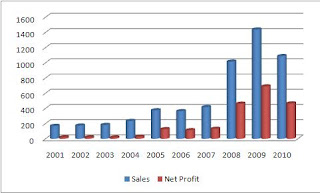 This can be understood better when looked at with the physical production of Manganese ore & the Cost realization(`000)/Tonne as shown in the chart below from 2001-2010.While the Managnese production grew by just 5.9% CAGR the Price/tonne went up by 24.03% CAGR during the same period. MOIL due to its dominance & quality ore made most of this boom. However the demand grew so much that India was a net Importer of Manganese in the last 3 years. 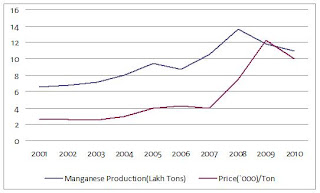 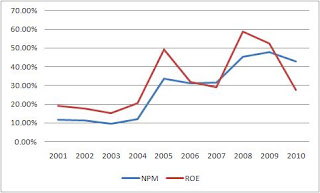 I had the cash flow data of MOIL for only the past 5 years during which it exhibited excellent cash flows and healthy Free cash flow. The chart below shows the Free Cash Flows and net profits between 2006-2010. With the kind of Free cash MOIL has been able to generate one can be rest assured that it will have no problems paying dividends & the cash balance is likely to grow in the future . 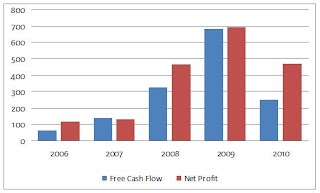 Considering the amazing response the Issue has already seen its safe to assume that the price will be fixed at upper band of Rs 375 which translates to a price of Rs 356.25 for Retail Investors after the 5% discount. This translates to a Market Cap of 5985 Crs,however due to the 1763 Crs Cash on books the actual value of the company turns out to be 4222Crs . The table below shows the various important valuation metrics for TTM & 3,5,10 Year averages wherever data was available.

MOIL looks attractively priced whichever way one looks at it on absolute terms. Especially on Trailing Twelve Months(FY10) & 3yrs avg basis it looks quite cheap for a company with such high ROE and growth. Its important to look at average valuations also as this is essentially a commodity company which is cyclical in nature. It looks reasonably priced even w.r.t. 5yr avg considering the past growth it has had. On a relative basis there is no comparable competitor in India, however MOIL is cheaper than other mining companies like CIL,NMDC,OMDC,Sandur Manganese etc. Globally, Citic a direct peer of MOIL got listed in November in Hong Kong at a P/E of 42 & P/BV of 7. Further when compared to other Global Mining biggies who have lower margins than MOIL it still appears attractively.

I think MOIL at current price of around 400 looks good on medium term investment perspective.

The post IPO selling by disappointed investors seems to have dissipated at around 375 levels.

Its difficult to value such stocks because since it is a sort of monopoly, one never knows where it can go once it catches market fancy. I think it could follow a similar path to coal india wherein all the selling subsided around 300 odd levels and since then the stock has looked extremely strong.

Current price 343. Not too sure why it has corrected so strongly.

It looks attractive to me as a business, and Siddharth’s valuation covers almost everything. The final parameter that I usually look at, the price is also very interesting.

Feedback from a senior investor. Unless you are on top of the commodity sector, you should play cautious, try and track price movements - and that can be difficult for industry outsiders.

_as indicated in one of my weekly update , price realisation has fallen in this sector over last two qtrs.

current qtr it is still lower this is likely to affect bottom line .

stock price too has fallen in line with the above ._

I don’t believe this is another run of the mill commodity play. While Commodities all around have crashed, MOIl too has been impacted. But with a virtual Monopoly, if the amount of steel produced & used in the country in 2015 is going to be much greater than what it is today, MOIL will sell more Manganese & make more money ,a s simple as that. It has a very strong balance sheet & cash flows & i believe this can be the next NMDC/Sesa Goa(which have been gr8 wealth generators in the past decade). Trying to call the commodity cycle can be tough(i have no clue about it). If one can take a more Long term view & envision the profits, i think its going quite cheap today.

I bought it at 535 today its 303 can i buy more at this level Pls let me have your view. I am long term investor can wait at least 5 years.

The problem with MOIL is two fold

2.Historical downturn in metal market is due, after slowdown in China.

Source of 1. I heard interview of MOIL Management.

Hey I was having a look on sandur managense. I heard in an interview of UR archarya that Manganese demand will boost 20% Yoy. Also he said that EV will use more steel and hence more managanese.
However I find it opposite. Ev to be more lightweight and there should not be any incremental use of steel compared to today’s scenario.
I did’nt undersatand why he has not taken into account the manganese demand of being used into making batteries. Nissan leaf used 100% manganese apart from lithium.
Whats your view?

If steel demand picks up manganese will pick up too (used as an additive). Also, electric cars have a higher component of manganese due to batteries.

I think Sandur has managed the demand better and has more profit increase. May be MOIL will catch up and have a bigger gain. I would be buying both, haven’t decided the percentage mix.

Does anyone have more conviction on either of these 2 stocks?

I continue to be hopeful on MOIL. At the end of Q2F18 I partially booked profit (when it seemed to have run up a bit), but accumulated again last month when it was in the 180s. The next year or so looks good, as per the HDFC report or private discussion with a couple of mining engineers. The company may not be a steady compounder, but the cash position is pretty good, and they are perhaps going for an alloy plant. Although it may not be a great idea for a mining company to get into alloy plant operations, the thing to take from them is their comfort and confidence. I will watch a few more quarters.

I beg to differ. It makes immense sense for a mining company to get into alloy production.

The various expansion projects are running on schedule (as seen in their corporate presentation) and we will start seeing the production ramp up from FY 20. If Mn prices remain firm, it will become a money spinner.
Regards

Don’t fit in either of the baskets. Not a screaming undervalued stock neither a value buy. Let’s talk about both of them: 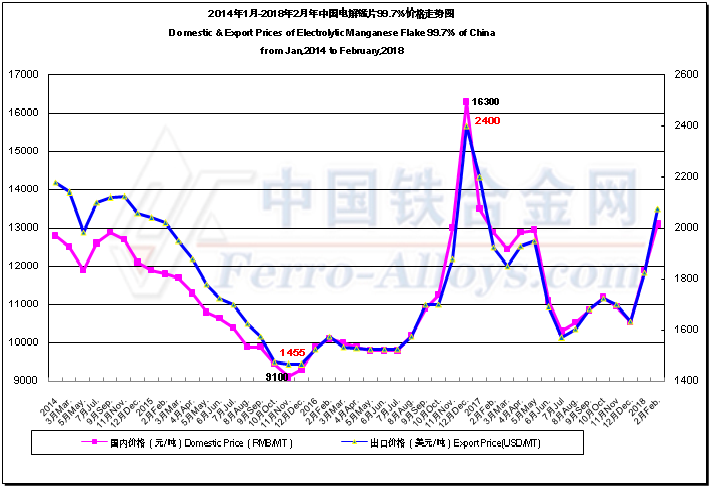 tA2yZvIkuuIDUjrH4aDSE5wB-_ekUgW8gJ-cH0O2vm5RYBNZ2L9LXo6_3PcmEObuvbjCGJ94mfgKDbKsD2E8bPwhT4iCX17hJBgMrYcf-nUz_d1HyPo-h1X_Y2SZUXzfWsizNG_x711×497
In 2016 the manganese ore prices dropped significantly. Now, Let’s look at the valuation and financials of the company in 2016:

If you look at the cash flow numbers of FY16: (Profits from operations - Taxes paid) is a negative number. So in worst times, the company may end up losing some money.
I provided enough points which tell you that it doesn’t a value buy at this price point. According to Graham first thing to look while investing is the safety of principal or you may know it as the margin of safety. Everything comes after that.

Its trading at 4 times EV/EBITDA of its historical average EBITDA. Company has generated good EBITDA except FY16. If we assume manganese demand rises due to electric vehicle, is it not available cheap ?

4 times EV/EBITDA is cheap only when EBITDA will sustain there. I don’t think it will.
About the rising demand due to electric vehicle - I can’t buy a stock in hope that some technology will come and create huge demand for some industry. I am not a venture capitalist. And even if you want to bet on electric vehicles then you should be looking at tyre companies - If the demand rise because of replacement of old vehicles then it will be a tailwind if not then the business will grow at the same speed.

I think mining lease renewals is a big uncertainty.
Especially in the light of what is happening to NMDC.

Many mining leases of MOIL are expiring in 2020-2022 period.
Do not know whether they will be renewed or auctioned.

Can someone please through some light on this?

Now, what I understand is that every listed entity needs to disclose the Cash flow statement every 6 months and definitely with its annual results. However, the cash flow statement is missing in the above result announcement.

Is my above assumption correct? If correct, then what may justify not providing a statement of cash flow.