While putting up research reports prepared by other advisories/brokerages or other entities, it is pertinent to verify whether it is permissible to put up the reports on VP. We have had issues in the past where reports meant for private circulation were put up on VP and there were objections to the same. So please do not put up report files. You can give a gist of what the report says in your own words which I think will not infringe any boundaries.

Some charts below (source: valueresearchonline.com) 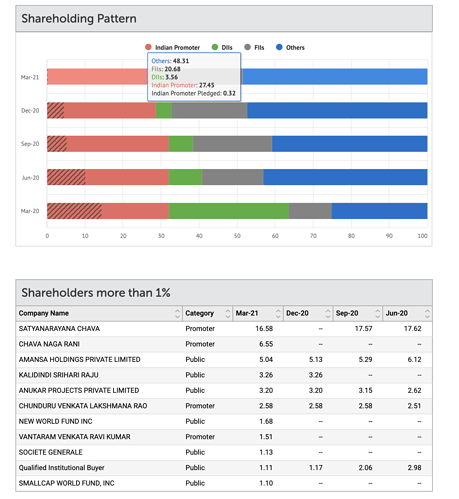 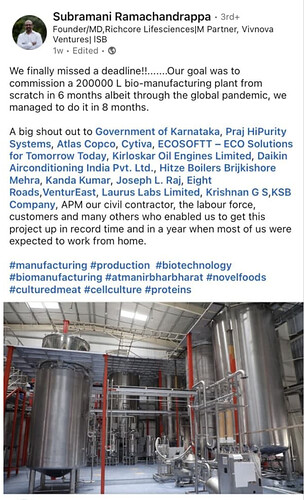 Just to avoid the confusion about the source of this info. this is posted by MD himself on his personal Linked in page , please check here

I didn’t break this news

I thought it would be interesting to compare the results with the interview that Dr. Chava gave a few months ago.

1. Growth in antiviral API vs growth in oncology revenues - outlook 5 years down the line: 1

To diversify, we need time. We went from a one product company to today over fifteen years.
Today, 50% of revenues is API, 40% from formulations. In the next five years, our API business will be roughly 40%, 40% from formulations, and 20% synthesis. Long road ahead in formulations and synthesis. It’s going to be our biggest division.
Five years from now, people are going to think we’re a diversified company. From antivirals, it’ll shift to anti-diabetics and others. Significant growth ahead. 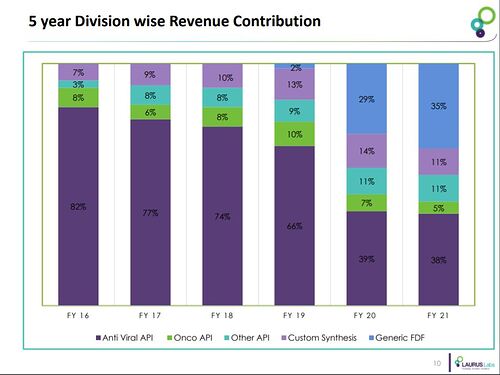 The growth in formulations in the last three years is impressive, and the results are exactly in line with Dr. Chava’s claims.

Products are cyclical depending on customer demands. Huge numbers expected in Q4. Margins expected to remain high despite significant growth.
Our focus is on R&D, strengthening the leadership team.
We have all the abilities to scale up significantly in the next five years. In the API business, in the oncology business with new CapEx. Our new subsidiary Laurus Bio has scope for significant growth. We’re continuously investing in infrastructure.

Margins have remained at 34%, we’ve seen consistent gains on revenue, and they’ve attached the following page in their investor presentation regarding plans for FY22 onwards: 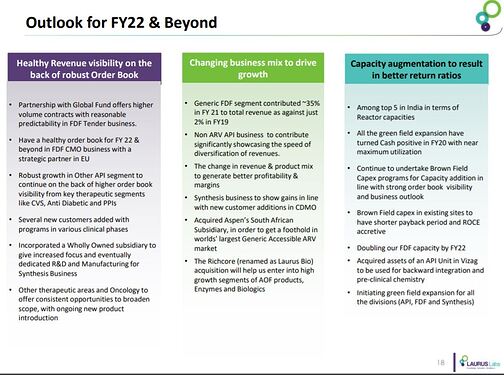 During the interview, Dr. Chava also said that the new CapEx is not exploratory, but they know exactly whom to sell to, and the quantities they have to produce. It’s also worth noting that despite the significant growth in FDFs since FY19, they want to double capacity by FY22. There’s a lot to unpack and the conference call should allow them to explain all of this in detail.

Edit: A lot of this was also said much earlier in Q1FYF1, discussed above in this post, linked for reference.

On the consolidated Balance Sheet, Goodwill has jumped 2500% from 9.74cr to 246.3cr in one year. Based on my accounting classes (last taken in college) I know goodwill is used as a parking measure to balance the mismatch between assets vs liabilities.

Are there any accountants / CAs here in this thread who can help decipher what makes up for this 246 cr?

US GAAP and IRFS Accounting measures requires substantiation of the goodwill in books, but I couldn’t find any mention of goodwill in the auditors report. I am not very familiar with Indian Accounting Standards.

My assumption is this is due to the various acquisitions made by the company during last year. They mentioned acquiring several companies apart from Richcore and even merging a few of their US entities.

If any CA / Accountant on this thread can help, would be great.
Also, does anyone know where can I find impairment of goodwill report? Will it be in the upcoming annual report. There was no mention of goodwill impairment in the latest audit report.

Goodwill is what you paid over the fair value of business acquired (assets less liabilities) and it will be amortised yearly to profit & loss. It is also tested for impairment every year.

Thank you Rakesh. Does the impairment of goodwill report gets published as part of annual report?

what you paid over the fair value of business acquired (

That’s what I thought, today’s press release shows a long list of many internal mergers and consolidations along apart from the acquisition of Richcore. These may be the source of the increase in goodwill.

Just wanted to check if there is any way to confirm this and what part of annual report should one look to get more details.

If there is reasons exists for impairment then it will charged in profit & loss account. In the given case there isn’t any impairment because auditor doesn’t find any factors/reasons that fair value of business acquired is less than the actual net asset acquired.
I don’t think there is any requirement to share impairment report in annual report.

This is the excess amount paid for Richcore when compared to what was accounting equity.

Recently I read that Laurus founders have released their pledged shares but the screener shows that promoter holding is continuing to drop. Also, DII’s are reducing their holdings! Any thoughts?

Satyanarayana Chava has reduced his stake by 1%

Richcore was acquired for 243 crore. So this amount being paid more than the book value, the difference in my understanding is the goodwill. But the goodwill itself has jumped from 9 cr to 246 cr. It doesnt seem to be from Richcore acquisition alone. Am I missing something here?

Kalidindi Srihari Raju who was earlier classified as a promoter is now classified under public.

That’s the reason for the big drop. Otherwise the reducing is only due to selling to release pledge shares.

Any idea or reasoning why trade receivables spiked up significantly in the balance sheet? Is it a red flag?

The accounts receivable to sales ratio has bettered over the years. More or less in same lines with Divis.

There is spike in inventory and trade payables as well. Let’s see what management has to say? 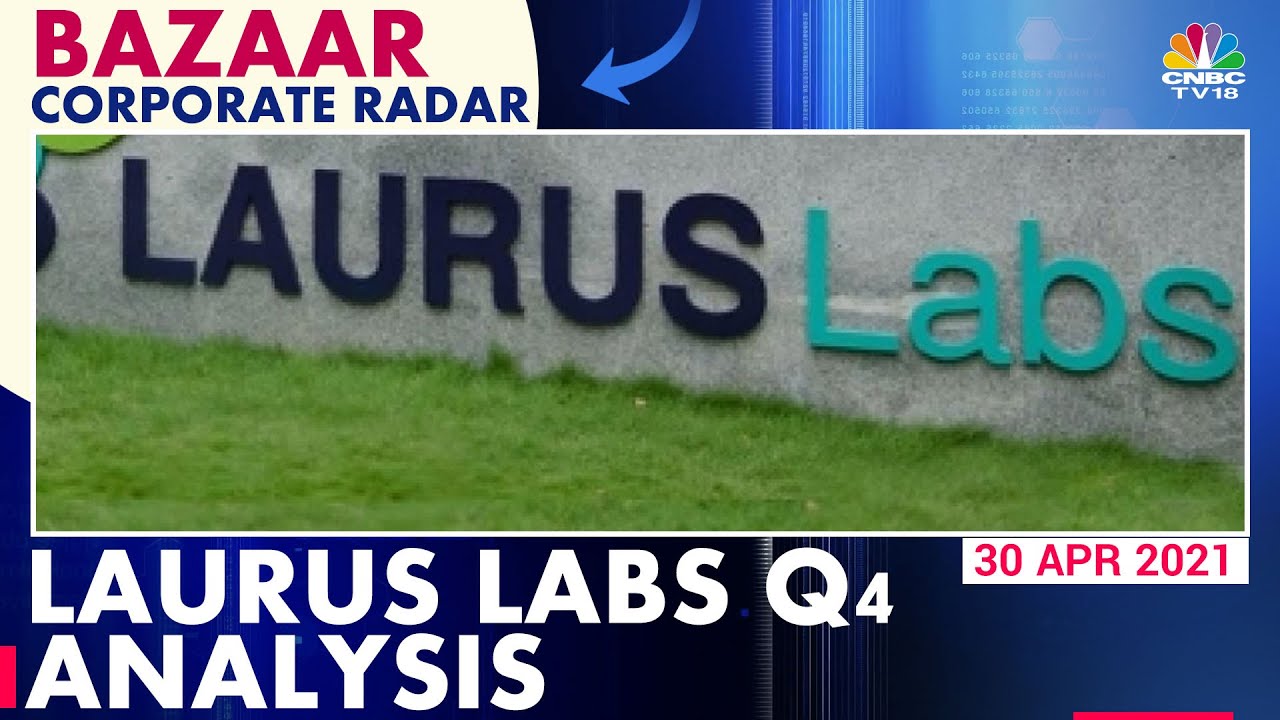 The Company has replied saying that the increase in Good will is only on account of acquisition of Richcore.

While I have no reasons to doubt anything as the books are audited by Delloite, but would like if anyone can explain from academic point this transaction. If I have paid 240 Crores (Approx) for 73% stake in a company, how can the goodwill alone from this transaction be more or less the same amount ?

Hi all, I have only recently started tracking Laurus and am kind of overwhelmed with all the positive commentary on various threads, on the internet, and almost everywhere I look. Laurus Labs seems to have become a consensus investment. And it is hard to refute any of the arguments in favour of Laurus having an exteded runway for rapid growth, and Dr Chava seems to be delivering what he has promised.

What I don’t understand is that given this sentiment around the stock, why is it that there is such a large free float? Why are over 40% shares still with retailers and why are institutions not lining up to buy? What are the risks that could derail the thesis?

I believe that if it walks like a duck, if it quacks like a duck, it is a duck. In this case Laurus seems like a no brainer winner. And everyone everywhere seems to believe so in this case. But then why do the ownership numbers not reflect this confidence?

Apologies if someone feels this is off topic, but it is somthing that has been bothering me for a while and I don’t know where else to look for an answer. I will delete this if flagged, ofcourse.

Totally not qualified to answer, but the answer seems obvious (like the duck):