I entered stock market during the end of May '20 after observing the market movements for over an year in sidelines since the start of early 2019. Started doing mostly swing/positional trading and made a return of around 35% CAGR in the last 8-9 months, even though i was a bit away from markets during Nov '20 and Jan '21. After doing my research, i have shortlisted around 17 companies (mostly mid and smallcap) that i would like to invest for the next 5 years with an expectation of around 20-22% CAGR. I have purchased 11 of the 17 stocks and waiting for the other 6 stocks to come to their support levels. I’m a medium to high risk taker with the expectation of a high return and planning to pyramid in the winners from the below list. 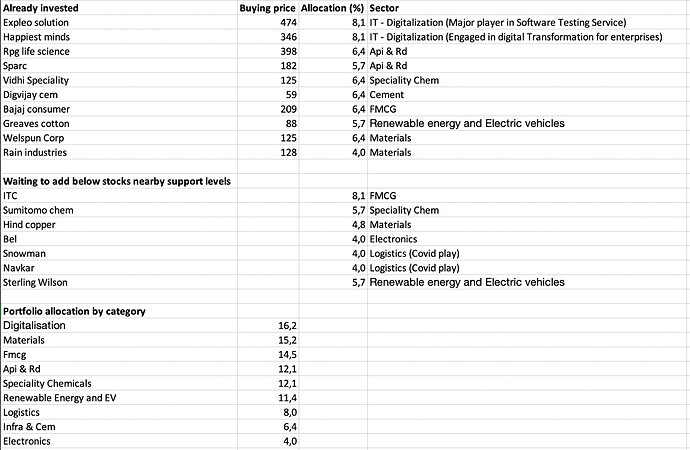 Your experienced, valuable suggestions are much welcome! Thanks in advance

Avoid PSUs.
Minority shareholders are not priority of PSUs

Sterling at present has lot of issues

Good suggestion. I really wanted to avoid PSUs as well. But if we look closer, Hindustan Copper as Copper prices are getting expensive. So, want to play the commodity cycle (Risky bet). Great result this quarter. Turn around from loss to profit. Hence, the conviction.
With respect to BEL, huge order book, debt free, consistent ROCE above 23% in the last 4-5 years.

I’m still yet to enter both the stocks though. So, can definitely think about alternatives. Please feel free to suggest a few

Yes, one thing that made me look away from Sterling Wilson is the promoter group. Got a lot of mixed opinions about Shapoorji Pallonji from a lot of folks around. But, my conviction is that Renewable energy could play a great role and this company could get hugely benefitted and command higher valuations in the future.

Karthik,
Since you are from IT sector, I have few questions?

Also, your portfolio strategy seems to be inclined towards trend investing. Trend investing can be very much rewarding if you have time to monitor your portfolio frequently and also have a sound knowledge on technicals and fundamentals. So, instead of planning to invest for x years, remain steadfast to prune/raise positions as per you convictions.

Both the companies have one theme in common - “Digitalization”… Both are into the new… Happiest minds is focused on digital transformation, cloud infrastructure, big data, Robotic Process automation, security and acquiring those companies while Expleo Solutions is focused on testing those “new” things along with the traditional testing.

Expleo:
When it comes to testing, there are traditional testing methods and there is new age testing methods, which is primarily led by specialists testing and automation testing and AI led testing. These segments are growing at a decent pace. As per Gartner reports, specialized testing or the new age testing servicing is growing at almost 13% CAGR (would likely reach 16-20% in a few years time), while the traditional testing is growing at around 1.5% to 2% CAGR. That comes around 15% CAGR for now (expecting 20-23% CAGR in 2-3 years). Their testing focuses on “Digital”…around Mobile, AI-based automation, User experience (UX) and other cognitive capabilities like Robotics Process Automation (RPA).
Arrival of Mr. Rajesh Krishnamurthy (ex-infoscion like me) as the new CEO. He was an integral part of engineering, quality and consulting services across Europe and Expleo wants to retain their base in Europe after having a drop of around 6% last year from 68 to 62% and wants to expand in US (currently just 3% presence). So its a bit of betting on the jockey as well. Possibility of a buyback after Q4 results as per MD in latest concall. Double digit growth expected in Q1.
Trading at cheaper valuations to its peers by a decent margin. Corrected almost 30% from the top since the last few months. The management intends to double revenues in 3 years to 100 million USD , with an estimated net profit of ₹110-120 Cr …that would give the company an EPS of around ₹110-120 and share price would go up north. But I would assume this is probably improbable at this stage.
Even though the company appears to have a niche in testing, there is nothing stopping from the big players gaining more market share. Would be more of different customer base that the biggies and this company can acquire.

Happiest minds:
It is an aggressive digital services company. Strong promoter with industry Veteran, Ashok Soota (trusting the jockey again). As per their MD in one of the interviews, they are expecting 21-23% CAGR for FY22. Valuations are definitely high at the moment…so is the ROCE % (43%) and ROE % (83%) . Paying premium price because of that. Needs to be closely observed as the ROCE % and ROE % might not be sustainable.

I’ve been doing swing trading mostly using technical analysis and I spend at least 30 mins every working day to monitor the stocks. That’s why ok to take bit higher risks.

You caught me with my idea of Trend investing.

As soon as I feel the company doesn’t perform well to my expectations, I would cut it out and then bring in a new stock. No emotions whatsoever.

Since you mention about renewable energy and Sterling and Wilson I feel it is a good bet in near future as they are one of the largest EPC sector for renewable energy.
You can also look at Borosil Renewable

Even though the company appears to have a niche in testing, there is nothing stopping from the big players gaining more market share. Would be more of different customer base that the biggies and this company can acquire.

Thanks for the nice brief on Expleo. Normally in any kind of B2B project business Big players acquire large deals and small players acquire the small deals. And that ultimately translates into large market share of biggies. However, if I have to trust Expleo management’s word & Nelson Hall’s report that Expleo is a “leader in next generation software testing services”, then that means that the Next Generation specialized testing is market is too small for Big Players to enter currently, and they are focused on the traditional testing only. Only when the market size for Next Gen Testing broadens Big players like Infosys can start taking away market share.

Can you confirm this as you seem to work for Infosys?

Valuations are definitely high at the moment…so is the ROCE % (43%) and ROE % (83%) . Paying premium price because of that. Needs to be closely observed as the ROCE % and ROE % might not be sustainable.

Normally when the valuation is high, further price movement happens only due to bottom-line growth. Also, there are chances of derating in case market gets disappointed due to some reason. As per the KRChoksey initiating coverage report "Key risks include street perception of Ashok Soota as the key driver for the company, and any development on him not continuing his relationship with HMT, be it in the form of retirement or any other manner, would impact the stock adversely. "

My suggestion would be to research on some other small cap IT firms. One name I track is R Systems International.

Btw, Be careful about SPARC. It is not an API company. It is a pure drug discovery innovator (not CDMO) company, and extreme high risk - high reward bet. It is not even trend investing as the outcome is extremely uncertain. Suggest you to switch to other reliable bets like Neuland Labs, Sequent Scientific, Suven Pharma etc., in case you want to replace it with other biotech farms.

I can confirm the first point to my knowledge. I used to work in Infosys a while ago. Now in another co.

With respect to HMT, I would likely sell it once Ashok Soota retires/quits. Will check on R Systems International. Thanks for that.

Very true with Sparc. Expecting this quarter result to be good. Needs a close watch. I will look into NL, SS, SP as you suggest. Sequent Scientific is one i have researched a bit and liked its model. Let me dig deep.

Thanks for your valuable inputs.

Was going through Laurus Labs. Another great quarter with acquisition of Richcore and naming it Laurus Bio. Do you think its a good idea to start adding Laurus Labs from this level? Can this be the next Divi’s Lab by getting a 1Lakh crore mcap in the next few years?

Can this be the next Divi’s Lab by getting a 1Lakh crore mcap in the next few years?

@abhijain Divis has largely remained only an API player. Whereas Laurus has besides APIs moved into formulations, biologicals, and synthesis divisions. I do not know whether it is a good thing or a bad thing, but till now formulation has helped Laurus in showing very strong and profitable growth. Plus it also increases the opportunity size, being in adjacent businesses. Whether Laurus can repeat Divi’s feat is something only time will tell. But one pointer from history is that after a few y…

@fundoo Laurus has a remarkable track record in terms of both topline and bottomline growth over past few quarters. Its rare to find companies which can show such fast growth. Usually maximum money in a stock’s journey is made during its fast growth phase. Usually there is strong disbelief when a company grows so fast. The usual queries raised are those related to cash flows, balance sheet issues, or promoter issues. The other question vexing investors in such growth stories is how long i…

Not a recommendation. Invested in both

Btw u have no financial ( bank / nbfc/ insurance) stocks in portfolio??

Waiting to enter into Laurus Lab. Need to study Granules India. Studying a few financials at the moment. Also NPAs are the concern. That’s why haven’t added any so far.

Yes NPA are an issue. Stay with sector leaders.

Not a buy recommendation. Keep a track

Sure, thanks for the suggestions. Having a hard time in choosing the best IT companies to invest (except for the obvious biggies). Today IT sector performed and Expleo didn’t (as usual). HDFC bank, HDFC life already studying. Will check on BF and MF as well.

I hold Infosy and Coforge. And in Technology Affle and Route Mobile.
Tracking LTTS and Persistent System .
I like holding evergreen stock which are consistent compounders .

I know stocks like expleo solutions ltd , Ramco System, saksoft, tata elxsi, intellect design arena , nucleus software ,cyient etc all have given great returns in las 9-12 months
But just check their past performance u will get more clear picture.
Wen I checked in 2015 all these were up same way and after that their fall was horrifying .
Eg . in 8 jan 2016- expleo solution was 1281/-

So beware of Fast moving stocks only based on liquidity, emotions and in bull run.
That’s y I prefer to stay with quality. As first rule of investing is protecting your capital.
I’m not an expert in IT but expressed what I understood abt Stocks moments n it’s fall during and after bull run.

You’re spot on. For expleo, i have other reasons like new management, good commentary combined with a vision of EPS of Rs.110-120 in 3 years. The old management didn’t spend their money well. Wanted to get in Persistent, Cyient, HCL,…certainly missed the bus there. HCL looking cheaper comparing to top IT companies… thinking of add that.