As per the AR, the great monsoon season turned out to be ‘too good’, reducing crop yields, reducing maize qualities, disrupting the maize market, increasing the maize prices to Rs 24/KG and thereby reducing the company’s sales volumes. This demonstrates the importance of weather on the company’s fortunes. The capex plans for the malda plant are going as per plans. The company reduced debt due to lower WC utilization and also using internal accruals.

As per the management the biggest risk to the business is Raw Material prices, which is my own assessment as well. GAEL is definitely executing very well. Would be reasonable to call it the most efficient/profitable maize processing company in India. The long gestation period contracts with oral care, FMCG and pharma companies act as some sort of a Moat for the company. However, the RM price should would always remain.

In their latest filing
“Company has acquired I00% Equity shares of Mohit Agro Commodities Processing Private Limited on 9th September, 2020, making it a wholly owned subsidiary of the Company”

Couple of things on this .

The promoter of MACPPL is also of promoter of Gujarat Ambuja Exports Limited and the acquisition would fall within the related party transaction.

Turnover of MACPPL of last 3 years is Nil

The acquired company could have fixed assets on which it may or may not be earning rental income. Wonder why this has not been clarified in the filing. Does anyone have some more understanding on this acquisition?

I also come from the same school of thought… a stock split adds virtually no value to the fundamentals of a company. That said, even the greatest investor os our times, Warren Buffet, had to succumb to whatever pressures he might have had to face, to finally allow his company Berkshire Hathway split the face value of its share. Warren Buffet too was strictly against splitting and on the theory of ‘a stock split will make a stock more affordable to retail investors’, he always believed that high share prices attract like-minded investors who are focused on long-term profits as opposed to short-term price movements.

While a company technically should not be interested in factors like trading volumes and stock prices etc., rarely do entrepreneur promoters be able to strictly follow that principle. And there’s nothing wrong even if they show interest, as long as they don’t resort to fraudulent practices in the interest of market cap gains. And this doesn’t seem to be the case with GAEL, in my opinion, and hence it shouldn’t bother investors a lot.

The acquired company could have fixed assets on which it may or may not be earning rental income. Wonder why this has not been clarified in the filing. Does anyone have some more understanding on this acquisition?

As much as i get to understand, the company has got the assets valued by an independent valuation company and done the transaction at arms length pricing. Mohit Agro, the group company which it has purchased 100%, owned some warehouses which was leased out to GAEL. So while the debate on ‘Own vs Lease’ could continue, especially given the sub optimal yields on owned properties (commercial or residential), a warehouse remains a strategic asset to a business like GAEL’s which may have prompted them to buy out the asset completely. So unless the value paid for acquiring Mohit Agro is significantly bigger than the actual value of the property, it shouldn’t bother us as much. 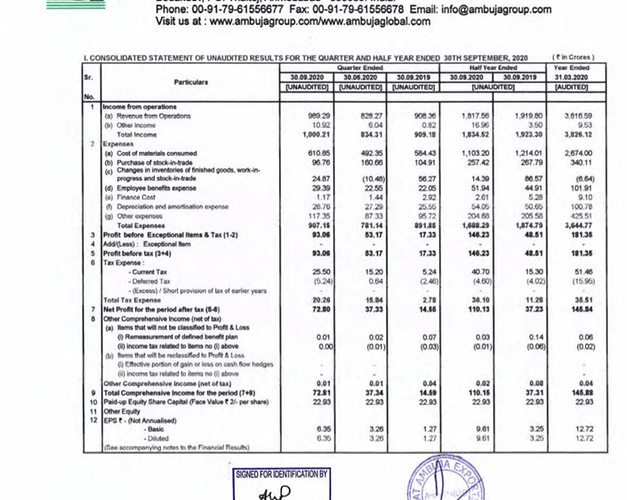 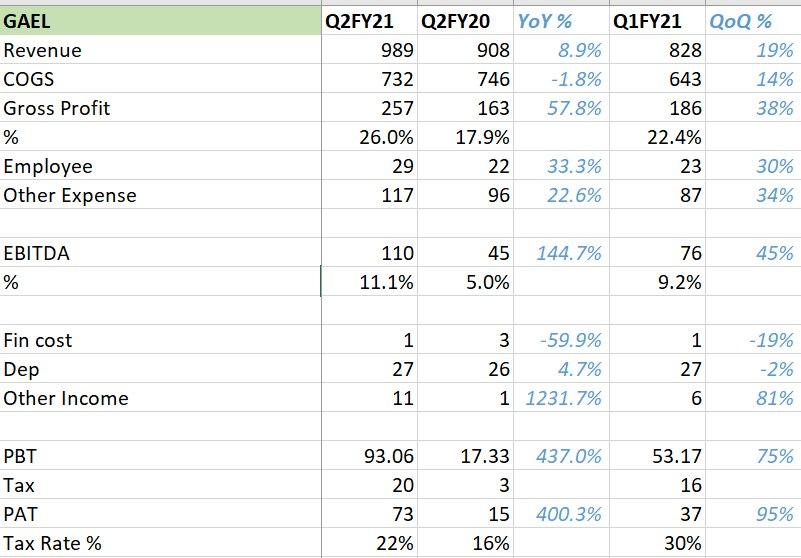 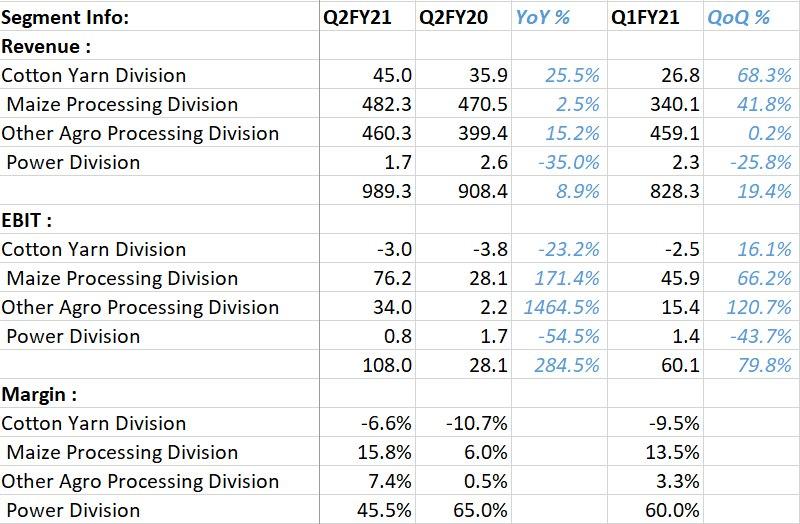 Any ideas why is the stock price down 5% even though the Q3 results are really good.

9 months profit is already 50% above 12 months profit of 146 cr. in 2020.
Improvement in margins by ~3%.
Expecting at least 75 cr. net profit in Q4, will double the EPS to 12 v/s 6 in 2020.
At PE of 15, the share price should cross at least 180 by results in May.21, a 40% jump in 4 months.
At this stage, stock price down probably indicates signs of desperation by traders for not accumulating enough !
It is a fundamentally stable business and will grow with new plants in newer areas / expansions from internal accruals.

Awaiting your similar comparison for Q3FY21 ! 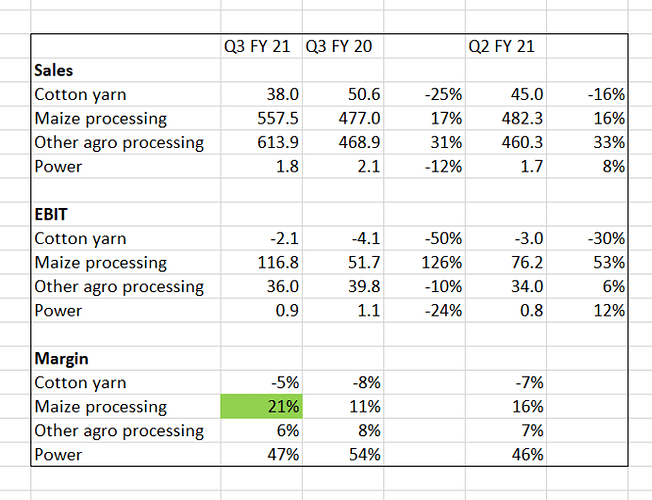 Q4 Results for GAEL declared:
Maize segment’s EBIT margin at healthy 18.4% (though dropped from 20.9% QoQ)
Agro Processing has generated an EBIT of 80 Cr and textile has turned back into green.

Revenue flat, EBIT has doubled. (Maize price hike issue in last FY). Margins at 18% - highest in last 5 years. Business back on track after a blip last year. Planned capex in Malda (likely completion by year end); should increase revenue by 600 cr, as per guidance given by mgmt. CWIP of 106 Cr vs 12 Cr.

Segment has sprung a positive surprise, surpassing maize with higher contribution to overall revenue. Healthy growth in revenue and EBIT.

Muted numbers, though EBIT has turned into green after 3 years 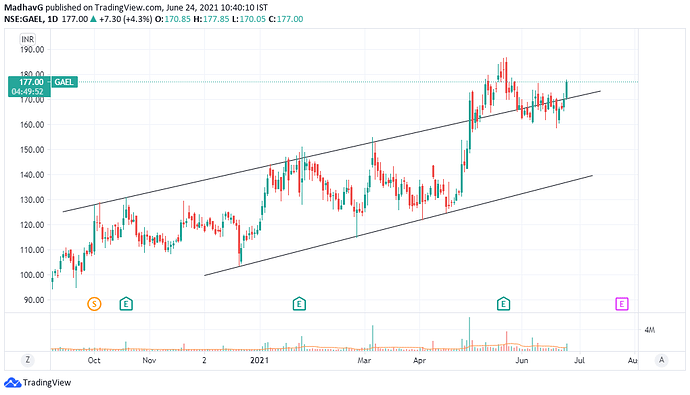 Any idea why has company approved an enabling provision to raise 1000 Cr - thought company has sufficient internal accruals for expansion.