Fairfax India - an alternative to nifty 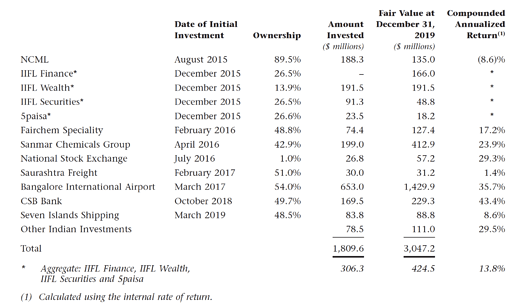 They invest in both listed and unlisted entities. Their largest investment is in Bangalore International airport, of which they hold 54% stake with the rest of stake with Siemens, Government of India and Government of Karnataka. Their original investment was $653mn in 2017 which has been recently valued at $1.35 bn (30.06.2020). They plan to list it by the end of 2021 at a target valuation of $3bn (implying their stake at $1.6bn).

Of their listed investments, the biggest one is in IIFL group ($22.3mn as on 30.06.2020) which was recently demerged. Other significant investments are in Fairchem Specialty (which will be de-merged into two units soon), Sanmar Chemicals group ($24mn as on 30.06.2020), CSB bank, 5Paisa, NSE, Seven Islands, etc.

They charge an advisory and investment fee of 1.5% on common shareholder equity + 0.5% of undeployed capital + 20% performance fee of increase in book value (including distributions) above simple interest of 5% increase in book value, chargeable every three years since inception in 2015. Basically, it looks like a classic hedge fund model (2 + 20). Their independent directors comprise Chris Hodgson, Alan Horn, Deepak Parekh, and Lauren Templeton.

Here is how the book value has evolved over time, and also how market has valued this company. 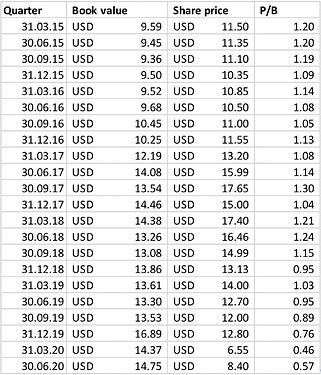 Disclosure: No investments as on date

This podcast covers Fairfax Africa really well, although not Fairfax India. Also, provides good insights into insurance operations of Fairfax and how the Fairfax group has evolved over time. 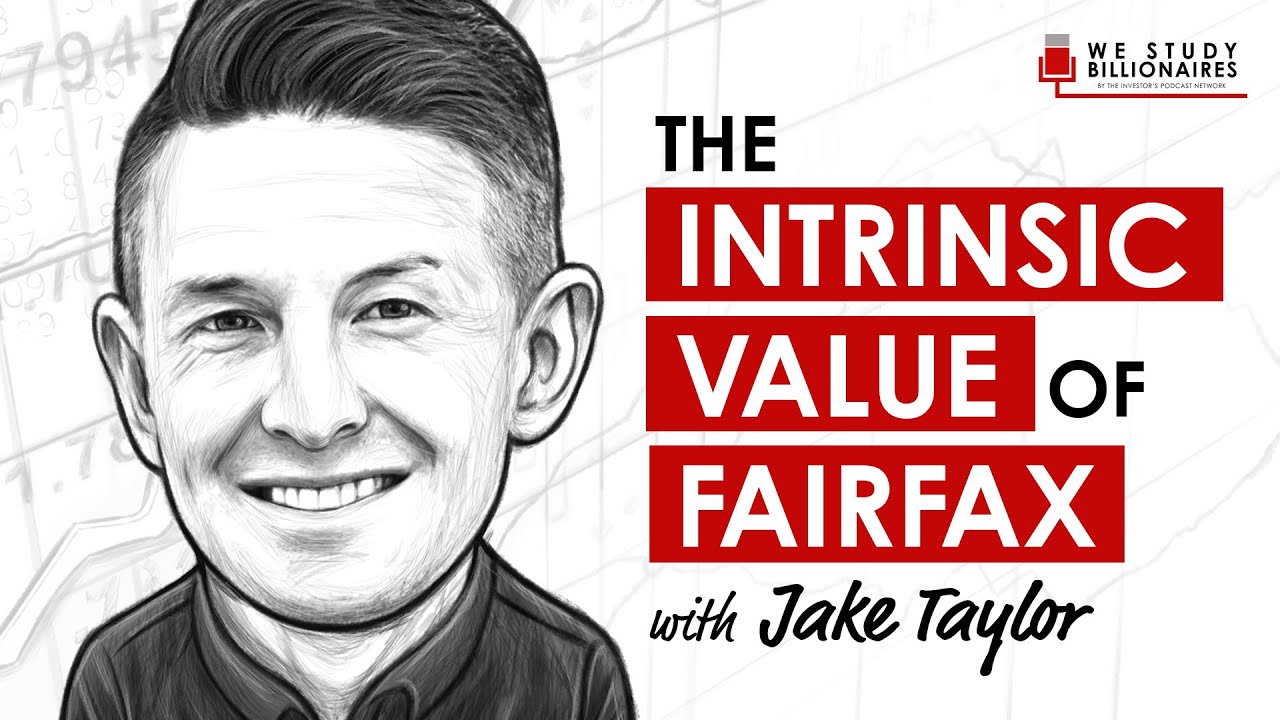 Company announces their results, book value is at $15.63. At current prices of $7.6, they are trading at a 50%+ discount. Major update is the demerger of Fairchem specialty. Cash is at $185mn and company continues their buyback reducing sharecount to 150.4mn from the last year number of 152.6mn.

Thank you for putting Fairfax India into prominence here.

Maybe pertinent to point out that the relevance of book value or lack of it.

The book, which comprises publicly listed (less than a third) and private equity investments (about two thirds) is measured at fair value. Measuring private investments at fair value under IFRS that Fairfax India applies, involves substantial managerial judgement graded at various Levels up to Level 3, which has the highest levels of estimates. Fairfax applies Level 3 techniques to determine the fair value of its private investments. This ultimately flows into Equity and forms a substantial part of Book Value.

Consequently much of the Book Value is a managerial estimate.

I was a little stunned when this dawned on me. Let me repeat, Book Value of Fairfax India is a more or less a managerial estimate. For folks who have been associating Book Value with historical costs and tip toeing into Fair Value will know that they trade one accounting principle, of reliability, with another, i.e relevance. And that trade-off can be high if managerial estimates that goes into producing Fair Value is based on highly favourable assumptions that is not borne out by results, as the future ‘presents’ itself.

In case of Fairfax India such favourable assumptions are in-fact, the norm. I wrote about it in a well received article in Seeking Alpha. I should mention that my article was accepted only after I sought confirmation from Fairfax India about the accuracy of interpretation of some of their disclosures. I also wrote to the auditor PwC (no response) and found that Audit Report of Canadian Standards provided less assurance than say Singapore Audit, which sought more from auditors wrt assurance.

Fairness Of Fair Value: An Analysis Of Fairfax India Holdings

Let me know if you are unable to access it.

Sine the time I wrote this about 18 months ago, the managerial judgements used to arrive at Fair Value continue to be borne out to be highly favourable.

I understand Fairfax has invested also in 2 general insurance companies in India namely ICICI Lombard (listed) and GoDigit Insurance. Am I missing something ?

Here is the historical book value and corresponding P/B

Fairfax raises $500mn which will be due in 2028 at 5% fixed coupon rate. This is mostly a refinancing operation to lower cost of debt.

TORONTO, Feb. 24, 2021 (GLOBE NEWSWIRE) - NOT FOR DISTRIBUTION TO U.S. NEWS WIRE SERVICES OR DISSEMINATION IN THE UNITED STATES Fairfax India Holdings Corporation (“Fairfax India” or the “Company”) (TSX: FIH.U) announces that it has priced a private...

They invest in both listed and unlisted entities. Their largest investment is in Bangalore International airport, of which they hold 54% stake with the rest of stake with Siemens, Government of India and Government of Karnataka. Their original investment was $653mn in 2017 which has been recently valued at $1.35 bn (30.06.2020). They plan to list it by the end of 2021 at a target valuation of $3bn (implying their stake at $1.6bn).

Airport authority of India is planning to sell its stake in Bangalore airport. This will give a fresh valuation for Fairfax’s stake in it. Management has previously mentioned that they plan to list the airport holding company for a valuation > $3bn.

AAI to offload residual stake in Bangalore and Hyderabad airports

Fairfax sells their proportion of shareholding in Privi Speciality at $163mn. Fairfax had originally bought stake in Privi in 2016 at $55mn. Fairfax’s stake was valued at $138.4 mn as of 2020 end.

Fairfax will also invest $7mn in debentures issued to entities affiliated with Mahesh Babani (founder of Privi and the one who is buying shares from Fairfax). Overall it was a profitable investment for Fairfax.

NOT FOR DISTRIBUTION TO U.S. NEWS WIRE SERVICES OR DISSEMINATION IN THE UNITED STATES TORONTO, April 22, 2021 (GLOBE NEWSWIRE) - Fairfax India Holdings Corporation (“ Fairfax India ”) (TSX: FIH.U) announces that it has entered into an agreement to...

Few updates from the company