Thanks for the comprehensive post on
Comparison between Astec vs BR. Very useful information indeed.

However, it would be great if we find out the Risk factors involved in both the business.

e.g. the other day when the news of Indo-china stand-off was flashed all the Agro-chemical stocks/ API stocks crashed by 5-8% when sensex fell only by 1.7%. Fortunately , the stocks later recovered when the news cooled off later, though we are not yet out of the woods.

Here the risk factors for all the agro- chem stocks are the import content of key starting raw material from China which is normally not disclosed/ quantified by promoters of the company in the AR or Investor meets.

I am also working to find out details for both the companies as follows:

(4) And now that the Govt has declared PLI scheme also for Agro chemical (in line with pharma API) , whether the company is eligible and it is taking advantage of the incentive scheme.

If you find my post improper, please do delete it.

Discl: I have tracking position in both the stocks.
It is not a buy or sell recommendation.please do your own assessment before buying any stock.

Thanks for taking this up. I agree completely that qualifying and quantifying these risks is a very important exercise. Apart from the stray references to China in Concalls, the best insight I have seen is in this video: 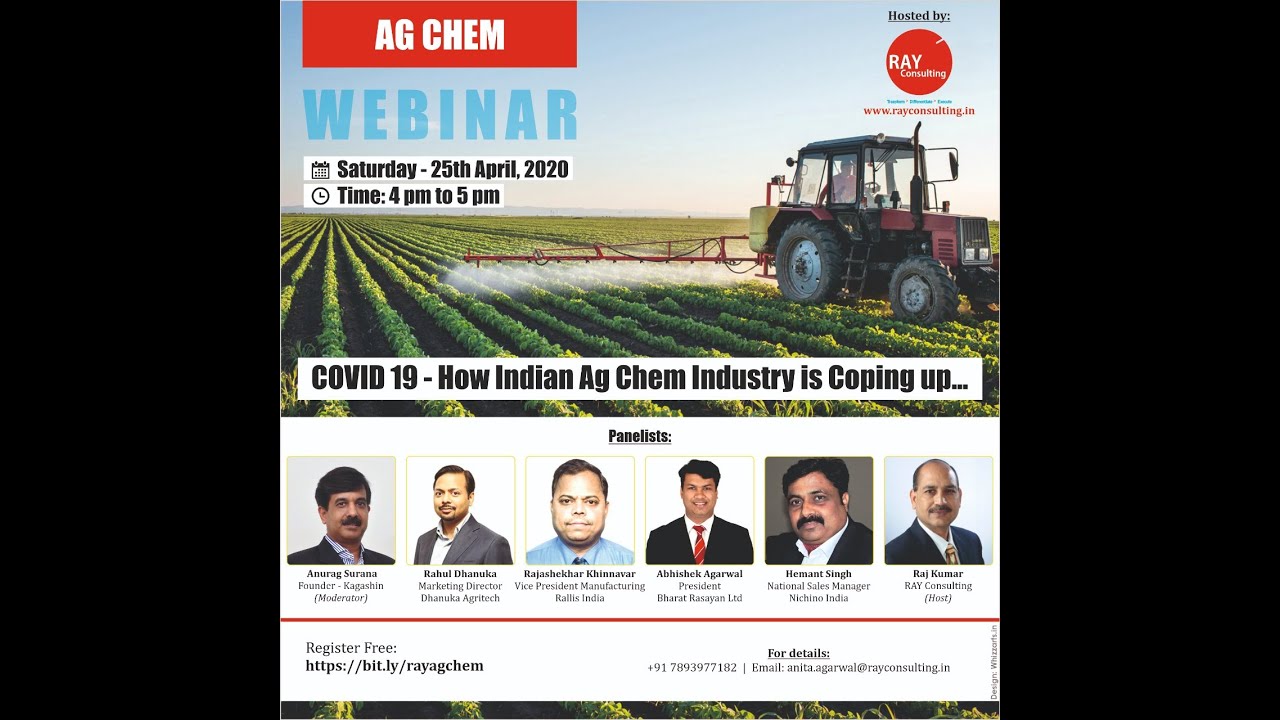 The president of Bharat Rasayan Abhishek agarwal talks (Starting at 33 minutes) about the practical aspects of sourcing from China and how it is near impossible to substitute raw materials from China.

I think this requires some serious legislation from government, but imo that is difficult due to India being signatory to various WTO agreements. For example, Mr Agrawal points out that in his opinion, the company needs to be in all 4 segments: Brands (B2C), Corporate Sales (B2B), exports and CMO (for a similar chemistry), for it to think about backward integration. Frankly I do not understand based on first principles why he feels that way. As far as I understand it, it has something to do with how the four verticals can compliment each other and perhaps the Scale argument (the company can only match Chinese companies on price if it operates at the same scale). He says that they have seen this in a one of the molecules called Triazinone (useful in making herbicides) wherein China was making it at 18$ so some indian companies decided to manufacture it. When Chinese came to know that Indian companies are trying to manufacture it, they reduced the price to 12$ (and can reduce it to 10$ too).

The reason that I am adding all this color is that the KSM substitution and backward integration are complex matters. Even if companies show the intent, it does not necessarily need to translate into real benefits. As per Mr Agrawal, what is required is for us to create plants which operate at the scale that the Chinese do (one of the speakers also mentions that chinese factories have some automation in the form of robots which of course reduces costs further), otherwise it is difficult to compete on price.

Having said all of that, I definitely do find this a very useful exercise. Just that i’m ambivalent on backward integrations. The same project which seems to reduce cost can quickly seem to increase costs if the Chinese companies reduce their prices below the company’s cost of production (due to their scale advantage).

My only concern is what would happen if there is disruption in supplies from china due to Geo- political reasons …
the way in which we are restricting Chinese imports of late and Anti-dumping duty already levied on many chinese goods…for example recently on Ciprofloxacin and Ofloxacin…just because we have capacities …tomorrow China may also raise price exorbitantly high for many agro- chemicals where we don’t have capacities and we badly depend upon china !

I think both astec and rasayan are working on backward integration. It is definitely useful to know , document and if possible quantify this information so that it can enable us to forecast what part of the revenue is at risk of being disrupted by geopolitical tensions. As far as I understand it, the focus is on building vertically integrated pipelines right now and not on dual sourcing although I agree that would be reasonable too.

The risk you outlined is also substantiated in this CARE report on Agrochemicals:

Quoting from the report “Agrochemicals production has been impacted majorly due to shortage of imported raw materials. The industry is facing headwinds due to the outbreak of the COVID-19 pandemic. Manufacturers in India are mainly dependant on China for the imports of raw materials needed to manufacture pesticides and with restrictions imposed on imports across ports in the country, companies are staring at a supply-side shortage”.

Bit different take from Astec management during May 12 2020 concall of Godrej Agrovet, although its about end products and not key starting material. But still it is interesting to note that Mr. Mukherjee is claiming that since India has lower cost of production (even though China is producing 5X of India), Indian companies with same price band will be bit more profitable…

From the conversation , I can make out at least the Neuland management is transparent…

It is always prudent for any manufacturer to always have an alternative source of supply of raw material at any point of time…if blind backward integration by manufacturing the raw matetial does not make economic sense !

Selling by Mr Ashok Hiremath seems non stop. His wife’s very minor holding also has been sold. Unable to decipher this. Could it be due to recent gains in stock price or what?

Mr Godrej in AGM shared that their holding is almost to the maximum ie 62.36% (9.95% being held by current MD Mr Ashok, total promoter holding already at 72.30% before Mr Ashok started selling) and not much head room left to increase it further.

Could somebody post their able thoughts on what to make out of this.

I have written to Company Secretary earlier this month and sent reminder again but no response from her. One of the possibility that Godrej’s during acquisition, may have put in condition that Mr Hiremath would remain in his position for 5 years post acquisition (to let Godrej understand the business) and then let Godrej run the show. As you will note, it is exactly 5 years back that Godrej have acquired Astec as can be seen from old news item below-

The acquisition to help Godrej Agrovet to foray into fungicides business.

Promoters being protective of their company, can become hindrance to the growth and can become roadblock for any big bang changes. So many acquirers outright buy out the promoters but Godrej’s may have preferred continuity and would have used this 5 year period to absorb technical/scientific knowledge of the business.

As I mentioned earlier, it is just one of the possibility and I am awaiting formal response from the company.

Thx for the insight. What u think seems to have substance. Please update us in case u get a response.

They had already clarified in the last con-call that there is no plan of merging from management. If all investor want they can send a request and we will consider in the next board meeting. Management is not going to initiate any merger process.

Astec Lifesciences Ltd., incorporated in the year 1994, is a Small Cap company (having a market cap of Rs 2465.77 Crore) operating in Pesticides/Agro Chemicals sector.

Report around 10 days back. Could not access complete report.

Report around 10 days back. Could not access complete report.

As per BSE Website - Astec Life Science is under long term ASM list - What this actually mean reference to the stock price ?

I have received following reply from CS after sending 3 reminders and marking copy to the CFO. It reads as below

Quote
We would like to highlight that, as per the Shareholders’ agreement entered at time of acquisition of Astec LifeSciences Limited by Godrej Agrovet Limited in FY2015-16, Mr. Hiremath was permitted to sell his shares in Astec after 2017.

The current share sale by Mr. Ashok Hiremath in Astec is for his personal liquidity requirements as per our understanding and is purely his own investment decision. Given the moderate liquidity in Astec, he is selling shares as per his individual judgement of market demand and supply dynamics.

Please note that there is no change in the future plans and business strategy of the Company and we, as a good corporate citizen, do make the necessary disclosures to the Stock Exchanges in a timely manner, as per the provisions of law, in respect of any material events in connection with the Company and its business.
Unquote

Under the proposed transaction, the trust will acquire 9.94 per cent shares in Astec Life Sciences from Hiremath.

Following this, the trust will hold 9.94 per cent shares in the company and will be part of the promoter and promoter group.

Its interesting news indeed. Few points to ponder over.

Hi,
I just found out thru the shareholding pattern disclosure on BSE that gthe promoter Hiremath has sold off his holding of almost 1.2% to savvy investor Ashish Kacholia. Not sure if everyone would like to take this as a positive endorsement for Astec or not.

It is indeed a good omen with smart investor like Ashish Kacholia buying the stake. We were aware of Mr. Hiremath’s selling but not aware about the buyer.