The co belongs to Apollo Group with Ms. Suneeta Reddy on the board as the director

Other vertical is Food & Beverages which includes catering to hospitals,Café (Sketch). This vertical can grow without much capex with Apollo setting small cafes at their own hospital and F&B business growing into non-Apollo business

3rd vertical which is the cash cow is the Bio-medical JV with Faber (Malaysian co backed by the government): 51% with Faber and 49% with Apollo Sindhoori Hotel. This is a cash cow business for the company and has been growing vvv strong

Segmental Results
As per accounting norms, Faber JV sales are not shown in the topline but profits are added in the bottom line as share of profits of jointly controlled entity. So standalone results will not have Faber JV.

GOING AHEAD
The share of Apollo Group business is around 75%, and non-Apollo is 25%
The challenge going ahead is to increase share of Non-Apollo business
We believe that in FY19 – Non-Apollo should be 35%

Detailed financials can be accessed on Screener.in or the co’s web-site

The share of Apollo Group business is around 75%, and non-Apollo is 25%

Yes as i mentioned that in management services + F&B business - the share of Apollo Group business is around 75%, and non-Apollo is 25%. The challenge going ahead is to increase share of Non-Apollo business. This is the part of business to track - the remaining Faber JV is doing excellent

Still, majority of business with related party is a bit of a concern. In such cases, we totally rely on the auditors to do their digging. Though the business in general looks promising, we need to start looking at potential loopholes that might lie right under our nose.

Few of my findings from the auditor report.

Stock getting strength in crucial times… good times ahead… 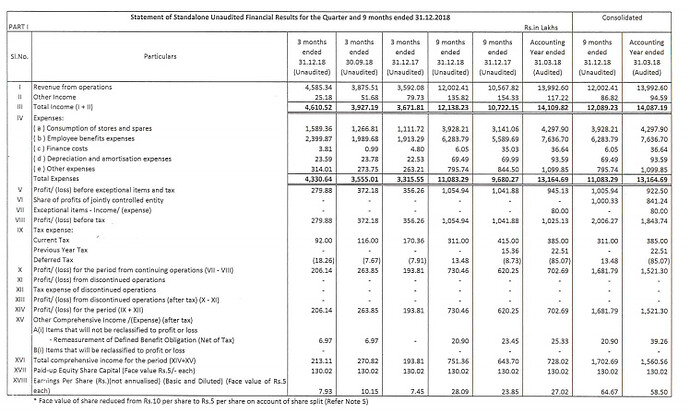 Faber should contribute more in future… 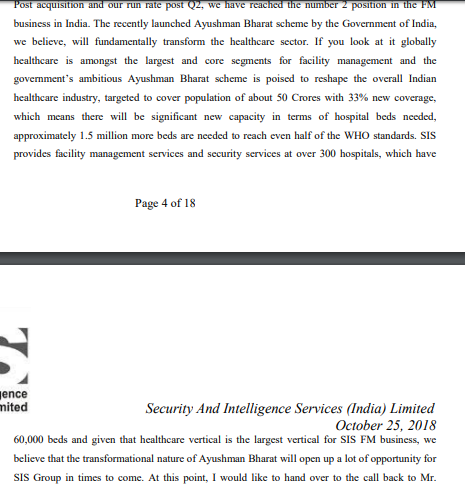 Disc: Have investments in both Apollo Sindoori and SIS

Till 2016 joint venture was consolidated for accounting purpose…from 2016 just the share of profits of the jv has been consolidated. 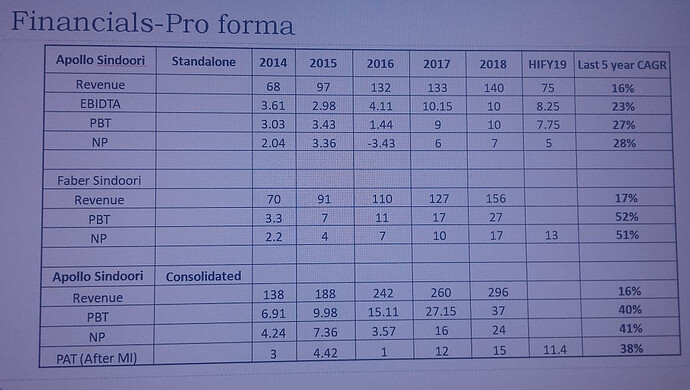 almost 20% Sales growth and 31% PAT Growth YoY.
EPS of ₹79 TTM. Trades at 12.5PE with more than ROE-30%… all round growth with focus on Food & Beverage (high Margin Business) than Manpower… Better things to come (through Ayushman Bharat) and Govt focus on privatization of health care services. 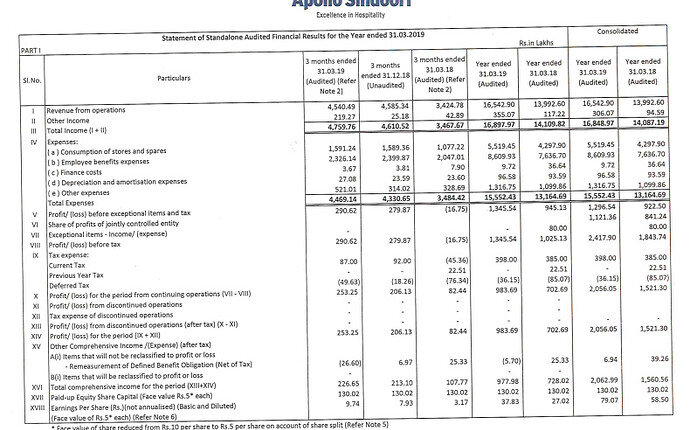 • Faber Sindoori did a turnover of Rs 175 Cr and PAT of Rs 23 Cr. For consolidating in Apollo Sindoori, this means that profit from Faber Sindoori JV increased from Rs 8.4 Cr to Rs 11.21 Cr which is almost 36% YoY growth

• The major development during the year was as under:-

o Consolidating the sales and distribution operations in the existing geographies.
o Implementation of innovation in the marketing efforts of the company. This was instrumental in delivering the sales growth during the year.
o Huge improvement initiative with respect to IT Dept.
o Since Indian healthcare companies are entering into merger and acquisitions with domestic and foreign companies, we will drive growth and gain new markets

Future Visibility from Management
• Goal for the FY 2019-20 is to show sustainability and increase in business & market performance.

• Though we had difficult environment of increasing statutory wages which plays a pivotal role in Hospitality industry, we are Targeting Rs 200 crores in Revenue and profit of Rs.20 Crores.

• The major work plan for the current year is as under:-

o To further invest in the organizational capacity and capability of the business in Non-Apollo Business
o Exploring new opportunity.
o To expand the footprint in all the geographies

Other Key Highlights
• Salary increase of CEO and CFO was 15% and 29% respectively
• Overall median increase in employee remuneration was 10%
• Total count of permanent and contractual staff is 4240
• Management and board salary is Rs 2.06 Cr against PBT of Rs 23 Cr

Risks:
• An efficient food supply chain is critical for organized food retail as food products need to be made available fresh and at good quality. Currently, this is turning out to be expensive due to lack of adequate cold storage/chillers and cost of power

• However, the inflation prevailing within the country and continuous increase in raw materials costs have a significant role to play in the actual performance.

Open Questions for AGM and others/Concerns :
• About 20% of the food and beverage sale is by way of cash sale at the food counters at various locations. Why so? 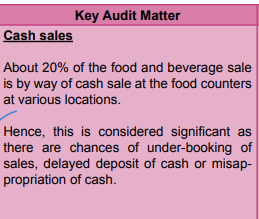 • Why tax rate for the year was only 16%? The other income from Faber Sindoori is also at a PBT level. So, why low tax on total PBT?

• Why receivables have gone up significantly 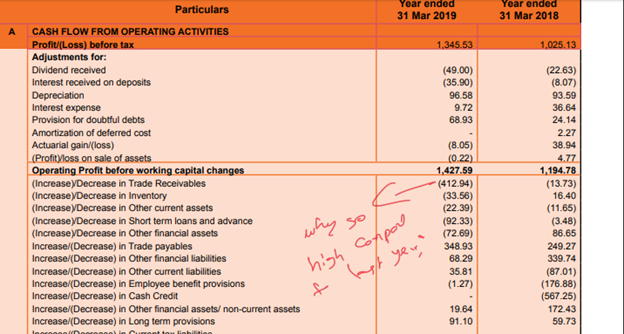 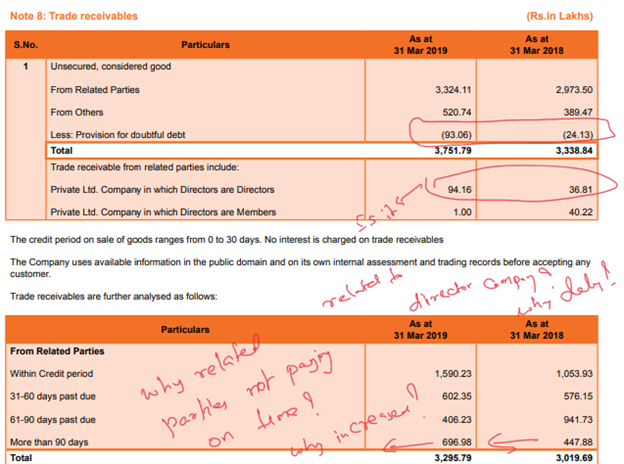 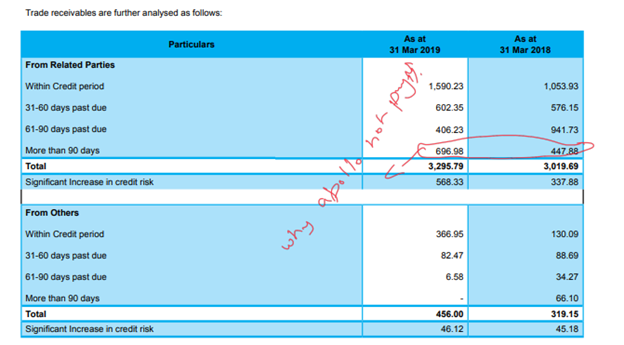 • Also, why there is such a jump in bad debt provision and is it coming from Apollo group highlighting the above point?

• There is 50-70% growth in various assets like computers, furniture and fixtures and kitchen equipment. Is business expecting strong growth in coming years and hence this asset increase or are there other reasons? What are the reasons?

What are these security deposits?

• What is this new item discount allowed in other expenses and what is the purpose?

• What is this performance guarantee?

Really good post. In this overheated market, this company is trading at a valuation I can live with. It will grow with Apollo hospitals & any other hospitals they serve will be a bonus. Though it is a microcap, risk is less as it is a related party of AHEL with the same management.

Disc: Planning to invest a little in this stock 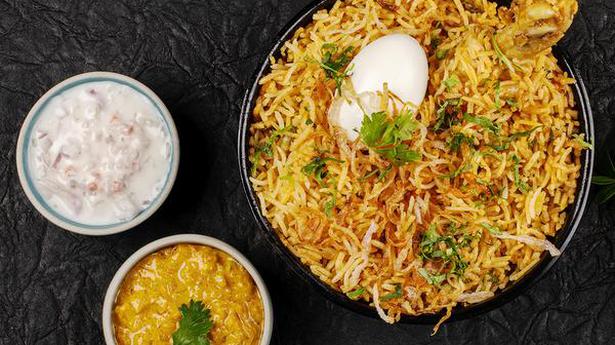 Olive and Twist’s Insta-worthy cafe and its cloud kitchens

From chic cafés offering zoodles to home-style comfort meals, this three-month-old Chennai firm has its fingers in many pies


“Our first cloud kitchen opened in June 12 this year. By June 12 next year, we plan to have at least 24 to 27 branches functioning across Chennai,” says Farhaz Ahammed, operations head of Olive and Twist Hospitality, the latest food and beverage name in town.

Over the past three months, the team has already had a café — the experimental Canvas By Sketch — a co-working space called One Vibe, above the café in Alwarpet, and two cloud kitchens up and running in Nungambakkam. Two more cloud kitchens, one focussing on simple South Indian fare and another on desserts and bakery items, are in the pipeline.

“Our cloud kitchens are essentially different brands operating out of the same physical kitchen. The food is delivered within a five-kilometre radius,” says Farhaz. “Though each serves a different cuisine, the focus is comfort food.”

Mirchi Bazaar focusses on North Indian cuisines, from parathas to dum biryanis, while Curry on Fire is Asian. “Our third cloud kitchen, called South Market by Sketch, will also operate out of the same kitchen,” he adds.

Sketch is the name of an outdoor catering company that is one of many brands under Apollo Sindoori Hospitality.

But though it is owned by Sindoori Reddy, the woman behind Apollo Sindoori Hospitality and her business partner Sameer Sethi, the team behind Olive and Twist hastens to reiterate that they are not connected to the older group.

They prefer, instead, to be seen as the new and adventurous kid on the block, and Chef Arul Santosh has a large role to play in creating this image.

The man is responsible for training cooks and creating menus for all the initiatives under Olive and Twist Hospitality. He reiterates Farhaz’s statement about the cloud kitchens, saying, “The menus in these are limited, and include the staple favourites. The idea here is not to experiment, but focus instead on standardising across different cities. I can guarantee that it will all taste familiar and authentic, right down to using just the right amount of butter in the dal makhani .” Expect favourites like bhuna gosht and paneer butter masala from Mirchi Bazaar, as well as Thai curries, momos and manchurians from Curry on Fire.

It’s in Canvas by Sketch, adds the chef, that he channels his innovations. From customising preparations for allergies and diet choices to tweaking preparations and playing with coffee brews, this café is his experimental playground, so to speak. “We toss our wontons in chilli sauce, instead of just serving the sauce alongside,” he says by way of example.

The innovations also show in choice of ingredients, like zucchini zoodles and potato starch instead of refined flour. Then there are the pizzettes, with thin crispy crusts and Mediterranean-inspired toppings.

The creativity at Canvas doesn’t restrict itself to the kitchen, it can also be seen in the chic interiors, from pink flamingo murals to a number of Instagrammable corners.

Blatantly targetted at millenials and Gen Z, this cafe is the more clear reflection of the young energy that the group as a whole is trying to put out.

For now, though, the main focus of the team is in expansion of the cloud kitchens. “We can only take orders and deliver food through delivery apps,” says Farhaaz, “But once we have enough different kitchens to coordinate among, we will hire delivery personnel, and move to our very own app.”

But though it is owned by Sindoori Reddy, the woman behind Apollo Sindoori Hospitality and her business partner Sameer Sethi, the team behind Olive and Twist hastens to reiterate that they are not connected to the older group

So these cloud kitchen does not fall under Apollo sindoori? i could not get this point please clarify if you have an idea.

To add to Prashant, more on this subsidiary formation is here in terms of purpose of creation.

At the time of AR publishing, subsidiary had Rs 1.84 Cr of assets/liability. This was coming from loan given from parent to this subsidiary 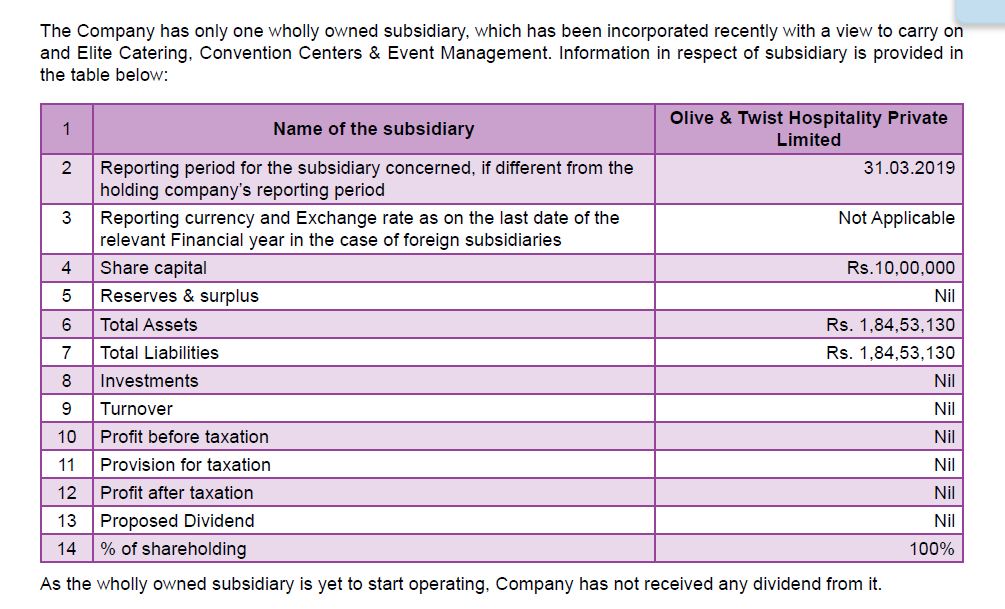 Disc: Hold a position. This is not a recommendation and please take your own investment decisions

So, things happening on ground at operations level at a good pace. Lets see when it starts getting reflected in results

very useful information. Actually i am attracted with their business of catering to hospitals + Faber. Now this new initiative is even very good ( cloud kitchen). Lets see how it pans out.