A tale of 3 companies - TCS vs Infy vs HCL Tech

I was just going through the ROCE’s of these three marquee indian software companies. I am not an IT guy so i dont know much about the specific competitive advantages of these 3 businesses. All i know is that they make software and provide services. The relative differences in the ROCE’s however tell a story that even someone as uninformed as i am could use to make some intelligent investments. Here is the chart. Clearly from ROCE trend TCS wins hands down. Since 2007 its return on capital has increased from 62% to 67% & has been increasing since 2012 whereas infy ROCE has decreased from 71% to 55% over the same period. HCL Tech is even poorer - from 45% to 30%. 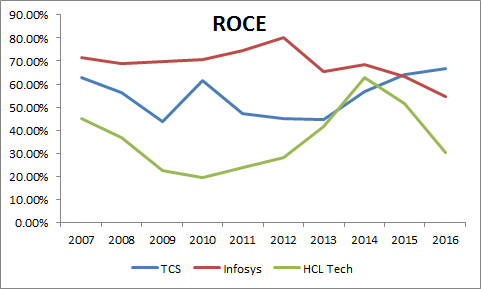 TCS comes out as a strong winner in my opinion its got incredibly stable margins, a ROCE which is increasing.

These are the numbers. There are many IT guys on this forum and i am just highly curious to know what is that TCS does that makes it relatively more valuable. Purely from an education point of view if anyone can throw light on this it would be awesome!

TCS used to have ultra low billing rates…not sure if that’s still the case. They have a huge army which makes it easy to re-deploy specialists to save any troubled project. Most IT services firms are more or less same, I felt. The only difference is in the number of employees.

As for management, TCS is moving its proven CEO to Tata Sons…that’s a negative. Vishal Sikka is a mature and competent guy with the right mix of tech and business skills. IMO, his understanding of technology is better than the rest of the CEOs.

The market is spooked by Trump’s jingoistic rhetoric and probable H1-B regulations. Some companies have already taken steps to hire freshers in the US. A few tech trends that can impact are automation, AI and possible in-shoring of jobs. The troubled IT sector is looking ripe for investment now and a detailed discussion to explore which one will thrive will be exciting.

IT industry has consistently faced some headwinds, but it has come on top of it every time so far in last 20 years.

In 2000, analysts were saying that IT company will loose due to no Y2K revenue going forward. Although IT company overall faced some troubles due to Y2K and dot-com bubble, the whole IT industry (I am generalising) came up really well.

Then in 2003-04, there was a scare that Chinese were going to take many IT job, which led many leading IT companies to set up shop in China. That scare did never materialise.

Then 2007-08, IT industry not only thrived but increased the market share.

There was a time when Indian IT companies could be looked upon to do Development and Support only. Slowly the addressable market for IT companies has increased tremendously to BPO, Consulting, Infrastructure management, product development, KPO to name few.

The current headwinds which IT industry is facing is not new. Historically, H1B visa scare crop up its head for every US election. It may affect some companies to an extent, but overall it has a potential for more offshore work, as US companies would prefer to do work offshore than to get people from Indian IT Company.

People are citing that AI, Automation, Clouds will affect the industry, which is a fair assessment. But companies will still need an army of developers to perform these task for them. By the time this task will complete (after 4/5 years), some new technology will come and Companies will chase new technology. It has happened so many time in last 20 year and I can see it likely to continue.

Coming back to Financials- The lowest ROCE is 30% for HCL Tech. That is a significantly higher ROCE for any company (across the different industries).

Although their growth has slowed down from around 15% to 8-10, I think they can go grow at this rate for quite a few years. And a lot of these companies is having a reasonable PE (around 15 for HCL Tech plus 2.5% dividend yield). In Indian Market, there are not many companies generating 30% ROCE and available at such a compelling valuation with a reasonable certainty of high single digit growth.

Overall, I do not think they will multiply from here, but they have a potential to give decent return from here.

Is it that TCS more india focused? whereas Infy is mixed and HCL Tech mainly serves foreign clients?

All it takes it an executive order from the new president and it will be like Humpty Dumptys fall. All the kings men (CEO)will not be able to patch up the business models of all the three. If he can make an executive order banning civilians from seven countries, nothing is beyond imagination in these times. Anything can happen

All the valuations and predictions will fly out of the window

The visa games have started
Will be interesting times ahead

Can anyone in the industry share their expertise please

Being in IT and worked for TCS , I can say that these companies are too flexible and can get around it in some or the other way . TCS has been cutting H1B’s dependencies since 2015 and more hiring locally . The bigger challenge is global cut in IT spending and changing business model for these companies .

Best is to watch out as there will not be much impact on bottom-line due to visa’s .

Invested in infosys , views may be biased .

For those who are interested here is a link that provides details about HIB’s issued company wise fo e,g TCS for 2016. You can input the company name and the year to look at the results. The site indexes the data from the United States Department of Labor

I think there are multiple dimensions to look at the problem. There is no denying the fact that pretty much all IT companies who are exporting to the US will be impacted, the quantum may very companywide.

If the IT company has to give a salary of $130k, they are unlikely to send many people from India to the work onsite. They would rather hire a consultant in the US for a specific assignment, and complete the job. I am not sure if it the bill impacts existing people on H1B. If it is, then it is the decent impact on US focused IT companies. If the bill aims at the new H1B visa, then it impacts may be somewhat limited.

Most of the leading companies have started hiring locally in the US for last few years.

In the medium, to long term, it could turn into India’s favour. (President )The Donald is saying American GDP to grow around 4+ from the current rate of around 2+. Due to high boom in app-based companies, salaries of IT in the US are higher level. If the economy grows at a rate which the US is aiming, then there will be high demand and there is not enough supply in the market. They could push salaries at a very high rate, and all these companies did not have a luxury of hiring people from India at a cheaper rate, which they had in last 20 years.

On a strategic level, IT is a great differentiator and companies cannot afford to delay the work, and this would be an even bigger trigger for sending more work offshore. The difference between Indian salary and US salary will become compelling to send more work offshore. Higher onsite cost may be offset by more offshore work, but it will be while before it happens.

I came across this interview of Ridham Desai on Bloomberg, who has echoed similar thoughts (45:00 minutes).

Looking at their balance sheets and P&L statements, which one is looking better for the horizon of more than 10 years?

Many things have changed from the start of this thread. Specially Cloud , AI was considered threat to these companies, but these companies are thriving on these technologies…Its interesting to know your current views on these 3 companies…I am Invested in all three and also in LTI too…

Actually I am in medical profession, so this is out of my circle of competence.
But one common sense thing is - All these companies are sitting on HUGE CASH. So they can simply buy out small upcoming, promising AI companies. And that’s all.
Believe me, they are more worried about such AI stuff than we as small retail shareholders.
Because their earings and lifestyle depends on how these companies perform in future.

I have same view on fintech and banking sector. The big private banks will simply buyout such fintech companies. That’s all.

What I meant was…if at all I want to reduce my exposure to IT, which is currently around 25 % with Infosys, TCS, HCL and LTI…which 2 companies I can get rid of …and still make most of the remaining 2 companies , without any opportunity loss inside the sector?

Service companies although are same, there could be some differentiating factors which separate them. Business verticals of the companies, domains they get more revenue from, geographies they are concentrated in etc could be different. And current valuations vs past valuations, market’s perception regarding such valuations, Indian IT correlation with US IT etc are also to be looked at.

I think, it all depends on one’s expectation with IT sector. The recent bull run may be over, with IT index down 30% from it’s ATH.

I have positions in HCL and IT index.

You have got a point! We might think they don’t care, but they do