WPIL share price is languishing due to head winds. However in budget there are big money allocation for water infra. Let us see how company capitalize on this opportunity. Even somehow there pumps are used in all types industries such as steel, fire pumps, irrigation, mining, municipal, water infra etc.
Now I believe company may have business tail winds from Budge 2021
Newspaper Article

Long Term Techinical Analysis of WPIL. ( Not a buy or sell reco). 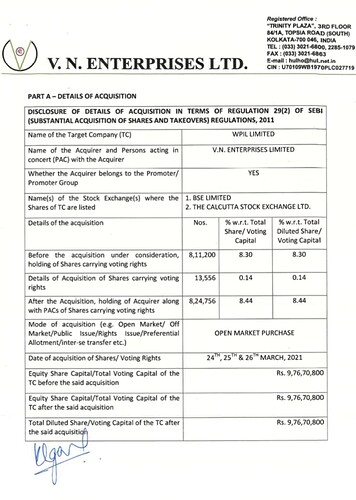 Yearly profit was down and receivables were up. Need to watch. Promoter buying is good aign.

Promoters keep buying this stock in market. Is there something we don’t know?

WPIL seems to be trading at extremely cheap valuations compared to peers as per Screener. (All data from screener).

To begin with, a snapshot of WPIL: 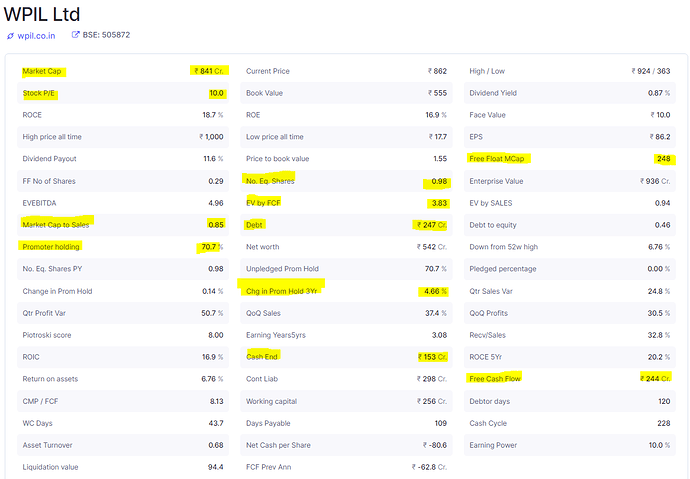 Taking the Median EV/FCF of these 4 players, which comes to 12.88, WPIL seems extremely cheap. 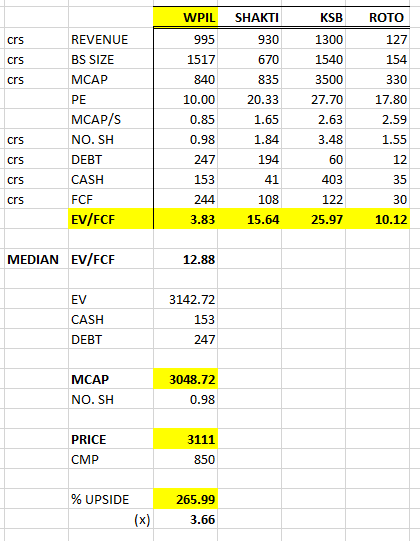 Shakti pumps and others maybe running on ‘Kusum’ stories, but if one studies the Technical expertise and areas of operation of WPIL, the assets it as in India and Europe and SEA, seems a re-rating is long over due. Add to that, the cheap valuations, low float, consistent promoter buying.

(disc: invested and praying for Re-rating)

While q4 results were quite encouraging but overall the return metrics have remained under lot of pressure and this is despite strong global order book. is this just to do with their inability to pass on the price increase (of underlying commodities) and thereby impacting limiting the profitability. any views on this will help.
additionally, any idea if they have started servicing the oil & gas sector after their acquisition in 2019? 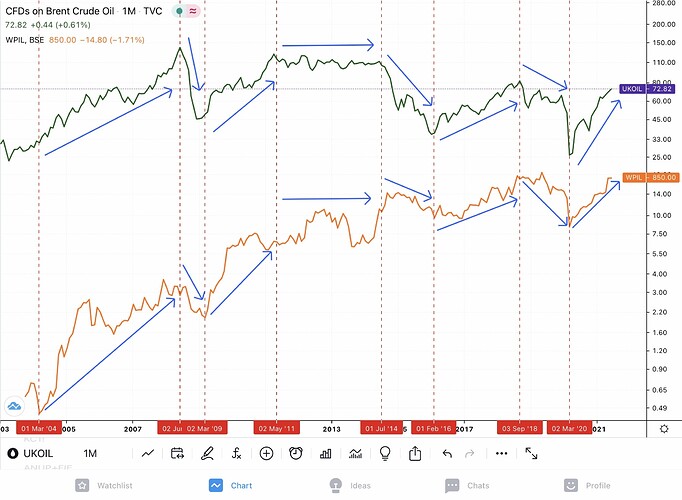 Outperformance may just be beginning for WPIL…

Bodes well for WPIL, this news…

India News: NEW DELHI: India will have nine new nuclear power reactors by 2024 and a new nuclear project, the first in northern India, will come up 150km away fro. 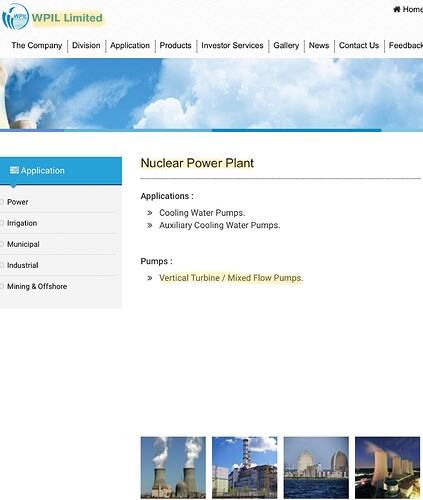 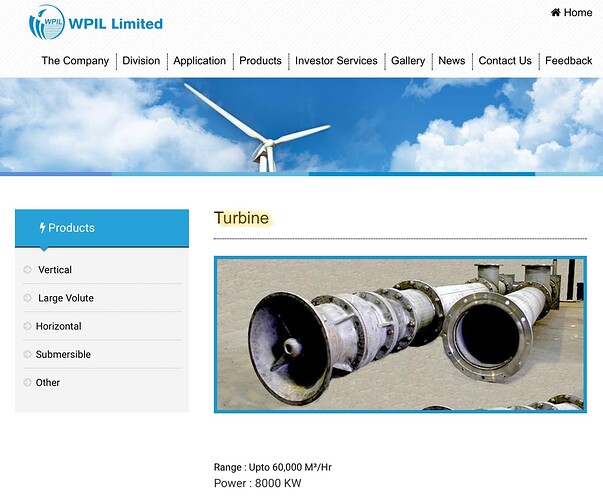 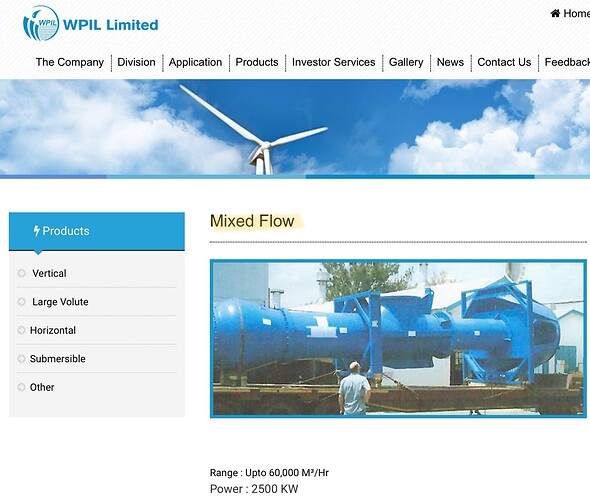 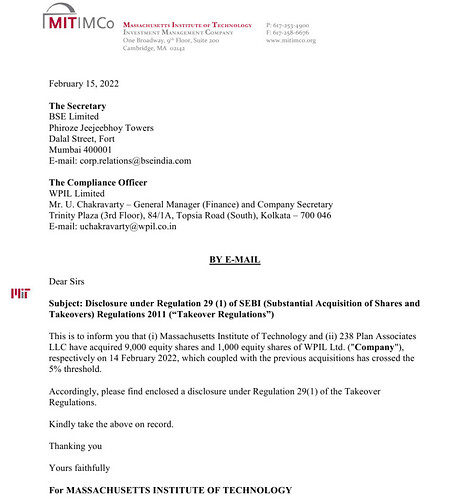 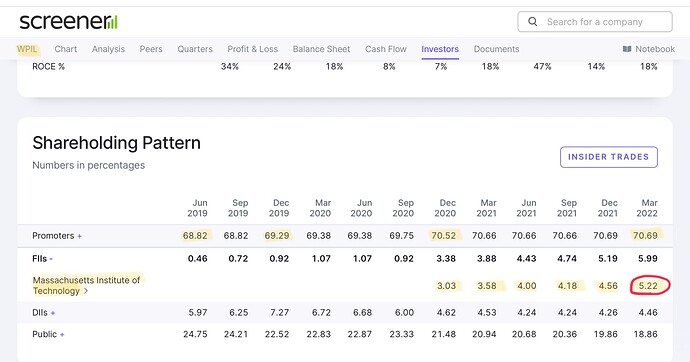 WPIL’s June qtr numbers were very decent & maybe a precursor to better things to come going forward. The June qtr has traditionally been a weak one for the Co., & the numbers should also be seen from that perspective. Sales came in at 299 crs, a growth of about 33% over Q1 last year. More importantly, the higher operating margins of 17% vis-a-vis 11% YOY, means that the Co. is in line to improve upon the 18% OP margins of 2021-22. The MD, at the AGM was pretty confident of maintaining margins of about 15% on the product (Pumps) business. The margins in the project division are expected to be much higher!

We are talking of a Co. which can be termed as an Indian multinational, with a number of profitable subsidiaries across the globe! These foreign subsidiaries are in no way any less profitable as is the case of a number of other Indian Co.'s having subsidiaries abroad that bring down the consolidated numbers. In fact, the Subsidiaries are helping improve operating margins! These subsidiaries are supplying pumps across industries/ sectors like Oil & Gas, Nuclear (recognized as Green Power & hence being given a major thrust in the developed world.), irrigation etc.

Valuations: For a multinational Co., enjoying high operating margins across the globe, with more than an acceptable RoCE in excess of 20%, expected to generate profits of about 110-120 crs, a current market cap of 1270 crs leaves enough room for growth in terms of market cap as well. I see growth both in earnings as well as the multiple which as we know is a deadly combination!!

The MD also mentioned that having reached a critical mass in terms of operations, it now made sense to get listed on the NSE, so a listing on NSE is very much on the cards. Attaching the June qte numbers. Also, the Annual Report, which makes for interesting reading!

Oil starting to move up again…::

WPIL touched a new 52 week high yesterday. The Q2 numbers are expected to be announced on Monday, which will determine how the story is unfolding. The float is low at 18.73%, if we reduce the institutional holdings of MIT & Kotak mutual fund.

@RajeevJ Sir… how do you read the results… margin has gone down but topline is up…? is this an aberration…? 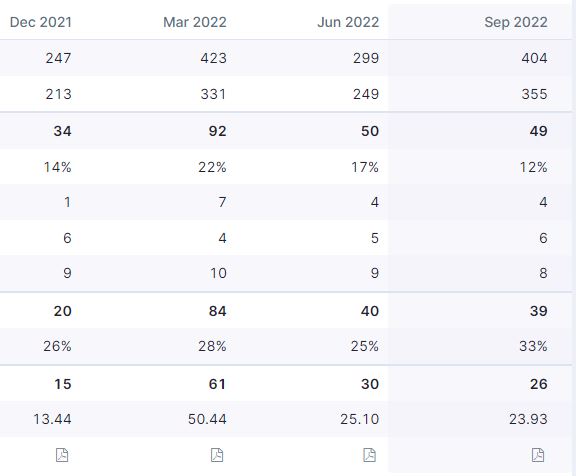 @Ysr
WPIL’s numbers were a mixed bag. The Operating margins took a major hit with raw material (Cost of goods sold) cost going up from about 40% in corresponding Q2 last year to 60% of Sales in current Q2. To put things in perspective, it was 45% in the preceding qtr (June Q1) & 43.6% for the whole year 2021-22. Perhaps, there may have been some one time cost incurred, though the Co. would have done well to explain this anomaly. To me this seems to be a one off.

Other than this, the numbers were very good, with Sales at 404 crs, growing at 40% over Q2 last year & 35% sequentially over Q1. Sales for the first half of the year at 703 crs has grown over 37% over the same period last year. For a Co. to reach the next level, it needs to grow its sales as there is only so much belt tightening that is possible with little or no growth in Sales. If the Co. can revert to earlier profitability margins, it could potentially lead to a huge increase in profits, but we need to first ensure that the fall in margins was more a one off. The other positive is the debt reduction from 317 crs to 271 crs. The debt equity is comfortable at .41 & the trailing ROCE is a healthy 20%.

The Projects division has done exceptionally well & now constitutes over 50% of Sales. This division is not impacted as much by raw materials prices & has grown well. The pain lies in the products (pumps) division.