EPC Division of Vindhya Telelinks Ltd since its inception in 2007 has become one of the leading players for Telecom Network Rollout, also providing solutions for Power Distribution and Sewerage projects. EPC Division has vast experience of working in hilly and inhospitable terrains and has successfully executed several projects in India and nearby countries. The EPC Division has a strong presence in the Northern Region of India and is well equipped to execute the Network for Spectrum Project as per the specifications and requirement of the Defence Services.

Major triggers that can shoot the price of Vidhya Telelinks are:- 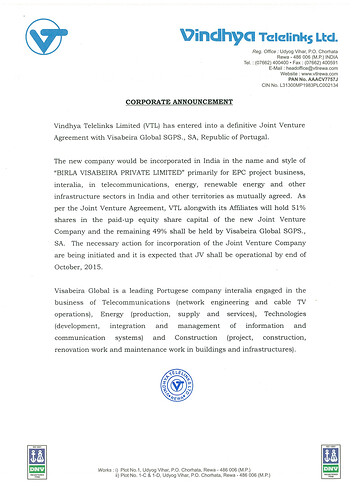 Thanks - why is the company just not generating any cash flows - OCF is consistently negative and debtors are going up like crazy. The company’s revenues are going and sitting as receivables on BS and not translating into cash at all.

Infact when i add up the debt it totals Rs. 300 Cr. - at say 12 % ROI, that’s almost 35 Cr. of interest repayment - plus repayment of principal plus fixed asset creation. So, does not look like this company can ever generate free cash - a thesis so far validated by its record over the years.

Unlesss cash flows improve drastically, it looks like a waiting debt bomb that can explode.

Its time to revive this thread. We are standing at the same place since July last year - CMP of 600Rs. I feel the only issue here is the Operating cash flows. Consistently showing negative operating cash flows over last couple of years. Investigated deeper into the issue - read AR of last 5-6 years. There seems no fraud/siphoning of money by the promoters. No sales reversal or bad debts provided. This is a genuine issue with the company since its clients are government entities. Its operating profit goes into increase in debtors (or increase in working capital). Looking at ROE, sales growth and profit growth, company’s performance looks phenomenal. But, its entire profits goes into investing in debtors. Over years it has been managing its investing cash out flows either by taking loans from bankers or having inter corporate loans. Such companies will hardly able to generate positive operating cash flows. Look at L&T the classic example. Over years it has been not able to generate positive operating cash flows.

So, coming to the question - Should we invest in such companies? And if yes, then why should we? Please do consider L&T thesis while providing response.

I am double minded here. Do tell me if I am missing something here.

Latest News. Get all the latest India news, ipo, bse, business news, commodity only on Moneycontrol.

It is either a gold mine at this price or a super-dudd stock.

The order book is genuine. we know it’s a govt contract…and govt and delay go hand in hand…but what is important here is can company generate substantial cash flows to stop further keep investing in receivables/working capital…we are getting this business at cheapest valautions…but what to do with the cheap valuations if company’s business doesn’t seem sustainable…but then look at l&t…same cash flow pattern…am I missing here something…

They had received bigger order than this in 2010 - but quick math suggests it never showed up on P&L till date!! So order book sanity is questionable

There is good article in moneylife. I thought of sharing portion of that

The EPC division has a strong presence in the northern region of India and, currently, concentrates on three primary business verticals: telecom, power and sewerage projects.

The division had a robust order book position of over Rs1,500 crore on 31 March 2015. In the telecom vertical, it won a package of the defence Network for Spectrum (NFS) project as a lead bidder in July 2014 and has been awarded the contract to roll-out a state-of-the-art intrusion-proof network for defence services in the states of Himachal Pradesh, Punjab, Haryana and Delhi & NCR (national capital region).

Its power vertical had bagged a big project worth Rs475 crore in 2014-15 for strengthening of distribution network under the special plan in the state of Bihar.

Vindhya has entered into a joint venture agreement with Visabeira Global SGPS, SA (Republic of Portugal) to handle EPC project business in telecom, energy, renewable energy and other infrastructure sectors in India and other territories.

Vindhya has a fantastic return on equity (RoE) of around 32%, based on its trailing 12 months’ earnings on a stand-alone basis. Set against that, the valuation looks attractive at around 8 times its trailing 12 months’ earnings. The company has been financing its capital needs in the past few years by resorting to debt funding, leading to a rise in debt levels. The debt-equity ratio was at 1.03 on 31 March 2015. But, thankfully, there has been no equity dilution.

Promoter holding stood at 43.52% on 31 December 2015. The stock has delivered tremendous returns in the past few years and its share price zoomed by 350% to Rs629 on 22 February 2016 from Rs140 on 16 May 2014. Will the stock do well in future as well? The EPC business is competitive and returns from EPC tend to be lumpy which means cash-flows get affected. But it would be worthwhile keeping a watch on the stock because of its low valuation.

Share price is continuously deteriorating making it more valuable. ROCE is 30%+, debt to equity is around 0.85 which is manageable. Is this the right time to buy?

Promoter shd dispose of Birla copr share and consolidate all 3 cable cos Universal, Birla and Vindhya in 1 .

Check the cash flows. They have been consistently negative. Such businesses are tough to generate positive cash flows in long term. Check Sterlite and other peers. How are they able to generate positive OCF? Also, there is a lot of cross holding among group companies which makes the structure complicated. Why do we want to apply our mind here, when we have much better companies in the pool. Management is not minority shareholders friendly.

Noticed that the discussion had halted due to the lack of a track record of generating cash flow.

Now that it is fairly clear that the co. has transformed itself into an EPC player (as evident by the changing segment sales in the screenshot below), how would you value the company viz a viz other EPC players.

Any updates on trigger from Universal cable. Is it a good buy. Universal cables also looks a good best rite now at current price. Suggest if anyone has any views or info.

what trigger are you talking about from universal cable?

Both Vindhya and universal cable were up today close to 10%. What is going on with the companies?? any restructuring??

guys any updates on this company…

I am looking for information related to developments going on in vindhya Telelinks. Guys pls share some information to research more about the company