ABOUT COMPANY
Varun Beverages Limited (VBL or Company) is a key player in beverage industry and one of the largest franchisees of PepsiCo in the world (outside USA). The Company produces and distributes a wide range of carbonated soft drinks (CSDs), as well as a large selection of non-carbonated beverages (NCBs), including packaged drinking water sold under trademarks owned by PepsiCo. PepsiCo CSD brands produced and sold by VBL include Pepsi, Diet Pepsi, Seven-Up, Mirinda Orange, Mirinda Lemon, Mountain Dew, Mountain Dew Ice, Seven-Up Nimbooz Masala Soda, Evervess, Sting, Gatorade and Slice Fizzy Drinks. PepsiCo NCB brands produced and sold by the Company include Tropicana Slice, Tropicana Juices (100%, Delight, Essentials), Nimbooz, as well as packaged drinking water under the brand Aquafina. VBL has been associated with PepsiCo since the 1990s . As on date, VBL has been granted franchises for various PepsiCo products across 27 States and 7 Union Territories in India. VBL has 31 manufacturing plants in India and 6 manufacturing plants in international geographies (two in Nepal and one each in Sri Lanka, Morocco, Zambia and Zimbabwe). 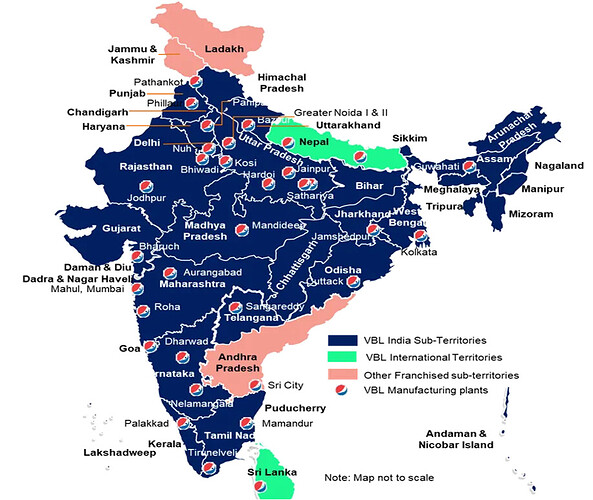 MANAGEMENT
I. BOARD OF DIRECTORS

THESIS.
• Operating leverage – CY22 sales growth will be high due to low base year and acquisitions of south & west territory.
• Deleverage – debt of 3000 cr which will be reduced by 40% in CY22.

Disclosure- Biased invested from lower levels. Not a Sebi registered adviser, views and thesis are mine please contact your financial adviser before taking any action. 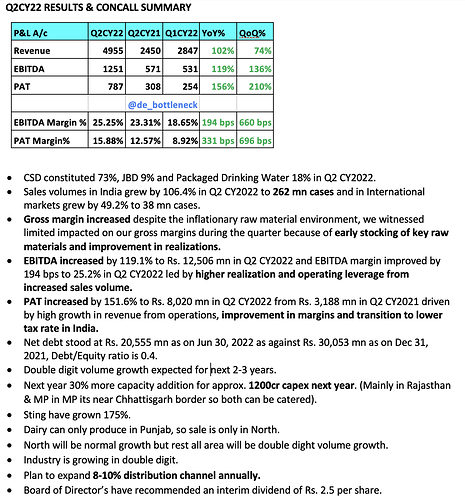 Hi - did you check if the company already had an existing thread to it?

There was one and it was closed.

This is my first topic that I have created on VP and would like to get opinions on Varun Beverages Pvt Ltd, the franchisee bottler for Pepsico in India with a market cap of 17,000 cr Some positives:- Low per capita consumption at 44 bottles in India in 2016-17 against 1,496 bottles in USA and 537 bottles in Brazil offer a huge growth opportunity. Further, grossly untapped rural areas and rising in-home consumption (~40 per cent of total market consumption) offers opportunity for category grow…

My study on Varun beverages

Welcome to the 52 new members who have joined us since last blog. Yeh Dil Maange more was a continuation of Pepsi's advertising campaign in the mid-to-late nineties, which it had initially launched as an ambush marketing effort against Coco-Cola...