Was surprised to see that one of most well-known company does not have a thread and thought to create a thread for the same. However, going through researching this script has been one of complex experiences though exciting.

So, let us start from the start. United Spirits Limited, abbreviated to USL, is an Indian alcoholic beverages company, and the world’s second-largest spirits company by volume. It is a subsidiary of Diageo PLC.

The company originated as a trading company called McDowell and Company (also known as McDowell & Co, McDowell or McDowell’s), founded in India in 1826 by Angus McDowell, a Scot.

There are many informative articles how the overall story unfolded and one can read: 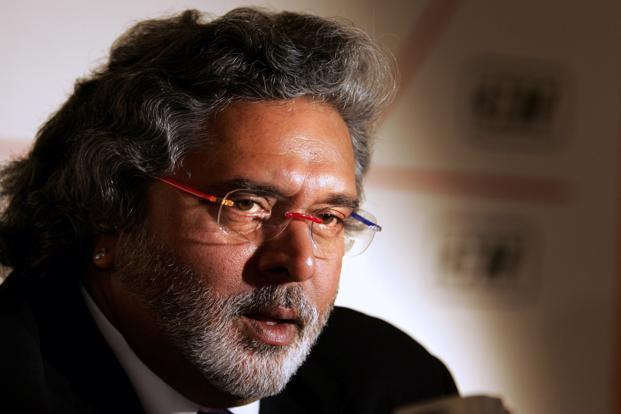 Mallya says he has decided to spend more time in England

Even though Mallya is out and Diageo PLC is done lot of clean up, still, there are some old wounds which continue to haunt USL and present in various annual reports and we will discuss further. However, below links can give a feel of kinds of tussle which went even post Diageo PLC taking over control.

As part of the agreement with Mallya last year, Diageo was to pay him the sum ($75mn at the time) over a five-year period in return for walking away from USL. 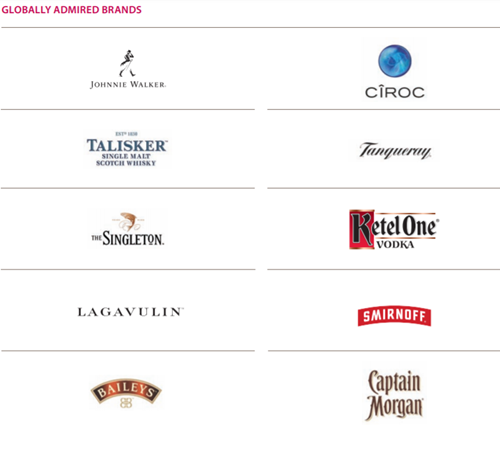 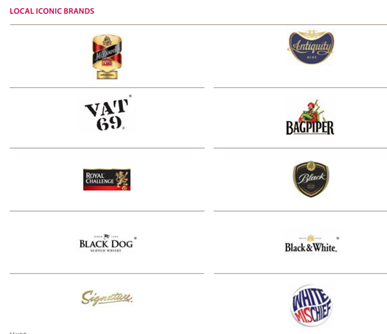 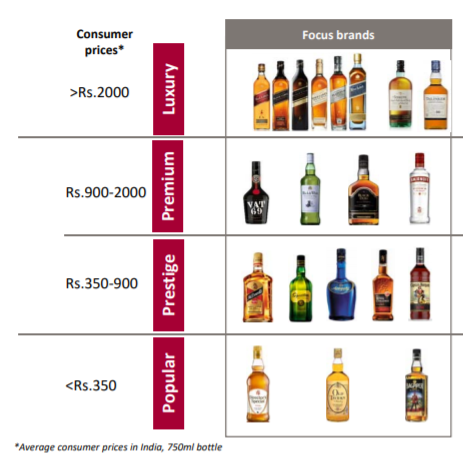 The Transition from 2013 till now:
Now, let us see, what Diageo PLC has done in last 5-6 years post take over though it is evident from above links that lot of time went in fixing corporate structure itself to create the basic foundation to start any kind of financial and operational clean up

As it is evident from above tables that new management has been able to do the herculean task of bringing house in order from one of the worst-case scenarios to a respectable state by fixing balance sheet, cash flows as well as profitability. This has been achieved by: 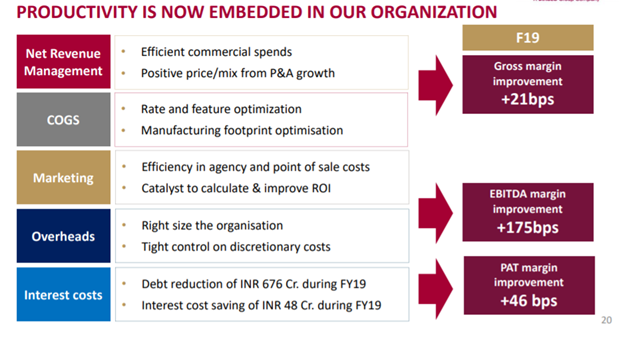 How has company performed recently: 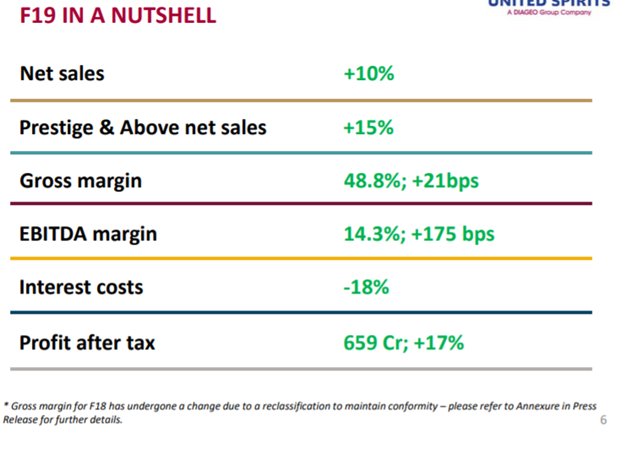 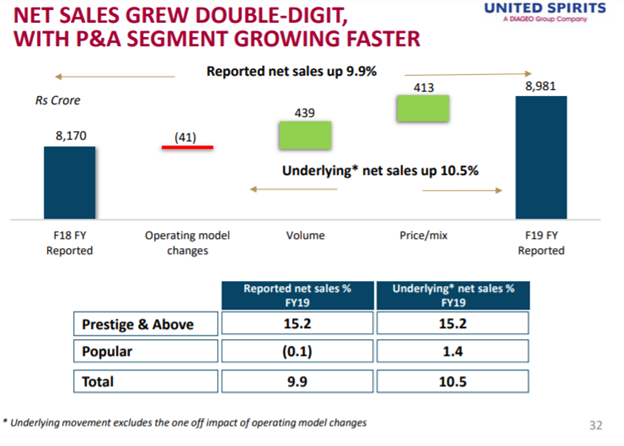 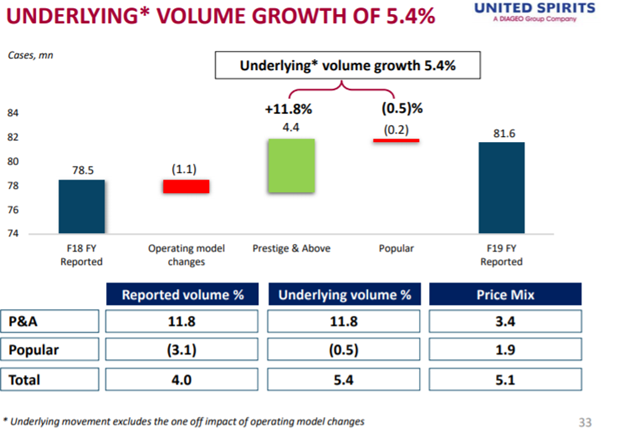 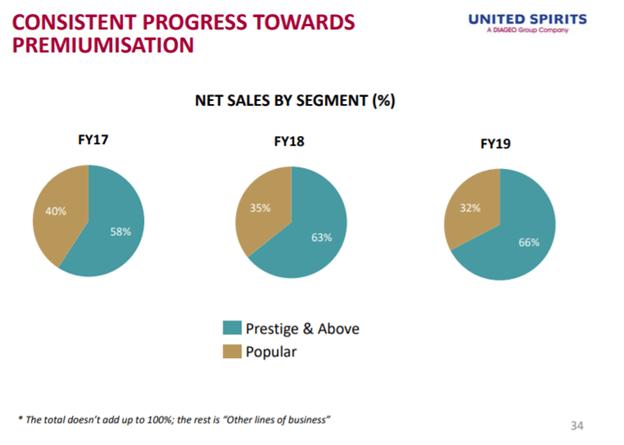 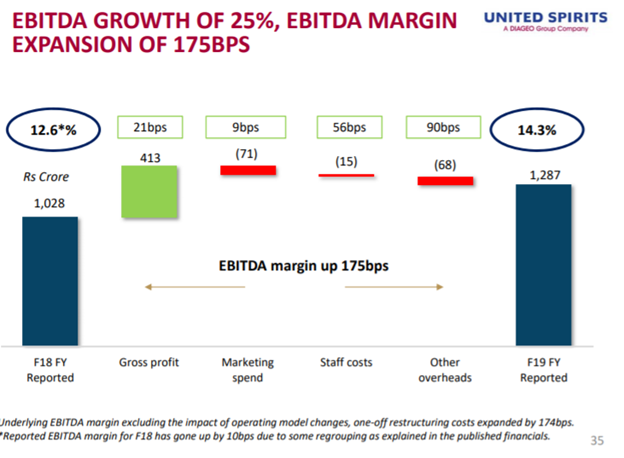 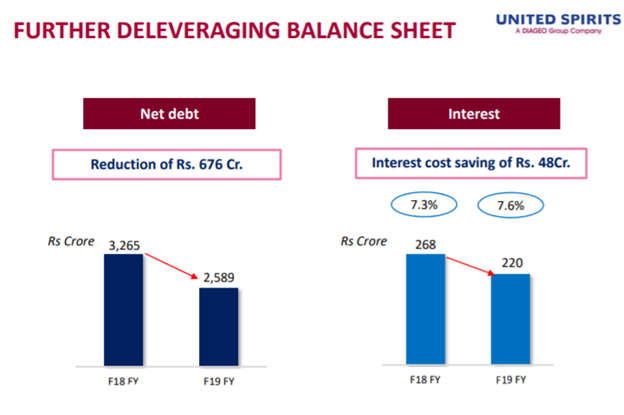 Disc: Hold a tracking position. Please do your own research. This is not a recommendation by any means

Note: There is much more to cover in terms of industry analysis, financial analysis and legacy and financial issues and will cover slowly in next set of posts. This is just a start.

The Parent Increased its holding in USL through a block deal. Shows some confidence.
USL.pdf (172.2 KB)

Company has been focusing on increasing the share of its Premium Portfolio & this is actually helping it to improve its margins.

I have some queries:

@suru27 can you please throw some light on these observations…

Was doing some competitive analysis n operational no understanding n this is where i m stuck. Can someone help first with definition of “cases”. This is what Quora says 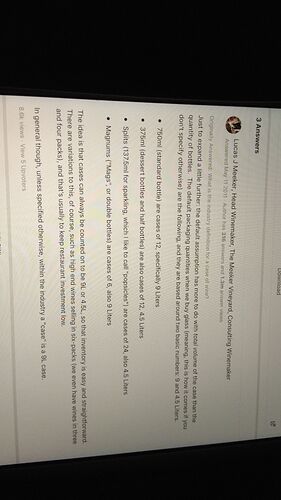 Now assuming 9L as one case, here is the analysis : On 2.5 crore cases , radico is expected to do 10k cr gross revenue in FY20. On a 9L per case estimate, this turns out to be Rs 4k per case and Rs 440 per litre. Comparing with USL, it is expected to do 30k cr gross revenue on 9 cr cases which turns out to be Rs 3500 per case which Rs 390 per litre. It’s difficult to digest that average price per litre of Radico is 10% higher than USL, specially considering radico premium share is 28% against 60% in USL. Any views ? Are radico nos trustworthy or i m missing something ?
Note : would put in Radico thread but as i was doing competitive analysis for USL , found it worth sharing

Some more data :
Here are approved prices by Rajasthan govt n if one compares top selling brands of Radico vs USL , it’s not off sync as most of Radico brands (8pm , morpheus, magic moment etc ) command good price n adding international brands like jaiselmer , it goes further up

Have you counted Franchise Sales Volume in the USL Data. Because theFranschise Sales dont roll up to Gross Revenue

Have been working on United Spirits recently. Some important data points from my side. Captured from Concalls/ARS etc

This is what Diageo Global Management has to say

Some more snippets from Diageo Global 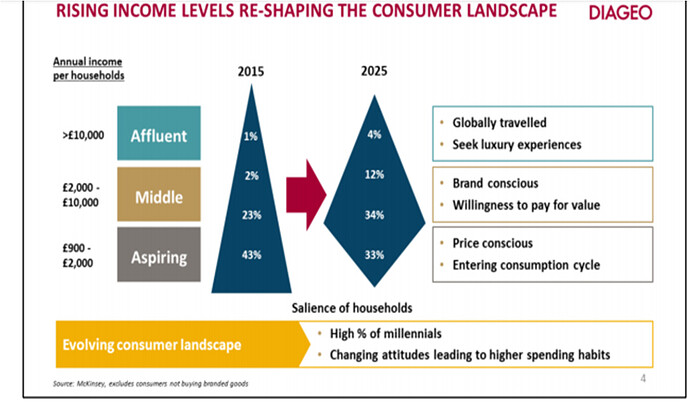 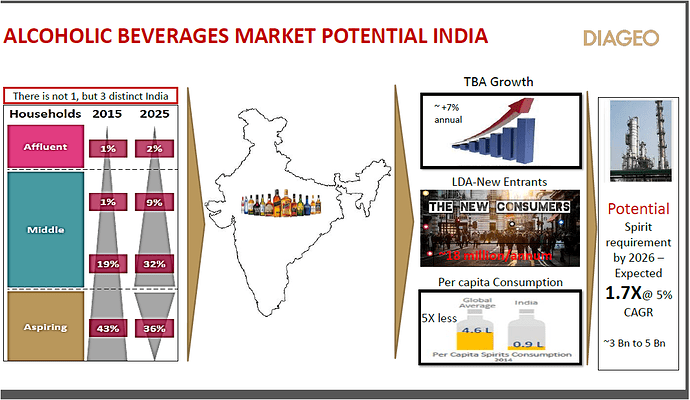 However despite all the promise, the Co has not really grown its sales a lot.
Mallya left in November 2012.
Sales have not grown since then
White and Mackay was sold – so that impacted
It has also outsourced (Franchised) some non core brands, so there is sales loss due to that too
There is a 10% drop due to Franchise Model movement
Competitors have grown, but even are growing modestly at 6%-7% only
Last year Pernord grew 15%, but USL even in Organic terms grew only 1 %

“USL’s operating margins improved to 15.1% during FY2019 and 18.9% during H1 FY2020 from 14.1% in FY2018. While the company benefited from the one-time sale of bulk scotch during H1 FY2020, the company’s operating margins adjusted for this one-time income (17.1% for H1 FY2020) have witnessed an expansion. Despite the general economic slowdown and rising raw material costs, internal cost controls and efficiency improvement measures have facilitated this margin expansion.”

“USL’s liquidity is strong with expected cash flow from operations of more than Rs.1,000-1,100 crore during FY2020, undrawn working capital limits of Rs. 2,920 crore and cash and liquid investment balances of Rs. 119.7 crore as on September 30, 2019. In relation to these sources of cash, USL has a capex commitment of Rs. 250-300 crore annually for FY2021 and FY2022 and an upcoming NCD repayment of Rs. 750 crore during Q3 FY2021. ICRA expects USL to be able to meet its near-term capex commitments through its internal accruals while the NCD repayment may be partly refinanced through fresh long-term debt. In addition to unutilized working capital facilities, the company enjoys healthy financial flexibility enabling it to raise debt at short notice.”

The company has been posting strong operational performance and what has been heartening is the consistent improvement in margins.

When Mallya left the company had 11% margins, today it stands at 17% and there still remains scope of improvement through Premiuimisation , Cost Control and Value Addition.

Current valuations of USL are approximately the same or slightly cheaper (on EV basis) than what Diageo paid for its 54% stake in 2013/14. 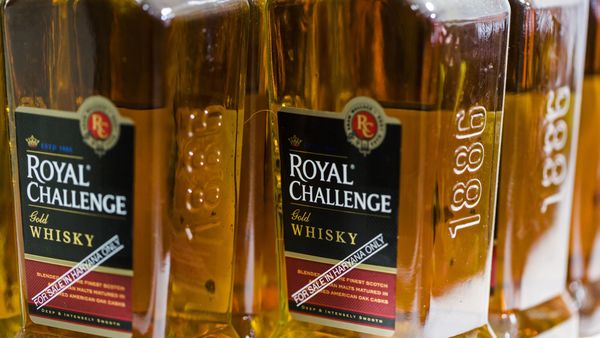 United Spirits' volume performance in Q3FY20 was the worst in the past few quarters.Consumption slowdown is biting into sales. Total volumes fell by 2% in the Dec quarter from a year ago 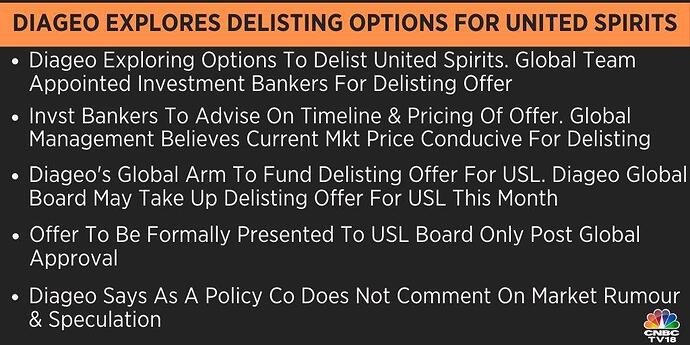 This delisting news is a very sad news indeed for Indian small investors. This is always the problem of investing in Foreign owned companies. They look for means to take value away, whenever possible.

As a long term investor, what should one do at this stage. Is it possible not to give back the shares of United Spirirts on delisting. If Yes, how can we reap value of those shares when business grows in future. How will valuation and selling done, when actually needed?

Seniors, need your inputs here. I see united spirits as an excellent fundamental growth story in India ever since management came under Diageo. And now, the same story is getting threatened by Diageo itself. What must we do as a small investor, if we wanted to hold this story for next many years, now that Diageo intends to delist. What should be right approach? @hitesh2710 @basumallick @zygo23554 @ashwinidamani @Donald @suru27 - It would be great to get your guidance and thoughts here and in such cases what is right thing to do.

ED holds some 7%, if I am not wrong, which was attached from Mallya. With this will they be able to delist.but if they do then is so sad. A MNC from abroad buys majority in India. Then de lists and takes out all profits to its parent abroad. May be legal but not ethical

This delisting news is a very sad news indeed for Indian small investors. This is always the problem of investing in Foreign owned companies. They look for means to take value away, whenever possible.

As a long term investor, what should one do at this stage. Is it possible not to give back the shares of United Spirirts on delisting. If Yes, how can we reap value of those shares when business grows in future. How will valuation and selling done, when actually needed?

Seniors, need your inputs here. I see united spirits as an excellent fundamental growth story in India ever since management came under Diageo. And now, the same story is getting threatened by Diageo itself. What must we do as a small investor, if we wanted to hold this story for next many years, now that Diageo intends to delist. What should be right approach? @hitesh2710 @basumallick @zygo23554 @ashwinidamani @Donald @suru27 - It would be great to get your guidance and thoughts

I think we should wait till it officially comes in… It won’t be an easy task to de list at this moment as even FII/FPI and DII who hold around 34 percentage of holdings would also won’t be a cake walk for getting shares tendered.

If they give up , I don’t think we have an option in that case… But yes price would be at much premium than cmp so good gains too

I agree to your points and understand that its not easy process, takes time, reverse book building process is also in place etc etc. But when a management is determined, they will have their way, sooner or later.
I also understand that my capital is not in trouble and it can give quick returns if delisting goes through, but that is not the primary reason of my investing in United Spirits. With a capable management, push for premium and growing Indian affluent class - This is a multi year story meant to be held on for long. Responsible premium drinking is what has made Diageo what it is today and United Spirits had just started on the same path. Global Diageo team knows Indian potential and hence the bid to delist.

Above story is threatened with delisting, where investors are forced to sell, even though at significant premium.

As it is, there are very few stocks which you can held on in India and not bother about sector trends and tactical plays etc. and if such stocks start delisting, then that’s a sad story.

Disc: Started accumulating United Spirits in recent falls. Plan was to accumulate and hold it as part of core portfolio. Evaluating what to do now.

@Investor_No_1 - Investors do have option to not participate in de-list process right? May be we may not get the disclosures as in a listed company.

Yes…90% shareholders have to agree