Tilaknagar Industries is into manufacturing and selling of Indian-made foreign liquor (IMFL).

They have 16 manufacturing units spread across 11 states- 4 are company-owned (1 directly and 3 through subsidiaries) and 12 are contract manufacturing (3 leased and 9 tie-ups).

They have done large-scale debt reduction

Initially, this was done through restructuring, one-time settlement with lenders and conversion of debt into equity shares.

But now, further debt repayment is being done through cash flows

This has led to sharp decrease in finance costs:

They are aiming to be almost debt-free by FY24

They made their first profit after many quarters in Q1 FY22

Importantly, this was without significant other income and has been sustained through Q2 and Q3 as well

Management commentary regarding intent to turnaround is very positive

Importantly, this helps their plant operate at a good utilisation level 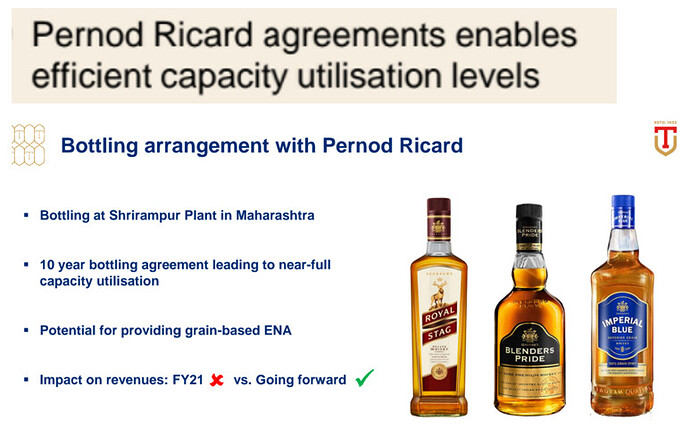 They have announced commencement of production of the Pernod Ricard brands

There is also a premiumisation trend with improving realisations

Recent decrease in promoter holding is not because of share sales by promoters, but because of dilution due to preferential allotment done.

There is also a hint towards improving corporate governance, since they want to actively resolve the multiple auditor qualifications. 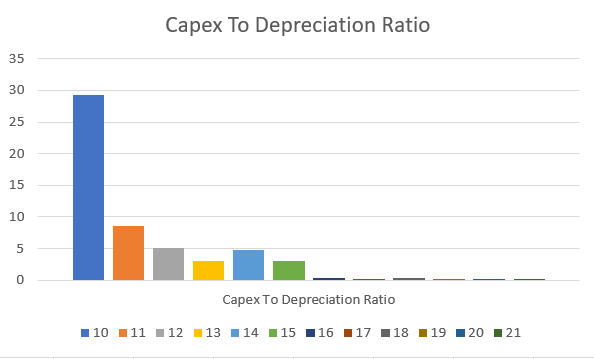 Hi Can you please tell me what does capex to depreciation convey?I didn’t get this

It is a ratio used by Marathon Asset Management, written in the book “Capital Returns”. Depreciation can be used as a proxy for maintenance capex. Hence, the ratio of capex to depreciation indicates the proportion of growth capex to maintenance capex. A high ratio suggests that a higher proportion of the total capex is done for increasing supply, which may be a red flag for a capital cycle analyst.

Okay Got it Thank you buddy

Not seeing any revenue increase in december quarter also

The management said the new plant will be operational from september 2021, right ?
When can we it show up in results and what kind of margin and revenue upside are we seeing from this agreement ?
Also hasn’t the stock run up quite a bit already ?

The management said the new plant will be operational from september 2021, right ?

Yes, they had said this, but perhaps due to some operational challenges, the actual production began only in Feb.

When can we it show up in results and what kind of margin and revenue upside are we seeing from this agreement ?

No idea on margin & revenue but since it began in Feb, there would be a minor contribution in Q4FY22 but major contribution from Q1/Q2FY23 onwards as utilisation increases.