Which picks gave long term loss as its supposed to give positive rturns over last 1 year due to bullish condition?

tips ind per kya view h at cmp ? what price will tips films expected to list?

Accumulated losses are from around the period just before this thread was started, so around 3 years old.

Tips already sold off, but showing good price strength! Digital sales may compound around industry average of 15%, not enough at current price. Not thought much about movies biz, had bought it for music biz getting better, so maybe exit is not quite right, but had to concentrate folio.

Thanks for the reply. I did not know that this Tesla is different. Thank you for pointing it out.

What’s ur opinion in recent carnage in RBL Bank ?

I’m cautiously optimistic, hence averaged recently. Have participated in Yes bank carnage before and managed to get out just before the lock-in, with a 5% profit for a month’s trading. An investor friend got stuck and he is treating the money as a fixed-deposit. He is a banker and knows RBI will always rescue and the bank will continue to run as a stable entity. All we have to do is guess the book value when buying such a biz, to save our capital. Yes bank was 10x worse than RBL when it went under. Do not think history will repeat here, panic is good time to buy, though such guessing can be avoided also, or position size limited. RBI looks like being more active this time, it has been more than 6 months since the scandal broke and bank has no divergences with improving figures with macros getting better too. Looks like RBI forced it’s own person as CEO, which may not be such a bad thing if at all reform is required.

Could you elaborate it using numbers, Vikas? It’s historical ROE ranges from 3~5%. Even if I consider the historical best PAT (858 Cr. in 2019) in the near future, ROE would be ~7% for the current BV. Such an ROE has been assigned 1x P/B for the consistent performer such as HDFC Bank in turbulent markets like now.

With lack of consistent historical profitability, I do not see a reason why market would value it far better than current P/B of 0.4.

I don’t think HDFC bank is getting valued at 1x P/B? I’m not going by numbers from past track-record. My thesis is based on next few months, or a little over a year, when current performance extrapolates. So, no significant ‘real’ adverse news pops up and the ‘scandal’ blows over. Hence, expectedly with help of slight macro tailwinds, the bank manages to claw back to its average past valuation.

HDFC (bank) is another on watch list, though may have to avoid it since ~30% of folio is now financials (by invested value).

If Carlyle takesn10% stake in Yes bank what is expected in next one year. Vikas ji Pls share your thoughts

I don’t think HDFC bank is getting valued at 1x P/B?

It’s my inference. In pessimistic times HDFC Bank got valued at ~2.5x P/B even though ROE used to be in the range of 18~20%. I used these two numbers to infer that ~7% ROE of the bank is valued at 1x P/B.

Not much clue here, looks like turnaround is done now, find more attractively priced bets, in terms of gains vs timeframe.

Thanks for clarifying! Indeed your numbers are good, that gives the reason for averaging my position in RBL. It should be able to scale from ~0.35x to ~1x P/B which is a considerable gain by itself while the book grows in size along with the profits. Higher risk-reward than HDFC bank, yes.

Sold off Globus, added big chunk to Godawari, little to Mirza, Ujjivan, Kilpest. Some stocks are trading below or close to my average buy price, hence the decision to average. Biggest reason is consolidating holdings, now 21, Globus was smallest holding, it is also slave to prices of crude and grains, difficult to guess margins, Godawari is trading quite cheap and has decent dividend too, may yield ~6% this year, cash flow machine.

Globus is a vertically integrated company, use byproducts to make ethanol, ROCE and ROE are healthy 30%, capital deployment is robust, Total capacity in June 2023 will be 1250 KLPD for ethanol and already doing bottling for major alcohal brands, local alcohal is very famous in Rajasthan and gin brand is catching up fast even covered in one of article related to growing gin market in India. Unibev is amalgamated in Globus and is guided by Deepak Chabbaria, have strong portfolio of malted beverages which will require large marketing expenses. In a long run this might go Radico Khaitan way, I have taken a position with 5% of PF seeing limited downside and long term prospects intact, might consolidate for some time before next run. Recession free business is main reason to keep it. 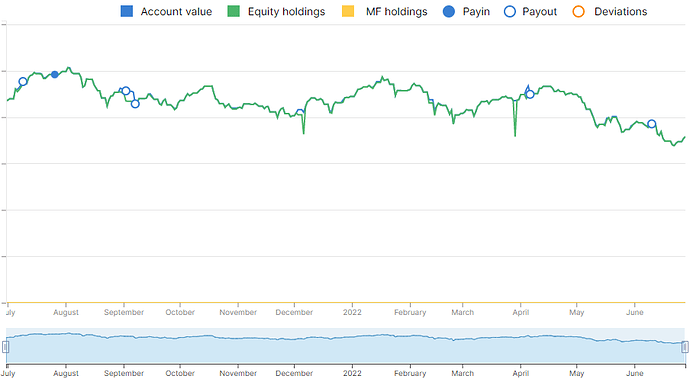 Two more withdrawals made, worth ~5% of total folio value, since last status update. Peak was in 2nd week of April with decline in value of ~20% since. Main reason for peak and decline were new entries like Mirza, Ujjivan Fin and old ones like Godawari and Sandur. Overall market trend in general also.

Not many could have predicted stagflation or recession risk or ukraine war in August 21 or January 22. At best I could have made an exit in April (each of the consecutive peaks have been ~1% higher). And yes, even with tax payouts, could have been a 15% gain compared to the bottom made. So, it does make sense when given multiple exit opportunities to at least make a partial exit, reckon about 50% exit would have been good, so 7% gain.

On the other hand, why bother with pennies. This is the conclusion.
Gains would have better with focus on timing exits from individual stocks.
And it gets difficult with more than 15 stocks to focus, hence the past few weeks have reduced PF from 27 to 21. Yes, there have been bad choices along the way, some speculative while narrative and earnings visibility should be essential, and greed should be less.

A quiet, compounding stock is much more the usual cup of tea for part-time amateur investors. Though I am still getting used to the idea, may have been lucky enough to pick up some along the way.

PS: This does not include Tips Films holding which is yet to start trading.