Tatva Chintan - A catalyst for growth

In chemistry, reactions often require very specific conditions. Changing your background conditions (such as temperature) affects the rate of the reaction, the kind of by-products formed, and even different final molecules. Organic chemistry is an art for this reason.

To make your life easier, one employs catalysts. Almost every single chemical made in the world uses them in some stage of production. The basic idea is that their use significantly improves reactivity and required conditions.

Tatva Chintan makes one subclass of catalyst known as a phase transfer catalyst.

Phase-transfer catalysis (PTC) is a powerful tool in many areas of chemistry. It is a technique for conducting reactions between two or more reagents in two or more phases, when reaction is inhibited because the reactants cannot easily come together. A “phase-transfer agent ” is added to transfer one of the reagents to a location where it can conveniently and rapidly react with another reagent.

This is echoed below in the DHRP. They claim that a push in green chemistry will lead to the increased adoption of such PTCs, as they reduce by products.

Phase Transfer Catalysts have evolved over the years from merely being an agent used during chemical transformation to a more useful catalyst which is following a still sharply‐increasing learning curve, with the development of new uses, methods, concepts, theoretical development, and world‐wide recognition. The future of the product is expected to be bright, not through its simple extension to old chemical reactions but because it provides a tool to handle future chemical problems in highly material and energy‐efficient ways.

There is a type of catalyst known as a zeolite. It has the special property of being like a cage, trapping a certain target molecule and allowing for micro reaction sites.

Tatva Chintan makes an agent used in the production of these zeolites, known as a structure directing agent. Here’s a representative image: 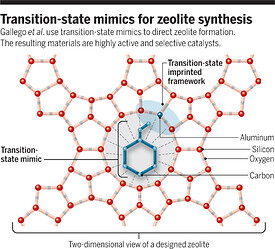 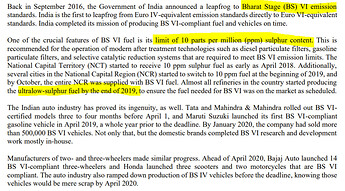 The DHRP doesn’t tell us enough about the speciality chemicals made by Tatva Chintan. Some highlights:

Tatva Chintan’s products are used in supercapacitors. According to their pre IPO interview, these supercapacitors are not substitutes for batteries, but are used alongside them, whenever you need a large storage of energy which is to be used in short bursts. The management said that they’re used in stop/start buttons in a car, and in renewable energy grids, as voltage stabilizers, absorbing high fluctuations. 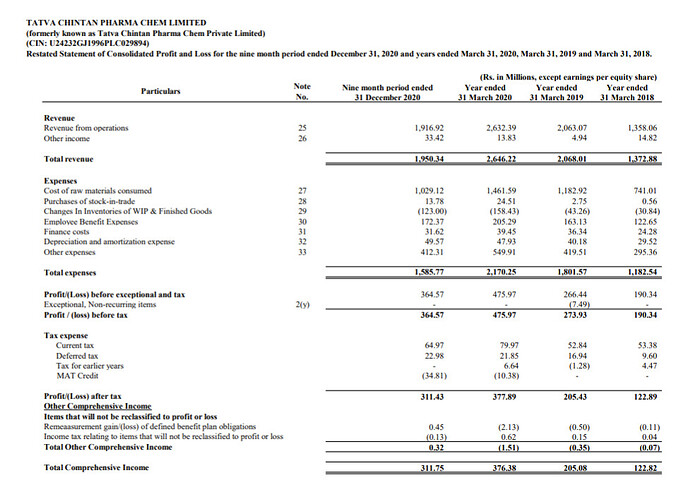 The following table speaks highly of the quality of their products, with less than 0.25% of products returned:

Very interesting company that’s truly into green chemistry. Produces intermediates that are important not only to reduce emissions, but to improve efficiency for relevant manufacturers. A lot of their product portfolio is the direct consequence of invested R&D, and there is significant headroom for growth in electrolytes and other business segments. 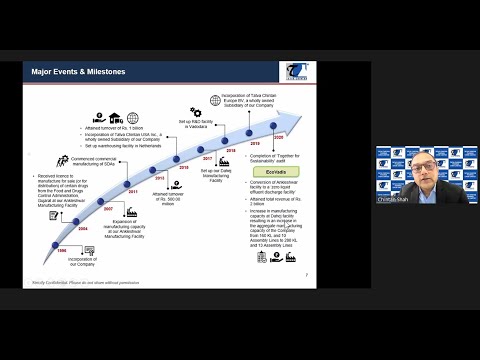 Disclosure: Considering investing depending on listing valuations, not a recommendation.

Inviting others to share their notes on the business and management. Thread is a work in progress, will add further notes in a while

Thank you sir for such detailed information.
In valuation segment can you please add competitors if possible ??

The competitors have been spoken about at various points of the DRHP.

On the Zeolite segment:

With extremely few players in the Indian and global market, the company is the largest and only commercial manufacturer of SDA for Zeolites in India. It also enjoys the second largest position globally.

In the PTC segment:

Competitors in this segment include Sachchem in the USA, Tokyo Chemicals and Nippon in Japan, Dishman group in India, Solvay in Belgium, and Volant-Chem from China.

The speciality chemicals segment doesn’t have as much disclosure in the DRHP, I haven’t studied the exact product list, but if they’re into agrochemicals and speciality amines, listed players in this space (ranging from Deepak Nitrite to Alkyl Amines) could be potential competitors, but we need a product list before we can say more. 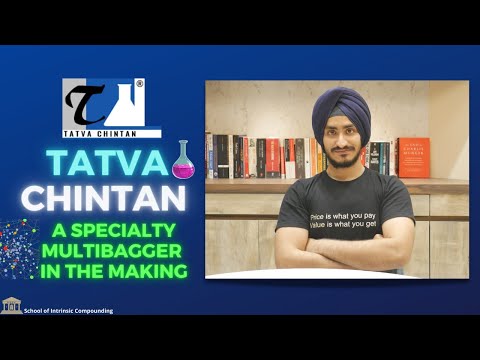 Deeply impressed by the company but not confident about the market size of the opportunity. It seems to be a market leader in a very niche sector, seems more like a cash cow in BCG quadrant. Will continue to follow the sector growth more than anything and then decide.

but not confident about the market size of the opportunity.

This is not true. Look at global market & their revenue as a percent. There is at least a 100x opportunity topline wise. They dont even have 1% share of global market. They dominate indian market not global. Also recently looking to ramp up US and EU sales, so the opportunity is actually getting realized.

We are expanding capacities by nearly 80% and our margins are sustainable:...

“We are forecasting certain growth for which we are expanding the capacities. These capacities will come into play from early December of 2022.”

Thanks for sharing your view. I actually did the calculations again and below is the data:
Global market size
PTC : USD1 Bn
SDA: USD 1 Bn
Electrolyte: USD 2.4 Bn
Supercapacitor: 1.4 Bn
I am excluding speciality intermediates which forms 30% of sales since could not get much data about market size of the products they are in. Glyme is the top product for them for which they are 3rd largest producer in the world.
Considering remaining 70% of sales, it means they do USD 28 Mn in USD 5.8 Bn market implying around 0.5% market share which provides a great runway for growth. Plus business of speciality chemical will add further. Current PE of 100 maybe irrelevant if this growth actually comes through, not suggesting i will buy at current levels

Current PE of 100 maybe irrelevant if this growth actually comes through, not suggesting i will buy at current levels

This is actually only optically expensive.

Imo it’ll be closer to 60 not 100. It only looks optically expensive due to the covid disruptions which won’t happen against next year.

I still chose not to invest because even 60 is too high a earnings multiple to pay in my books. I could be wrong. But need more conviction on the longevity of growth before I decide to pay 60 p/e for a company.

Current PE of 100 maybe irrelevant if this growth actually comes through, not suggesting i will buy at current levels

For good stocks, when it’s already Q3, it’s better to start factoring in current year results and see the valuation from that perspective. In Q3, (after Q2 results are out) one will have half the years earning to make a more reasoned and educated guess about the full year earnings and current PE.
May be the multiples are now at 40-50x current year ?

Yes if you annualize 20 Cr PAT it is around 60 PE. 100 PE on trailing and 12X sales which is overvalued for me specially for a company which has just entered public markets, confidence build needs time to buy at such valuations.

Agree thats what i mentioned if the growth continues it becomes irrelevant, entire question is around the confidence one has on future growth.

entire question is around the confidence one has on future growth.

Q1 call provides some very good perspective on this. How the company prepares itself based on the forecast system from it’s clients. How the capex are put up keeping in mind this forecast etc etc… suggest reading that. One can get much more clarity on this aspect. But of course nothing like doing scuttlebutt and confirming the same from independent sources.

Yes i did go through the DRHP and listened to their pre-IPO pitch and Q1 call. Generally forecasting system like ARIMA, R programming works well for stable demand scenarios like in FMCG or for autos where it is derived demand basis the production plan of final products. Hence top FMCG cos. operate at 35-40 days of inventory and autos are on JIT. I do not have internal data for company to split total 170 odd day inventory into RM and final product but it seems high to give meaningful importance to forecasting system etc. Generally B2B companies maintains high inventory not to loose any order since the demand is lumpy. With upcoming capex they are going to increase capacity by 80% which gives confidence on demand scenario. To me there are 2 risks 1) The large China business which is vulnerable to geopolitics 2) The products are in highly innovative sectors and innovation can be disruptive for innovator as well if someone comes up with a better alternative. Personal thought : It does not take much weight in my thought process if i like a company if it is at 70 vs 100 P/E if growth justifies it and probability of it sustaining is above average. Yes if its a call between 20 and 100 it becomes a big factor. Hence i think of valuation looking at alternatives and not in absolute. Thank you.

I never buy a stock even if it is fantastic if I dont find a MOS. In a bull market themes, stories take precedence over earnings. Hence a very high valuation is justified. One has to be careful about this.

stable demand scenarios like in FMCG or for autos where it is derived demand basis the production plan of final products. Hence top FMCG cos. operate at 35-40 days of inventory and autos are on JIT.

I guess, I got slightly mis-understood. We started from having some kind of view on the future growth potential (say for 1-2 years) and thereby making some safe assumptions about the earnings & earnings multiple for FY22 & FY23. My reply to that point was, their capex plans to increase production by 80% gives us some view in this regard, since they don’t do capex without a good guidance/forecast from their customers . Am not sure, if the point about inventory is relevant in this context. Yes, FMCG, Auto have different and lesser inventory taking into account their proximity to supplier base, nature of product etc.

My understanding here is, say, if customer X has an annual requirement of a chemical for 100 cr. which was being sourced from, let’s say, 3 vendors, in ratio of 20:40:40 and the least amount being from Tatva. So everything else being equal the customer does have the data in hand to ask Tatva to be ready with production capacity for 30 cr next year and 40 cr next to next year as he intends to change the purchase ratio between his vendors.

See these 3 snippet from last concall, you can relate to what am saying. 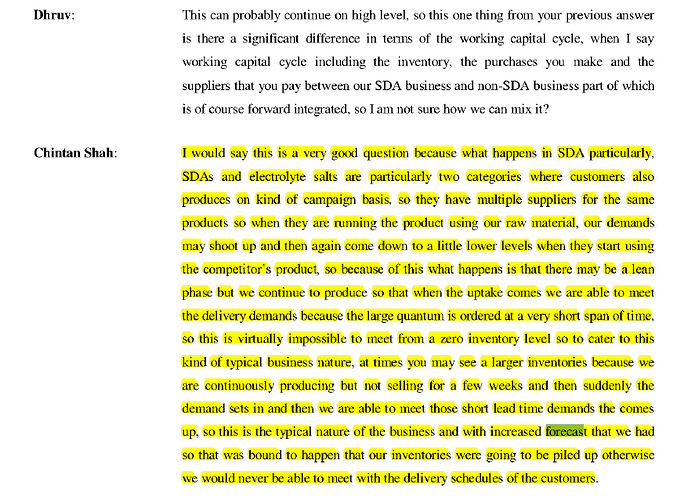