NOTES FROM AR 2017
Tata Global Beverages (TGB) is a natural beverages company with brand presence in over 40countries. As the second largest tea company in the world, with a growing interest in coffee and water, TGB is home to a stable of innovative global and regional brands, including: Tata Tea, Tetley, Himalayan natural mineral water, Tata Gluco+, Good Earth tea, and Eight O’clock coffee.
• 2nd Largest player in branded tea in the world
• 20,000+ SKUs produced across tea, coffee and water
• 40+ Countries with significant brand presence

BRANDS
• Tata Tea - Premium, Elaichi Chai, Chakra Gold, Gold, Teaveda, Kanan devan, Gemini, Agni
• Tetley - Presence in UK, France, US, Canada, India, Australia, Middle East, Poland
• Good Earth, Jemca, Vitax, Teapigs, Joekels
• Coffee - Eight O’Clock, MAP, Grand Coffee, Tata Coffee Grand
• Water - Tata Water Plus, Tata Gluco Plus, Himalayan
• Company has entered the new Asian markets of Singapore, Malaysia and China, which are large tea consuming markets. The company has entered a tie-up in the e-commerce channel in China to focus on the business-to-consumer (B2C) category.
• Co has undertaken a multi-year extension of its partnership with Kuerig in US, for the manufacturing, sales, licensing and distribution of the EOC coffee and Tetley tea brands in K-Cup pods for use in Keurig brewers
• Tata Coffee Limited, a subsidiary which operates in the non-branded business, announced the setting up of a state-of-the-art Freeze Dried Instant Coffee plant in Vietnam with an installed capacity of 5000 MT per annum.
• Tata Starbucks our 50% JV had opened 91 stores; performed very well in the current year with double digit growth

Premiumisation
• Tetley Indulgence launched in the UK is a range of black teas in indulgent flavour twists such as cookies & cream, chocolate mint, gingerbread, and spiced apple.
• TGB collaborated with Starbucks to create a signature innovation, India Spice Majesty Blend especially for the Starbucks Teavana™ portfolio in India
• Himalayan natural mineral water - launched a sparkling variant in select channels and also piloted ‘Orchard Pure’ flavoured water
• Tetley now outperforms the herbal tea category’s growth- Tetley +19% vs Category +6% (as per Nielsen study)
• Promoter shareholding is 34.4%
• Institutional shareholding is 33.64%
• In the process of divesting the Instant tea business in China. The decision to divest was taken mainly due to the marginal nature of the business and under-performances as compared to plans. 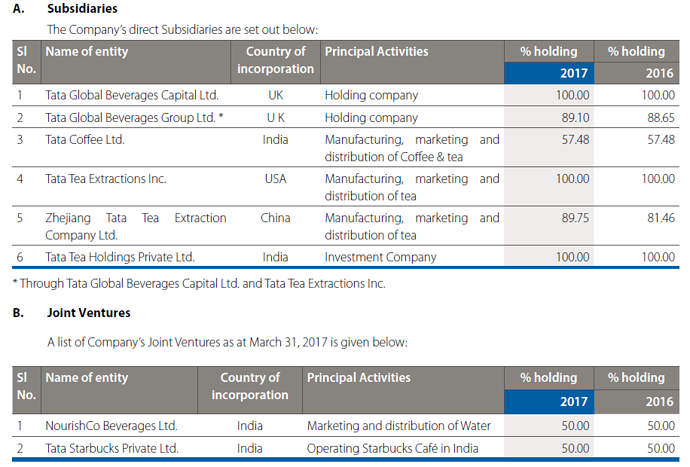 India Business: - India business grew by ~4%-5% which was impacted by GST transition
• Gluco-D have witnessed steady acceptance from the consumers
• 50% tea consumed and sold in India is branded tea.
• Tata Tea Elaichi growing at robust pace
• Tata Coffee Grand gain shares with new variants
• Launched Fruski on a pilot basis - a tea based RTD.
• Starbucks currently operates in 95 stores which will be start generating EBITDA profit in next ~1-2 years
UK business:- Strong performance in UK driven by growth in market share across major categories despite sustained decline in overall tea market and continued competitive intensity. Green tea continue to grow well. Teapig the super premium brand posted good growth
Bangladesh has witnessed robust growth in Q1 FY18 with record profits in Q1 FY18.
USA - Promotional phasing and higher commodity costs impacted performance of EOC business in US during the quarter. Tetley green tea reflects modest growth despite decline in category.
Russia was a loss making unit which have been restructured, going ahead performance from international business will improve.
Non branded - Topline declined due to reduction in sales volumes of instant coffee and plantation products (impacted due to lower crop and lower export realization due to stronger INR).
Tata Coffee infused in aggregate an amount of US$6 million (mn) on greenfield freeze dried instant coffee facility in Vietnam
Canada witnessed an improvement in the topline. The company continued its value and volume leadership in the country. It also launched Tetley RTD in three flavours - Lemon Ginger, Peach mango and Pomegranate Berry
In order to drive its performance, the company has come up with strategic priorities, which include base business rejuvenation, investment for growth and driving operational efficiency.
The company intends to invest in incubatory businesses - Starbucks and Nourischo to drive future growth. Under Nourishco, the company has launched variants of Tata Gluco Plus, Himalayan flavoured & sparkling water. Nourischo has witnessed traction in the operating profit.

DISCLOSURE
I am invested. My views may therefore be biased. Please do your own due diligence before investing.

What is changing is not path-breaking just routine corporate stuff. Though market perception during last few quarter has changed a lot which is probably as it is one of the stock which did not appreciated much during bull run and stock appear cheap compared to other top notch FMCG stocks. But to have significant appreciation there has to be significant reasons and growth/earnings visibility which i find missing.

At current prices (Rs 205), the stock is overvalued.

Agree. Something like ITC at 30 PE seems to be far better which much larger basket of products, superior RoE and growth.

Tata Global has not been able to cash on opportunities and most of the sale comes from commodity, stagnant and highly competitive biz of black tea. e.g. Tata Water - I don’t see it in shops nor there is any awareness or adv.

Needs to get far more aggressive to justify these valuations.

@basumallick
Dada, you have explained the business beautifully. But it fails to excite when looking at metrics like ROE, Sales growth, a handful of brands. PE of 27 and Mkt Cap to Sales of ~ 1.5 for a FMCG company is not too much actually. Request your views as to what has changed or will change for the company from here on.

The beauty is always in the eye of the beholder

The interest for me is I see TGB as a turnaround story. So, once the business starts improving, all the corresponding numbers will also improve.

Only concern is Tata Group has not able to manage any of its so called FMCG business in a true FMCG manner. They miserably failed till date.

ITC came out because they were managing Cigs , knew the distribution stuff although it is monopolistic in nature but just see, how they failed in Information Technology , Hotels, Papers etc.

Going by the recent disinvestment in stake held by TGB in Tata Chemicals, rationalization of foreign operations and the reduced losses in the JVs, I think has the trappings to be a value investment at this point of time.

Tata Global Beverages, the world's second largest tea company, today announced the pilotlaunch of its first tea caf "Tata Cha" here. With this launch, the company said it was evaluating the out of home beverage space in the country. "It is our

“It is our first entry into retail space; this is the pilot project we are starting with. We are planning to open four stores in the pilot phase in Bangalore. We will then consolidate, understand how the pilot goes, before we think about what the next step should be,” Tata Global Beverages Regional President Sushant Dash told reporters here.

The first was this was a growth segment as eating out had been growing at an exponential rate; second – 70 per cent of consumption in the country in terms of one drinks as beverage even out of home was tea.

“The idea behind was to match the two of them given that people are going out, people drink tea, and Tata Global Beverages is best positioned to bring tea to customers, so we thought of getting into retail space and talking of tea caf,” he added. 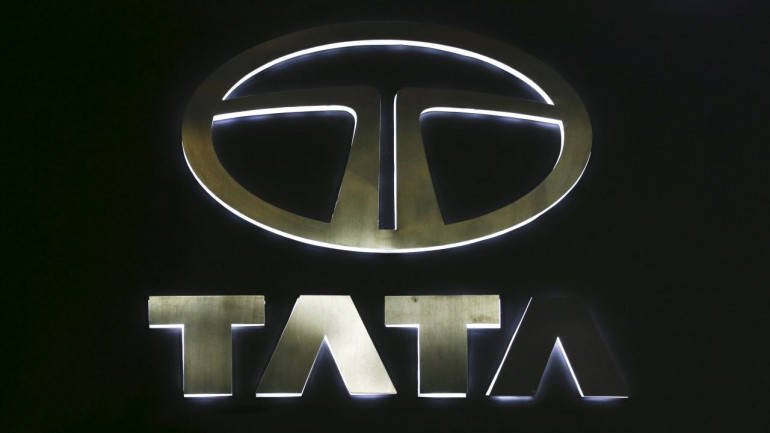 Tata Global Beverages (TGBL) has completed the sale of two of its subsidiaries in Russia - Sunty and Teatrade - for 375 million roubles (about Rs 41 crore). TGBL in August announced sale of its business in Russia as part of restructuring operations... 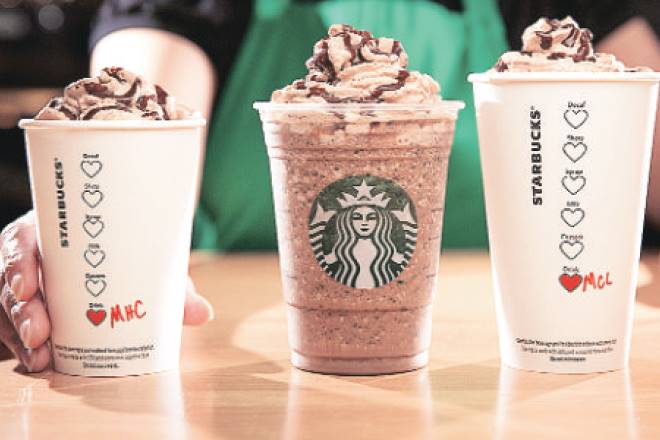 Five years and 100 stores later, Starbucks continues to focus on growing its footprint in India as it launches in Kolkata, while introducing some new initiatives for growth.

Starbucks to enter Kolkata with three stores in 2018. disc: Not invested stock is overvalued based on liquidation value *125% and prefer to wait till Mr Market offer this at bargain value as seems to high P/E
Regard

Just read an article on how the stock has gained 95% during the period with its market capitalisation nearly doubling to over Rs 18,200 crore. 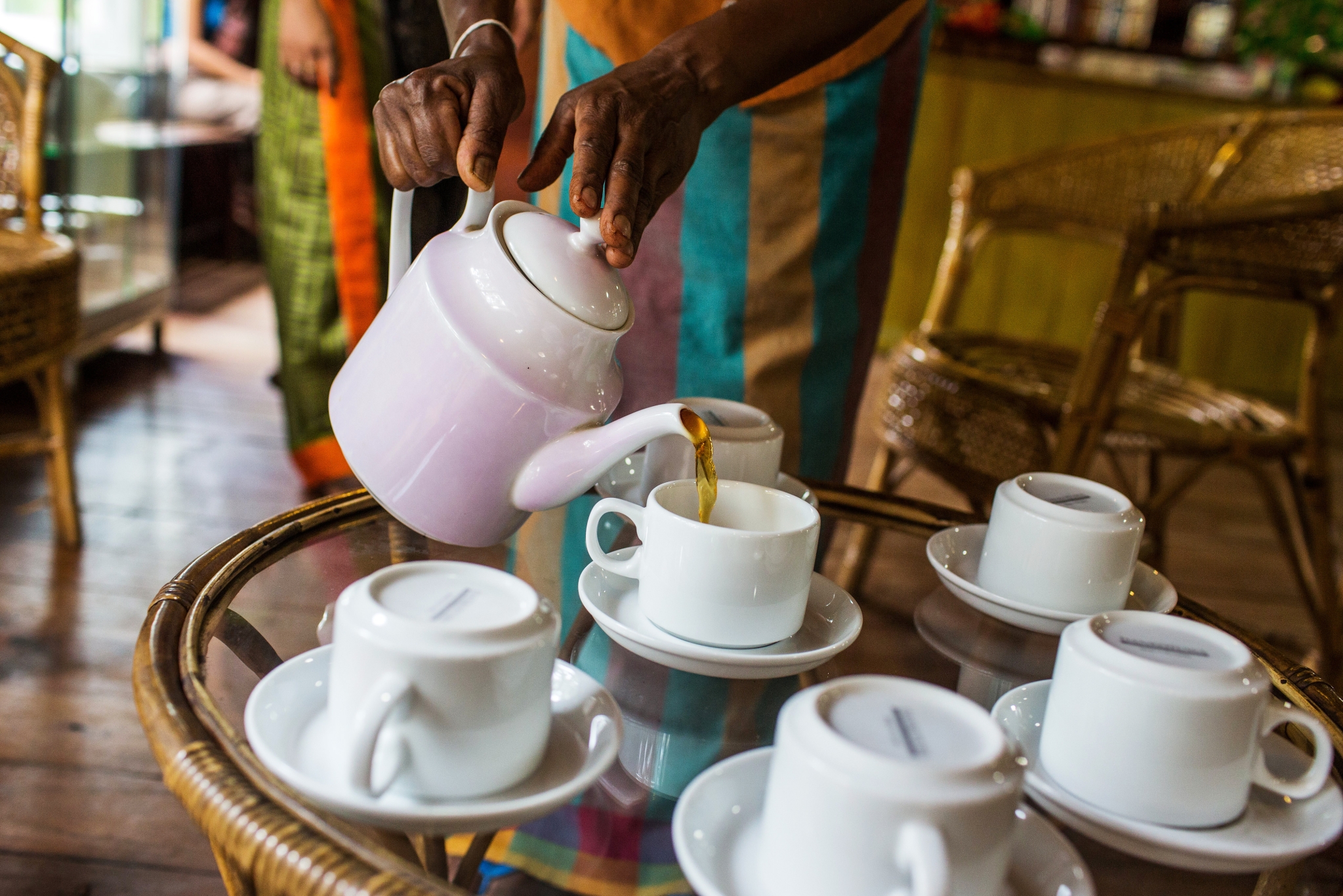 This will be the longest winning streak for Tata Global Beverages.

Read an article on SeekingAlpha which makes a case for India among the top 5 market for Starbucks over the years.

India is a country with promise for Starbucks. Its young population and fast-growing economy provide the strong fundamentals for higher consumption. Higher digi Tata Global Beverages will sell its stake in joint venture Estate Management Services, the managing agent for the Watawala plantations, for Rs120 crore

Starbucks India getting a whiff of tier II cities

After setting up 106 stores in metros over the past five years, Starbucks India, a 50: 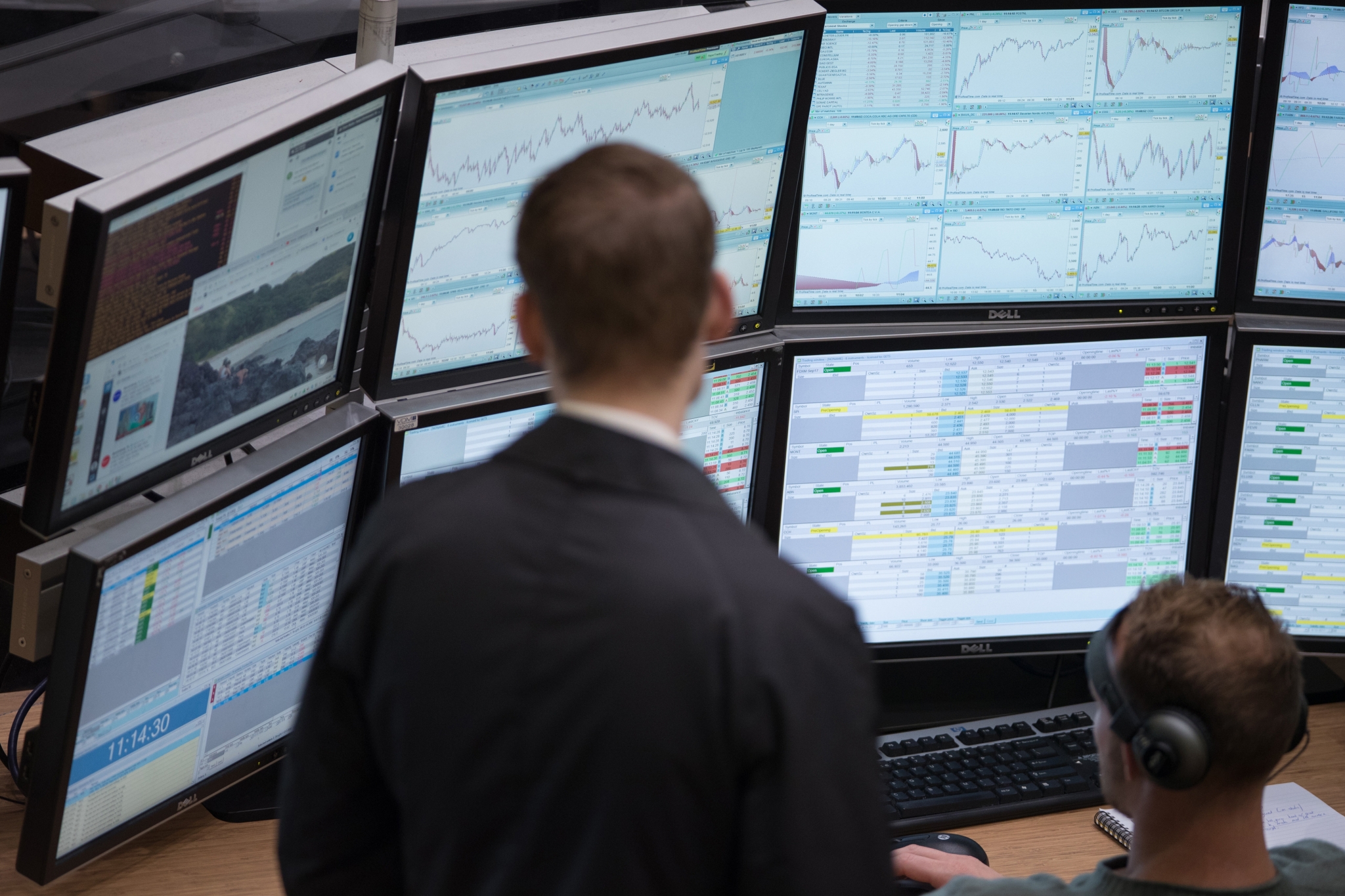 All You Need To Know Going Into Trade On Feb. 5