just gone through the thread in twitter. so can we expect some derating once they hype is dried up and company continues linear growth ?

Let us see what the management has said about Mangalore from time to time.

As early as in the DRHP filed by Syngene in April 2015, Mangalore was mentioned. “We are in the process of setting up a manufacturing facility in Mangaluru to manufacture novel small molecules for companies in pharmaceutical, agrochemical and other industrial sectors”.

The FY16 Annual Report goes into the details about this – “We will invest USD 100 mn in the upcoming commercial scale manufacturing facility taking shape at Mangalore. This facility is spread across 40 acres in the Mangalore SEZ. It will manufacture Active Pharmaceutical Ingredients and Intermediates (API); non-pharma novel molecules including advanced intermediates, agro chemicals and performance / speciality chemicals meant for supplies in various scales. The API facility will be designed to develop processes for pre-clinical, clinical and commercial launch scale material. Other capabilities will include scale-up of the product from lab to pilot and commercial manufacturing. The facility will meet national and international regulations and shall be built as per cGMP and other appropriate regulatory guidelines. We are currently in the process of obtaining necessary permits and regulatory approvals to commence building and this facility is expected to be operational by FY19”’

So the facility was expected to be “operational” by FY19 – i.e. after 3 years. In reality, the facility became operational a year late in end FY20 (that’s ok) but then the management said “facility is ready but regulatory validation and qualification will take time”:

See July 2020 concall – “The real priority for the year is, having now completed the building stage … is now to complete the qualification. So, the order of the hour through the rest of this year is qualifying the plant and then also starting to win those sorts of regulatory inspections and approvals”.

This “qualification” consumed another year. But then they said qualification is done but regulatory approval is not !

Annual Report FY21 – “Towards the end of the financial year, we completed the qualification activities for our API manufacturing plant at Mangalore and the facility has been awarded GMP certification by the Indian regulatory authority. The focus is now on gaining other key regulatory approvals over the next two years”.

Whoa! Wait for regulatory approval which takes another two years. Why couldn’t all this be done faster? It’s already 5 years since work on Mangalore started…

This was answered in July 2021 concall – “You can’t trigger that until you’ve got a product. We’re signalling to you now that we’ve got at least one program in place that, will take us up to 24-months to complete and by then we’ll be at the point where the regulators would want to come and inspect it”.

This “trigger” event is now expected by end - FY24.

Annual Report FY22 – “The Company has small molecule commercial manufacturing facility in Mangalore. The Company remains focused on securing USFDA and other major regulatory approvals for the facility. The approval is expected in FY24”.

And after that also, there will only be a gradual scale up which will take at least 3 – 4 years to achieve full revenue levels.

One can count how many years this is from April 2015 when the company first spoke about Mangalore. Market seems to have been “pricing in” Mangalore since eternity. I totally agree with what @ankush12495 has said in his Twitter thread. The reader can decide for himself if this is simply investors’ ignorance of how this industry works, or the company is guilty of selective & limited disclosures, letting the misunderstanding persist. Draw your own conclusions.

Facility was announced in FY15. However, if you check the construction only started in second half of FY18.

From the annual report

Secondly, coming to generics. Again if one reads FY21 annual report. They have mentioned till the time NCE molecules scale up and commercialize, they will Manufacture generic molecules in non regulatory space

Without any nce molecule to Manufacture how can one trigger an audit? One can only get audited by the customers till then.

+What I’ve observed that asset build up and scale up phase in Pharma takes a lot more time. Eg:- Laurus took full two years to utilize the built up gross block which was lying idle. Neuland still hasn’t been able to increase Utilisation of Unit 3 inspite of it being commercialised.

Compare this to Agro, Syngene management itself mentioned Agro is much more industrial. PI keeps setting up new plants, Astec, BR, Srf and Navin too! Lead time to capacity utilisation is much lesser.

Disc:- not invested in personal PF. Family members do hold it.

Conc:- Maybe it’s not a J curve story. With Cro growing in mid teens and Manufacturing verticals being added on the top. What needs to be pondered upon, is whether the growth will accelerate to early 20s or mid 20s. Given the quality of the business (high margins+Cash conversion). Only in this scenario one might make reasonable returns.

Here are my thoughts.

Disc: Invested in both Syngene and Suven.

Now ,thats a sizable deal, takes Syngene at next level - both capabilities and scale. Well done!! 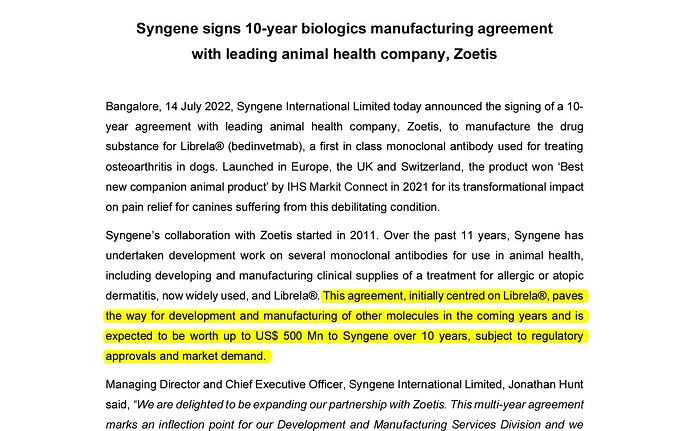 Just to give more perspective on the opportunity size- 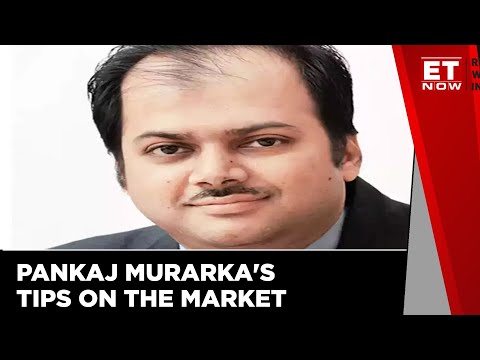 CRAMS will not take that longer to mature, like IT has taken several decades. Market is quickly responding the trasformation.

I think this is a flawed comparison. The scalability of CRAMS is nowhere close to scalability of I.T. There was a time in the late 1990s when people used to joke that Infosys had a board outside their office which said “Caution: Trespassers will be recruited” !

Even the current I.T. boom is something similar. In I.T., you can recruit someone, give him a laptop, run him through a six-month course on coding and put him on the job. You can’t do this in CRAMS. There are several challenges, such as skill sets, physical infrastructure, regulation etc. Surely CRAMS will grow, but in slow motion (compared to I.T.).

Most important of them all is- uncertainty related to which molecule will be a blockbuster and which one won’t be. At the end a lot to do with how lucky you get.

Eg:- Pi’s plenty of growth in export is driven by Pyroxasulfone which is known by the name of Axinfeev and is a blockbuster molecule (research reports+export data)+ Agchem is a lot more industrial

In pharma, one has to keep increasing the funnel of molecules on which the co is working. Who knows which one will be epic. It comparisons are flawed due to this uncertainty of success. As gestation period is even higher than agchem 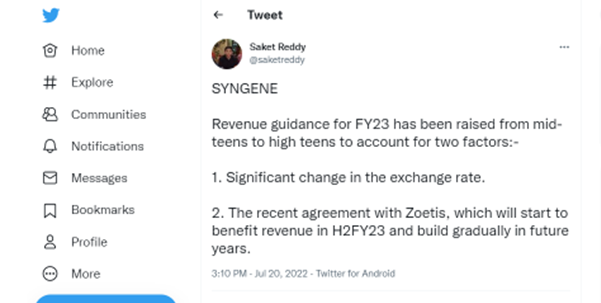 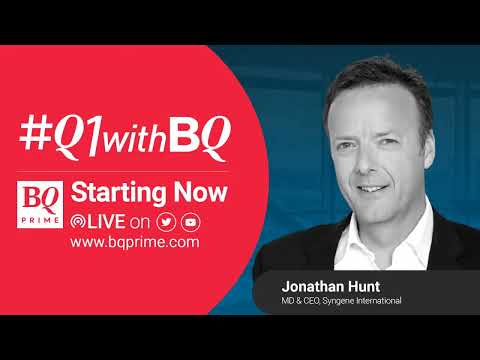 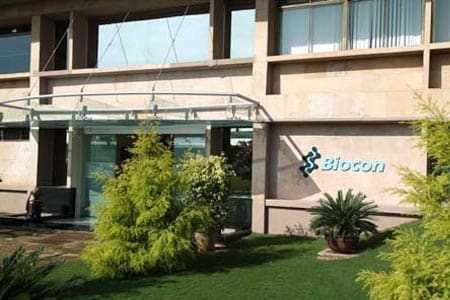 Biocon likely to sell a portion of stake in Syngene International: Sources

The company holds 70 percent stake in the Syngene International.

I was comparing the staff cost of Syngene with Suven Pharma. Found that Syngene’s staff cost was 28-30% of their revenue, whereas Suven’s was only 8%. What could be the reason for this difference?

Suven is primarily into manufacturing where as Syngene does contract research as well. Both are not comparable companies.