It was an upbeat commentary from management with following key highlights

Their endo acquisition playbook shall start playing out soon with this ! 21 mn USD market opens up !

after buying the shares , this is pledge declaration , so is it something shares were purchased on loan and now loan security is based on this pledge , can someone please clarify significance if these events ( could be a novice type question as ive little understanding on these transactions , pls flag/delete if not adding any value, thanks)

He purchased 1.55 lakh shares and has now pledged 62000 shares. So it is unlikely that the entire purchase was on loan for which present pledged shares are acting as security. He could have pledged his shares for any reason, and potentially to apply to the equity warrants that they are going to infuse at about 50% premium to the present price. No point speculating in my opinion.

The purchase of a decent chunk by Arun Kumar is a big positive in my view, especially in the present times of peak pessimism.

Disclosure: Invested and adding. Not a recommendation.

Have we worked out the effect of the recent sanctions on the Stelis story?

We know almost all of Stelis’ vaccine manufacturing capabilities went into producing 400 million doses of the Sputnik vaccine last year.

In Q2FY22, things were looking up, as they had solved the scaling problems mentioned higher up in this thread, and were tactically focusing on the Sputnik light contracts:

As of Q3FY22, management reaffirmed this stance.

The story looks to be that Sputnik was the main path to profitability, allowing Stelis to achieve breakeven. They were going to eventually shift away from covid vaccine manufacturing to gene and cell therapy, transferring capabilities and leveraging the new CEO’s network. Now in the previous concalls, Mr. Arun Kumar said that the details of the contract such as payments and the effect on the balance sheet was confidential.

The recent sanctions on Russia question the RDIF’s ability to meet its financial obligations. The IDMA has said that receiving payments from Russia is now difficult, and likely to drag on for a while. This calls the entire contract with RDIF into question, and the future of the Sptunik vaccine. One asks if any dues need to be written off, and how much consideration Stelis received before Q3’s concall.

As a corollary, the plan was to list Stelis after it became profitable. If profitability is now delayed on account of the sanctions, it’s dependent on new CDMO contract wins with other clients. One also wonders if the timeline for listing will be pushed. 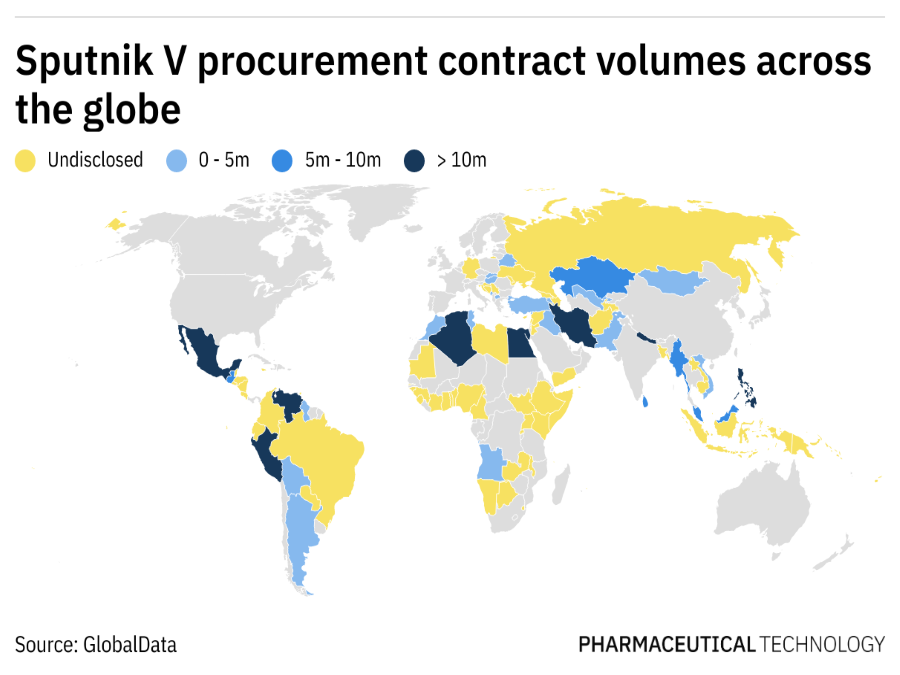 Russia sanctions: what next for Sputnik Covid-19 vaccine production around...

The Russian invasion of Ukraine has knock-on effects on the Covid-19 pandemic as supplies of Sputnik V vaccine to Asian, African, and South American countries are now in question.

Inviting comments from those that have tracked this closely. It’s amazing how much bad luck Strides has had in the last year.

Promoter is buying from market ( and constantly pledging). Seniors, I dont get this logic of pledging just after buying. They are pledging with Kotak and IIFL. Is it “Heads I win, tails I dont loose” pledge shenanigan?

Hve anyone noticed this?

I think they are trying to increase their shareholding at the weakest point (price) by buying under leverage as they need only 50% cash to buy stakes in the above way. Just my hunch, I always thought Arun was very close to jumping ship after taking stellis public if this war did not happen. Now with the RM margin crunch, the Sputnik issue adding up to the long list of issues, as @Chins already told I cannot imagine how much bad luck this company can accumulate

Disc: Been buying, I Will buy more too. 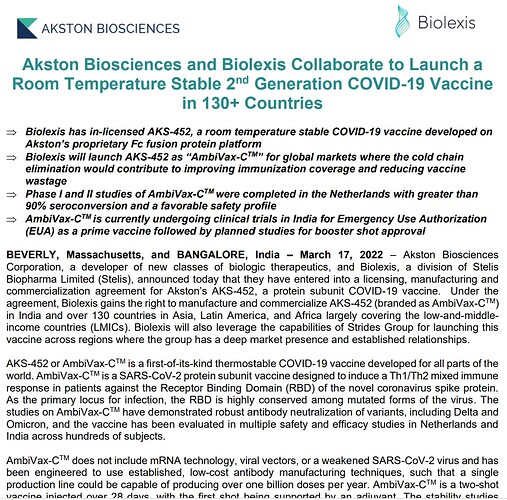 All vaccine infrastructure is Fungible in nature, I think both Strides and Gland (who own the highest volumes) might loose big on initial investments. But this opportunity gave them to setup the much needed infra to take up future opportunities. More than infra. the technical know how and build the team and ready for next set of opportunities. Gland and Stirdes both mentioned this many times in their calls they are actively looking for Bio CDMO opportunities.

Apologies @Chins for not being able to respond to this earlier. The past few weeks have been a bit crazy at work and for the first time in the last two years I am realizing how difficult it is to do justice to investing with a full time job!

I pretty much agree with all your points and unfortunately have no more information. The ability for RDIF to make good on pending payments, if any, and the future of Sputnik as a whole are now completely uncertain. Like you mentioned, Arun Kumar has been extremely cagey about divulging details of monies received so far so unfortunately there is no way of knowing where things stand on this till the next concall. It is also likely that the operational break even achieved recently will fall back and the path to profitability will be delayed. I will not be surprised if the demerger gets delayed too. The bad luck just doesn’t seem to go away!

Most of this uncertainty, and more, is priced in though in my opinion. Especially with contributions starting to come from Endo facilities and the slow easing of price erosion that Arun Kumar spoke of in the last call. Also the pending 500+ crores from Arrotex due in March will help the cash flow situation. Hopefully this money will be used to repay some debt.

Arun Kumar certainly does believe that the bottom has been made which is evident from his trading activity in the past few weeks. I guess wait and watch is the only sensible approach for now.

Ananth quits in 2 years and that too when things were looking to bottom out, and turn around was supposedly around the corner. Arun Kumar’s statement that drug prices have hit their bottom, and they had completed acquisition of Chestnut facilty, it appeared that finally something was to happen. And now you get this news which casts the shadow on near term performance and strategy going ahead.

All three erstwhile Arun Kumar companies have had CEO changes in the past few months.

Is this a coincidence, or a planned strategy?
Did they all quit or were they asked to go?

There is no way of answering these questions till one hears from the company, probably on the next concall. That said, Arun Kumar is coming back into an executive role is a welcome step in my opinion. This does lay to rest, at least for the medium term, speculations of him wanting to take an exit and focus only on Stelis, which has been the popular theory for a while.

In my opinion, there is no point speculating. Best to wait and watch. 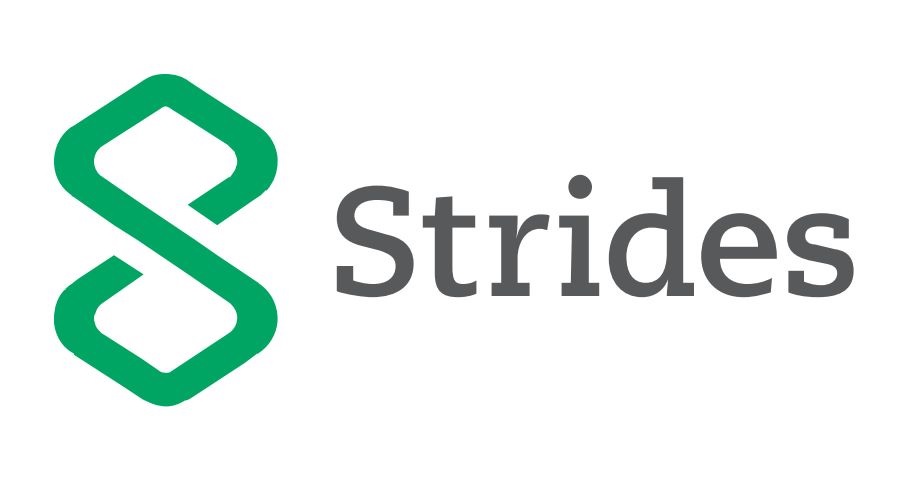 Strides Pharma Science Limited, today announced that Dr. R. Ananthanarayanan has decided to depart as MD and Chief Executive Officer of Strides, effective March 31, 2022, to pursue his personal interests outside the organization.

EQUITY WARRANTS TO BE ISSUED ON PREFERENTIAL BASIS

Did the company ever declare to the exchanges that there’s been a change in leadership?

This was the news those invested at the time welcomed as a positive step. A reputed CEO moving to Bangalore, who would help scale Stelis.

His Linkedin tells us that he’s no longer at Stelis. 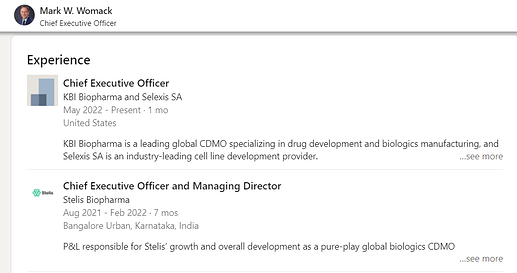 Update from two months ago:

The recent sanctions on Russia question the RDIF’s ability to meet its financial obligations. The IDMA has said that receiving payments from Russia is now difficult, and likely to drag on for a while. This calls the entire contract with RDIF into question, and the future of the Sptunik vaccine. One asks if any dues need to be written off, and how much consideration Stelis received before Q3’s concall. Company just put out a statement regarding this. 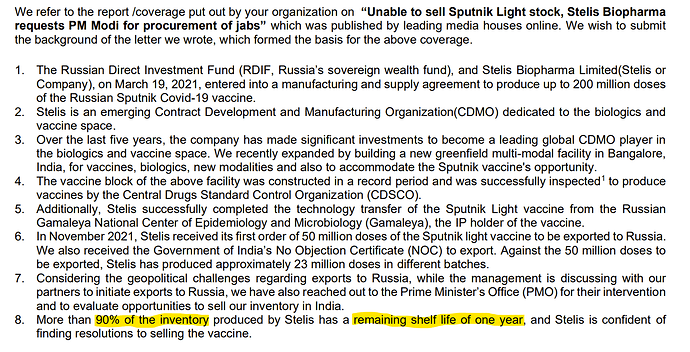 They have less than a year to sell 25 million doses of the vaccine. Articles written a few months ago suggested that demand for Sputnik Light is weak, as hospitals administer boosters based on doses patients had previously. This works against Sputnik.

To summarise what Arun Kumar has on his plate at the moment:

That’s a significant amount of effort for any person’s bandwith.

As an investment, Strides is at an all time low on book value (and on price to sales):

It’s likely book value will deteriorate by around Rs.20-25 per share after Q4 results come out, but valuations are at rock bottom. On earnings, FY22 posts an incredibly low bar for FY23, and one wonders whether the company will be valued anywhere near what it did in the past, with the landscape of US generics being different to 5-6 years ago, the numerous missteps of FY22, and the crown jewel in the thesis facing near term headwinds.

At the same time, would be nice to follow the ANDA filings to see if they genuinely move towards complex products (by the CACTVS metrics Sahil shared), and also see how Solara improves.