Sterling Tools : MCap : 1200 Cr
Promoter Holding : 65% (70% last year) : Reduction due to some preferential Share allotment to Meidoh Co. and around 2% Stake Sale in open market by one of the Promoter.
No equity Dilution except Last Year Preferential allotment
D/E Around 0.14 ( It was above 1 few years back)

Established in 1979, STL is engaged in the manufacturing and marketing of high tensile cold forged
fasteners for the automobile industry. STL has three manufacturing plants located at Faridabad, Ballabhgarh and Palwal in Haryana and is in the process of setting up its fourth manufacturing plant, in Karnataka at an investment of Rs. 90 crore. The company has a total installed capacity of close to 45,000 MT per annum and is one the largest fastener manufacturers in India (After Sundaram Fasteners), catering to leading automotive companies in India and Tier-1 auto-component manufacturers in Europe. STL’s product portfolio includes fasteners, which find application in both automotive and non-automotive segments. In FY2018, STL entered into a business collaboration with the Japan-based fastener manufacturer, Meidoh Co. Ltd, which would enhance its design and development capabilities in the automotive fastener segment. Majority of the fasteners manufactured by the company are developed based on designs provided by the customers

Disc : I have no holdings as of writing the post. I came across this company and found No thread on forum so have created this. Have few questions too which i have posted below. I am currently understanding the Fastener Market. This post has most of the information taken from ICRA Reports.
This is a 1200 Cr Company. Another company where i initiated a thread some days back is a 100 Cr Company. Biggest Company Sundaram Fastener is a 10000 Cr Company. There are some well known investors who have investment in this company but have reduced some stakes recently.

Key Questions i am trying to figure out are :

Did anyone attend the AGM today? Could you please kindly share notes.

Had a short conversation with Vaishali from Sterling tools (Company Secretary).
The slowdown in automobile sector is persistent with no revival seen yet.
Though the retails sales figures were positive in October 2019, retails forms a very small portion of their total sales and hence not much impact.

Did not mention the total market size of organized fasteners market but said that it is largely unorganized.

However, of the total organized market, Sundram has ~35% of total market share in terms of revenues while STL is at ~25-30%.
Assuming this to be accurate, total market size in revenue terms could be ~RS. 3200 cr.

The Bangalore facility was commissioned in July’19 & is operational albeit at lower utilization levels due to muted demand outlook & phase-wise ramp-up plans. Total capex including land cost was Rs. 95 cr. Things would come into perspective from next year onwards. Plant was mainly set-up to shift HMSI process.

There is a marginal decline in term loans. Sanctioned working capital loans are ~Rs. 70-80 cr of which hardly Rs. 10 cr is used.

Also, the company used to pay 35% tax earlier and have decided to shift to the new regime. This is expected to bring ~Rs. 6-7 cr savings p.a. for the company which a postive. Things will start to show up once OEM’s start giving orders, however it will take some time.

Discl: Have a tracking investment in the company.

Sterling Tools in JV with Chinese company to make components for EVs
https://in.finance.yahoo.com/news/sterling-tools-jv-chinese-company-components-evs-052456765.html

Hi @bharat19, @mehrawat1611 are still tracking this company …
if yes have you checked the Contingent liabilities and other commitments section

The EPCG scheme allows import of capital goods including spares for pre production, production and post production at zero duty subject to an export obligation of six times of duty saved on capital goods imported under the scheme, to be fulfilled in six years from authorisation issue date.
So within six years if the exports are met by the company this won’t be any issue

I am trying to gather some information about Sterling Tools – the AR and the publicly available sources didn’t have much information so thought of posing my questions on this thread:

(a) do we know which OEMs are buying from ST
STL’s FY 20 AR doesn’t mention anything but I guess their existing clientele will be among their initial set of customers, and STL does have a superb clientele.

(b) magnitude of sales and sales growth from this JV
FY 20 AR clearly calls out this JV as a “start-up” within the company – something they invested in to future-proof the company. In FY 20 the JV didn’t do much in terms of revenue because they are still in a start-up mode. 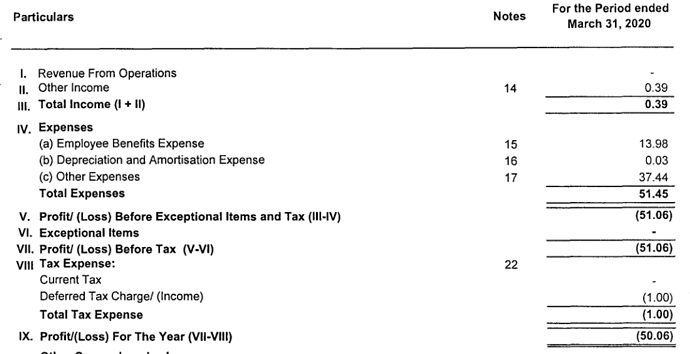 ( c) which are the other MCU manufacturers in India

A brief introduction to companies manufacturing EV powertrain components in India, their product portfolio and people at helm.

Out of ones above Sintercom is not really into developing MCUs for EVs – so that leaves just three players.

(d) market size for MCUs in India?
Not able to find any relevant info for this.

Sidebar: I looked up STL Gtake on LinkedIn and they have hired quite a few engineers with degree in Power Electronics and Automotive Engg. in the recent past (8 - 10 months). 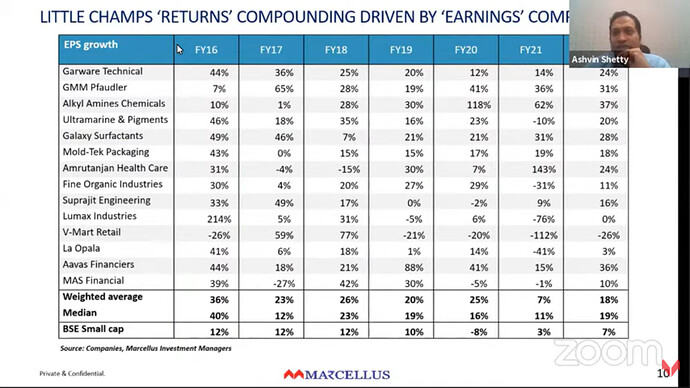 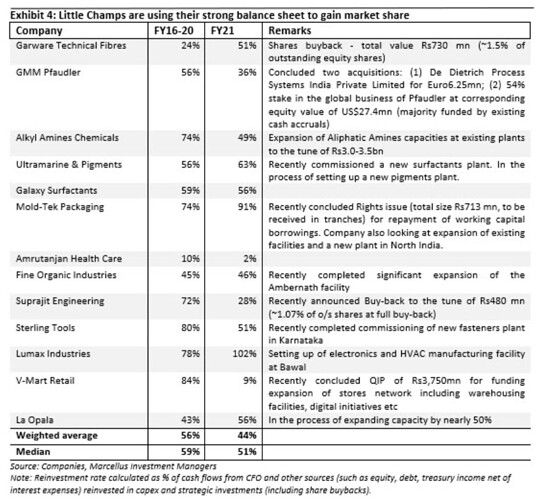 Irrespective of whether they hold or exit, the fact that they have bought this means that the company passed accounting filters. If the exit is due to a accounting filter, then that is cause for worry. Many times, they will shift to an opportunity that is more attractive.

Marcellus officially confirmed in their latest LCP newsletter that they have exited Sterling Tools due to deterioration in accounting quality.

As per the top 500 shareholder list of Sterling Tools, it is visible that marquee investor Mr Sanjoy Bhattacharya is holding large numbers of shares via his personal and family names- this is as of 31 May 2021. 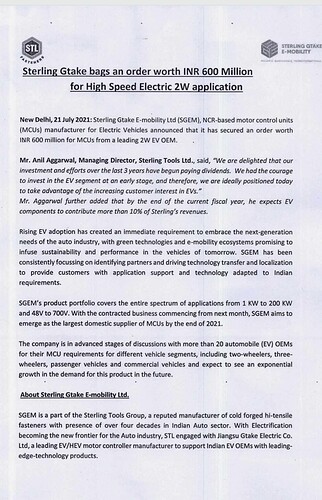 Get the latest stock/share market updates & corporate news/announcements and be updated on the live and latest happenings in the corporate world. BSE is the fastest & most reliable source to get accurate news about the companies in India.

Hi, Apurva the announcement looks really interesting, getting order from a single OEM for 60 cr is very good, especially looking at their peak revenue of 500 cr in 2018-19. Since they are saying that ev components should contribute more than 10 perecent of their revenue this year, means mostly some revenue from this order should also flow in fy 23.

Does anyone have any clue on
What could be selling price of an MCU .
What’s the capacity of sterling gtake plant and what can be asset/ turnover.
Also any update on fund infusion from Gtake, which is getting delayed due to covid and changed fdi guidelines. ( That should reduce some stress on their balance sheet).

Hi - has anyone been able to delve into the accounting quality remarks made by Marcellus. I don’t know things like auditor’s renumeration is publicly available anywhere. I know any company they pick ticks most of the boxes but worth checking on those points prior to any fresh investments.

@grovmo
The auditor remuneration is given in the annual report under the other expenses schedule. Even contingent liabilities are given in AR.
Even I am surprised because Sterling Tools has not released FY 21 AR yet, and auditor remuneration and contingent liabilities were not given in quarterly numbers.
However, the ‘other expenses’ rose around 50% QoQ in Q4 FY21 (here), when revenue was largely flat.
Other than that, I personally could not find any big red flag in numbers.

Thanks @Malhar_Manek - absolutely, Marcellus would have found out during a call with the management. I was just looking up an older report, and the other expenses are in the order of ~25-31 Cr, so no big aberration there by the looks of it.

@grovmo
Your point may be true, but I don’t recollect seeing a stock exchange intimation from Sterling Tools about a meeting with Marcellus

What could be selling price of an MCU .
What’s the capacity of sterling gtake plant and what can be asset/ turnover.
Also any update on fund infusion from Gtake, which is getting delayed due to covid and changed fdi guidelines. ( That should reduce some stress on their balance sheet).

Jayesh - I don’t have answers to these Qs. If I find something I will share it in this thread.