• Established in 1993, SDBL is a Bhopal based company engaged in manufacture of beer and IMFL.
• As of March 2017, it had total capacity of 59200 KL (kilo litres) of beer and 5400 KL of IMFL.
• Its product portfolio includes beer, whiskey, rum, brandy and vodka.
• 89% of topline is derived from beer. Company has three brands that sell more than 1 mn cases (~9000 KL) per annum – Hunter, Black Fort and Power Cool.

• Hunter and Woodpecker brans are supplied as draught beet to major hotels in Madhya Pradesh and Chhatisgarh.
• A number of key expansion measures are currently underway (look at section below)

• Per capita consumption of alcohol in India is one of the lowest in the world – due to social stigma, high government interference and high taxes
• Beer industry is mainly concentrated in Southern states of India with market share of these states at 50%, mostly due to hot climate throughout the year. Some seasonality in sales of beer.
• Industry is strongly skewed towards IMFL. Among beers, strong beers are preferred -

• Ban on direct advertisements and promotion imply that for a brand to become successful it has to invest in surrogate advertising such as glasses, mineral water, music items etc.

• Woodpecker beer (in Mar 2017) and other four IMFL brands (in Nov 2016) allowed supply to CSD in March 2017. Entered into bottling agreements with Jagajit Industries and Oakland Bottlers in Apr 2016 to cater to CSD and Northern market.
• Launched new flavours in RTD vodka White Fox.
• Invested 40 crores equity in subsidiary in Karnataka. Capacity expected to go online from end of March 2018.

• Signed MoU with White Owl Distilleries in August 2017 to brew and bottle their craft beers -
• Entered Maharashtra market in Nagpur in Feb 2018.
• Approved decision to raise capital of 150 crores in March 2018.

• As of annual report 2017, in the process of implementing ERP across manufacturing sites and depots.
• Beer brands have been approved by USFDA for supplying beer to USA and trial orders sent.

• Focus on CSD and increase CSD sales share from 5-6% to 15-20%. Increase from 16 to 36 outlets.
• Diversify geographically into growth markets such as Karnataka, Kerala, Andhra Pradesh and increase sales in legacy markets such as Delhi and MP-Chhatisgrah
• Decrease seasonality in revenue from beer by increasing sales of IMFL and RTD drinks. 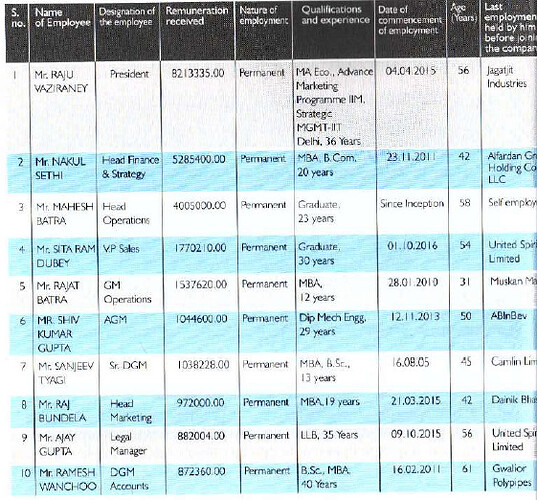 Sharing some photos of White Owl - a craft beer brewed and bottled by Som in agreement with White Owl Brewery Pvt. Ltd. You may read more about it on their website https://whiteowl.in/ 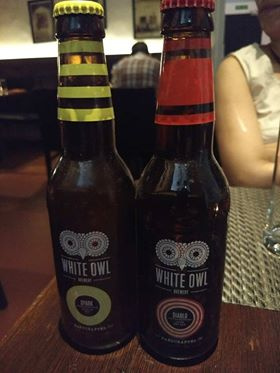 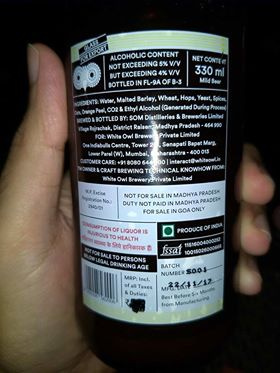 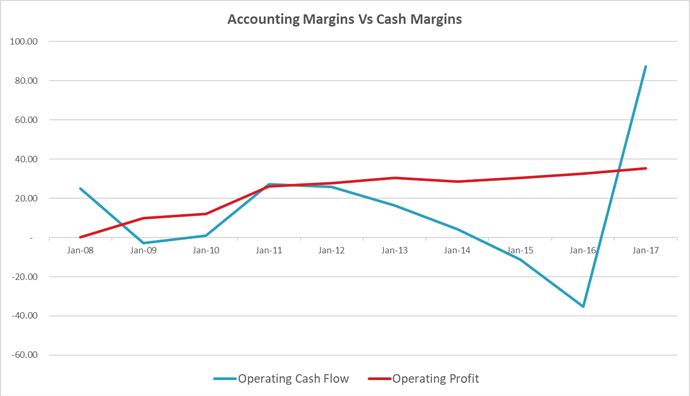 Any specific reason for this? Sorry, I didn’t actually go through their ARs. I noticed this right away from Screener data. Thank you.

Yes, as noted in point 4 in my post above, the working capital cycle of Som is suspicious. Annual report 2017 reads -

We have to see whether the working capital stabilizes going forward. Attaching some graphs here for why CFO declined between 2013 - 2017. 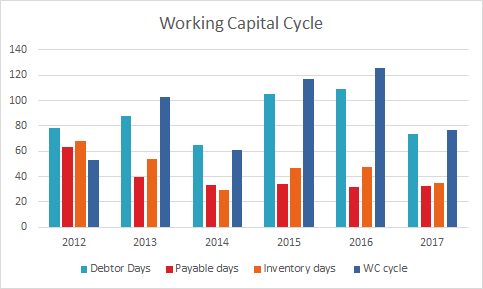 Another concern and something that affected CFO a lot was sudden increase of short term loans & advances mostly due to trade advance to related parties and advance to retailers.

I haven’t studied any other alcohol manufacturers, so if members can throw light on this matter, it would be helpful. Or we can compare SOM’s working capital to some other efficient player.

Need to keep in mind that Som went through some trouble between 2013-2017. As noted in post earlier, they were charged with design infringement by Carlsberg and SAB Miller. In one such case, I think they were asked to not sell their inventory. I will dig up the legal issues next and see if there are any pending matters that may hurt Som’s operations going forward.

Annual report in 2014, 2015 had talked about increasing beer capacity to 90000 KL, but this never happened. One has to investigate why this was the case and why the company has struggled for last 5 years to improve sales. All said and done, the list of developments in the last one year are very intriguing. Need to do more digging.

Isn’t the relatively low promoter shareholding a cause for discomfiture?
Also, over the past 5-6 years their sales have increased but margins have consistently worsened.
Shouldn’t a company’s margins be improving if its brand is doing well? They’re possibly adopting the strategy of sacrificing margins for sales?
Also, I’ve a question pertaining to the shareholders holding shares in excess of 1 percent.
Most shareholders in the list seem to be holding just 1 share- Som Distilleries. It’s baffling to me that all large shareholders hold shares of just one company. Or are they employees or business partners?

Long back, April 2010, I studied this stock and wrote a blog too. I had the same concern, the low promoters holding. It was 21 Rs at that time. Bought and got out at Rs 81. However, this went up all the way to Rs 300 in 2013.
The company does look strong but the PE is really high.

Disclaimer : Picked up a tracking position and views may be biased

@sukhlani1 Here are some of the risk factors I noticed

Auditors have some comments in FY17 annual report. 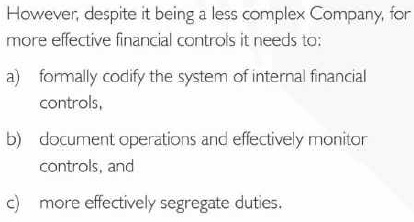 There is a new auditor for FY18 and there are no comments and qualifications for FY18 results.

Any idea about short term advances on the balance sheet?

There is a significant amount advanced to a related party

but there are no details in the notes 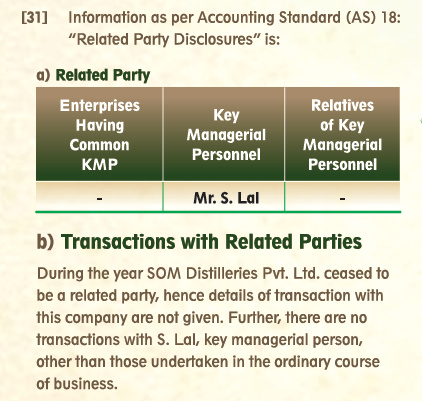 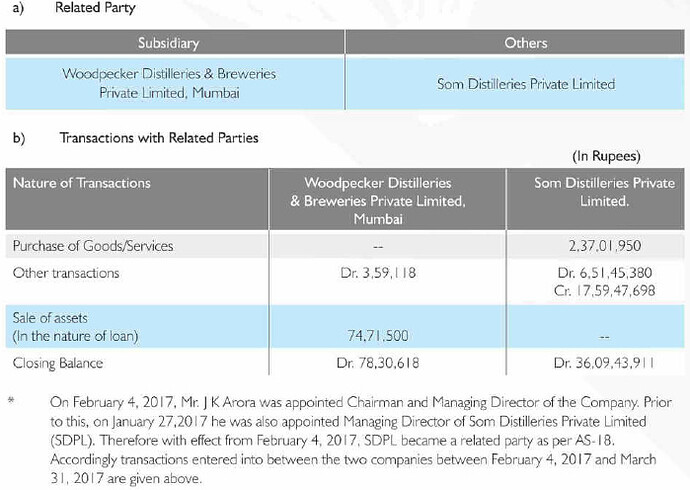 Short term advances continue to be a large part of balance sheet in FY18. 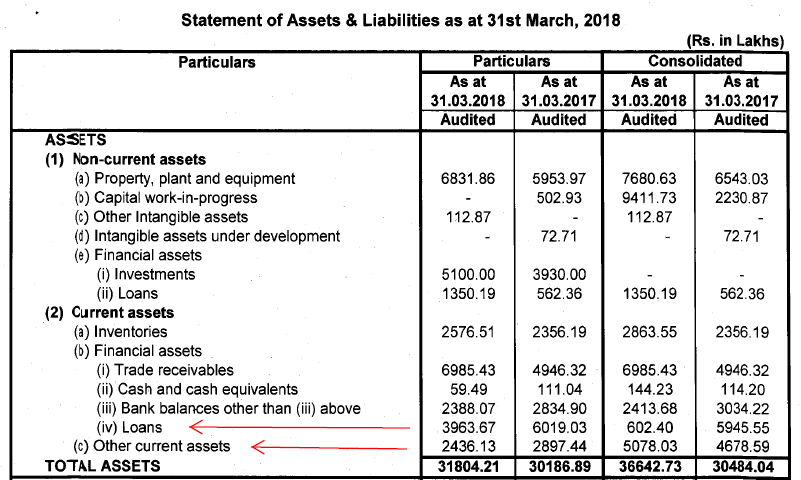 New unit in Karnataka was suppose to start in Q3. It was then rescheduled to Q4 but it is still not started.

There is an item in cashflow statement that states 39.3 Cr raised by issuing equity capital. 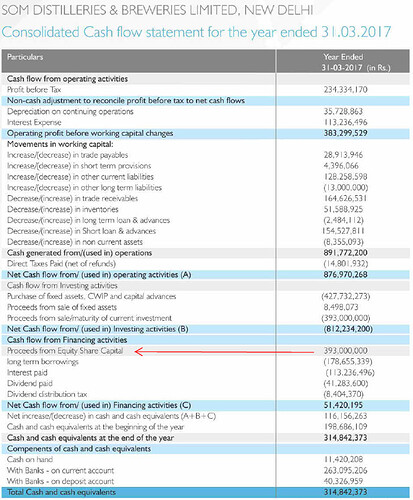 But there is no increase in share capital or reserves 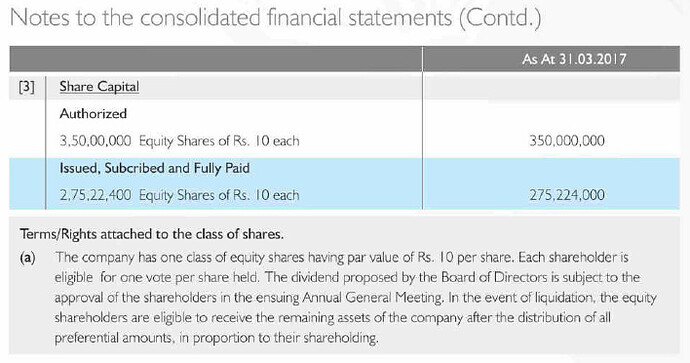 when compared to share capital and reserves for FY 2016 which is available in standalone results.

In standalone results, same amount is shown as investment in subsidiary

Thank you for scuttlebutt on this co. We have been reading & learning about this space. Will be great if someone can help us on this co further

Some queries from our side which we are trying to understand more:

Som Distilleries Pvt Ltd (JK Arora is MD of this company and holds 69.32% stake in this entity; also SDPL holds 11% stake in SD) – we hear that this private co has huge revenues compared to the listed entity?? Anyone has financial performance details of this unlisted entity? And any upcoming

I quickly checked for the financials of this company. They are behind a paywall but the paidup capital seems to be 27.46Cr and outstanding loans of ₹206.36 Cr. Here are some links for more information. 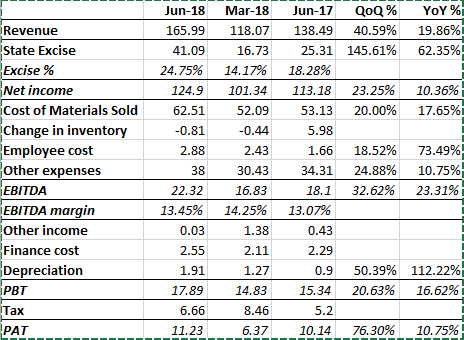 I was researching on legal cases against Som and found some interesting links. SABMiller, Carlsberg and recently United Breweries have all appealed on design infringement and passing off.

https://spicyip.com/2013/03/bombay-high-court-decision-on-trademark.html - Bombay High Court finds Som guilty for violation of trade mark - interim order of 18 Dec 2012 upheld
Summarised here - https://www.slideshare.net/samkitjain7/sabmiller-vs. Not sure what was implication for Som in the long run.

There is more to your liquor than you know | Selvam & Selvam

In a rather interesting case, Carlsberg Breweries had filed an application with the High Court of Delhi seeking an injunction against Som Distilleries and Breweries Limited, manufacturers of ‘Hunter’ beer, restraining it from using a design which...

United Breweries case is ongoing now, so need to follow that.

Need to figure out how much of this is actually hurtful to Som’s prospects in the future. Insight from some IP lawyer may be helpful here.

On a consolidated basis, Som continues to have a WC cycle of 72 days 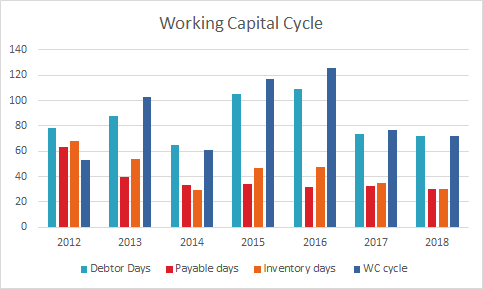 This item on the balance sheet has been abnormally high in the last couple of years. Good to see a sharp drop of ~ 57 crores.

Note: There was an error in similar chart posted earlier where I had mistakenly taken numbers for standalone entity for FY17

For classification between loans (under financial assets) and other current assets, there is discrepancy between numbers disclosed specifically under these two headers in the results declared for Q4FY18 and AR, although sum of the two items is the same (not attaching snapshots - but can verify independently on PM if required). Should this be matter of concern? But this does not reflect well on auditors and management.

There is a new auditor for FY18 and there are no comments and qualifications for FY18 results.

Yes, that’s true but in AR18 they have made similar comments (in Annexure A to Independent Auditor’s report) as done previously in AR17.

Good thing to see was introduction of ERP system -

Would have wished for them to highlight this in their commentary or made a corporate disclosure. Oh well, let’s at least hope this will lead to more effective financial control in the future

As noted earlier total investment made in Woodpecker (Karnataka subsidiary) is 129 crores. To break this up, I’ve compared standalone and consolidated statements

6. Related party transactions
These are corroborated with current loans in standalone BS

Need to figure the nature of transactions with Som_private. Waiting for it to upload documents for FY18 to MCA so as to figure it out. Also CEO is not paid, so does he draw huge salary from Som_private?

There is consolidated BS, P&L for FY17, but no consolidated CF statement for FY17 in AR18! Auditor has also changed so this is a red flag.

For reference, I used the consolidated cash flow statement of FY17 given in AR17 and found some interesting things. @Yogesh_s alluded to this when he showed that there is item called ‘proceeds from equity share capital’ under CFF but no corresponding item under equity capital in BS. But also note that there is also item called ‘proceeds from sale/maturity of current investment’ under CFI in the same statement, so net cash effect is zero.

So this is for the equity infusion of 39.3 crores done in FY17 into Woodpecker. This year they infused another 11.7 crores, but this time around in consolidared CF, no such entries made under CFF and CFI.

In standalone CF statement of course, it shows both 11.7 crores and 39.3 crores investment under CFI.

This might be a moot point because net cash effect in consolidated CF statement is zero, but will be better to get clarity on accounting rules. Unlike legal systems, I like to follow the exact opposite (even if I’m already invested) with respect to investment decisions and consider companies as guilty until proven innocent.

Another concern that I have noticed is the presence of ‘Preoperative Expenses’ under Current Assets in the Consolidated Accounts, amounting to INR ~6.95 Crores (up from the previous year figure of 0.90 Crores).

From my understanding, the company should ideally expend the preoperative expenses, which would essentially decrease the profits to the extent. However, the company has shown them as Current Assets, much like how it was done in earlier times for Misc./Advertisement expenses. However, I think this is no longer allowed under the new standards.

Anyone who is aware of this treatment or perhaps could highlight if I am missing something?