Been tracking this company called Shilchar Technologies which is into power and distribution transformers and concentrated on catering to renewable energy space.

This is a debt free company, and CFO has been positive since FY12. The company has been consistently paying dividends and the payout has increased from Rs 0.50 in FY 13 to Rs 1.50 in FY 15. Very strong return ratios, ROE/ROCE in excess of 25% as on Sep-15.

CMP is Rs. 277 and the stock is trading at a P/E of ~12x if I extrapolate the H1 EPS. Q4 generally is the best quarter for the company. Feel that this is a good long term bargain. Scalability might be the only concern right now.

Would love to hear everyone’s views on this, if any?

The fundamentals are no doubt good but the stock price has run up quite a bit already. Price to sales < 1, PEG Ratio of 0.5 and Price to Cash Flow < 5 are attractive. On the flip side though the company has good consistent profit growth of 34% over 5 years, the company has delivered a poor sales growth of just 6.5% over the past five years.

I am not invested in the stock.

Chinese and Koreans have captured almost 1/4 of indian transformer market, products offered by them are cheaper and technologically advanced.

What are your views on this?

http://www.prnewswire.com/news-releases/india-power-and-distribution-transformers-market-to-grow-at-over-10-concludes-techsci-research-study-289920661.html - “Two major Chinese companies, TBEA and Baoding Tianwei Baobian, have already set up their transformer manufacturing units in Gujarat, while other Chinese players are showing interest in entering India through joint ventures and collaborations. Indian companies, on the contrary, are more focused towards exports as they earn higher profit margins on transformer exports to countries like the US, South Africa, Cyprus and Iraq. To reduce their dependence on overseas laboratories for testing extra high voltage transformers, Indian players are also focusing on establishing their in-house testing facilities, mainly for UHV class transformers,” said Mr. Karan Chechi, Research Director with TechSci Research, a research based global management consulting firm.

I still think the market size is large enough for Shilchar on its small base, and also its focus on exports (now 50% of revenue) which will help maintain margins…

on competition, chinese and Korean players are supposed to be active in higher rating of 400kV plus as per this chart by Edelweiss 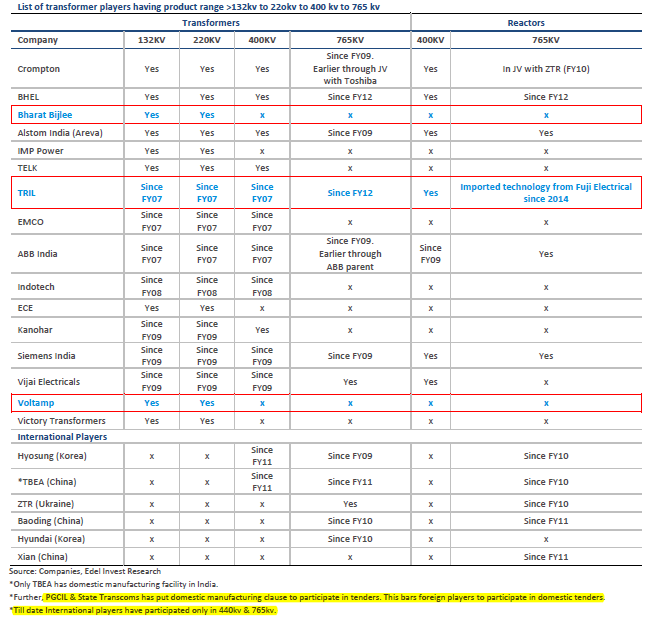 the report also mentions that PGCIL and State Transcoms only allow those companies to bid for tenders who have local manufacturing. this cluase also restricts the foreign competition to a large extent in this higher rating category.

couple of questions on Shilchar -

would appreciate any info here, thanks.

Shilchar seems to be a well run company. Good return ratios (ROE 24%). Has been retiring debt over the last 3 years and is now sitting on Rs 10 cr of cash.

Also expanding capacity (wip of Rs 5.6 cr as on March 2017) as running at 100% capacity. Has one of the highest margins in the industry (18% ebitda) and exports constitute 40% of sales. Largely supplying to the renewable energy sector which should see good growth.

With the sector turning around, any thoughts on Shilchar for the medium term?

Disclosure: I hold so my views are biased. 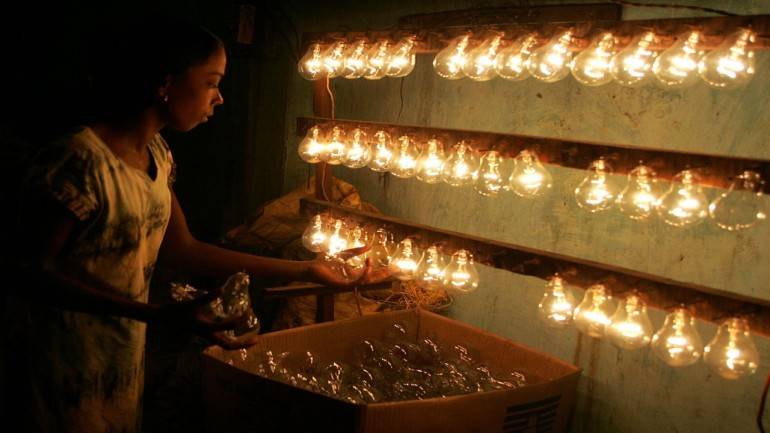 PM Modi's 'Saubhagya' scheme: Whose fortunes will it brighten?

Companies which will provide supporting infrastructure for the last-mile connectivity will benefit from the scheme to electrify all villages.

Shilchar should also be a beneficiary of this. Their expansion project should be commencing operations from January 2018 and is well timed. They are spending about Rs 35 crore on the expansion (large sized expansion for their current size; funded largely by internal accruals).

CARE has upgraded the credit rating of Shilchar to A-. The rating scan also mentions that it is expanding capacity by 3.5x.

“STL has undertaken an expansion project in order to increase its production capacity to 3.5 times (4000 MVA
annually) along with widening manufacturing capability range from 25 MVA/66 KV class to 40 MVA/132KV class”.

Interestingly, the 3.5x expansion is being undertaken without dilution of equity and should get completed by January 2018.

“STL has undertaken an expansion project in order to increase its production capacity to 3.5 times (4000 MVA
annually) along with widening manufacturing capability range from 25 MVA/66 KV class to 40 MVA/132KV class”.

Has company made any disclosure regarding the expansion plan?

Surprisingly, the company has not make any announcement of their expansion plans. However, the March ending 2017 balance sheet shows a work in progress of Rs 5.6 cr and liquid investment of Rs 11.5 cr (to be used to part fund the expansion plans).

At a market cap of Rs 164 cr and PE of 14x, it is very reasonably priced in this market (considering a 3.5x expansion plans and high ROCE/ROE of around 24%).

We need to find answers to the following question

As far as corporate governance is concerned, I will give company a very low score because non-disclosure of 3.5x expansion in capacity is clear violation of LODR regulation of SEBI.

Yes, you are right that they should have made an announcement to the stock exchange. The source of the 3.5x capacity expansion was mentioned in the CARE rating scan !!!

A positive in todays times of highly leveraged companies is that Shilchar is a zero net debt company (nil long term debt and Rs 4 cr short term debt compensated by Rs 11.5 cr of liquid investments as on March 2017).

Also it has been continuously increasing dividend each year since the last 4 years and has been dividend paying for over 10 years now.

The customers of the company are on the website.

Whatever short comings it has are probably already captured in the valuation (surprising low in today’s bull market).

The Company is investing heavily on new production facility located on Padra – Jambusar highway.
The new facility will be state-of-the-art with modern equipment and material handling system.

Company is investing approximately Rs.36 crores in this facility which will increase revenue by three folds once utilized 100%.

The commencement of production at new facility will start from beginning of financial year 2018-2019.

What gives confidence to small investors like us is that promoters (Jitendra Shah family) own 65.85 % of the company. This tends to be a very important data point in small cap companies where not too much information is available on the company.

Apart from that, there are some non-promoter investors who have been holding a large no of shares for many years now:

This appears a long haul share where one cannot expect quick returns as capacity utilization of new capex will take place gradually. But if they do achieve the 3x increase in turnover over the next few years, the share can move into another orbit.

The 3x expansion finally showing up in the financial results. Missed out noticing that Q3 PAT was up at Rs 3.54 cr compared to full year FY2018 PAT of Rs 5.84 cr.

Since the Rs 31.25 cr expansion was largely funded through internal accruals (only Rs 13 cr of debt), the financial costs are also under control.

Need a lot of patience with such stocks to fully reap the benefits of such large expansions.

What an amzing set of results declared by the co.

I think the sector they serve ( Renewables& Power ) itself now has tailwinds and they will grab with both hands due to timely capex .

Shilchar has produced best results of all time. Finally their 3.5x capex done few years back has started reaping benfits. Renewableand ferrite transformers are in huge demand as per compay. They export 50% . It has ROE and ROCE more than 20% and Price/Book Value -2.5 . Margins are also decent and management is upbeat about delivering in future. Looks like great story unfolding.