I had also come across this company sometime back as it was posting fantastic numbers and valuations looked attractive and I also have a tracking position. Some points which seem really concerning to me are:

and then for next 4 years, this amount is shown as share application money pending allotment. In 2016, this gets changed to Non-convertible Pref Shares.

So who lent such a huge money with no returns?

Its also strange to see that 50% of the gross block of the company is into leasehold land.

3 . The business seems highly capital intensive. Asset turns are low and it seems the company has additional capex plans of 500 Cr in coming years.

Overall, given the aggressive nature of things and fast pace of developments, there may be more things and reasons behind the above but it would be important to understand and have clarity.

But Stock Volume is the biggest concern. What is the use of very attractive stock if you can not buy it???

The company has had awesome growth till 2015 and inability to manage this growth had landed them in troubles it seems.

Since I don’t have access to computer, I can only guess that the market has priced in the dilution.

If management integrity is there, then this could turn into another Vinati.

It looks that promoters have invested their own money in the company.

Pretty strange but interesting transaction. Can we try digging more about the promoters, how are they do cash rich? What are the other businesses they might own?

After long time I had time to check up on the company. Some notes:
From Screener
Debt /equity ratio : 2.93
Interest coverage ration : 3.95

So this is a debt fueled vehicle it seems. With the inventory turnover of 9.68 there wouldn’t be much requirement of debt (at least not for working capital), it seems that the promoters are more into Real Estate rather than in speciality chemicals. Quite a gamble I’d say.

The stock was also covered in ET today, it seems the company is undergoing both backward and forward integration and is looking to treble sales by 2020. It’s trading volume is too thin which is a little discomforting.

Key is to understand how promoters have funded expansion.

Yes looks like taking on debt to fund its expansion…

It is important to look at the competitors in this space. Among the listed entities, Aarti industries is the largest player in the benzene derivatives space with it’s corresponding product capacities being 5 - 10 times that of Seya. There is also Kutch Chemicals (Panoli) and Hemani Industries which manufacture similar products at capacities that are higher than Seya.

I highly doubt that Seya can be a cost competitive producer and there seems to be something amiss in their reported numbers as highlighted by others already - the low employee costs, questionable treatment of capital etc.)

On the other hand, if Reliance MF has started accumulating this stock then there is a need for some on ground research before fresh comments can be made.

Business world has listed this company has one of the fastet growing companies in 2017. Anybody has detailed expansion timeline for the company?

I guess the reason for raising money though preference shares was that their D/E ratio was going out of limits. The share price being just 80-85 during that time , the promoters did not want to raise money through common equity and dilute their stake greatly. Company’s earnings trajectory, range of products offered and the chemical reaction capabilities highlight the increasing non-commoditised nature of the business.

Does anyone have a break up of their capacity expansion product-wise with timelines?

at least not for working capital

I am not sure what is going on here. What is aiding such abnormal industry beating margins, such low employee costs, almost negligible manufacturing costs, gross block containing leasehold land, high inventory turns meaning highly efficient or discount model. They are paying negligible taxes.

There annual reports are like marketing presentations. If you look at mgmt discussion and analysis, full of extreme marketing jargon, self praises, SWOT analyses, and things like that.

When 99.34% revenue is from one division (specialty chem), why does the company go on explaining 4 other division under revenue head. Why not just put “others”.

Now, read the below para. They are patting their backs for boosting reserves on back of security premium.

Now, look at their performance in terms of diluted EPS 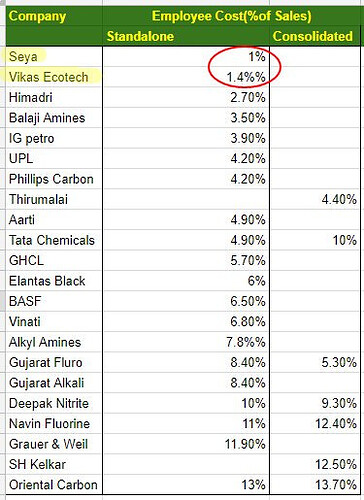