I am initiating a thread on SBI Cards. The company has filed a DRHP with SEBI and is expected to come out with its IPO. This is an attempt to simplify the DRHP to better understand the details of the business. Since SBI Cards is a pure play on credit cards business the DRHP has interesting insights on unsecured lending business in India and growth going forward. I have tried to put some of this forward through this note.

SBI Cards was launched in October 1998 by the State Bank of India & GE Capital. It is incorporated as SBI Cards and Payment Services Limited when it turned from a Private Limited Company to a Public Limited Company in August 2019.

In December 2017, State Bank of India and the Carlyle Group acquired GE Capital’s stake in the company.

The company has an outsourced workforce of 33,086 sales personnel deployed out of 133 cities engaging with customers across multiple channels. In addition to this the company uses SBI’s network of 22,007 branches to market its cards to its customer base of 436.4 million. 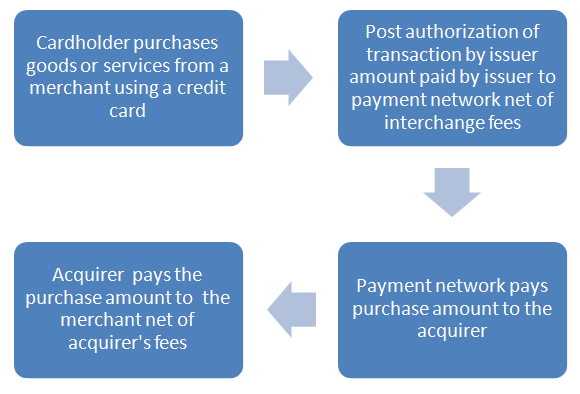 The credit card receivable portfolio is viewed under three categories :

Non-interest income is earned primarily through fee income which includes

Instance based fee: Primarily a function of number of cardholders outstanding and charged via late fees, over limit fees, etc

In the illustration below we can see how the company has grown over the last three years in terms of number of cards outstanding and the market share. As we can see the role of SBI in the sourcing of new cards have been increasing over the years

The total credit card spends is a function of number of cards outstanding as well as spends per card. As we can see in the illustration below the average spends per card has remained stagnant at a similar level while the increase in total spends have been entirely driven by increase in number of cards outstanding. Of the total spends online transactions continue to be less than 40% currently

As we can see in the illustration below the proportion of salaried cardholders has been declining sequentially over the last three years. This explains that a major proportion of the new accounts of credit card holders are being sourced from self employed people. Though this might seem a riskier strategy firsthand card companies also ask for a fixed deposit in its parent bank against which a credit limit is provided to the cardholders. Since SBI Cards is a NBFC this must not be a case with the company.

Co branding in credit cards is a meaningful share of total business for any credit card issuer. Let’s understand how a typical co branding agreement works.

The company is coming out with an IPO comprising:

Under the bank distribution agreement, the company provides branch relationship executives at select branches of SBI. Also, SBI has agreed to provide referrals of customer via business analytics for a commission to be paid to SBI

The business faces two risks in its operations which can derail the operations significantly:

Since the company is into unsecured lending there is no recourse in case of customer non payment. Though the company uses data from agencies like CIBIL which maintain credit history to analyse repayment capacity of borrowers in case of a system wide repayment issues the company doesn’t has any asset for recourse.

Interchange fees, which in India are set by payment networks like Mastercard & Visa if are subject to a regulatory cap by the RBI could in future reduce the income that credit card companies could earn through this fee.

The company charges interest rates on revolving loans and EMI payments. In case of any regulatory cap on these interest rates the interest income that it earns can be significantly affected

Unsecured credit card receivables present a greater credit risk than a portfolio of secured credit card receivables as they are not supported by realizable collateral. Thus there always remains a risk of delinquency of the portfolio in case of non payment by customers. However data over the last three years have presented a stable picture of delinquency levels in the unsecured loan market. 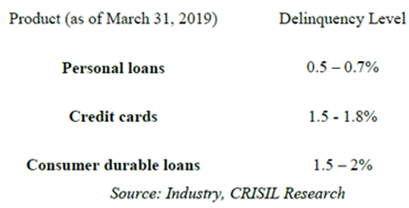 There are a total of 74 players offering credit cards in India but the top four players including HDFC Bank, SBI Cards, ICICI Bank and Axis Bank have a total market share of 72% in terms of number of outstanding cards and 66% by credit card spends as on March 2019.

SBI Cards and BOB Cards are the only two companies that are NBFC’s while all other credit card issuers are banks.

A strong payments infrastructure is one of the most vital points to building an ecommerce ecosystem. There are many companies competing to become the most widely accepted payment solution across the ecommerce basket. Competition is coming from the following sources:

How credit cards stack up against other payment systems

As we can see the one differentiating factor which makes credit card unique against all other payment systems is the credit free period which is not provided by any other payment solution as of now. While UPI has emerged as an alternative to wallets and debit cards due to the credit free period offered and other value added services around a credit card payment system the offering still remains unique.

How technology is helping companies

In FY 2019, 45% of the credit card applications were decisioned by credit decision engines without the involvement of any human intervention. In future measures like these could lead to a big advantage for credit card issuers in terms of saving on personnel costs.

The credit card spends have grown at a rate of over 32% over the last five years. The overall market has tripled from Rs 2 trillion to Rs 6 trillion over last four years. This market is expected to grow at a much slower rate of 20% over next five years reaching to a market size of Rs 15.2 trillion.

As we can see the penetration level of credit cards when compared to other economies both developed and developing is very less.

While personal loans form a majority part of the unsecured loan book outstanding, credit cards outstanding is expected to grow at 23% CAGR over the next five years driven by increased issuance in smaller cities, increased organised retail penetration and growth in payments infrastructure. 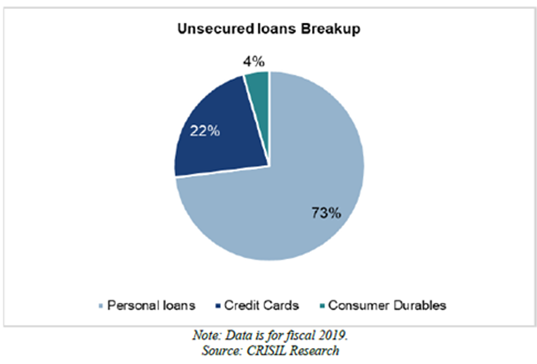 According to a NITI Aayog report(2017), per capita digital transactions are amongst the lowest when compared to peer and developed nations

Another interesting thing to look at is the size of ecommerce industry in India and the growth going forward. Digital payments are a direct beneficiary of rising ecommerce transactions. Increasing internet penetration, online shopping and lucrative deals have led to ecommerce industry growing at a CAGR of 32% since FY14 to reach Rs 2.9 trillion in 2019. This is expected to Rs 9 trillion in 2024, growing at a CAGR of 25%. 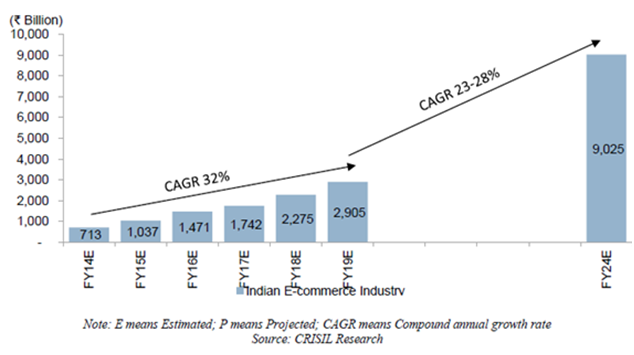 Leveraging the branch network of SBI

The company intends to deepen its partnership with its promoter SBI as the customer base of 436.4 million presents a vast pool of untapped customers. On these lines in October 2017 the company had launched an initiative “Project Shikhar” to market its products directly to SBI customers as a result of which proportion of new accounts sourced from SBI’s existing customer base has increased from 35% in 2017 to 55% in 2019

Operating metrics of the peers 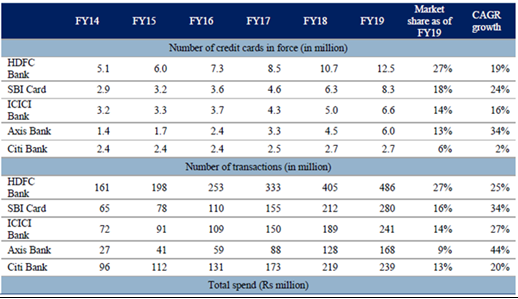 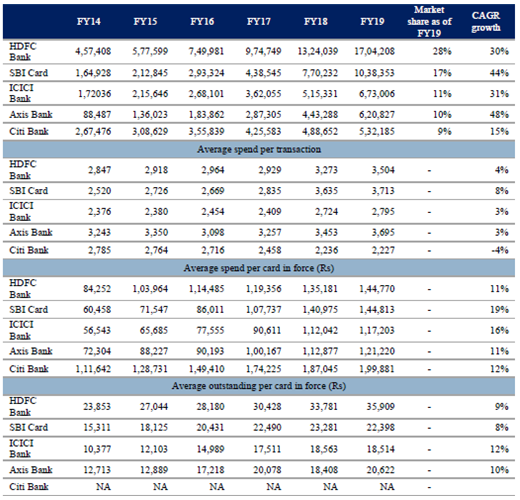 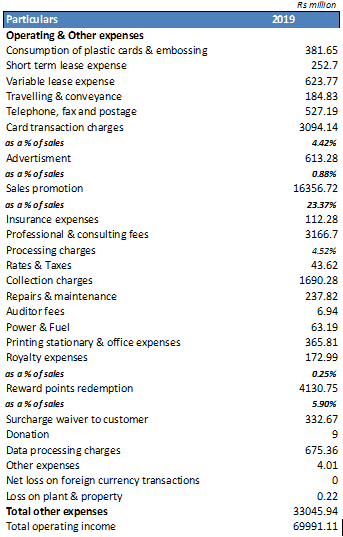 Disclosures: The company shares are not listed and the company has filed DRHP with SEBI for IPO. I do not hold any shares currently.

Sir where to find drhp on sebi site
Can you provide the link???

What a superb jump in revenues considering the present environment. Can you post what was the revenues for quarter ended 30.09.2019

Any reason you can think of as to why is an existing investor exiting completely? Do they see growth rate moderating?

These are some questions which I am looking answers for. Thanks!

Existing investor is not exiting completely. Carlyle is offloading 38% of their stake i.e 9.33 crore shares out of total 24 crore shares they hold and promoter SBI is offloading 5%. The Carlyle Group is a private equity firm and usually these firms have a 7-10 year holding duration. They are exiting partial stake in 2 years and I feel they will exit rest in a few years. That is how these firms function. Also they will be making a decent return on their investment considering their acquisition price is Rs 90/share.

The movement in average cost of funds is as shown below. Over the last three years they have seen an increase of 70 bps in their average borrowing costs. Also the major change has come in 2018-2019 which has been the year where NBFC’s in particular have seen cost of borrowings rise barring a select few.

Their total borrowings are a mix of NCD’s, working capital loans from banks and commercial paper. The average cost of borrowings is also a function of the loan mix the company carries on its balance sheet. The interest rates for the various instruments is mentioned in the DRHP as shown below 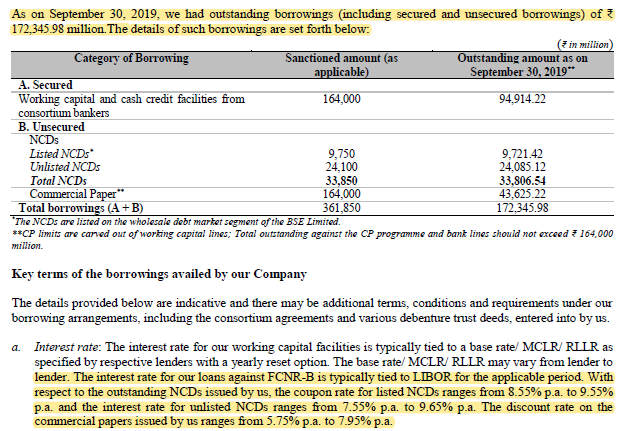 An old article on quality of lending by SBI cards.Only when tide goes out u know who is swimming naked.
https://www.livemint.com/Companies/X24FXkvlzmBheaEVBfWUnM/SBI-Cards-runs-up-huge-losses-NPAs.html

That is true with any unsecured sending. Bajaj finance and other nbfcs none are spared

This is a v old report.Thst was the time when people used the card and changed residence and did not pay. With credit rating etc, even micro finance loan customers are aware that with lower credit rating ,they would’ve problems.

Can any one well versed with accounting go through the Q3 report and quality ts of performance. I find the trade receivables and impairments HV increased substantially

I am a long term investor and I am tracking this IPO for some time .

In my view , it”s a steal if you can get more lots in IPO.

The total off loading is about 1.3 crores share.Sbi is offloading 4% while the other partner off loading 10%. The total issue size as per the expected price of RS 775/- would be more than 10000 cr.

What is the best way for an investor to get SBI cards shares allotted? I don’t own SBI shares

Will there be a preferential quota for shareholders of SBI?

Where can i get the RHP? Not available on SEBI’s website as of now.