Yes, Vikram was there in a conference and he confirmed that the deal is signed. In between, company was working on pricing negotiation.

This indeed shows the moat of the company that a big company like meta renegotiating the deal with company .

Anyone who knows how deals work in the music industry, as per an info dilgit Dosanjh and badshah were signed to universal/warner…

but then yesterday saregama punjabi launched a diligit punjabi music. 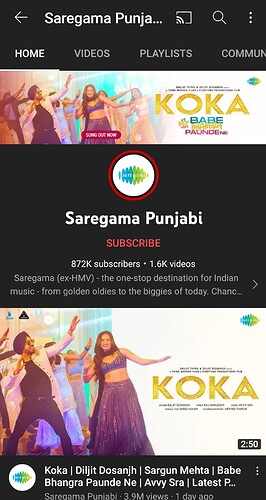 Nothing is exclusive as songs can be done with other labels atleast in India.

This shows the importance of the Events vertical of Saregama, given they have just concluded the tour and now a song with Diljit

While not related to Saregama, but recently T series remade famous Falguni Pathak song ‘Maine Payal Hai Chhankai’ with Neha Kakkar. The former singer said she can’t do anything as she doesn’t have rights. This is why music artists can be skeptical of music labels when today releasing a song isn’t that big a barrier as in 90s.

Founded in 2020 by the Indian entrepreneur Tarsame Mittal, TM Ventures represents a roster across music, comedy, TV and film that includes some of the countrys biggest talents, including Arijit Singh, Nucleya, Badshah, Sunidhi Chauhan, Asees Kaur,...

Saregama deal renewed with Meta, I hope on better terms for Saregama

Article is clearly hinting that Saregama had a good bargaining Position in the deal. Suble things but shows the value of their music Portfolio!

At first glance, not related to Saregama, however I estimate, Jio laptop will increase media consumption. Average user spend 3 to 4 hours/day on social media, with school children have this new weapon with them. Reducing entry barrier to get smart phone/laptop with lower price and cheaper data is boom for media companies.