Let’s look at some of their past nos 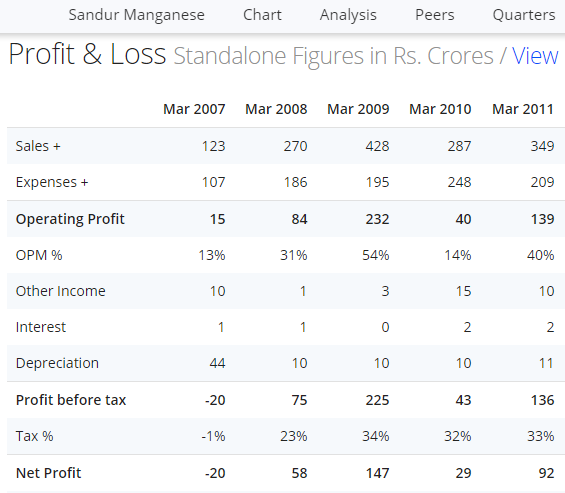 Then the mining crisis happened

One of the few honest company in mining

SC allowed category A mines to operate with a cap on production. This cap is being relaxed gradually. 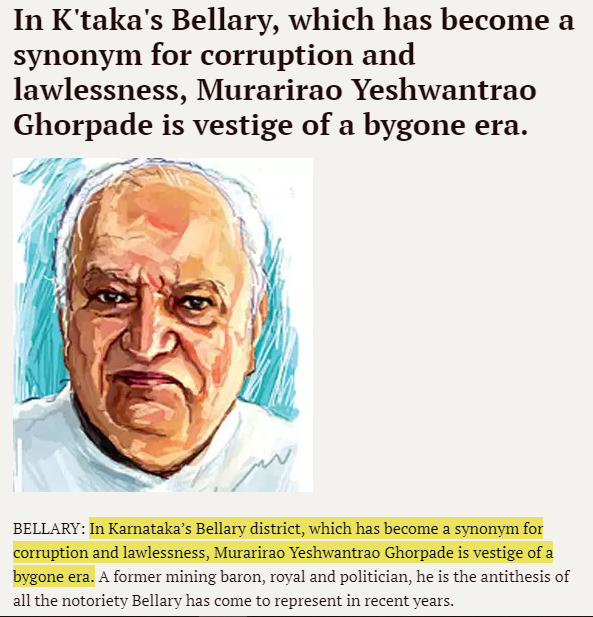 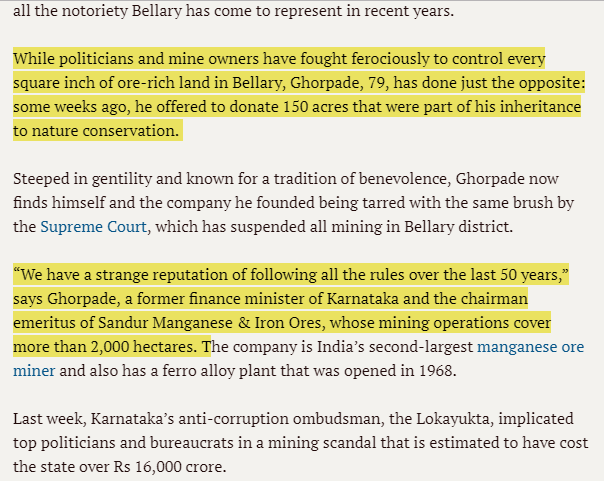 Why it could be interesting now? 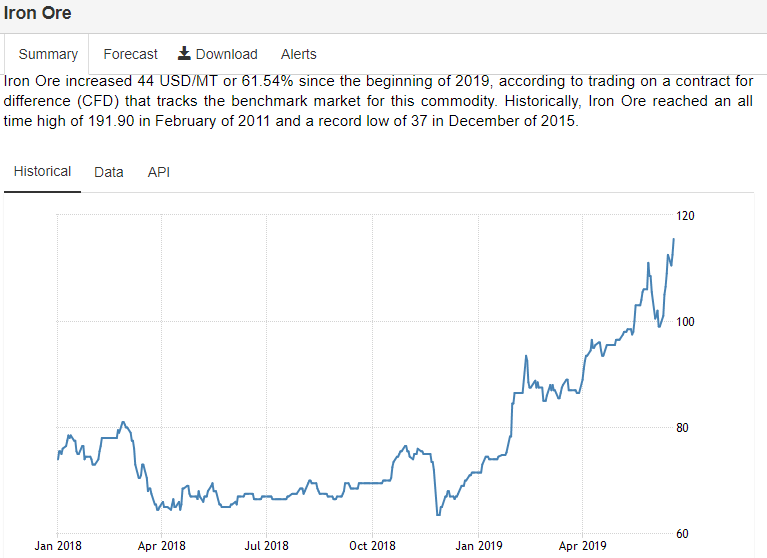 Disclosure:
I am a SEBI registered RA and founder of www.intelsense.in. I have no current investments in this stock, neither have I recommended it to my members. However, I may do so in the future. Please do your own due diligence before deciding to invest. This post is for educational purposes only.

@basumallick I came across this company when I visited Hampi and stayed at Sandur at the Maharajah’s palace (converted into ITC Welcome Heritage hotel - Shivavilas Palace). The history of the family/promoter is impressive and as per my research from public news and ground check with few people they seem to have been running the mining operation sustainably and within legal boundaries (which is rare in most Karnataka mining operations)

But I felt that the company and promoter have social bent of mind and too focused on social welfare. Given that they were ex maharaja and also elected politician, this makes sense on their part. I don’t have any hard data point to prove it.

Holding shares since market price of 350 but sad to know 1 st quarter 2019 promoters pledged @ 55 % of shares,can u throw some light why

Sandur Manganese has taken up a capex plan and needs approx 650 Cr for its Phase-1. Out of which 400-450 Cr is to be funded by debt and remaining equity.
Company towards the end of Q4FY19 has started implementing the plan and to secure the 470 Cr debt from Axis, ICICI & Indusind bank a promoter company called Skand Pvt Ltd has pledged 35 Lac shares with Axis Trustee Service Ltd (acting on behalf of lenders).
The reason we don’t see debt on the books as yet is that the transaction happened near the FY closing. We should expect to see debt in half year b/s (Company has so far drawn 150 Cr debt in Q1FY20).

Notes from AR19:
* Income increased 16% to 720 Cr. NP of 142 Cr vs 107 Cr.
* Max permissible production of both iron ore 16 lac tonne and manganese ore at 2.85 lac tonne done during the year.
* To pursue 1 mln tonne steel plant, it is important to pursue enhancement of iron ore production from 1.6 MTPY to 3.85 MTPY. This is all more important as nearly 40 mining leases are expiring in Karnataka in 2020. It is a gloomy prospect as far as supply disruption of iron ore goes.
In this context, SMIORE had applied way back in 2009 for production enhancement but processing the application was suspended due to SC’s ban on mining on July 2011. The co recently followed up the application, updating all clearances at the behest of MoEFCC. Hopefully the approval for enhancement to 3.85 MTPY will be obtained soon.
* 1 MT steel project took off with the construction work of 400 ktpy vertical coke oven batteries in July 2018. After crucial preheating of the ovens, 50% of the coke output is expected in November from two sets of batteries and remaining two by Feb 2020 to begin full scale commercial production. Once this is commissioned, the power generated by the hot gases from the coke ovens will be fully utilized in the ferro alloy plant, which is undergoing, installation of furnace, repair and refurbishment of two existing furnaces. Cost of gas fired power is substantially cheaper than the current coal fired thermal power. Consequently, the production of ferro alloys will become more viable and will have a competitive edge.
* The 400 kt metallurgical coke produced per annum would be sold to neighbouring steel plants and foundries. The installed capacity would constitute 50% of the local demand other than that of JSW. Once the power plant and ferro alloy plant are stabilized, we could confidently proceed with the installation of blast furnace for pig iron smelting in Stage II of phase 1. This would require half of the coke produced and promote value addition of iron ore by way of 70% sinterfeed.
* The co is targeting commercial production from Coke Oven plant by March 2020. Installation of new 24 MVA furnace is expected by December 2019 and refurbishment of 20 MVA and 15 MVA furnaces by March 2020 and June 2020 respectively. On account of the unexpected delay in clearance for forest land required for setting up Downhill conveyor system (DCS) and construction of mines roads, these two are expected to be completed by June 2020.
* The co has successively received “Five star” rating for all the three years and is the only mining company in Karnataka to have done so. The co has qualified for “Five Star” rating for 17-18 & 18-19 based on the template.
* Production in Karnataka was 29.5 mln vs limit of 35 mln. Production came down due to stoppage of Donimalai mine. Though the mine was renewed but the government asked for 80% premium. Buyers in Karnataka could import iron ore but miners couldn’t export the same. Monitoring committee has recommended exports to the extent imports take place.
* Grade of Mn Ore lumps sold by the company improved by 1 unit of Mn, and consequently realisation on sale of Mn Ore rose by nearly 2000 per tonne. Improvement in realisation was both due to quality and market condition. Grade of MN Ore production by the company is expected to improve further.

Overall, personally I feel the stock is trading at very attractive valuations due to robust earning and cash flow. Also, there is optionality of material increase in earning once they get approval to expand mining operations. Also, the capex being done should result in earning expansion. Negative - if iron ore prices fall a lot (given the weak sentiments in steel industry), negative operating leverage will hit the earnings.

Disc: Invested. Views would be biased

Read from the one-on-one with your company that post completion of Phase 1 , EBITDA is expected to be 220-250cr ? its not very high from the current 215 cr earned. Is that good risk reward after taking such a huge capex ?

It was my personal feeling that management is conservative while giving out future projections. Perhaps key reason for the same would be that iron ore prices are un-predictable…a 20% fall in prices would impact the current earning by much more as lots of costs are fixed in nature…and so it would be on the positive too.

There is an insider report that Supreme Court panel cleared Sarda mines (Odisha) of illegal mining. JSPL had paid some 1800cr (11-12 million tonnes of finished inventory) few years back for their iron ore.

Sandur Manganese AR cites steel industry in Karnataka importing as well as procuring iron ore from Odisha as a risk leading to decline in domestic production. If the report is true, wouldn’t this lead to fall in demand for iron ore and be bad for SM?

Also, the spike in global iron ore price due to Vale dam rupture in Brazil has almost normalized (price was $75/MT on 25th Jan 2019 before the rupture occurred and CMP $81).

Manganese ore prices are also falling, which can be arrested once Chinese importers finish utilizing their existing stockpiles. Oversupply from Eramet is another overhang (4.3 to 5MT to 7MT from 2018 to 2020 to 2023).

For Sandur, a lot depends on the approval of additional capacity by the govt since they are operating at almost 100% capacity utilization. Capex coming online next year would be a booster but in the short term share price have room to fall further.

Yes, the prices of the end product - Iron Ore and Manganese Ore have been falling. Both might have corrected by almost 15-20% till now vs a year back or prices 6 months back. On the positive, co was paying full taxes till now and there should be some saving on that. Stock has already corrected by 50% from highs. Overall, the co may still be able to do approx 100 Cr NP or so? If yes, then Market cap is hardly 550 Cr for a company undertaking a massive capex of 500-600 Cr with almost 200 Cr+ from internal accrual. It also seems that the current capex might give them high IRRs. Add to this there is a big optionality of material increase in mining if they get the EC approval.

But I agree with your assessment that near term maybe negative. And many often in commodities its tough to figure out how low the prices can be.

Regards,
Ayush
Disc: These are my personal thoughts and maybe biased. Me and my clients would be invested. And we may change our view, if needed.

Hi @aswin - I also know only as much as others

Overall, i think if you look at above comments…everyone would be expecting softer earnings given the fall in iron ore and manganese ore prices. Infact the margins can fall further in coming quarter as prices had corrected during August or September for the industry. But still, the nos look good from the mining segment given the fall in stock price and valuation

Ferro alloy loss is a surprise. Possible reason could be - shutdown or something for the expansion/revamp they would be doing.

Tax rates are pretty high - logically they should come down. infact there could be some reversal in coming quarters or end of year.

Trade receivable is really low given the size of operation and is a positive - business throws out cash. Payable would be higher due to capex

Transcript of brief interview with Bloomberg

Does anyone know why they are not able to scale up mining of Manganese ore when they have environment clearance of 6 lakh tonne?

Sandur came out with an announcement yesterday- https://www.bseindia.com/xml-data/corpfiling/AttachLive/cf5c3ee4-f060-4d31-8535-f0453ca679fd.pdf

Sharing the important points from this announcement.

If these triggers play out and the company is able to achieve revenues above 1300-1400cr while generating healthy OCF to meet their interest payments and capex plans then this company is available at a deep discount. However, a lot will also depend on the price movement of Iron Ore and Manganese Ore.

Disc: Invested and views may be biased.

@ayushmit I have Read about Replacement cost to Set Up 1 MTPA Plant is around 6000Crores on Value Pickr Forum, Sandur Manganese is talking about 800Crores for its Capex of 1MTPA. Can you please throw light of this.

That’s their long term plan…something to be done over next 5 years perhaps. As of now, they have undertaken phase 1 of expansion of about 600 Cr capex and then they will take up phase 2. Total of these is about 1500 Cr

Ferro Alloy Losses is not a big surprise, Trade Volumes across the industry for 6 months After April 2019 fell. I am into Trading Ferro Alloys. Everything was stuck i have seen that during that 6 months time. No Liquidity, No Demand, No Orders.

Suyogdhavan
Since you deal with ferro alloys, can you throw some light on its production capacity in India, demand and outlook for next one year and it’s import/export status .I am stuck with a company manufacturing ferro alloys which hardly moved in the last one year

Ferro Alloy Producers in India Hardly Make Money unless some company has a competitive advantage like Maithan alloys, Lowest cost Manufacturer,Cash Rich,Debt Free. Volumes of Ferro Alloys depends upon the fortunes of steel sector, there is lot of volatility in prices. So only way to make money is being lowest cost Manufacturer.
Like for Eg :- Production cost for Ferro Silicon in South India in bellary belt is 87Rs and Prices for Ferro Silicon last year were trading at 65-70 RS most of the plants having high production cost were shut during that time. Ferro Silicon producers from Bhutan had a production cost as low as 65 RS , they were running all the time and no shutdowns even in bad markets.
India has overcapacity of Ferro Alloys, Estimated Installed Capacity is 5MTPA, however all Ferro Alloy plants are not running during bad times,as they will be shutting down because of economic non viability, I think such plants would be 25% of the total installed capacity(Rough estimate). So it’s all business specific. You can check the production cost of FerroAlloys that they produce,if they are inefficient then making money in this industry can be a big nightmare.