I wish to get group’s opinion on my thesis of investing in RattanIndia Infrastructure Limited (REL) and RattanIndia Power ventures (RPVL).

REL has seen a big turnaround in 2022.It has sales turn over of 14 crores, but PAT of 554 crores, due to selling of it’s stake in Raatan India Power Venture.

Currently it’s quoting at 12 P/E ratio with ROCE of 118 % and ROE of 141 %. I see company is clearly a case of Turn-around with multiple tailwinds going forward. The promotors Rajiv Rattan is a IITD graduate and he co-founded Indiabulls group along with Sameer Gaulot. They separated from Indiabulls group and Infrastructure, and Power business came to Rajiv rattan. Now he and his wife Anjali rattan are in the driving seat of this group.

It’s business is divided in 4 verticals :

BANKse -Fintech arm for business loads and other loans

NEOSKY -Entering into Drone manufacturing with global JVs and using(Drone as a service-business model to deliver goods and services rapidly.

Revolt -Electric Motorcycle by acquiring this brand from other company.

All these business are run by capable CEOs in their respective domain and backed by eminent advisory board consisting of Arun Duggal (chairman of ICRA) and others.

Can this be good investment bet for coming 2-3 years?

I look forward to your views.

Thanks for writing. Looks like some-points worth highlighting from presentation:

Minority Shareholder in Revolt and numbers not included in Financials.

Cocoblu business has done 389 Cr in 2 Months (Apr & May) ! Cocoblu retail has taken over the business of Amazon’s largest selling arm Cloudtail. This business could be huge if played right. Need to see the margins though.

Lending and Drone business are new business and I think it’ll take time to see how they are going to perform. 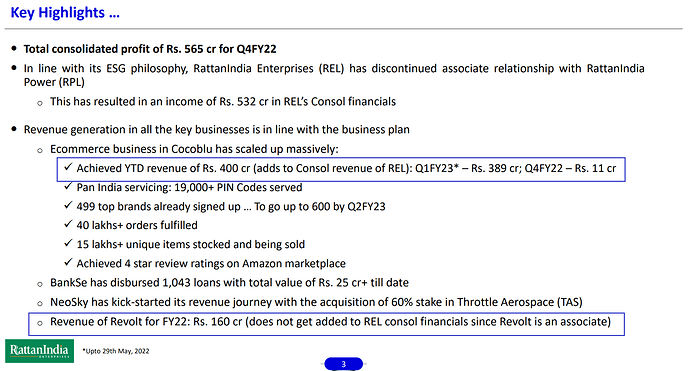 Building on my last post in June 2022, Company appears to be on right path with Cocoblu division generating 689 crore of sales in Q1FY23!!
As per HDFC securities report, Indian retail is likely to grow till 93.8 lac crore (93.8 Trillion INR) from FY21 to FY26 with CAGR of 8-9%.
Out of the total retail E-retail is only 5 % now at 2.43 lac crore and is likely to grow till 9.75 lac crore (10 % of total retail market) with CAGR of 28 %.
Company is rated as 4 star on Amazon platform.
Neosky has big opportunity ahead with selection under PLI scheme for commercial drone application.
Investor presentation Q1FY23 attach for reference.
Happy to hear valuable views from other members!!
Disclosures: Planning to invest in this company
REL_resultsQ1Fy23.pdf (4.7 MB)

Did a quick review of numbers. >99% revenue is from Retail, COGS is ~80% of revenue. Gross margins are thin and so does EBITDA margins. Not sure if they’ll be able to scale the margins higher.

Out of 332Cr other expenses, 207cr is because of notional loss of Market-cap of RTN power. Normalized EBITDA margins are -1%.

Another point to note from presentation : Majority Shareholders of Revolt Intellicorp Private Limited (“the associate company”) and REL have alleged certain matters against each other, under the shareholders agreement between them and made certain claims and counter claims against each party which are subjected to arbitration and not crystalized so far. REL believes that the aforesaid matter does not impact the consolidated financial results of the Group.

Disc: No investments. Valuations also doesn’t provide much comfort for me at this stage. 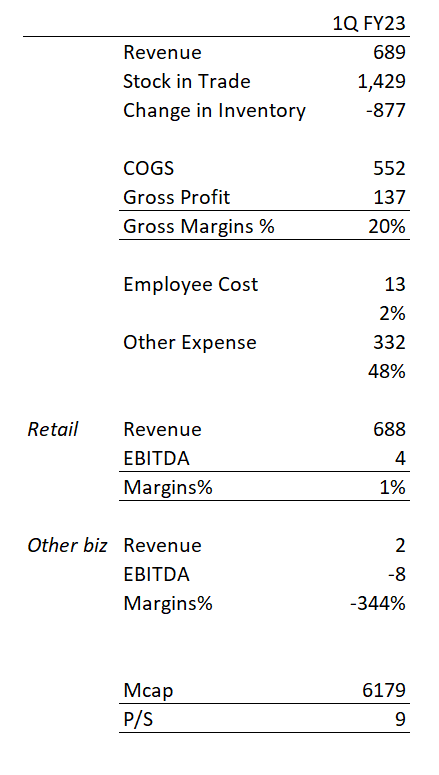 I was drawn to RattanIndia Enterprises because of the news that it is in drones too. This is what their website says," RattanIndia Enterprises Limited through its wholly owned subsidiary NeoSky India Ltd. is leading the way in drone industry in India with its 360° Drone-as-a-Product and Drone-as-a-Services portfolio. Throttle Aerospace Systems(TAS), one of India’s leading drone company is subsidiary of NeoSky India Ltd.

Throttle Aerospace Systems (TAS)- a subsidiary of NeoSky India Ltd. is one of India’s fastest growing drone hardware & software maker based out of Bangalore, India. TAS is a market leader in India in enterprise, defence and delivery drones. Throttle Aerospace Systems (TAS) is India first DGCA approved drone maker for civil drones and is licensed to manufacture military grade drones from Ministry of Defence."

But then I approached the company about the drones component in its business, but did not receive any response. I have found this:
"Diversified firm RattanIndia Enterprises on Thursday said it has acquired 60 per cent stake in drone company Throttle Aerospace Systems Pvt Ltd (TAS).

I am leaving it others to do further financial analysis of the company.

Disclaimer: I had invested a small amount in it, but got out as the drones were the only component of the company that excited my interest, but realising that the drones may not contribute substantially to its profits, I got out quickly.