Incorporated in 2008, Company started major construction activities in June 2012 with construction of GCS Medical College, Hospital and Research Centre in Ah medabad. Since then company has completed about 71 projects until Nov 2016.

The following table sets forth a breakdown of the Company’s total order book as of November 30, 2016, by type
of project:

Company’s activities are mainly concentrated in Ahmadabad and rest of Gujarat. It is bidding for projects in Surat and GIFT City. The following table sets forth a breakdown of the Company’s total order book as of November 30, 2016, by
geography:

The Company’s order book is not audited and does not necessarily indicate our future earnings. Book-to-bill ratio is about 1.3 which is low compared to infrastructure construction companies but PSP Projects executes mainly small ticket construction projects which are not awarded in advance like infrastructure projects.

In yet another interview with a TV news channel, company MD PS Patel said that revenue for FY2018 will be 650 Cr and bottomline will be 70-90 Cr.

Company will receive Approximately 144 Cr from IPO proceeds. IPO listed at a discounted to issue price. PSP Projects debuts at Rs 195, down 7% from issue price 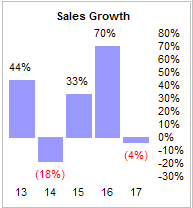 company’s sales growth is lumpy which is typical of construction companies. Some private clients provide construction materials free of cost to the contractor so revenue will be low for such contracts but margins will be higher. 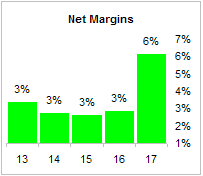 Margins have improved in FY17 and company expects to maintain these margins going forward. company is mainly a labor contractor at the moment but with IPO proceeds it will purchase construction machinery and will be participating in value added projects.

Company has managed to maintain good working capital mainly by keeping receivables and investory low. This has enabled company to remain debt free (on a net debt basis). It has short term borrowings of 62 Cr against bank deposits of 125 Cr. Usually companies with both debt and cash is a read flag. However, construction is a cash-heavy industry and PSP project is keeping cash as bank deposits and taking out short term loans from the bank which is secured by the deposits and interest rate on the loan is 1% above the deposit rate. Essentially short term debt costs company about 1% as interest expense on loans is offset of interest income from deposits.

Unlike infrastructure construction companies, PSP projects executes small ticket projects that are completed in few months so it recovers cash quickly. Company’s cash and deposits have steadily gone up over the years indicating that company is able to recover receivables quickly.

company is cashflow positive and does not really need funds from IPO for its ongoing operations. IPO is for benefit of listing and buying construction machinery which will enable company to take on bigger projects. 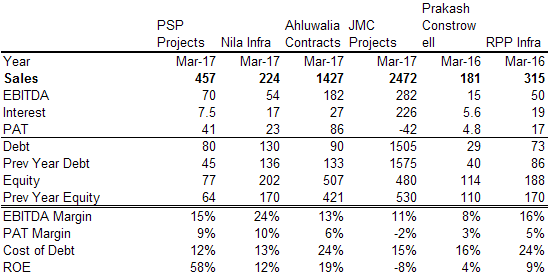 Companies margins debt levels and ROE is much better than peers.

Company is promoted by PS Patel. He is 53 years old and so far this appears to be a one man show. He has over 30 years of experience in the business of construction. He holds a Bachelor’s degree in civil engineering. He has also been featured in the book titled “Business Game Changer: Shoonya se Shikhar” authored by Prakash Biyani and Kamlesh Maheshwari for completing government’s infrastructure project before the scheduled time for which he received appreciation of Prime Minister, Mr. Narendra Modi.

Company paying a total salary of Rs 3 Cr to promoter family. This works out to be 8% of FY17 profits, close to upper limit of 10% set in Company Act. As a percentage of net profits of the company salary appears to be on the higher side but in absolute terms this amount is reasonable given the high profitability generated by the company. 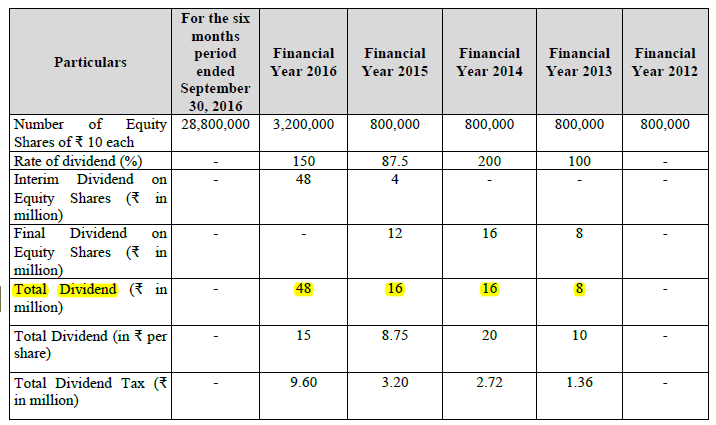 Company has paid dividends in the past. However, until IPO, promoter family wholly owned company.

Company is paying taxes. Its tax rate is about 30%.

company is a net borrower and only occasionally repaid loans. However looking at the growth rate of the company and its cash & deposits, this is not a warning sign.

Based on TTM earnings, company is selling for about 26 times TTm earnings. Based on management’s projections, net profits for FY2018 is expected to be about 70-90 cr against a current market cap of 1051 Cr. forward PE works out to be 13. However, this assumes near doubling of profits in FY2018 which appears optimistic.

Disclosure: Invested in IPO and thereafter.

Disclosure- I recently bought into PSP Projects on pre open@190, listing & more subsequently. My Rationale for doing the same was 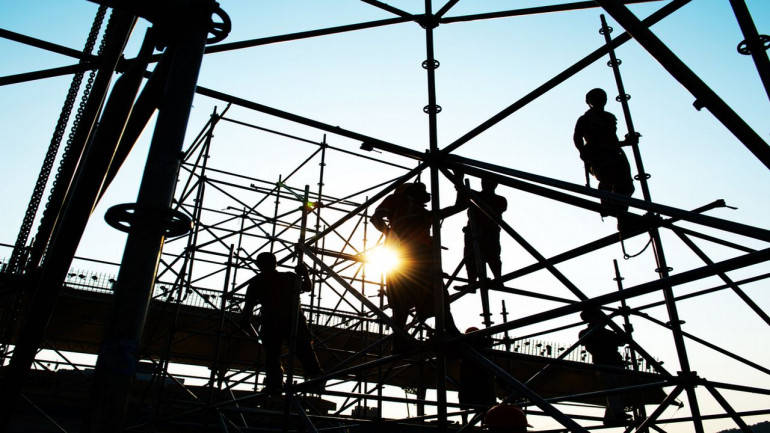 In an interview to CNBC-TV18, PS Patel, CMD of PSP Projects spoke about the results and his outlook for the company.

In an interview to CNBC-TV18, PS Patel, CMD of PSP Projects spoke about the results and his outlook for the company.

I am wary of the sudden rise in margins (doubling) just prior to ipo. If you see past track record, net margins have consistently been much lower. Cannot understand the reasoning.

Yeah…i went through that interview and guessed it’s due to project mix. But him saying this would be the new normal means they would now be doing only such private party high margin projects?

Today, in disclosure to exchanges, they have received orders worth 172 cr during q1FY18.

Not sure how much of these 1723 cr came after May 29, as most of these would already have been counted in 729 cr figure revealed by the MD on May 29? 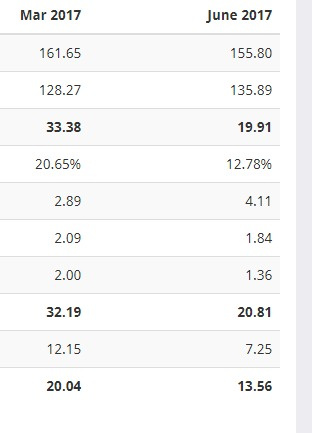 PSP received orders worth 515 cr during q2. Though one needs to find out the current order book status.

Rough estimates -
Assuming they executed 160 cr order book in q2, and assuming 172 cr orders that they received in q1 were taken into account in their previous disclosure of 723 cr order book end of May…

Anyone got any insights in this regard?

@yogesh_s after reading annual report and my job experience in real estate construction company.
There are two type of contracts
1.With material where revenue/order value will be high due to inclusion of cost of material
2.Without material where revenue is low due to exclusion of cost of material
Overall profits are almost same but due to inclusion and exclusion profit margins differ same was the reason for decline in revenue from fy16 to fy 17
So it doesnot matter which contract and contract type mix will determine margins Y2Y

@Mridul cash and equivalent include

This is in addition to 500 cr order inflow in Q2. This is a 30 months contract so this should give a good visibility over next 3 years. Sales for all of FY17 was 465 Cr. Book to bill ratio is now a healthy 4.

Sir I’m from Surat, regarding diamond bourse, land is been aloted way back in 2015 but till now no work has started and my friends form diamond market are not so excited as there main offices are in BKC so why do they shift from mumbai to surat. I don’t know that this info would be helpful or not.

That is nice. 2.5 year visibility at least from here. They will execute around 650 cr this year. They will still be left with almost 2400 cr order book post q4 this year.

Now with rising order book, would be interesting to see how they manage their working capital in order to increase throughput. They have lean BS, so can take more leverage.

thanks a lot. v infomative

Good first concall. Some things, which got clarified -

Overall mgmt sounded pretty conservative when it comes to margins/bidding. They said their is enough work to be done in Gujarat itself. Surat project will be a milestone which would open further opportunities for them (in terms of order size).

Item No. 6 – Approval of Contract/Arrangement with Director for consideration other than cash
To consider and if thought fit, to pass with or without modification(s), the following Resolution as a Special Resolution :
“RESOLVED THAT pursuant to the provisions of Section 180,188,192 and other applicable provisions, if any, of the Companies Act,
2013 and the Companies (Meeting of Board and its power) Rules, 2014 including any statutory modification(s) or re-enactment(s)
thereof and any rules thereunder for the time being in force, consent of the company be and is hereby accorded to the Board of
Directors of the Company to enter into a contract/arrangement for purchase of immovable property (known as “PSP House”), as
per the details given below at market value of `17,54,00,000 (Rupees Seventeen Crore Fifty Four Lakhs Only) and as certified by
registered valuer Mr. Bakul N. Desai, from Mr. Prahalad S. Patel, Promoter, Managing Director & CEO of the Company, who is the
legal owner of the said immovable property.

“RESOLVED FURTHER THAT consent of the Company be and is hereby accorded to the Board of Directors of the Company to
transfer the ownership title of land of the Company bearing R.S. No. 364/1, 361/2, F.P.S, No. 27, 24/2, T.P.S. No. 86, Mouje Sarkhej,
Taluka: Vejalpur, District: Ahmedabad and S. No. 186/2, F.P. No. 88, T.P.S. No. 86, Mouje, Taluka: Vejalpur, District: Ahmedabad
Opp. Applewood Township, Near Lakshya School, Sarkhej Sanand Road, Ahmedabad at market value of ` 18,18,45,000 (Rupees
Eighteen Crore Eighteen Lakhs Forty Five Thousand Only) as certified by Registered Valuer to Mr. Prahalad S. Patel, Promoter,
Managing Director & CEO of the Company, in lieu of consideration towards purchase of “PSP House” as mentioned above and the
balance amount to be payable in cash on either side.