SECTOR BACKGROUND
Awarding activity in road sector has picked up pace in the past two years and is expected to remain firm in the next 2-3 years. In FY16, the government awarded 10000 km of road projects and in the current financial year, it targets to award over 25000 km or Rs 3 trillion of road projects. This trend is expected to continue in the coming years.

COMPANY BACKGROUND
• PNC Infra Ltd (PNC) is a north-based EPC/BOT contractor (www.pncinfratech.com)
• Strong order book visibility: PNC has an order book of ~ Rs 5100 crores (2.5x FY16 EPC revenues). Further, PNC has won Rs 1374 crores worth of orders won from April 2016 till date, financial closures of which are expected to be achieved by October 2016.
• Strong execution track record: PNC has a proven track record of early completion of projects in a sector marred by inordinate delays. It has the distinction of being among the first few to receive an early completion bonus from NHAI.
• Multiple operating efficiencies: PNC’s four pronged strategy:
a. conservative bidding
b. operating in a core geographic cluster
c. ‘No subcontracting’ policy in critical construction activity and
d. a large equipment bank, have enabled the company expand its EBITDA margin 500 bps during FY13-FY16 to ~17%.
• In FY16, PNC enjoyed a 11% market share of the NHAI’s Rs 48,100 crore EPC order book, second only to the infrastructure behemoth, L&T (12% share).
• PNC has executed ~75-80% of its road projects in UP, Jharkhand, Bihar and Rajasthan. These states have a robust pipeline of road EPC projects over 2016-17 – 4 states alone account for 36% of the 6631 kms of road projects that NHAI intends to award in FY16.
• The govt is now acquiring 80-90% of the land before announcing the date for commencement for construction
• Gathered enough qualification credentials to independently bid for a single project to a tune of over Rs. 3,000
• Currently co is executing 16 projects in roads & airport runway sector
• Currently we have 7 operational BOT projects of which 5 are Road BOT projects, 1 is Road OMT project and 1 is Industrial Development project
• Our consolidated net worth as on June 30, 2016 is Rs. 1,364 crores whereas total debt is Rs. 1,722 crores. Net debt to equity comes at consolidated basis comes at 1.13 times.
• There are 17 new EPC orders worth Rs 15,000 cr that will be up for bidding
• Toll Revenues - Gwalior - Etawah MP Highway is Rs. 15.5 crores; Kanpur - Ayodhya is Rs. 69.8 crores; Kanpur Highway is Rs. 24.7 crores and Bareilly - Almora was Rs. 9.6 crores; Ghaziabad - Aligarh is 37 - 38
lakhs per day
• PNC has long history in the roads sector with over 15 years of experience in executing NHAI projects. PNC has track record of timely and before schedule completion of projects and received early completion bonus.
• PNC is focused on the northern region and is expected to be a strong contender for grabbing future opportunity in road construction from poll bound states like UP and Punjab.
• PNC has robust current order book of Rs 64.7 bn and further targets to add another ~Rs 40 bn of orders in the rest of the year based on robust pipeline of orders specifically in road space. This gives high revenue growth visibility for the next 2-3 years.

Understanding the Hybrid Model of Road Development
Funding - The government will contribute 40% of the project cost in the first five years through annual payments (annuity); developer to raise remaining 60% through debt or equity. Semi-annual annuity payments will be paid to the developer for the balance 60% of the project cost

FINANCIALS
Nos are from www.screener.in 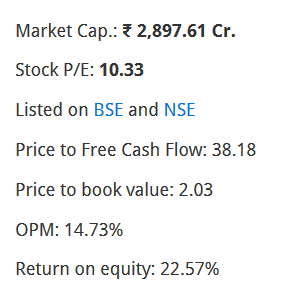 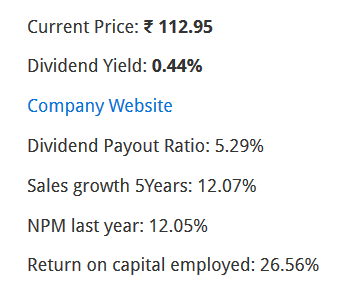 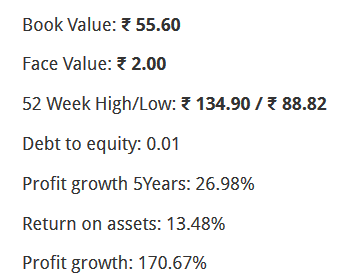 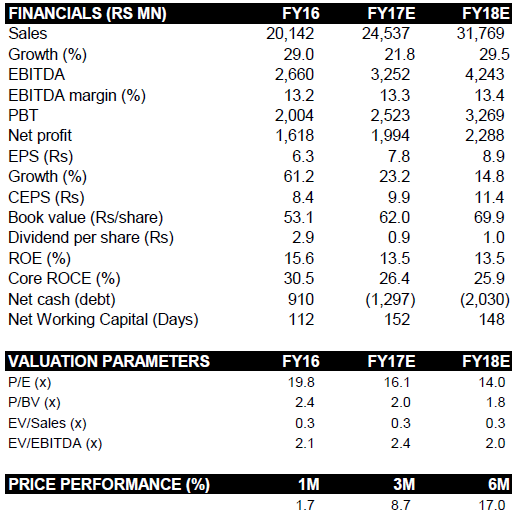 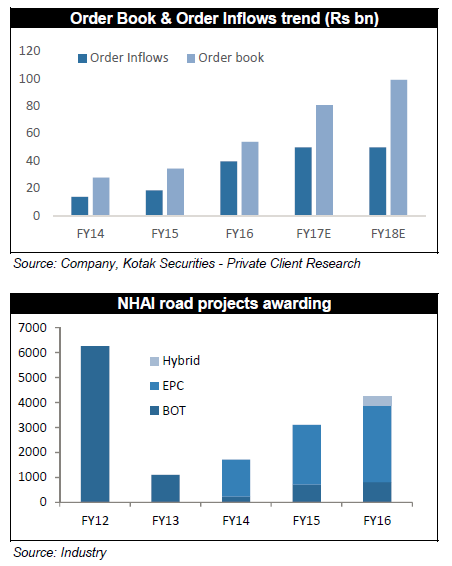 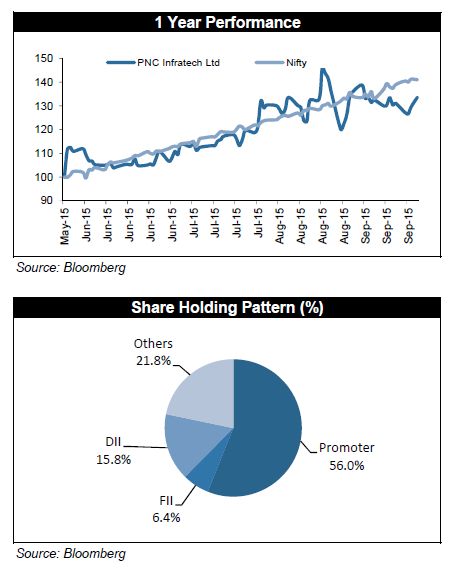 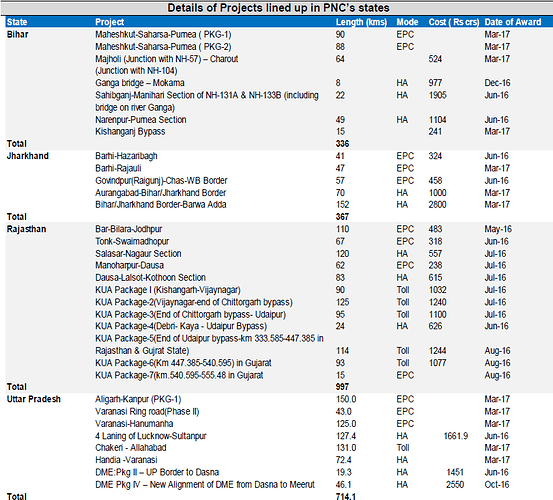 Disclosure: I am invested in the stock and my views are likely to be biased. Please do your own due diligence or consult a SEBI registered investment analyst.

Thanks Abhishek for the post. Road sector has definitely seen momentum in the last few quarters and continue to do so. Its a new business for me, would request your inputs to understand it more. They do two types of businesses - EPC and BOT/annuities.

Thanks very much.
Rajat

EPC segment is expeted to deliver strong EPS of INR 7.5 & INR 8.0 and RoCE ~18% over the years FY17E & FY18E based on strong order backlog given above. PNC has strong execution track record that results into good EBUTDA margins led to higher RoCE. EPC business could get multiple from 12x-15x.

BOT (7 projects) are not expected to perform well in upcoming quarters due to slowdown in industrial activities (as suggested by most of BOT players) led by demonetization impact. BOT Toll projects, difficult to generate RoCE. This will be hangover for this company either they don’t think to divest them. Asset light companies like KNR are getting higher valuations due to this reason.

My two pence:
I am not covering positives as these are already covered and known.
Enterprise Value is around 5200Crs is not cheap. The margin of safety is not very high. Also, their expanding in power sector is not a welcome thing. They have listed two projects on the site. I am not sure about the current power projects in hand and their focus on the sector. If they are pursuing this, I would like to be cautious about it.
Also, I am not too sure about the success of Hybrid Model of Road Development and how it is going to further stretch the balance sheet of the company. Remaining points about the BOT covered in other reply are applicable.

Let me attempt to answer some questions

Regarding Intangible - Concession Rights
Thats the right in Toll Share that PNC has earned. So typically in a BOT Model the operator has a contractual right to charge users . So he recognises an intangible asset at the fair value to the extent that it has a contractual right to receive - This is amortized over the period in which it is expected to be available for use by the operator.

I am an investor in PNC infra. Good to see post on PNC on this forum.
I have invested considering some of the rationale mentioned by @basumallick.

Recently inaugurated Agra - Lucknow highway has PNC as one of the four players. It was expected to get PNC a bonus due to early completion. This forms significant part of current executed project (Rs 16.4 bn). Any update on this project. Last con call they have intimated it would be in Q4FY16.

My key variable for investments - track record of before time execution, asset ownership and sector tailwinds providing revenue and profit visiblity, valuation comfort vs peers probably due to state in which company operates which I believe should not be there considering most NHAI projects are getting awarded in these states.

The country’s infrastructure sector, requiring investments of more than $1.5 trillion in the coming ten years, is set to get a boost with a dedicated fund of Rs.10,000 crore to provide credit enhancem

Hi Ashwini, though i have not analysed any of the companies but going by the comp table KNR looks more attractive. KNR falters on just one metric - low asset turns (could that be because they own lot of equipment which helps them complete work faster and make higher margins?? #just guessing). However on host of other metrics from the table, KNR seems to be doing better than PNC mentioned below -

Given i really have no idea about the businesses and I have gathered my thoughts solely based on the table, my interpretation could be completely wrong.

many thanks Ashwini. This is very helpful piece of info

As for private builder’s cash flows - are they fixed in advance by the govt irrespective of the traffic? If that’s the case then only risks to their IRR would the ones mentioned above or anything else is also there?

Few of the reasons I liked PNC was:

There could be other players who are equally good or better. Havent studied KNR so cannot comment on it.

Spark Capital in its report has said that such delays are visible in the pace of execution in all the companies. PNC Infratech is the worst hit with 80 percent of road projects awarded since FY16 are delayed. YoY quarterly profit is up 70℅ but operating profit is down by 17.6℅. They had a tax return of 28crs that helped them generate PAT. Is this sustainable, if not we should not call it as a good growth in profits. We should see PBT. It’s flat. In fact PBT growth should have been negative instead of positive. But lower interest cost and higher other income helped. Their interest cost fluctuate every quarter and we need to understand the reasons for it. We need to also answer if higher other income and lower interest cost are sustainable?

The Company being declared the L1 (lowest) bidder in the following two hybrid annuity highway projects of NHAI for an aggregate Bid Project Cost (BPC) of Rs. 2720.0 crore.

What we need to monitor is the financial closure of the projects won, because that is where the current set of problems are cropping up from.

The receivables and interest outgo is much concern for the company as it is comparable to reported profit and has increased tremendously in FY 16. Debt is increasing year on year on consolidated basis which also is a major concern and which I think led the company to opt for IPO.

Somewhere in AR16 I have read that loans has been given to RPs at zero interest rate. Please confirm if anybody else found that.

Please correct in case I am missing something. 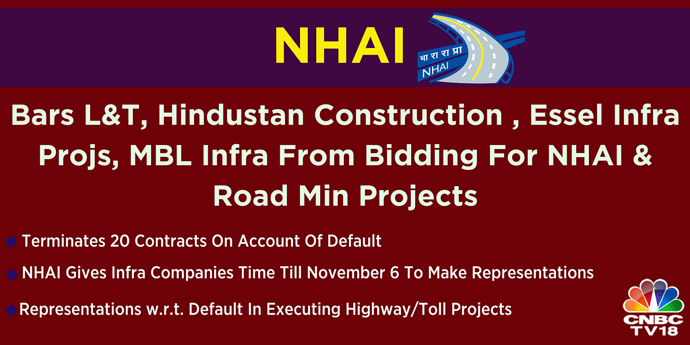