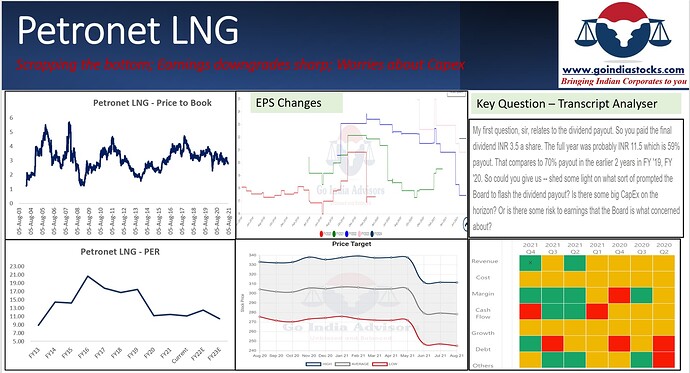 means that the announced capex for next 4-5years will largely happen in 4th and 5th year.

Interesting read , with Indian Govt still confused on its priorities of usage CNG, Ethanol blend , Green Hydrogen and EVs.
Early movers in Auto LPG in Mumbai have shut shop, Countries like Japan and Korea have for decades used and incentivized use of LPG in power generation during peak periods.

Good read on future aspects and why we have planned for heavy capex.

Since 2011, India has been the world's fourth largest importer of LNG , due to an increase in domestic consumption and a decline in domestic production.

Something from Shell itself.

We cool natural gas to make a liquid, shrinking its volume 600 times for easy shipping to energy-hungry places around the world.

Also, if everyone gave analytical details and ground story like their annual report, we won’t need any tabular details from other websites. Really loved it.

It is good to see that they are not going by typical government process which leads to award of contract to lowest bidder and quality and technical capabilities take a back-seat. I don’t think awarding contract to L&T would ever be a bad idea.

I am going through this thread in detail.

There are some concerns about PSU companies in general, hence I have stayed away from this business for a long time.

I would like to know if there was any action against the management in 2019, for the charges which were discussed in the parliament? It seems that, there is no mention of this after one posting in this thread.

Also, I am unable to understand the low valuations of this company in spite of about 12% EPS growth in the past 3 years, as per screener, and also I have validated this in various other public forums and annual reports.

What is the exact concern over here, due to which, market is not convinced about the LNG story? It would be good to know the perspective of others.

I am trying to understand whether the current Russia-Ukrane crisis will have negative impact on companies like Petronet LNG or positive impact, with my limited understanding of gas prices (Both spot prices and long term contract prices).
Will it reduce margins of PLNG further if gas prices escalate upwards or is it benefecial to PLNG?
Any help in this regard is appreciated.
Disc : Invested.

Where there is smoke, there is fire.

A series of events that might be relevant to understand if corporate governance improved inside Petronet LNG after the alleged whistleblower complaint of corruption:

The MD and CEO, Prabhat Singh resigns in September 2020 although he was eligible for an extension. Interviews were setup and AK Singh was announced as a replacement. What is interesting is that Petronet made a slight but significant change to the hiring rules which prevented retired executives, above the age of 60 years, from applying. This effectively prevented Prabhat Singh from applying though he was eligible to apply for a 2 year extension.

This article in the TOI seems to indicate that the reason Prabhat Singh’s term wasn’t extended was probably linked to the allegations of corruption received against him although it is likely TOI is conjecturing as much as I am here. Prabhat Singh was appointed Managing Director and CEO of Petronet on September 14, 2015, for an initial period of five years

Prabhat Singh eventually joined India Gas, a 50:50 JV between Reliance and BP, as MD and CEO. India Gas is an unlisted company in the CGD space.

if you look at the model of PLNG their business model is similar to toll gate based model. Anybody bringing in their cargo has to pay a particular fee for using PLNG services (regasification, bunkering etc.). 90% of their capacity is booked under long term contract which I would say a secured business for them and in no way impacted by gas prices. Even if customer could not able to use the service, he has to pay as per use or pay clause. Remaining business is of short term (short term contract may range from 15 to 180 days) nature and would be impacted due to non-utilization of capacity as offtakers will be unwilling to use LNG because alternative fuels would be cheaper. Further there is a key risk in case of PLNG as their promoters are their major customers and in past they have invoiced use or pay charges to them but till now they are not able to collect and have written off some of the amount.

Short answer is no. PLNG has long term fixed contracts. This does not buy from the spot market. This kind of contract is good in current scenarios, but when prices go lower PLNG still bound to pay fixed prices.

In general any import which India is doing from Russia seems to be unaffected to large extent. There are logistical issues, since transport needs to be either via Caspian sea, Iran then to Indian ports. The other option is via Finland. Anything which India imports from Ukrain has surely affected example sunflower oil or any other minerals.

Dear Mayank, trust 80 % of the PLNG customers are themselves ! . Hence, the balance 20% are outside.

All PLNG long term contracts are linked to Brent crude price. It is 12.67% of brent crude barrel price for one mmbtu of LNG. One mmbtu is equal to approx 25 cubic meters of gas. Therefore it is a very dynamic price formula, based on daily oil market conditions.