Recently i came across Parag milk Foods IPO will hit the market. is it worth to invest ??? How Parag Milk Foods Got it Right with Cheese | Forbes India

This is interesting article covering background of founders and their journey.

Disclaimer - planning to invest in ipo

Where can we get IPO prospectus or company’s historical financials?

I’ve been a lurker here for a while, but have resisted commenting due to my lack of knowledge compared to others here. Earlier today a friend called me to ask if I was interested in the Parag Milk IPO and I was surprised since it was the first I heard about this.

The reason I’m posting here (and the reason for my friend’s call) is because I had a passing association with the company about 5-6 years ago. While I was never employed or received any compensation there, my colleagues and I provided informal assistance to the team that was implementing SAP software there (the primary vendor was IBM) and have visited their Manchar plant and interacted with middle management on a few occassions. I also have some experience in the dairy industry from having implemented SAP at another mid-size dairy which competes with Parag in milk (but not in by-products).

It’s been a while since I visited the site, but from what I remember Parag seemed to be a very professionally run organization that believed in the value of technology. Their infrastructure is among the best in India and I would rate it second only to Amul (I visited their Anand plant and had the privilege of meeting Dr. Kurien many years ago).

These are all the points that I can think of. I’m glad that I’ve been able to contribute in someway to this site which I’ve been visiting long before I even registered. If you have any follow-up questions I’ll be glad to try and answer them to the best of my ability. Please note that I’m no expert in the dairy industry - I work in software but spent more than a year on a project in the dairy industry, located in the general area where Parag Milk.

Gowardhan has a good market presence in Maharashtra and parts of Karnataka but is limited elsewhere.

I’ve heard that name in North India at several occasions so the marketing is not bad. Milk products like flavoured milk, cheese, whey, etc sell on brand name and new markets can be explored easily. That will be the key to Parag’s expansion going forward

By the way, the subscription is open and the last date is tomorrow. I read the prospectus and the list of risks is scary (almost 35 points) but I’ve applied nonetheless.

D-mart also stocks their products along with Amul’s.

I’ve seen them outside Maharashtra and Karnataka, but their presence is limited compared to Amul & Nestle.

I seriously considered applying for the IPO, but in the end I decided against it mainly because of two reasons

So I will be watching this stock, but will not be investing at the moment.

Even i feels same that IPO is priced slighly high…

I don’t know why would you pay for this kind of business(simple which anyone can do with same quality) with PAT margins of just 2% and I read in some report that there ROCE is around 12%. With such ROCE I wont even invest if somebody gives me a cigar butt

Did anyone attend the con-call? Any transcript available?

A brief look at the company’s plants and processes : here and here

The Q3FY17 results were disastrous to say the least. On one hand they keep harping on the brand story and on the other hand cannot manage price inflation on their key RM and can’t pass on prices in fear of losing market share. Hah! 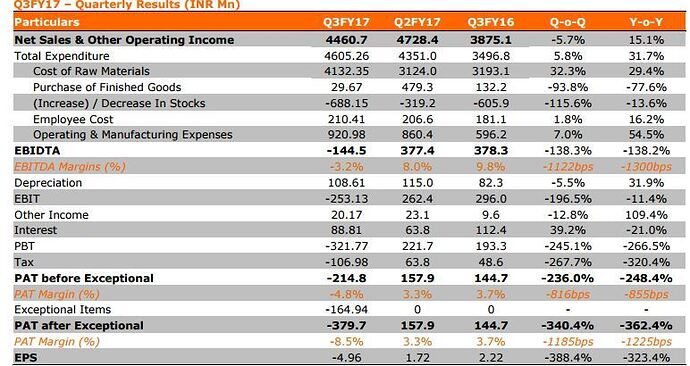 In a nutshell they faced 20%+ price hike in raw materials which could not be passed on. Company has taken a 8% hike in Q4FY17 and hopes to pass on the remaining in Q1FY18. Also the Exception VAT payoff is an item from the past and the company seemed confident that it is more of an one off and there would be no further negative surprises in future.

Management responses were mostly vague and they kept harping same high level strategic gyan in all responses. Doesn’t give any confidence on the brand and their pricing power. Also stock is very expensive even after the 40% fall from 52W highs. Goes on to show how overpriced the IPO was. Situation might normalize in 2-3 quarters.

Only good highlight from the call was the launch of Whey Protein. Read more here

“We are entering the Rs 2,500 crore (both through organised and unorganised channel) market with an initial 10 percent market share. In one year we expect to capture 20-22 percent market share of this premium product category,” Parag Milk Foods Chairman Devendra Shah told reporters here.

The concall was totally useless. All vague gyaan no straight answers from the management. I was totaly disappointed and felt the same about some people who were asking questions.

Parag said milk prices up20% while peers say around 8%, that was a big point of contention. Even there they were not very clear in answers. Just 3% ad cost yet negative at Ebidta level and Pat level

Company arranged special investor meets for the fund houses and large investors after the result fiasco in Q3FY17. Given the FII holding is at 27% and additional 4% with mutual funds, company can see sustained selling pressure from these quarters.

This is just a commodity play

This is just a commodity play

Not sure. Milk may be a commodity play, but brand specially in B2C might play a role in milk products. Company has spent a lot in Q3 as evident from this campaign. 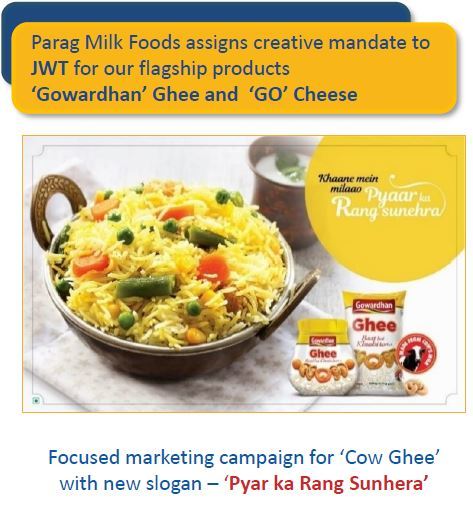 We eat cheese and other milk products at our home. Have tried Gowardhan/Go cheese. Didn’t like it. We prefer Amul or Britannia. I guess Parag will struggle to compete in “value added products” market since Amul has vice like grip on this market. Also MNCs like Danone, Nestle are bringing their global portfolio to India. Other players like Creamline dairy (Godrej Agrovet investment) , Britannia, ITC, Tiramula Milk ( Grope Lactalis SA invetsment) are upping their ante. So as market grows, the competitive intensity is growing faster. It may have some steam left in terms of growth but it is already priced in the stock price.I do not see great investor returns from this point onwards.

Parag said milk prices up20% while peers say around 8%, that was a big point of contention. Even there they were not very clear in answers. Just 3% ad cost yet negative at Ebidta level and Pat level

The base YoY price rise in Rural is 5.2% and Urban is 3.3% for Nov 2016… This is the price trend in consumable milk, we should see the price rise here with a quarterly lag. 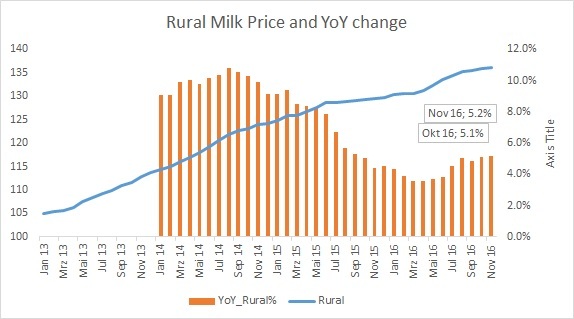 We eat cheese and other milk products at our home. Have tried Gowardhan/Go cheese. Didn’t like it. We prefer Amul or Britannia.

Thanks @Marathondreams. Any sort of actual product feedback is really good. Was the experience with a particular variety or in general you found Parag products inferior/not in good taste compared to Amul/Britannia ?

True that. Here is a very interesting video on the entire Cheese making cycle at Amul. Watch here
Also note the waste creation part from which Whey is produced.

The Cheese manufacturing process is highly complex, specially with multiple varieties and SKUs (as seen in the video). So it requires heavy investments and as a result the cheese industry is highly organized, while share of organized sector is only 20-22% in case of milk.

Another important point to note is a large captive cheese production paves the way for whey production. Paraga has the largest single location capacity in India (40MT/day which is being expanded to 60MT/day). So it creates the opportunity for strong foray into whey protein as well.

The main action and pie in cheese market is on the institutional side primarily the Hotels-Restaurants-Catering business or HoReCa segment as it is called. So while Amul and Britannia rules the roost on the retail side, Parag is the second largest player on the B2B side (32% market shaare) behind Amul (the clear market leader with 40% market share),

And an intereting point is the growth of Cheese at Parag is led by none other than an Amul veteran of four decades!

With its portfolio boasting of tubed cheese spreads, cheese powder, cream cheese, wedges and cheese sauce, its latest product extension has been on the behest of B M Vyas. The independent director and consultant to Parag is no outsider to the cheese market. He has spent almost four decades at the Gujarat Co-operative Milk Marketing Federation (GCMMF), which markets milk and milk products under the Amul brand. Vyas spent 17 years as its managing director.