You may surprised to see one stock suggestion in this late Sunday evening . But there is one special reason for this . As many of you are aware , SEBI’s new Research Analyst Regulation will come to effect from Tomorrow. I am not sure about the exact nature and scope of this and still lot of confusion is there . Not sure whether there is any restriction for expressing opinion as an ordinary investor without claiming as a ’ Research Analyst’ and not accepting any remuneration for the same . Talked with lot of people related with the industry and most of them shared similar thoughts and confusion in this matter. Till some clarity emerges , I may not be in a position to continue postings like the previous one’s .Expecting some clarity in this matter at least by month end. Due to this reasons , now I forced to prepone next weeks posting. Once again my sincere thanks for my friends and all blog readers who extended overwhelming support in past four years.

I can imagine lot of raising eyebrows after reading the name of the company we are going to discuss . Taking an anticipatory bail in the beginning itself,this is neither a stock for investors with average or below average risk taking capacity nor for someone going to ask ‘ It is not moving , what should we do ? ‘ , on a daily basis . This is not a stock to put your entire corpus dedicated for investing in stocks but only a small portion you can afford to ignore for a long time. This is one company with a balance sheet in bad shape and already written off by market participants .You may ask one question at this point – If the situation is like this why we need to waste our time to study this company ? . Only because of one reason , I believe ,this company miserably failed earlier mainly because its promoters come up with a business before its time. So , if and only if you are interested to know about a high risk company , continue reading …

This is one company whose IPO oversubscribed by a whopping 50 times and the shares listed at a premium of 120 % to the offer price. Once it was a darling of investors including top institutional and foreign investors and stock price hits a high of Rs.1088 ( Before stock split from Rs.10 to current Rs.2) .From 2012 , company concentrating in two business verticals – True Colour LED Displays and LED Lighting Solutions . True colour LED Display business consists of Passenger Information Displays for Railways,Mobile Displays fitted on Trucks or Trailers,LED Advertisement Boards…etc .LED lighting solution business consists of Solar Street Lights , Solar Lanterns, Railway Coach Lighting …etc. Company’s performance badly affected due to weak order flow from Railway because of Indian Railway’s pathetic financial situation, Severe recessionary situation in over all economy …etc. Company’s promoters pledge their shares and on account of non repayment these shares invoked and sold in market which resulted in sharp decline in promoter holding from 40% to less than 10 %

Last year company received an order from Nashik Municipal Corporation (NMC) to replace 69,541 street lights ( News HERE) . This order is the largest such order so far in India cost close to Rs.150 Cr . Company faced lot of legal challenges to execute this order and finally it got permission to do the same. As a note to latest financial result ( Read note No.7 in this LINK) , company clarified that they started execution of the same during the end of the September quarter. This order should be completed in next six months. In another recent development from company is its introduction of 3-D hologram technology using LEDs .This technology widely used by Telugu Desam party in the recently concluded elections ( Read the detailed news HERE) .The most important development happened in MIC in recent times is the allotment of 74,462,070 share warrants to promoters and others . ( Even though some allottees are classified as public ,I strongly believe they are friends and relatives of promoters itself Read the details of this allotment HERE) .These warrants will be converted into shares at a price of Rs.3 . On conversion, promoters and their interested parties stake in MIC will reach close to 50 % from current level of below 10 %.

It is true – its future is really uncertain , but still some hopes are reviving . As I said at the beginning its products came before its time . Ten years back usage of LED was limited in various applications .But now people well aware about it and accepting as a good option for energy saving . One of its major customer was Railway and after a long time Railways’ financial health is expected to improve going forward . Our prime minister recently indicated green signal for privatization and renovation of railway stations ( News HERE) .MIC is the only company approved by RDSO for 13 types of Railway Coach lighting products to be used in Air conditioned coaches. Any improvement in Railway’s financial health and renovation of coaches and stations may augur well for MIC going forward . Prime minister’s prestigious smart city projects and Andhra Government’s decision to build world class capital city for the state may increase the use of LED based products as a best alturnative for energy savings . If company can successfully complete the ongoing Nasik municipality street light project , it will surely referred as a testimony for company’s ability to execute similar type large projects. I believe , after a long gap promoters are confident about the future of company and that is why they are hiking their stake from current 8 % to a decent level by pumping substantial amount. Company also decided to sell one subsidiary in an effort to reduce its debt level.

I know , Lot of negatives are still there and it is not suitable for low risk takers . But now the stock is available around Rs.4.50 and promoters are subscribing shares @ Rs.3 . As a product reducing power usage ,relevance of company’s products are increasing with any increase in power cost . Nowadays more and more people using LED based lighting systems in place of conventional lighting products . I hope ,if management is willing to show some sincere efforts to revive the company , it is the right time to go ahead . Considering the high risk nature, suggesting extra care and due diligence before any action.Stock is listed in both exchanges and trading @ less than Rs.5

Readers give your views…Is it worth Investing.

My concern is increase in equity and their Joint ventures with many unlisted companies.

Disclosure : Invested from levels of 15

Recently they received a patent for LED Digi-posters till year 2028.

Is it possible that leyard electronics could become promoter of MIC or could buy out MIC electronics.

There is a high chance of leyard acquiring promoter stake. Leyard as company is very aggressive and in growth path. After conversion Leyard will hold 21 % stake higher than the promoter.

Hello spiderman me too want that

but i talked to CS of MIC Mrs. lavanya she told me that “Sir its not possible”. But i didn’t ask why not?? Many positive news involved in MIC it has to become multibagger

Already Q3 is coming to a end. Till now they are not able to launch HOME LED fixtures in collaboration with LG Innotek. MIC had lot of JV earlier also but it never went as per planned. I feel Leyard sooner or later will take over the company since MIC is approved supplier of Indian Railways.

Yes, We should talk to CS for this LG news i think after that we could
get clarity on this news. Launching consumer based LED will be huge
positive for MIC.

MIC Electronics Ltd has informed BSE that the Company have been granted a patent by the Controller General of Patents, Designs & Trademarks, Intellectual Property of India, for an invention entitled SOLAR RECHARGEABLE LED LANTERN for a period of 20 years commencing from 25th day of August, 2008.
http://www.bseindia.com/corporates/anndet_new.aspx?newsid=34b9c7cd-4f8b-4faa-87b3-60985f6debdf

Spiderman,What chart telling about MIC for long yerm. Whats wrong with the MIC everything is in line but so much selling pressure.

There is ntg special in chart. Stock is in a range from 13 to 20.Unless it breaks that range i dont expect fireworks. Third quater is already coming to an end but still they have not launched LG home LED fixtures. Unless we get some consecutive positive news it is better to avoid mic.

Yes, they should keep updating with news in MIC but investment of LEYARD making me strong towards MIC holding.

Spiderman we should keep updating the investors about MIC.

Perfect base for strong rally 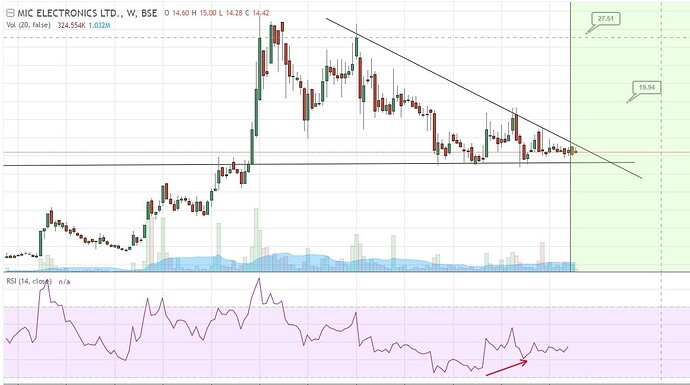 What you have drawn here is descending triangle pattern. This is continuation pattern so trend shouldn’t be reversing anytime soon.

Agree with both your views, lets see, if it Make or Break

Could anybody tell how much debt it has after this recent conversion and OTS with SBI bank.