I am also curious why markets love MFL and treat MOL as an ugly duckling. MFL is also commodity Chem. It cannot be promoter history. Perhaps I am assuming MFL products have a less seasonal and more predictive perhaps domestic demand pattern. Perhaps something that imports cannot compete with. MOL has a higher export exposure, high agchem seasonality and mostly postpatent chemicals that may lose if China opens up.

Note that currently MOL AgChem is benefitting from seasonal tail winds, esp in the Americas. I am a shareholder in UPL and UPL is also showing the effects of these tailwinds (UPL has its own set of issues).
MOL agchem products are postpatent, I would love to hear from others what their moat is. MOL is bold

In pigments, titania was a bold move as an import substitution, enjoys demand predictability.

Agree, market is ignoring this company for quite some time, maybe because of past CG issues. TiO2 foray is not a small thing and the way india is progressing to become a major supplier of agrochem, company is rightly placed. I am expecting 900 Cr EBITDA by FY25 and basis the multiple one considers is fair for the company, the expected return can be quite handsome.

Per their CEO, they are confident that by 2025, they can achieve a top line of Rs 4,500 crore and the EBITDA is likely to be around Rs 765 crore and this compares to around Rs 2,500 crore run rate last year and a PAT figure of around Rs 170 crore.

Unfortunate incident of fire in the warehouse. Fortunately no loss of human lives or impact on production. Impact still being assessed.

Edit: looking at past posts from @virajkhatavkar fire incidents seem common for Meghmani and requires review of my investment philosophy here.

I agree.
It seems to be periodic in the case of MOL.
Studied the con-call , the view from management is that everything is on track with some hiccups due to global events.
But events like these raise definite questions on the picture behind. Its so hard to analyse and get answers to these kind of situations. Its like a mental dilemma for me right now, on one hand i want to add to my investment and buy on dips but these kind of repetitive fire accidents raise a definite question.

@ayushmit : What is your view on the outstanding RPS of 198 Cr. The senior gentleman on the call asked very pertinent question on raising debt to finance capex while this money is not called yet even though MFL has been generating good cash.

Yes, it has been an overhang. I think it was an earlier arrangement and the loan was for 20 years which the management has reduced to 5 years. But I agree that this should be returned asap. And perhaps this is the reason why MOL trades at low valuations while MFL has been re-rated

Disc - I have a small allocation in Meghmani Organics, purely based on undervaluation and capex coming on stream.

One of the issues is capital allocation decision with TiO2 capex. Company will have 33K MT capacity at the capex of ~600cr.

There are two grades ot TiO2 - anatese (lower grade) & rutile (higher grade). Following is realisation chart of TiO2 (rutile) grade. Long term average price of TiO2 is 200rs which went to 300rs in commodity upcycle. The prices are now correcting and they have settled at 240-250rs.
Anatese grade prices are 30-50rs lower than rutile grade prices.

If one wants to make 20% ROCE, required EBITDA margins are even higher.
If WC goes to 3 months, margins have to be higher.
Optimum CU will be 85-90% and not 100%.
Company will make anatese grade of TiO2 first which has lower realization and hence lower margins/ROCE. 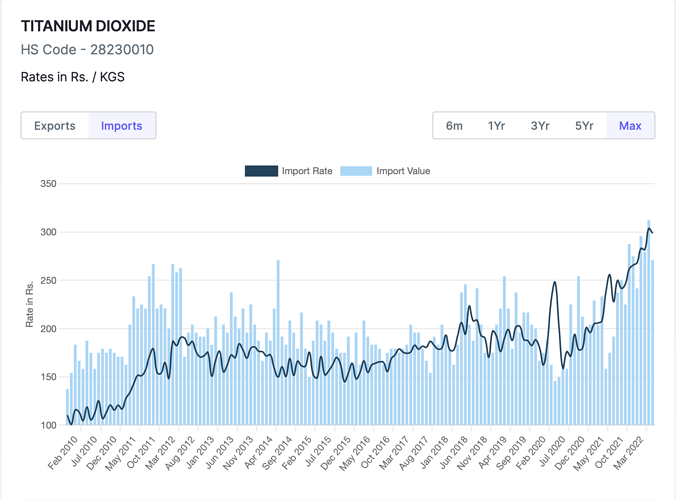 Overall, it is quite clear that TiO2 will be a drag on capital efficiency and ramp up will be gradual. Eventually whether it will generate 18-20% ROCE is not yet fully settled.

Further, capacity in China is 46L MT and buyers for TiO2 will be 5-6 really large players who will try to extract as much purchasing discount as possible.

Some support in the form of PLI, ADD will help to make this business capital efficient. Otherwise, it remains a poor/average capital allocation decision.

Supply agreement for 5 years with one of the leading Global Agrochemical
Company.

1- Update
MCNL a wholly owned subsidiary has entered into a licensing agreement with one of leading domestic fertiliser manufacturer for producing Nano Urea (Liquid) Fertilizer by using their domestically developed patented Technology.

MNCL is expected to commence the commercial production by Q4 FY24. MNCL projects to achieve a top line of INR 1,000 crores on an annual basis.

2-Understanding on How is Nano Urea Different as Learned from Internet
On an average, a farmer in India applies two bags of urea in one acre per crop season, with the quantity varying slightly according to the crop. According to a press note from IFFCO, field trials have shown that a 500 ml bottle of nano urea can replace one bag of conventional urea as it has 40,000 ppm of nitrogen, which is equivalent nitrogen nutrient provided by one bag of conventional urea.

Mark the point that it’s being implemented in 100% subsidiary, so all the cost will be borne by MOL and then all of sudden something like MFL deal may happen and the public shareholders will again be wondering…

@rupeshtatiya Thanks for the thoughtfully done analysis, Rupesh ji. Just one doubt, you have calculated WC requirements on revenue. Shouldn’t this be done on Cost of goods and services?

Meghmani organic results are out. Pigment business significantly impacted and drags the bottom line.
Along with that significant jump in interest cost also impacts profits. This is now even more pertinent and again raise corp gov issue. On one hand MOL pays higher interest cost but does not recall loan given to MFL and MFL has announced dividend in this quarter. Very bad for MOL minority shareholders.

Since mr Ayush has attended the concall request him to shed some light on the other income and finance cost accounting they have spoken. They are saying 73 cr as gain ( shown in other income)and 38 cr ( shown as finance sort) loss both are as non realisable profit and loss on 9 month basis. Can ayushbhai pl throw some light on this

Listen concall but unable to understand why finance cost increased so much? Management is telling about Mark to market losses due to Euro strengthing and are notional losses. Can anybody help us to understand more clear picture.

Management has cleared the picture about Nano urea and TiO2. Investor fraternity is very much concern about quality of TiO2. Management is saying that they have hired old kilburn employees and have long experience in pigment manufacturing.