but the best thing to judge the business to ask their participant how their life will be if these businesses stop to exist.

i think they will do something meaning in life for sure.

My point is not against or pro trading, my point is if punters are making most of the volume in mcx then its not a growth stock, then its hard to estimate how many punters will be trading with volume in 10 years from now.
I know many commodity traders shifted to something else, trading is tough profession not everyone makes money ( Mostly casino like reward distribution ). So, we have to model this business accordingly.

India will emerge as a significant consumer of commodities over the next decade and MCX is rightly placed to milk that opportunity and it is not just a gold play for me.

Thats what i was asking , Is the volume has any correlation with commodity production consumption in India ?
Why would steel company pay CTT if they can directly deal with a iron ore miners based on LME prices.
Do they hedge in MCX ? Or they hedge in LME ?

After the RBI’s restriction on hedging at overseas exchange, the volume shifted to MCX.

Do we know how much of it as % of revenue today ?

Agreed the revenues are hard to predict, that’s the reason why the virtual monopoly business (non - agri commodity) available at a throwaway valuation of 20-25x. But, the way the management is approaching towards adding new players as well as new products, it will attract much of the non-trader volume.
Coming to your point on volume and trading as a profession, the same is applicable in case NSE & BSE too. I had seen people earning consistently from the trading period over the span of 10 years or so. And also in case of commodity you have something in commodity that have some market externally too, but in case of equity we have only a invisible shares.

I don’t know the % of revenue as of today, but it’s now next to impossible to trade in overseas exchange for hedging specifically for gold. Gold hedgers need to get into MCX/BSE/NSE.

MCX will trade those commodities more which has domestic shortage like gold/silver, oil and other base metals. Iron ore is not something in shortage in this country and steel mills will have own source sooner than later. I don’t think it will be actively traded even 5 yrs from now. Steel mills might be interested in active trading of some standard grades like rebar, coils etc

I have been trading in MCX since its inception. The current bump in volumes is only due to the increased volatility in Bullion. The fact is, volumes are down drastically across all other commodities.
Crude Oil volume is down due to 100 percent margin. In addition, all Base metal and crude oil mini contracts with considerable volumes were discontinued 6 months back. Also, change in delivery specifications has led to drastic fall in base metal as well precious metal volumes in last week of expiry which is 25 percent of trading days in a month.
Furthermore, all the new initiatives like introduction of options have failed to enthuse traders.
According to me, The only upside trigger for this business would be a reduction in CTT which looks difficult in present situation.
Below is a snapshot of the indicative drop in volumes which spans across all commodities barring bullion

Joining hands with IEX to launch electricity derivatives. Good LT trigger for both. These are big markets in some overseas markets such as US, EU.

Disc. - Invested in both IEX and MCX from lower levels.

NCDEX IPO is on the cards , how to compare these numbers with MCX which is known as market leader ? 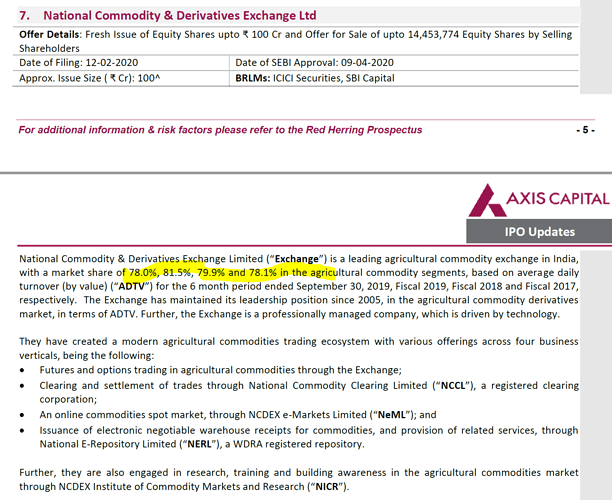 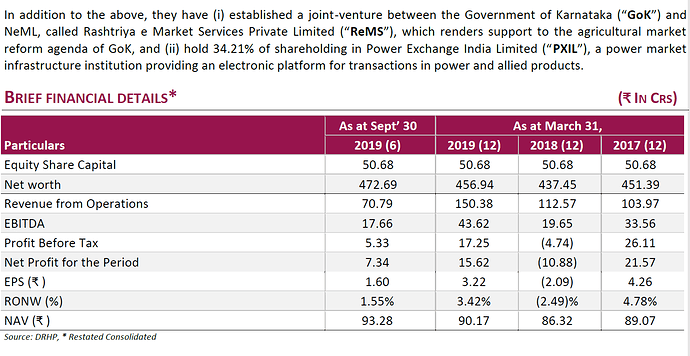 Would MCX qualify as a cyclical stock? Most of the business comes from trading Gold/Silver based financial products and that seems to suggest that people will buy these financial products when the equity markets are down and vice-versa (as a hedging option). I notice there is no great increase in the top line or the bottom line over the years despite this being a phenomenal platform business with a negative working capital cycle.

Curious to know what the other boarders think of this.

Are you referring to top-line or bottom line growth?

I means top line .More on basis of structural growth in commodity trading.

Two data points that stood out for me:
“During 9M FY2021, total quantity of 47,976, MT of base metals has been delivered through
the exchange mechanism.” - wish they had compared this to last year data. To show if actual hedging is happening or its only speculator driven market.

“The ADT in overall commodity futures increased by about 2% to Rs.31,509 crore during the
nine months of FY2021 from Rs. 30,987 crore during the corresponding period of FY2020”
Good to see they are increasing their market share but actual volume increase has only been 2%!

If the newly enacted farm bills were to become laws, the main beneficiary would be NCDEX which is about to get listed…

So is MCX only a bullion proxy?

Disc: Invested, and interested to buy more looking at PPFAS increasing their stake, but not truly convinced about its future growth

It is a truly a long term bet for me after getting in at lower levels. I don’t look at qoq numbers so closely only because there were quite a few trade timing restrictions this FY due to Covid-19 which led to volume drop and then they had crude oil fiasco. If someone believes that India would begin to catch up in manufacturing sector overtime, MCX would be one way to play that. We all love to do bargain hunting and MCX/IEX would be platforms to optimise your input costs in the longer run. Look at how China has popularised their own comm exchanges which India as a big consumer of commodities could do as well.

Is NSE planning to come up with an IPO for an exchange similar to MCX? IF so, how does it affect MCX as NSE is a more broadbased platform than MCX? I saw somewhere as forthcoming IPOs something like NSEDEX/NCDEX

There has been no increase in the overall revenues since they are in line with transaction volumes.
Transaction volumes are down over 40 percent since 2013 after imposition of CTT. It costs much less (both impact and transaction cost) to trade commodities on foreign exchanges rather than India.
In NSE most of the volume shifted from futures segment to options after imposition of STT, MCX doesn’t have this luxury. Globally, options in commodities are illiquid and do not see as much volumes as equity options.

Margins on MCX are much higher than they used to be few years back. Earlier, metals/energy products could be traded with 5 percent initial margins. Today margins are over 10 to 20 pct. Higher margins reduce prospective returns for proprietary traders driving them to greener pastures.

Infact, it seems that the number of members have reduced from over 2000 in 2010 to 700 last year as seen in the annual reports.

Also, over last year, Contract specifications of most commodities have been changed from cash to physical settlement, thereby skewing the market in favor of physical traders who are not the primary drivers of volume.