Mastek Collaborates With Microsoft To Organize A Hackathon For Strengthening...

With a focus to enable Business Agility for its customers as well as accelerate internal transformation programs, the Mastek 'Innovation team' collaborated with Microsoft to drive Hackathon across... | March 2, 2022

Mastek is hitting the right cord in term hiring talent in the US.

They have hired this guy who has extensive experience in US Tech sector including M&A. Looks like they are preparing for quite a few acquisition(s) in the the US.

Another deal win in UK

From article- Mastek will deliver 24x7 Level 2 and Level 3 Live Service Support for half a dozen business services platforms (made up of 32 key micro-services). We understand that Mastek already provided some of the services but that the scope has now been increased and the contract moved from an interim arrangement to a professional managed service agreement

With UK - Post brexit and recent geo politics - a lot more govt programs would need a revamp and upgrades, Mastek has won above deal despite Development done by a consortium of IT heavyweights( IBM, Capgemini, Cognizant etc) and each of them having capabilities to deliver same set of services. Speaks about Mastek stronghold.

This is Mastek’s first investor day in probably in last two decades. 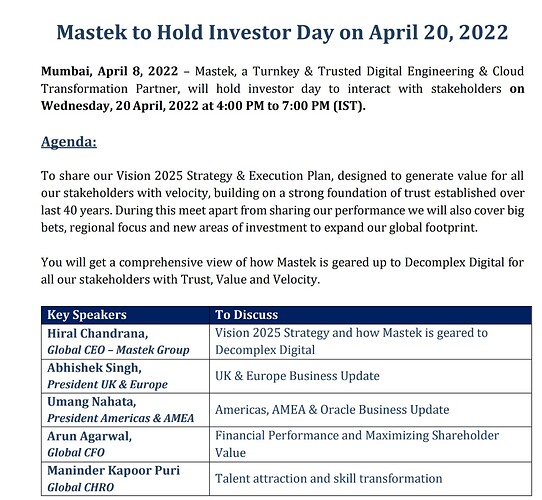 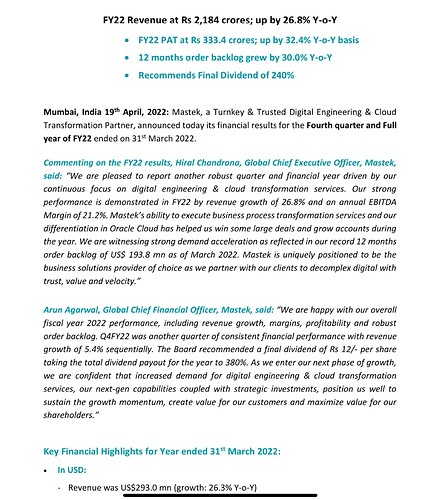 Decent numbers. Sequential growth of 5.4% is a bit lower than market expectation (7-10%) but in the current scenario looking at other companies’ numbers, it is satisfactory. A small dip in EBITDA which is ok for me. Revenue growth in the USA market is still to catch but decent orders won in that region. Looking forward to Concall and investor’s day presentation to understand the future direction. Disclosure: Invested and may add more in dips.

investor presentation is in the results file itself. Link attached above.

Edit : Investor’s day presentation may be different. The link has investor ppt for Dec 21 result.

Not so good parts

Whole sector is under stress on margins, some derating, Mastek seems fairly valued.

At this point UK is holding the fort but that biz alone can’t drive re rating being Govt orders driven, US it is visible that they can’t win biz without diluting margins atleast for near term and there too low base may only help to some exteng

CEO Hiral has been on-board for 2 Qtr+ now, given UK biz is self sustained and has local leadership, if we were to look at US geo - nothing exciting in numbers or newsflow. If UK margins ( currently near 30% below image, FY 21 was below 25%) were to normalize to mean levels, risk on margins visible unless US is ready to do heavy lifting - no signs yet. Let’s see what mgmt commentary holds. 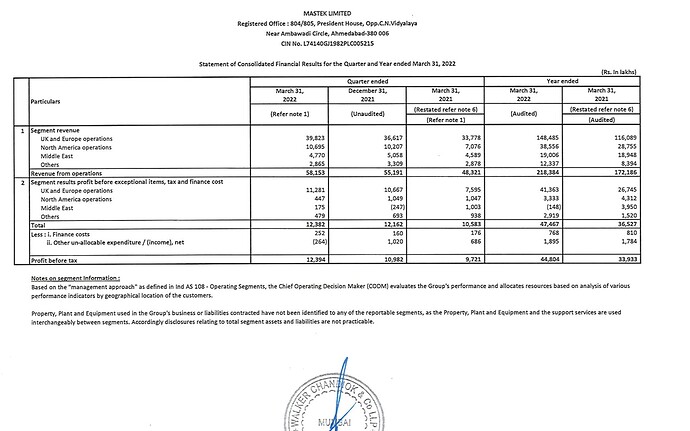 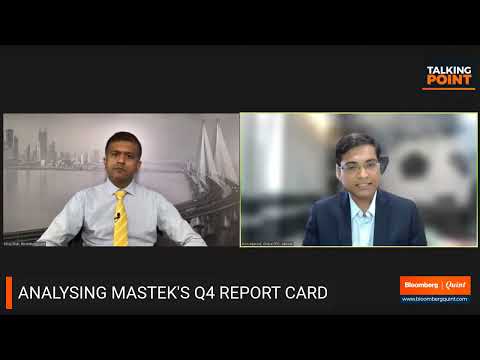 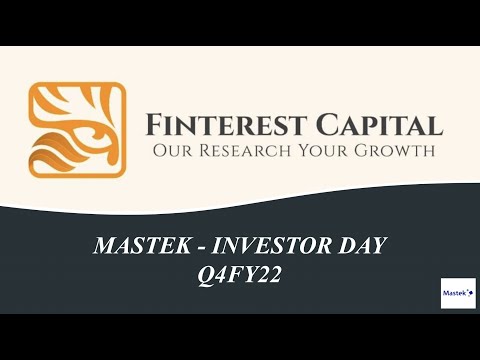 Above are back of envelope and could be off, mkt is valuing at 3X+ sales currently at 20%+ margins, 7500 cr+ sales aspirations does makes it attractive from possibilities perspective, however some delivery needs to happen on ex UK front.

$1B Aspirations by Fy 25-26, interesting that they have it mapped out to decimal points

This is not true. What they have guided is sometime in the 2nd half of decade. Said this multiple times including hiral & the lower rung leaders. The question of how 150 cr goes to 1000 is a valid one, but the time frame is a bit open ended which gives them more breathing room.

Not true on 2 counts. They referenced this in passing but essentially they build assets which allows services growth. Same asset is already being monetized across multiple projects (eg: fraud detection & prevention)

break up but couldn’t answer / didn’t have any deeper insights on how to get there besides organic+ inorganic, better to leave it in air for now

Not true. In fact the entire presentation has bucket full of details on strategy. We just need to be perceptive towards it imo.

Being on same side @sahil_vi :), we are here to make gains and good to have diverse opinions, happy to see if even parially what they said converts in execution, my only submission is aspirations need to meet numbers, ex UK must fire to make any of what they said to happen.

US GTM - 40 year old startup is what they referred themselves, intent is there but so is in most of companies, lets see if the can execute well on aspirations. Also products and platforms are not an easy path, one can look at HCL discount story - hope they stick to what they are good at and at best these are accelerators, tools, frameworks etc which they can monetize.

Have learned to take mgmt commentary with a pinch of salt, untill narrative meets number. But at the same time happy to give them few Qtrs to see how next few Qtrs story will unfold on ex UK front.

There is a reason they trade at discount to peers in mid IT, valuations being fair helps.

US GTM - 40 year old startup is what they referred themselv

US is growing at 34% CAGR. I rest my case for “US firing evidence”

The discount to peers is because market does not find a narrative to be excited about. Valuations & stories around them are stories we tell ourselves (stories can be powerful).
We can try & rationalize valuations differrential by backfitting narratives or we can try & do deeper research to understand sources of competitive advantages. I would prefer to do the second

Mastek has actually demonstrated better ability than any peer in scaling revenues. You can check last 3 or 5 year revenue CAGR for any IT peer.

One thing I will concede. Intellect Design arena has a better biz model than mastek, and i am perplexed why it trades at similar valuation to mastek.

At end of day, multiple is in market’s hands & i would not spend too much effort contemplating on it except ensuring i am not paying too exorbitant a price.

Execution has been there. & hopefully will be there in future too.

One thing I will concede. Intellect Design arena has a better biz model than mastek, and i am perplexed why it trades at similar valuation to mastek.

I know we are off topic here but IMHO, for every exciting offering by IDA, there is an equivalent product from other major IT players. For all established and discovered service/semi-product companies, revenue per employee is what eventually matters. Yes one could go wrong with such simplistic model but unless number show some inorganic growth, it’s mere packaging.

Unfortunately core enterprise “business” products require massive system integration and customisation. Huge chuck of money comes from there (people business) and not as much from the actual product licensing. Companies tend to bundle them as one.

This is unlike “technology” products like say Oracle DB, or Google APIgee, your corporate communication platforms (mail, chat etc. ) or 3-click installations.

As we go up on the value stack from plain technology platform to tailored software, the term “product” slowly start becoming an illusion.

Two important things (one negative and one positive) that I will track are: 1.) Execution risk due to the merger of Mastek and Evosys 2.) Elevation of Umang Nahata to drive US and Middle East businesses.

1.) Execution risk: There is a high post-merger execution risk. Evosys has been a truly agile company that has grown aggressively since it was founded in 2006. Whereas, Mastek seems to have a relatively laid-back culture if we simply compare the organic growth of Mastek and Evosys for FY19-21 (not a precise criterion but gives you a fair bit of idea). Merger of the two may result in slowed growth if Mastek’s work culture overshadows growth-hungry Evosys (in my opinion).

2.) Elevation of Umang Nahata: For me, Umang simply stood out as a leader among the rest during the investor’s day. Read about Evosys history… he has been instrumental in driving Evosys growth — built a c.800 cr. topline company (almost similar to Mastek at the time of acquisition) in just 14 years. So his track record is solid. I consider him heading the US and the Middle East as a good thing for the company.

May be due to uk inflation & recession, which may trigger sloth growth which may disrupt renewal & fresh business as well, so with attrition & margin pressure mkt is discounting it in advance,

Also, GBP has fallen from 103 to 94 against INR since June 2021. That’s a near 9% fall in exchange rate in 9 months. USD on the other hand has strengthened in the same period.

Good pointer. This seems to be a key point