In the 1940s, before Independence, Janakilal Agarwal (Grandfather in law of Mr. Ashish Saraf, idk if the term is correct and connecting the dots to relation based on what I have understood) used to work near Malkapur, a town in the Buldhana district, in the current state of Maharashtra. Every week he would return home with groundnut and other seeds for his wife. Come Monday, he would leave for work, while his wife ground the seeds to make oils and butter. Agarwal would carry these oils to Malkapur to sell and earn some extra money. Gradually, they employed more women.

After a few years, Janakilal went to London on a scholarship, where he completed a PhD in fat chemistry. He came back and expanded the seed-crushing business and spent most of his time in the laboratory experimenting. He discovered that oils from banana peels, mango kernels, and sal seeds could be used in chocolates. So he went to trade fairs in Japan and Germany to display his products.

He did not have money to afford a stall at these fairs, so he would display all the products on his body. This is how he met Michael Ferrero. He explained to Ferrero that if he used these products the chocolates will have better stability.

This business was taken at a global scale by Mr. Ashish Saraf, Mrs. Vinita Saraf and Kedarnath Agarwal by establishing Manorama Industries.

It was established in 2005 by Mr. Ashish Saraf, Mrs. Vinita Saraf and Kedarnath Agarwal (father of Vinita Saraf).
It specializes in extracting butter and fats from the seeds of Kokum, Sal, Mango, Shea. The end products are Mango based Cocoa Butter Equivalent (CBE), Sal Based CBE, Shea-based CBE and Mango, Sal, Shea based Specialty fats and butter.
Cocoa butter alternatives can improve the physical properties of the fat fraction in chocolate. There are three types of cocoa butter alternatives or speciality fats – cocoa butter equivalents (CBEs), cocoa butter substitutes (CBSs) and cocoa butter replacers (CBRs).

Cocoa Butter Equivalents (CBEs) are Manorama’s core product. CBEs behave like cocoa butter in all respects and are able to mix with cocoa butter in any proportion without altering the melting rheological and processing characteristics of cocoa butter. The principle advantages of incorporating CBEs are the reduction in production costs as CBEs are cheaper than cocoa butter. CBEs also offer improved milk fat tolerance and improved stability of chocolates in tropical climates.

Sal, Mango, Kokum is domestically procured. They get It from the belts of Chattisgarh, Orissa, Jharkhand, Maharashtra. India has the largest sal forest in the world, with 16 percent of its total land covered by it.

Shea nuts are collected from West African regions like Burkina Faso, Ivory Coast, Togo, Benin, Mali, Ghana and Nigeria. Procurement season is November, December, January and February.
Ghanaian kernels, for example, are considered the best compared with others. Their kernels have consistently lower free fatty acid levels and higher oil content and are less contaminated by moisture, charcoal from smoke fires and impurities. They are expensive vs the Sal seeds in India.

Global CBE demand is currently nearly 180,000 tonnes of which 90,000 tonnes is stearine, which is made from processes predominantly undergone by shea nuts and sal seeds. Currently, Manorama Industries is among the top 10 manufacturers of sal oils and stearine.

They manufacture the product at their Birkoni Plant, Chattisgarh (image below ) :

They recently raised 100 crores through QIP for their next leg of brownfield expansion.

Their current capacity is 15000 tonnes which is likely to expand to 40,000 tonnes in H2FY23. They are also building in-house storage capacity for oils, warehousing for seeds and in-house solvent extraction capabilities.

What they exactly do:

They procure seeds from the wild forests and have created a procurement chain for the past 15 years with more than 18000-20000 centers where the seeds are deposited by the tribal.

By becoming a supplier of raw materials to Manorama, the forest dwellers (mainly comprising Women suppliers) have been able to earn a decent livelihood and become economically empowered.

The seeds go through the process of crushing and the oil is extracted. The end products are very unique to customer since these are jointly developed with the client as per the specifications. It gives taste, texture, stability and shelf life to product.

What is the strength of Manorama ?

They boast a rich clientele, and this clientele is in itself a flywheel to tap other Global MNCs. They have clientele such as Body shop, Ferrero Rocher, Mondelez (5 star), Loreal (Garnier), Mitsui, Unigra, Olvea vegetable oils, Walter Rau, Activon.

Also, they have worldwide certifications to tap any country and clientele.

They also have roped Dr. Krishnadath Bhaggan from BLC (Global competitor) who has 70 patents in his name. He looks after the R&D and has 25 years of experience in Fat chemistry.

Who is the opportunity size for the industry?

The opportunity is huge considering the switch from Cocoa to CBE due to its price, efficacy.

Cocoa butter accounts for around 20% of chocolate by volume but 80% of the value, Manorama says. If 5% of cocoa butter is replaced by a cheaper equivalent, raw material costs will reduce significantly by 6-8%.

India approved the 5% use of cocoa butter equivalents based on sal, mango and kokum in chocolate in January 2018 and Manorama says it is confident that the government will increase this 5% limit, spurring further industry growth.

They have got applications in Foods, Cosmetics. As per my understanding, body shop has started the process of aggressively switching to vegan products which dont involve animals and hence this plant-based butter is a natural product for them.

Does Manorama have pricing power in these inflationary times?

For Global MNCs, the product is very crucial considering it gives taste, texture and stability to the product and hence price is never the criteria quality it. Since it is jointly developed very difficult to remove based on price hikes.

What is the competitive intensity ?

Monopoly in Sal and Mango.
Competition in Shea from Fugi Oil and BLC.

They have advantage considering they procure and make in India which definitely has some price advantage over Global players and hence a better price gives them an entry to break in the Global player’s customer profile.

How easy it for for a new company to enter this space?

Also, customer approval takes 1-2 years considering they can’t compromise on existing taste and hence need to approve the product before onboarding a player. They need a reliable player. Very difficult for a new player to break in.

What can be the anti Thesis for Manorama ?

Procurement is seasonal in summer and winter and they procure all at once for the year. All calamities, wildfire can disrupt their procurement and they can be left with no seeds for the rest of the year.
Inability to scale as per demand since I feel management is conservative and always builds capacity after 100% capacity utilisation.

Thanks Nikhil for good write up on MIL, was very helpful. I have tried to analyse and put some assumption on the business parameters of MIL, do let me know your views on it.

Why revenure decreased in fy2019 ?

From FY19 and onwards trading revenue is not included, in fact manufacturing revenue increased 67% from FY18 to FY19. 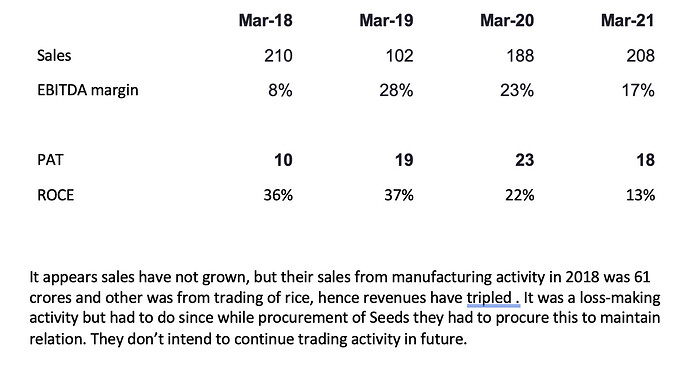 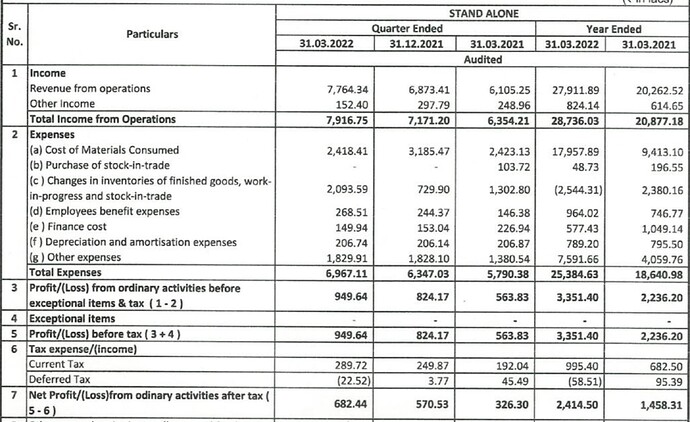