Will take his opinion with a bucket full of salt. He himself is invested in the likes of Lupin, Panacea, Snowman logistics etc. All these companies have had compliance issues (Lupin) or governance issues like (Snowman)

I did back of the envelope calculation on numbers based on Dr Chava’s guidance. (of course, many of us must have already done it)
$1B sales in FY23 translates to ~7500cr, while maintaining 30% OPM. Current topline on TTM basis is 5000cr. That’s 50% jump in topline in just 5 quarters. This translates to forward pe of ~16 in FY23.

Capable management, strong growth ahead. Laurus seems to be cheap if we look at the numbers. What is market seeing that I ain’t? Is market discounting too much of ARV uncertainty/degrowth?

The market is questioning the guidance of Dr. Chava right now. Given the mismatch in his statements in Q2FY22 vs Q2FY21 (regarding impact of inventory stock on sales figures), the market doesn’t seem so sure of growth projections anymore. In fact, it’s now a case of market not fully believing the management anymore. Of course, the market may be wrong but it is a bet that current investors are making against the market.

ARV uncertainty was always there, it’s just that it has got highlighted after recent Q2 commentary. The muted performance (although it happened across the industry) has exacerbated the matters further.

The current phase may get worse or improve depending on management performance. As I see it, if Laurus achieves $1B revenue by FY23, we are in for a multi-bagger, but if the management doesn’t walk the talk, the downhill road is equally steep.

@Worldlywiseinvestors - What is your view on present laurus situation and management? Would love to read about what’s on your mind presently. 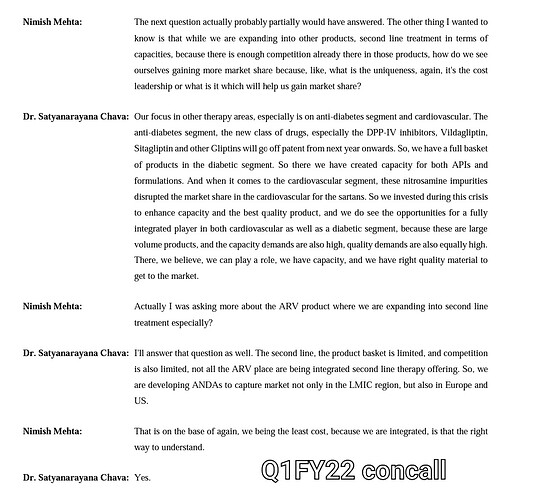 To be a little precise think roughly if you go through last 4 quarters only retailers have reduced
their stake as they are sceptical about the
future …Respected, but on contrary fiis n diis have increased their stake… Showing more faith in the future,

Including LIC buying roughly 2.18% stake which gives atleast me personally lots of comfort as they are one of the shrewdest long term investors known for picking up quality stocks at the right price, their record is pretty good. Feel fundamentals of Laurus are much better now than when it was at 700+

As far as 1b sales are concerned he has repeatedly said it’s an ASPERATIONAL internal TARGET depending upon approvals which they are very positive, they might reach , might not but what i want to highlight here is how they are trying n what steps they are taking, personally not waiting for it, trying to see much beyond fy23 when Bio, Crams, other Fdf,API will become much much bigger , there will be steady growth as evident from advances they are making in fields of Oncology, cardiovascular, Diabetes, Bio, Crams, immuno plus any other new investments from cash flows…

so far i am very satisfied by their actions looking at their past record being proactive rather than being reactive,
also some part of their Targets will also be compensated by Sales from Molnupiravir n hopefully from paxlovid which have Their own demand in Lmic countries where Laurus has good relations. Also any new better Antiviral which may be developed in future Laurus can play it’s role.

The old saying…shoot for the moon and even if you miss you will still be among the stars…
i don’t judge by the stock price much but surely keep a hawks eye on fundamentals and by mid fy 23 most things will be clear… And will surely change my mind if fundamentals change, minor hiccups here and there will always be there, businesses hardly operate in a no surprise environment, have to check major cracks in fundamentals if any

Personally I feel and can be totally wrong within 3 years only bio will command the price at which it is quoting today forget other fields.
But am optimistic they might reach close to their goals… If you try and read more about these three gentleman…Dr Chava,Subu(bio), Rahul Purwar… Their Combination will hopefully create some Magic in future … Plus the others who will board this bus,

yes would surely love to know what Mr WorldwiseInvestor thinks will be a great value addition. Can be wrong in my thesis invested so biased Thanks take care stay safe

Management has mislead investors over the last 1.5 years with their bullish commentary and not agreeing an year back that the sales bump up was due to stocking up of ARV (the whole thing is reversing now).

Post 2QFY22 the company had said 3QFY22 will be similar to 2QFY22. Clearly once again they have mislead investors.

To sum up , an iffy result with some good parts and the not so good being the sharp decline in revenue and leaves more questions to be answered by the management . T

Plugging in one of my earlier comments. So the jump was due to stocking? I have missed a lot of things in this thread now.

Laurus Labs - Can Business Transform to Next Level? Stock Opportunities

I want some opinion on one particular question that was asked to Dr. Chava in multiple interview (including concal). “How much of current profit surge can be attributed to covid?” The answer Dr. Chava gave was that it is irrespective of covid. In the concal, he also went on to say something more. He said that prescriptions are advanced now. Instead of giving prescriptions say for duration in weeks, prescriptions are being given for longer duration to avoid frequent doctor visit. but still the …

Disclosure:
I exited 80% of my position around 550-650 due to technical charts not looking good.

Again getting back to FY20 territory.

Perception swings around business performance are much wilder when Business is lumpy.

Short & fast strides in 1-2 years, temporary halt for 4-6 Quarters before the next sprint starts. An investor has to decide whether they are willing to stick with the journey throughout or play around the sprints. Nothing wrong in both the viewpoints.

Cdmo growth is stellar though, Arv as expected is going through headwinds

One pointer to validate mgmt stand on future ARV supply

Here is the list per final bids received- Laurus isn’t there. 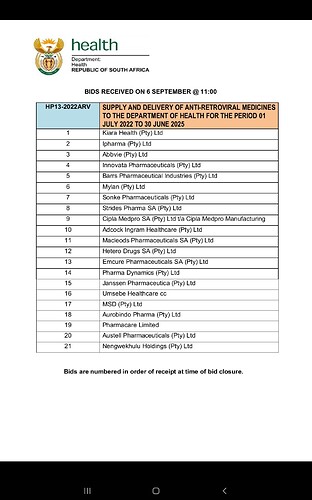 As they say one should look for downside and thesis should take care of growth. If ARV revenues stabilizes, then Laurus have enough levers for future growth from mainly from FDF, non-ARV APIs and Synthesis.

A quick research in quest of following the funding money for ARV - led to this presentation from Oct 20 from global fund.

Following on from @Dev_S’s brilliant find, I noticed that the presentation is from an annual ARV buyers/sellers summit. I found an updated deck for the summit held in October 2021, with forecasts for 2022 and 2023: 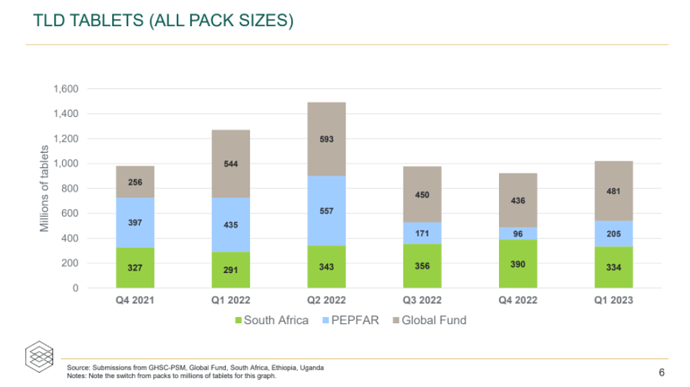 From this, it looks like Q4FY22 and Q1FY23 should see growth, but these are exceptional quarters, and demand becomes muted from Q2FY23 onwards.

The breakdown shows us that South Africa is more important to the TLD market than the Global Fund:

Q1FY23 will have an exceptionally high order of the 90 day regimen:

This should be treated as the base case, with estimates having a possible upside revision.

Finally, there’s no hiding from the reality that @Dr.Midhun has highlighted: 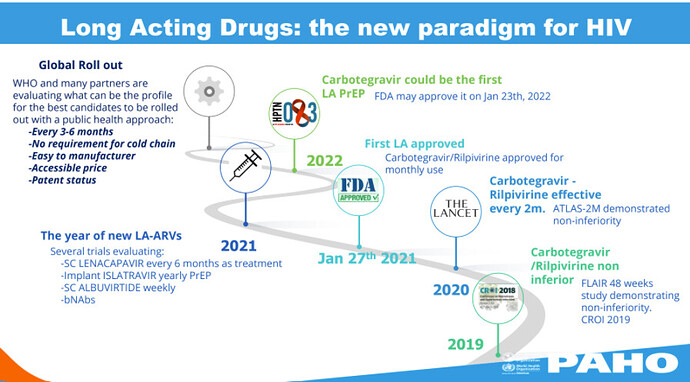 I can’t attach the full deck due to size limitations, but it’s available at this link:

Results aren’t stellar because business is going through its transitionary phase. Gross margin and EBITDA margin were maintained. As per its plans, Q1 and Q2FY23 are much more decisive quarters to look at

API’s degrowth. while expected, was a bit of a shock. FDF, still not yet worried since I am hoping to get more information on the MPP/Molnupiravir deal. Add to that, capacity expansion of 10bn tablets is around the corner. CDMO results were great. It seems that this part of the business will need to be analyzed on YoY basis rather than QoQ. LSPL’s Unit 2,3,4 have yet to commercialized. Bio is still in nascent stage and results show likewise. Q4 will be very interesting for Bio since they v recently fully commissioned their 180kL facility.

Will money be transferred from impatient to patient hands in near future? Let’s see.

Results aren’t stellar because business is going through its transitionary phase. Gross margin and EBITDA margin were maintained. As per its plans, Q1 and Q2FY23 are much more decisive quarters to look at

Is management ignoring the threat of long acting ARV injectables? Their comment in the presentation seems dismissive to me. 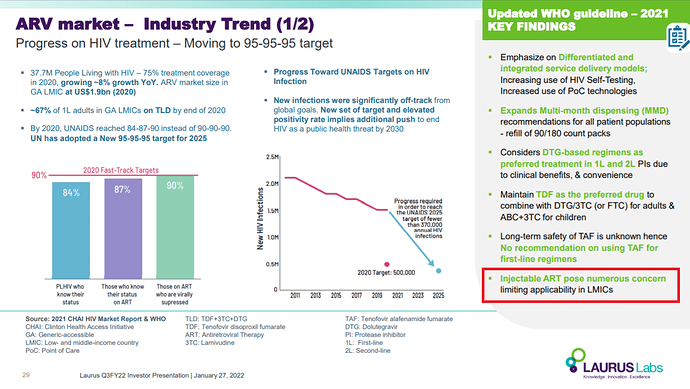 in their Q2 Concall, Dr. Chava mentioned that Laurus is looking into injectables. As per my understanding, there seems to be a case against injectables with regards to its economic viability in LMIC countries. I might be wrong but will have to check management’s response about this in the upcoming Concall. Thanks for pointing this out!

As someone who has domain expertise in this matter, do you think Dr. Chava’s comments of WHO guidelines being adjusted no earlier than 2025 is realistic

Management guidance on the latest investor presentation says there will be no change in treatment regimen until 2025. 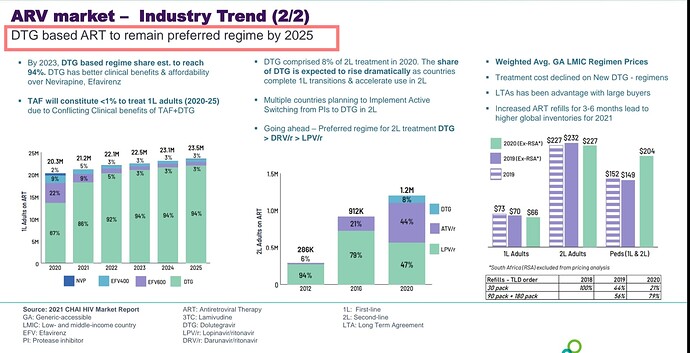 For the first time, investor presentation also points the threat of long acting injectables. But there is not much data on the presentation about it. 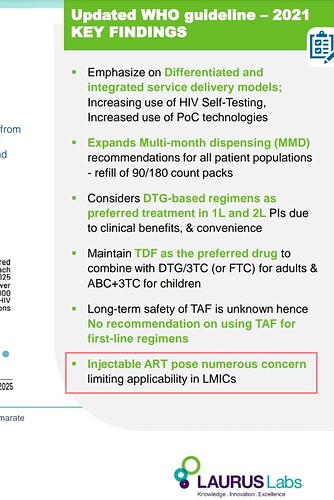 Thanks @Dev_S for your research. 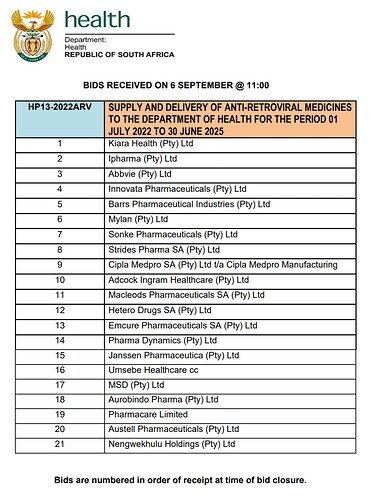 South Africa tender also indicates there may not be any change in regimen until 2025.

But Laurus’s name is not there on that tender. That looks surprising to me.

This announcement by Laurus in 2019 seems to be indicate that - https://www.lauruslabs.com/Investors/PDF/Disclosures/LaurusLabsDisclosureReg30AcquisitionofForeignentityinSouthAfrica.pdf

This announcement by Laurus in 2019 seems to be indicate that - 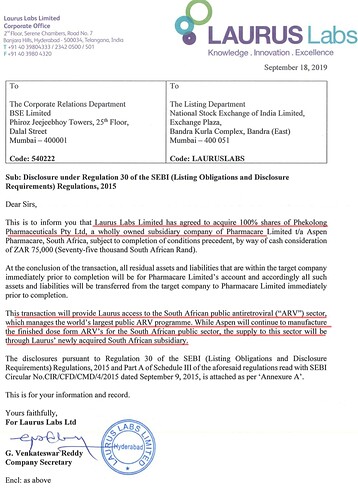 Thanks @nirvana_laha.
That explains it.

Does it make sense to invest in injectable if target to have less than .5 M new cases post 2025?