Kopran Ltd. is a pharmaceutical company operating both in Formulations as well as API’s. The formulations are manufactured at its plant in Khapoli & API’s are manufactured under its subsidiary Kopran Research Laboratories Ltd at its plant in Mahad. Together on a consolidated basis the Co. has been doing Sales of about 300-400 crs over the last 4-5 years with Profits of around 20 crs in the same period. 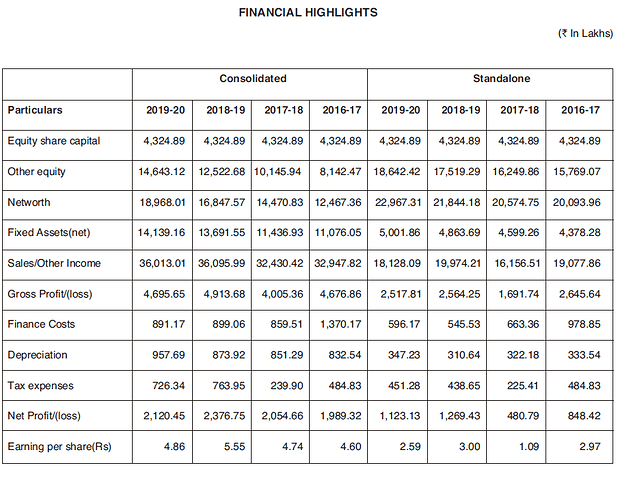 image923×731 60.4 KB
On the face of it, nothing very exciting, but taking a closer look at the numbers over the last few quarters suggest that things may be changing here.

The June quarter results brought the Co. into the limelight with a jump in both Sales & profitability at 120.88 Crs & 14.23 Crs. respectively.

The March qtr numbers were pretty good too, if one factored in the notional forex loss of 5.5 Crs in the qtr. The Co. could easily do a PAT of about 45 Crs, net of forex gains / loss with cash profits of about 55 Crs. for the year. The current market cap of the Co. is about 392 Crs.

Numbers aside, with recent tensions with China, the Govt. has decided to give a huge thrust to the pharma sector to reduce our dependence from Chinese imports of APIs. It has announced investments of Rs. 10,000 Crs to incentivize the production of APIs in India. Discussions are on about making this even more attractive to encourage pharma companies looking to relocate from China to set up shop in India.

There has been a lot happening within the Co. over the last few quarters. The Co.’s API facility at Mahad was inspected by USFDA in January 2019 without any observation under Para 483. The Co. had filed the DMF of Atenolol which has been approved by USFDA & the Co. is in the process of commencing supplies of the API Atenolol to the US in the current year.

The Co. has also received the approval of Pragabalin from EU-GMP & will be able to market the API in Europe. Further it has filed for USFDA approval for Pregabalin & Azithromycin.

The Co. is gearing up production of both APIs & formulations & expanding its portfolio. The API plant in Panoli in Gujarat which the Co. was trying to acquire got delayed by a year, has finally come about & will give a further fillip to the scaling up of API business.

It is also reliably learnt that the Co. is in advanced stage of closing a couple of deals for contract manufacturing. Mgt has been paring down debt (about 77 Crs as on March 31, 2020) over the last few months. This will further improve the ROCE which based on the current year’s performance would be in the range of about 24% for 20-21.

Concerns: Kopran has been around for as long as I can remember, & has not done anything to write home about in all these years, so could this be a false alarm? Though in all fairness, the Somani family which are the promoters, have been having their own family restructuring & with the ownership issues now settled, the focus can shift back to the business of running the Co.!

Margins will be Key thing to watch as it has been very volatile in last couple of years.

While there is no denying that Covid 19 has given a boost to volumes of many Pharma Co.'s, the Kopran story is more a result of approvals already received / in the process of receiving from EU GMP / USFDA. I expect a steady growth in Sales & Profits for the next few years & to my mind Q1 is not an aberration, but the start of growth phase for the Co.

There website is pretty exhaustive & one could get a lot of info of both the formulation as well as the API business.

Ratings upgrade by CRISIL for the Co. & its subsidiary Kopran Life Sciences Ltd. for long term bank facilities from Stable to Positive. Further sign of better times ahead for the Co. It also confirms that the acquisition of the API plant at Panoli that saw a delay of about a year has finally come about & should help in scaling up operations.

Reports from rating agencies perhaps give greater insights on the Co.'s working then assessments made by the Co.'s themselves as these are independently carried out. They give a proper rationale for any change in the ratings. They also tend to be more conservative in nature.

Kopran continues to scale new highs. I believe it has broken out & is now trading at a 20 year high!

Meanwhile the Co. is fast coming to terms with modern retail & is aggressively reaching out to customers online.

The rating agency reaffirmed its 'CRISIL BBB' rating on long term bank facilities, while short term ratings has been reaffirmed at 'CRISIL A3+'

Kopran seems to be on a tare in these last few weeks, having gone up by about 25% with huge volumes in the 10 odd trading sessions since this thread was initiated. (Not suggesting that this thread is in any way responsible!)

There is a lot happening here. Where India is lagging behind are “Intermediates” , which have largely been imported from China. Intermediates go into the making of API’s & there is a huge export opportunity here as they require fewer approvals. The new plant at Panoli will be focusing on Intermediates. Kopran is also largely backward integrated, in that it makes Intermediates / API’s for many of its formulations.

The best part is that there is still a sense of disbelief in the Co. Some consider it a Bull market stock, the fact that it is at a twenty year high (a period that has seen many a bull market!) notwithstanding. The current numbers are a result of work carried out over the last 2-3 years. No wonder pharma Co.'s command a higher multiple. The September qtr results are expected to be good & the stock certainly looks good to see higher levels.

Kopran weekly chart showing a multi year breakout referred to by @RajeevJ Today it closed at 5% upper circuit of 113.

Kopran to consider interim dividend along with the Q2 numbers.

Hi Rajeev, was going through past ARs of Kopran and KRLL. Few observations -

Kopran came out with a very decent set of Q2 numbers. Sales at 118.99 Crs is higher by 36% over corresponding Q2 Sales of 87.78 Crs. PAT at 16.63 Crs as opposed to 5.53 Crs. The other notable feature is the debt reduction of 15 crs. despite the ongoing expansion. The RoCE for the current year should be a healthy 25% which would only improve going forward. The Co. could do Sales & Profits of about 480 Crs & 50 Crs for the current year, net of any forex gains, which are notional & could go either way. Even after the recent run up the stock is still available at a multiple of around 11 times, which given the growth prospects is very reasonable. The icing on the cake is the unexpected interim dividend of Rs. 1.50/- per share which signifies the mgt. bullishness about the future.

What the results clearly establish is that the spike in Sales in Q1 was not a one off, but is the new normal with improved operating margins. These margins are expected to further improve with increased Sales bringing in operating leverage as we go forward with the Co. in the process of almost doubling its capacity of its API facility at Mahad. The new plant at Panoli should also go on stream in about 9 -12 months & we could conservatively see Sales more than double from the last year’s (2019-20) level of 360 Crs. in a couple of years. The margin improvement will get further momentum with the focus shifting to increasing exports to the regulated markets (EU & US) for which the approvals have been recd. / in the process of receiving.

There is a strong buzz that some very strong hands are in the accumulating mode & it will be a real pity if the retail were to get out now after holding for all these years, just when the good times are finally around!

While at a fundamental as well as technical level, Kopran looks great to enter, do you have any idea about the integrity of the promoter group (Parijat)? Seems the company got involved in the Ketan Parekh scam, although things would have changed now.

Also request if you can address the points raised by @anupnarayan

I have given my investment thesis based on which I have invested but I am afraid I do not have answers to the queries raised by you. While it would certainly help to get the answers, sometimes in the case of small caps, info is scarce & by the time we get the answers, its may already have been a bit late. But yes, if unanswered questions raises too many red flags taking the investment outside ones comfort zone, then it certainly makes sense to seek answers before investing & just track the story. Its more of a personal investment strategy.

I was just checking some results on the BSE site and this dropped in. Very good details about the product pipeline:

The Investor Presentation given by the Co. gives details on the various molecules in the pipeline. It would indeed be of immense help if the Pharma experts on Valuepickr can come forward & help in better understanding the growth potential of the different molecules & in light of the info given in the Presentation, how do they see the growth of the Co. over the next 12-18 months. 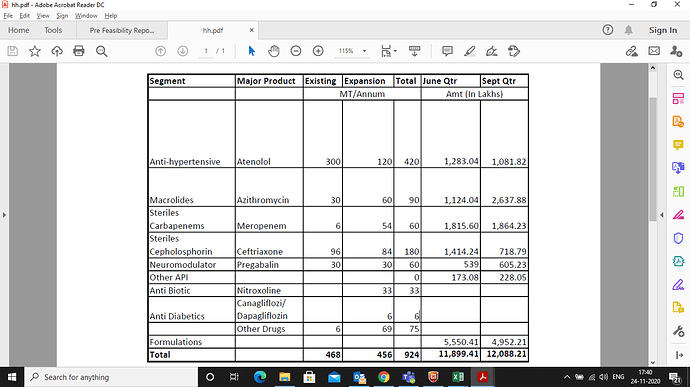 Expansion is under Environmental clearance(EC) procedure and had sent for clearance by company in August 2020.
Once EC is received, expansion will commence and it will be completed within 1 year.

Atenolol
Received US FDA approval for its Anti-hypertensive Drug Atenolol
Plans to capture major share of the US Atenolol market in the next two years. To achieve this feat, the Company is actively engaged with major players in the US for supply agreements for4 products for which DMFs have been filed with USFDA.
https://primefeed.in/coronavirus/3528087/atenolol-market-trends-share-growth-rate-opportunities-and-market-forecast-to-2023/

Azithromycin under Macrolides
During the pandemic, COVID-19, Company is manufacturing Azithromycin, an anti-biotic used for its treatment. Addition of new products is to sustain the market competition.

The benefit of Atenolol US FDA has not been reflecting in the quarterly numbers yet and will have to wait for coming quarters.
The major driver for growth in recent quarters sales and margins seems to be Azithromycin.

India Azithromycin Market to grow at a steady rate During the Forecast Period...

Thanks for sharing , Article doesnt quote Kopran as a key player yet, given Azithromycn doing the heavy lifting in Kopran performance in recent quarter, this demand should help sustain performance to some extent. Competition exists so doesnt look like supply will be issue, below writeup in article…

I am going through past years AR. I am not able to find

It looks like their main market is Africa and South Africa. And now they are targeting US and Europe.