Kama Holdings is the holding company for SRF Limited. Market capitalization for Kama Holdings is '840 crore. Kama owns 52% of the share count of SRF, or 30 million shares. At current valuations, this holding amounts to '3,900 crore, indicating a discount of 80% to the value of just SRF held.

SRF paid a dividend of '10 per share in FY15, implying a net inflow of '30 crore for Kama Holdings as dividends for the year. Kama’s investment on books into SRF stands at '404 crore. Kama increased its holding in SRF by 1 million shares from 29 million as of end-FY13. This is a positive indicator of financial health through an open market buyback. It is instructive to note that this was done at an average price of approximately '162/share, a very good acquisitive price. Today, SRF is worth '7,400 crore or '1,275 per share.

As my friend and passionate value investor, Krishnaraj V (fondly known as Kimi) puts it: “A company should be known by the companies it keeps”. So, is SRF a good underlying investment? Let’s delve briefly into SRF.

SRF enjoys a global leadership position in its technical textiles business. It is a domestic leader in various other business lines such as refrigerants, engineering plastics, industrial yarns, polyester films and fluorospecialities, In FY15, SRF earned its revenues at an operating margin exceeding 25% on its consolidated business, after two years of sub-optimal margin performance. Note that this was despite strikes and inventory write-downs. Returns on average Net Worth stood at 13%, while pre-tax ROCE stood at 11%. Working capital requirements remain high for SRF thereby depressing capital returns during its growth phase. Debt to Equity (D/E) ratio stands at 1.0x. The promoters are known to be able and honest in their dealings, and have interests aligned with that of the company (through a cumulative 75% stake in the firm, inclusive of that held by Kama). While we should not expect more rapid growth in revenues, better operating margins through lower input costs, should enable profitability to increase faster than topline.

Per SRF’s FY14-15 Annual Report, Amansa Capital, a fund run by noted value investor Akash Prakash, started buying into SRF in May-2014 and now owns 5% (or 2.9 million shares) as of June-2015. Akash Prakash has the uncanny ability to buy undervalued businesses which blossom over a 3-5 year horizon, producing extraordinary long term gains. Examples include Eicher Motors, Ashok Leyland, Whirlpool, among others. The list of investors is long and noteworthy. A glance through the Annual Report or Company Shareholding Pattern would disclose further details.

There seem to be two possibilities:

In any case, the probability of the discount deepening further seems less likely than its narrowing, creating a substantial margin of safety.

Disclosure: I do not own shares in SRF Limited or Kama Holdings Limited

Thanks for the idea - the way one should look at holding companies is through a dividend discount model. If Rs. 30 Cr. is the dividend this year, extrapolate it for sy 15 years and then take a steady dividend post and discount it.

At 27 x current dividends, it seems fairly valued. A point to note is that these holding companies are like “permafrost” - a minority shareholder typically waits for a glacier to melt so that he can drink some water. If the glacier is never going to melt, it might be “waiting for godot” - I learnt it the hard way,

One thumb rule I use is to not pay more than 15-17 x dividend inflows. Much, in this case, will depend on SRF’ ability to generate free cash flows and hence increase dividend - one must remeber that SRF is a cyclical business and if you look at 10 year track record of creating FCF’s its not much - the business waxes and wanes in 3-4 year cycles. You may be better off playing SRF and getting out at the end of the crest here.

Just my thoughts - I’ve paid substantial tuition fees in teh past to learn this lesson.

Find enclosed my reply on SRF Post on valuepickr

Just adding more twist to tell. In case you like SRF, it would be better idea to invest in SRF through Kama Holding Limited (earstwhile SRF Poly). The promoter's majority holding in SRF is held through Kama Holding. For each share of Kama, one would get 4.65 share of SRF, with price of almost one share of SRF. While I appreciate holding company discount would always remain, I am positive for following reasons: 1) SRF 10 Dividend result in Rs 46.5 dividend being received by Kama. Kama last year p…

Discl: Holding SRF and Kama Holding and investors are advised to do their own due diligence.

While I agree with your viewpoint broadly, In case of Kama there is one difference.

As SRF share prices increased, management stopped purchasing share from open market of SRF and they hand over dividend to Kama Holding. Kama Dividend payment has increased from Rs 2.5 per share in FY14 to Rs 20 per share in FY15.
http://www.moneycontrol.com/company-facts/kamaholdings/dividends/SRF03#SRF03

I had also suffered in holdco in past. But the lesson learnt by me and which applies to Kama are as under:

What I see, when SRF is expensive, the management would have been left with no option to give dividend. So as against Rs 10 per share dividend in SRF, Kama gets 46.5 Dividend per share. IF same get distributed to shareholder (as we see from FY15 dividend distribution trends), the price discount to Kama and SRF should decline due to arbitrage opportunity of dividend. Currently, both SRF and Kama are almost trading at same price. The increased dividend payment in Kama, if only one time exception in FY15, then my logic would defy and discount rate would continue same/ or may increase.

I have also invested in Bajaj Holding, Bengal Assam/ Florence (JK Group Hodlco), Kalayani Investment (Bharat Forge Holdco). Did not made any profit in above as the above mentioned parameters were not fulfilled.

Please let me know your view

Discl: My view may be biased as holding share in the company.

Nice - I learnt a new perspective from you. Thanks for that
what matters is not absolute dividend but dividend relative to the price you pay - for a Rs. 1300 price, you are only getting Rs. 45 - that’s about 1.5 % dividend yield.
It seems to me that you are extrapolating this dividend to grow linearly which is unlikely to be the case as SRF is a cylical business.that’s my point - if it waxes and wanes, your returns will come down substantially. If in doub,t look at dividends over the years - very erratic.

your thesis would be bolt on if this was a dabur or emami - thanks much - did learn something.

Point on cyclicality is well taken. Whether SRF is overvalued or not, may be another question altogether. The point I am making is both SRF and Kama Holding are trading at Rs 1300. SRF give dividend of Rs 10 per share. Kama (just because being holding company of SRF) would get dividend of Rs 46.5. Of these Rs 46.5, let us assume that decide to distribute 50% as dividend (around 23.25 actual being 20 per share).

So other thing being same, with almost 80% holdco discount (hence scope for increase is possible, but very limited chance because factor highlighted in previous post), would give almost double dividend yield as compared with SRF. Since there is no other business of Kama, its fortune are completely linked to SRF (which is not case in other listed holdco). Hence, I feel that there is arbitrage between SRF and Kama.

However, my understanding is correct or not, would be confirm only in time. Having said that, cyclical nature of SRF and current run up in price, I take your position. My limited submission is that if someone find SRF attractive, it is better to enter through Kama Holding.

One observation on management quality.
When SRF price was hovering around 300 company was doing buyback.
In 2013 when price came under pressure and it was trading around 150 ( with a quick dash to
126 and back) promoters were buying.

@typebharat, Point well taken. But to be fair, what do you expect once Kama Holding exhausted funds utilised? The more crucial point to Cumulative redeemable preference share of double the amount of equity capital carrying 8% Preference over dividend payable on or before March 2031. These preference share were issued in amalgamation of various company in 2010 by Kama Holding to promoters and I could not find whether this was at arms length or not. On positive side, they are not convertible.

It seems like the Kama Holdings value has been creeping up steadily. Yesterday it showed a huge spike.
There was a huge 20:1 differential in Bid vs On Offer. It seems like a safe scrip to protect wealth due to the discount.

I also have a feeling owing to new Dividend Distribution Tax regime. It makes it slightly more expensive for promoters to get paid via Holding companies!

Does anyone have thoughts on the K2 Family trust increasing their shareholding to 14.51% of Kama Holdings?
(http://corporates.bseindia.com/xml-data/corpfiling/AttachHis/D43DAD9B_4DDB_41CE_8CD7_A07C60824F2A_103905.pdf) This effectively means that it makes it easier for the Bharat Ram’s to de-list Kama Holdings? How do we protect the 10% of remaining shareholder’s interests.

Thanks and Regards, Greg.

Sir, do you still hold Kama?

Yes. I do hold very tiny position in Kama Holding which I purchased in Feb 2020 after existing initial holding. I am positive about SRF prospect and hence investing in Kama Holding which has future linked directly to SRF. Discount in valuation would fluctuate over a period, but still in long term it may provide better return than SRF in my view.

Find enclosed my working of Kama holding and SRF price and discount on same. I have assume, Kama holds 4.65 shares of SRF per share of Kama to calculate discount of Kama price to NAV.

Since July 2002, average discount to monthly NAV for Kama holding is 71% with median being 72%.

I‘ll start studying about the company.

Edit - Thanks for the file.
Wow, didn’t know the holding company discount narrowed lowest to 34%. Any specific reason?
Although the median does appear to be around 70%, in the last couple of years, the median does close around 55-60%.
On the other hand, the highest discount seems to be 80%, in 2015.

Ceteris paribus, I think the CMP offers a decent amount of margin of safety.

Varinder Bansal covered this stock in July 2015. He was in CNBC at that time.
Stock has not seen same discount again.

Disc - Have been adding Kama Holdings since last couple of months. 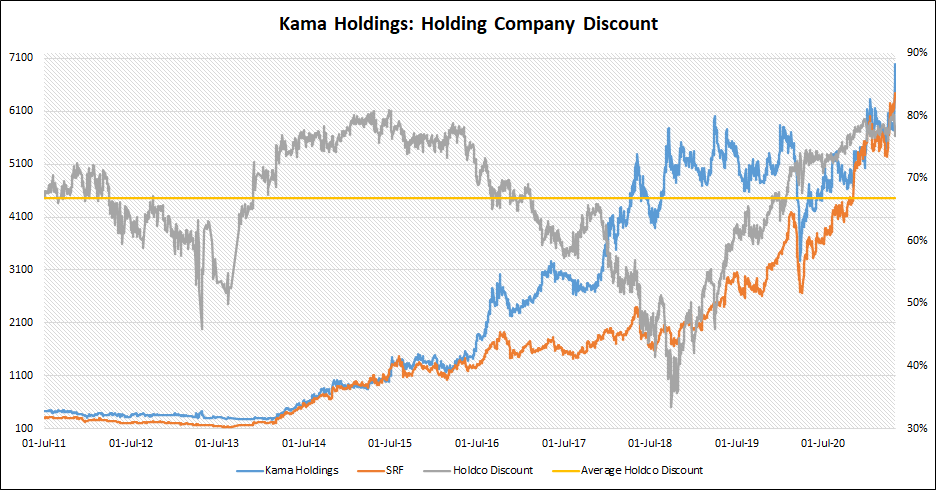 Good work done & thanks for sharing. I mapped last 6 years discount & reached same conclusion that current discount is on max slide.
Could you decode why discount was min. in mid 2018 ?
Normally discount is low during bull run, while bull run in mid caps was over in Q1’18

Current HoldCo discount of Kama over SRF is 80%
This is highest ever after June 2015. With traction towards SRF, next Kama could be in line.
Another trigger could be bonus in Kama as well (as in SRF last year)