The company has been increasing capacity over the years. An EBIDTA of 55 cr makes it pretty interesting in times to come.

Worth a look will dig deeper. Anyone tracking the company ?

what does the company do?

However, something didn’t seem working and all and I got out somewhere in midway. In hindsight, I was lucky to have got out as despite so many years, the stock is probably at the same price.

I think we must use such stocks as a case study to understand the reason behind the under-performance. Had a quick glance at nos and I think it may be due to frequent equity structure changes?

@Hitesh: The company is into sort of power cable compounds and such plastic materials (If I remember right)

PS: Haven’t tracked the stock in recent times and it may be throwing some opportunity.

I came across this on one of my screens couple of weeks back.

One thing which stood out for me was that the market cap (270 cr) was less than the Cumulative FCF over last 3 years (304 cr.)

There has also been deleveraging with reducing debt levels as captured in the above Cash Flow statement and below balance sheet.

I intend to capture my findings over the next couple of posts. There is a lot to cover and tl;dr version is as below:

About the Company
KIL, incorporated in 1985, was promoted by Late D.C. Surana and Mr. Narrindra Suranna, son of Shri D. C. Surana, in Kolkata. In 1985, the company established a unit in Daman for the manufacture of poly vinyl chloride (PVC) compounds. Sustained expansion over the next decades has resulted in diverse product portfolio consisting of PE compounds, PVC compounds, master batches, engineering plastics, reprocessed compounds. The company has seven manufacturing plants situated in West Bengal, Daman & Diu, Dadra & Nagar Haveli and Noida with an aggregate installed capacity of 2,96,700 MTPA.

The largest amongst this is PE compounds (comprising 54% of sales) with strong market leadership in sub segments such as Sioplas (market share of 50%), XLPE (market share 33%) and Semicon (market share 25%).

KIL’s top clientele comprises established players in the domestic cable industry along with export presence in more than 24 countries. CARE observes that KIL’s top clientele is well-established with repeat business accruing from such clientele (more than 80% of turnover is generated from repeat customers). While the low customer concentration is likely to insulate the company’s revenues against loss of customer(s), established relationships with renowned clientele is expected to provide stability to revenues and drive business going forward. Further, the wide spread customer segment base such as cable, footwear, white goods, pipe and packaging industry mitigates the impact of any industry-specific downturn on its revenues

The company earns around 15% of its revenue from exports to more than 24 countries, which are LC backed with majority of the payments having tenure of 60-90 days. Further, the company also imports its raw material requirements from Middle East, Japan, Malaysia, Indonesia, Thailand etc. on similar payment mechanism i.e. LC backed with majority of the payments also having tenure of 60-90 days. However the imports hold a bigger pie as 30-40% of the raw material requirement is imported; providing natural hedging to an extent. The company also regularly hedge its forex exposure, however, the timing difference between payment and export proceeds, exposes the company to volatility in foreign exchange.

The major raw materials required are PVC resin, LLDPE and LDPE contributing to almost 65% of total raw material cost. The price of LLDPE/LDPE and PVC are linked to crude oil prices which are volatile in nature. The operating profitability of the company has been lower in the range of 4-4.5% during the last three years.

The company has manufacturing facilities in West Bengal, Daman and Silvassa which are on east and west coast of India. Strategic locations of its plants provide logistical advantages for imports of raw materials as well as exports. Proximity to suppliers and ports also benefits to keep tight control over its inventory management marked by inventory days of 20-40 over last 8 years. Volatility in raw material prices (crude oil derivatives) impact operating profitability in this industry. The discipline in the inventory management has helped company to protect from vagaries of volatility in raw material prices, mainly crude derivatives and sustain its operating profitability in the range of 4-7% over last 10 years

Following Corporate Movie was published on Youtube on Feb 2018 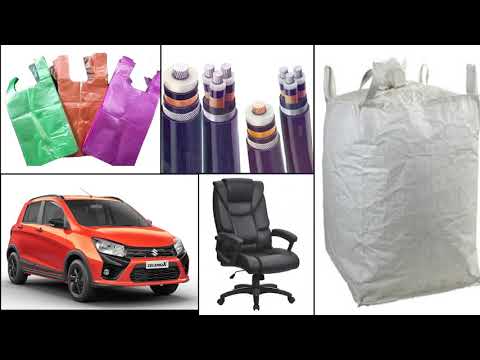 Next Posts will be segregated based on following:

Hopefully I should be able to have all this up over the next 1/2 weeks.

Disclosure: Took a very small tracking position, mainly to motivate myself to do the research. Hope to get differing opinions and insights. Not a SEBI Registered adviser. Do your own due diligence. It is likely that I may close out my position once I am done with the research and end up with any negative conclusions.

Focusing on the negatives: 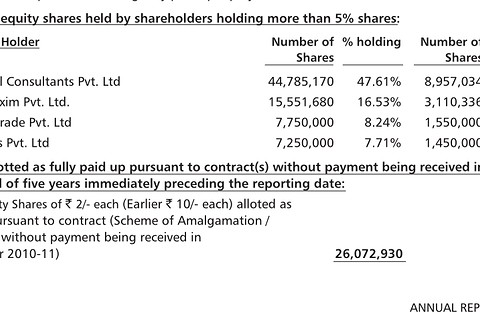 Taking only the “Secured Loans” Column: 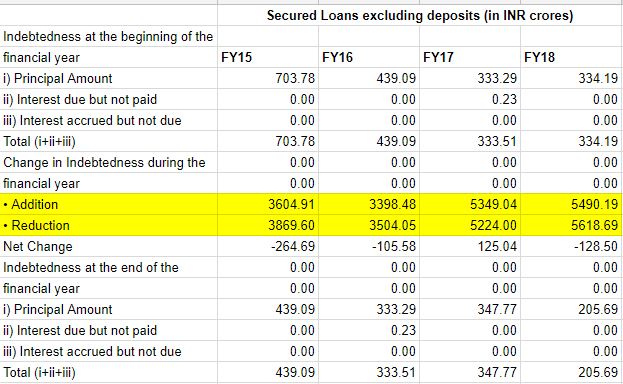 As can be seen above, there is overall addition and removal of debts at an order of magnitude difference to the eventual net debt levels.
This is highly unusual.
Is this a major red flag? or can we ignore it?

An official statement by DGCEI stated that Rajesh Kumar Kothari, president of Kolkata headquartered Kalpena Industries Limited, was arrested for alleged duty evasion and was presented before a local court on Friday.

Official sources said Kalpena Industries, manufacturers of PVC compounds of various grades, has its manufacturing units in Silvassa and Daman. The company was found allegedly engaged in clandestine removal of excisable goods either through bogus bills or without billing.

Apart from the above if any folks from Kolkata could provide any info about the reputation of the management?
So far, the signals are mixed.

Increasing contribution from exports.
Growth in Sales and Receivables in tandem.
Last 3 years numbers are inconsistent. 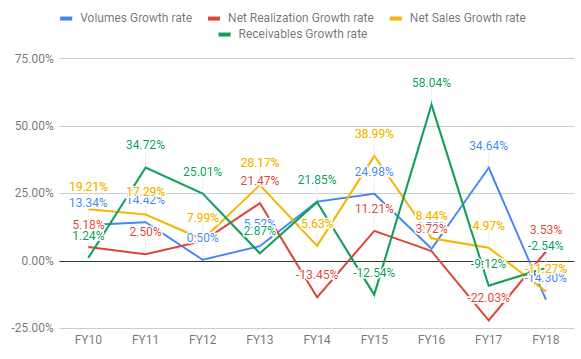 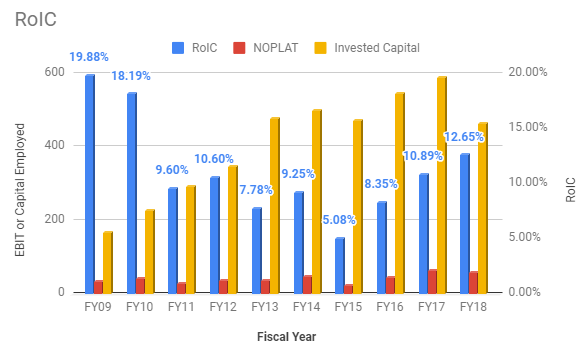 FY18 Payables includes a significant portion of Acceptances.
Leaving aside FY18, there is still a trend of better Working Capital Management.
Comparing the CAGR of Working Capital with Net Block, indicates to me that company is capex intensive while working capital efficient.

Clear demarcation of change in business fortunes around FY15.
Better PAT to FCF conversion post FY15 and dovetails with the snapshot from my first post.

All numbers sourced directly from AR or Screener.in 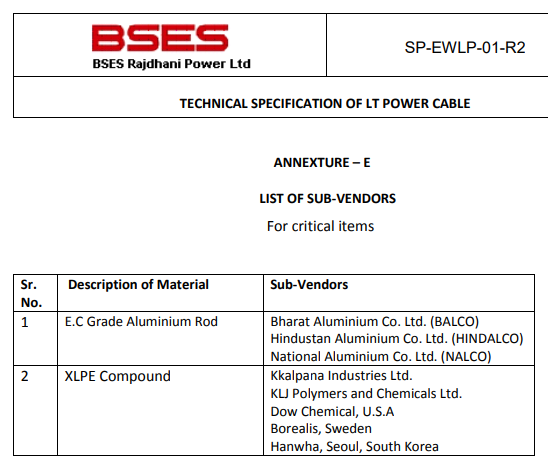 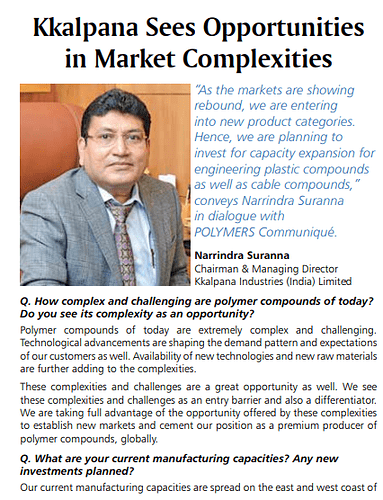 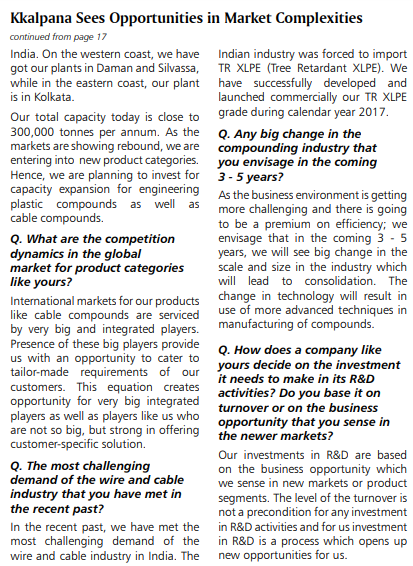 Leaving aside that there is another discrepancy which indicates that the anomaly detected in the Indebtedness statements persists.

Increase in Finance Costs while Reduction in both Long Term and Short Term borrowings. 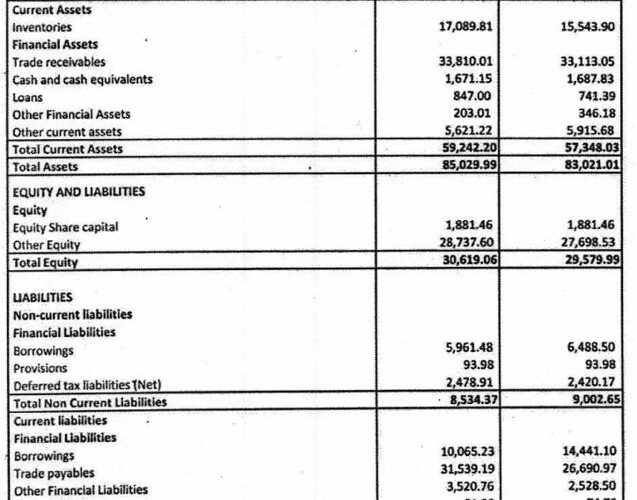 However, Working Capital numbers are improved.

So, boiling down to the million dollar question: Do I invest or skip it?

I intend to allocate not more than 2% and track it for next 1-2 years if the turnaround since FY15 continues and improves the Cash Flow numbers.

PS: My final post and hopefully there was some value addition.
Cheers!

While I understand this is too old a post of yours (and possibly may not remember the details), it would be helpful if you can throw some light on (if possible):

“something didn’t seem working and all and I got out somewhere in midway.”
---- Were you able to find some red flag or it was more of a hunch ? Just trying to understand your thinking behind this statement.

Thanks Ayush for taking time to respond a query from such an old post!