Starting a thread on IRCON as there isn’t one.

Before we get to anything, it’s important to set expectations for those going through this. Is this an incredibly amazing opportunity that’s going to be 10/20 bagger? Probably not.

This is a fairly straightforward play. Consistent performance + Dividends.

It’s a company that has:

The major overhang is the additional 10% that is to be divested by the government to meet listing norms. This has been getting pushed forward.

Infrastructure is one of the most difficult industries to be in. There is no problem that doesn’t exist in this industry – execution delays (environmental clearances, work-related delays, etc.), payment delays (but there’s escalation (i.e. you get paid extra as costs have gone up with time) sometimes), litigation (following from payment and execution issues), debt problem, low entry barriers (leading to), intense competition (which leads to competitive bidding at prices that aren’t realistic with the hope of making it up in escalations), sub-contracting problems (shoddy work by the sub-contractor and the contractor is responsible with performance guarantees, payments being withheld, etc.), middlemen and agents handling the process (‘business development’ expenses), execution issues (it’s not easy handling hundreds of workers on the site).

The process is fairly simple. A government (state or central) comes out with a tender and a list of pre-requisites (called Pre-Qualification (PQ)) that the bidders need to meet. Whoever bids the lowest wins the tender. The government then has to hand over the site to the contractor unencumbered (i.e. the full land has to be acquired without any issues).

The other route is nomination where the government department calls you and says “I want to do this. Kitna lagega (how much will you charge)?”. You go back and estimate and stuff and come back with a figure. Then negotiations follow and if all goes well, the order is yours. The majority of IRCON’s business (85.33%) comes from this route. This route also has scope for higher margins than the bidding route. How much higher? In India, the margins on bidding are in single digits (mid to high). In the case of nomination by railways, the figure was fixed at 8.5%. This system has changed now and there is restricted bidding (by only PSUs) but the management is hopeful of having margins somewhere around this range. In the international context, it can reach anywhere between 20-30%.

About IRCON – it is a contracting company that’s been around for 40+ years (AND has always been a profit-making company). They’ve participated in projects around the world.

What kind of work do they do in Railways? Building railway tracks, bridges, tunnels, upgrading tracks, electrification, etc.

For IRCON, railways continues to be the dominant source of business with 95%+ of its order book linked to railways. 99% of its business comes from governments.

There is a focus to increase their bidding business (Dedicated Freight Corridor is part of this).
Their international business is linked to the government’s relations abroad. When GoI extends a line of credit, IRCON gets some related work (Bangladesh, Sri Lanka). Also in other countries, diplomatic relations and interactions matter. 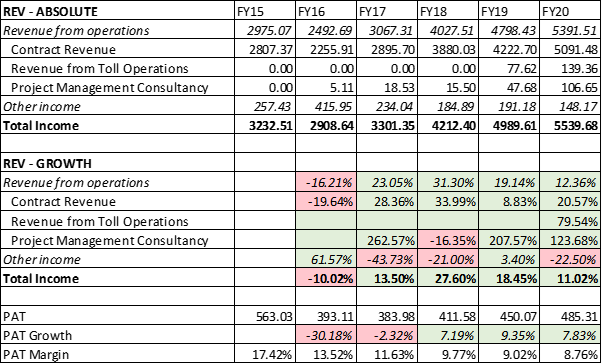 Contracting continues to remain the main revenue generator. Toll operations and PMC have been increasing steadily. Other income is primarily interest income and dividend income and appears to be declining. Cashflows are an important issue for a contracting company. From FY15 to FY20, IRCON has managed to have a positive cash flow from operations for most years (except FY18 and FY19).

In terms of subsidiaries and JVs, the company has a lot going on. Below is an image from the prospectus. 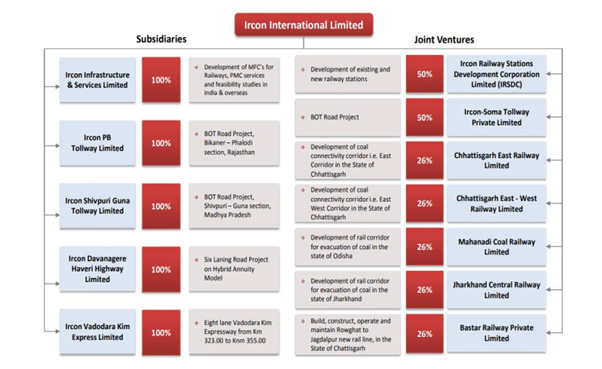 Among the subsidiaries, Ircon Infrastructure & Services Limited (“Ircon-ISL”) has good potential. IRCON ISL is a PMC (project management) company (similar to RITES) where margins are in the range of 20%+. This is an area of growth which the company is focusing on. (Interestingly, RITES is moving from PMC (high margin) to actual contracting work (lower margins)).

Among the JVs, IRSDC is a promising venture. RITES has also bought into it. There are two things the company does – station facilities management and PMC on station redevelopment. These are good margin ventures that aren’t capital intensive.

The relationship with the subsidiaries is that IRCON has to keep pumping in money by way of equity or loans to keep the project going.

There would be some development around these in the coming quarters.

IRCON is also trying to replace the financing of its subsidiaries with a bank loan. The stake sale and this switch is part of their effort to free up capital.

They have a parcel of land in Bandra which they have taken on for development. If this works out, it could result in a huge payday. The payment of the Rs. 1800 crore loan on their books is also tied to this project.

They’re also developing their property in Gurgaon and trying to lease it out. Progress on this has been slow (they tried another avenue hoping to get better returns, then COVID happened, etc.).

The main things/KPIs to watch for:

Fun fact: They’re planning on getting into a project in Malaysia on a barter basis. They’ll be getting palm oil in return (which they’ve tied up with STC to sell). It’ll be interesting to see how this works out.

Disclosure: Holding since the IPO. Looking to add more if it goes below 70/65 range (without any major changes in fundamentals).

A good set of questions. My response is as follows:

There’s now an OFS by IRCONS at 88 Rs floor. Looks like GOI dilution is happening quite fast in the Railways sector.

When you look at it, It’s pretty surprising they’ve been able to get this much done one after the other in the sector. Even now in the case of IRCON, the timing seems strategic. They patiently waited for prices to cross over before going ahead. They did the same thing with RITES as well.

IRCON International said the company's board of directors approved and recommended the issuance of one bonus share for each share held as on the date of record date.

Is there possible to send a recent research report of ircon international post Q1 result.

IRCON International Interview Key point discussed
The company has done extremely well in terms of total income and has grown by 115%.
In PBT shows 90% growth compared to last year first quarter.
Outlook for total income will be 6500cr for entire year.
Q3 and Q4 are crucial. Q2 everything is on track, but the Gurgaon Highway project got postponed.
Executable order book FY 22 – 23 is 34500cr. Out of 55000cr.20000cr is done or is being used The rest will be used for floating tenders.
EBITA for first quarter 12.9% and EBITA is going to be best among peer group.
Distributed huge dividend. 3 rupees per share. dividend distributed each quarter. 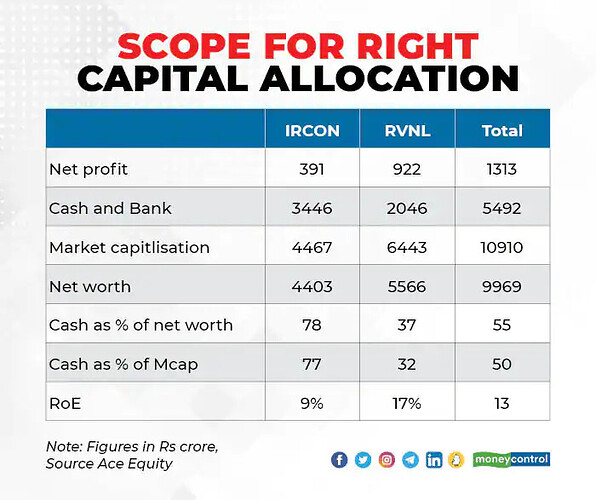 These proposals are part of a report on rationalisation of government bodies prepared by Sanjeev Sanyal, Principal Economic Advisor, Ministry of Finance, after studying the structure and distribution of Railways ministry.

can lead to huge value unlocking!

From Nov concall:
Nobody secures any projects on bidding. We are the only one. You may know many any PSU, nobody neither RVNL. RVNL has just started and you see RITES, but RITES is in a consultancy so it is more of a consultancy field. In execution again they are not there. If you see other PSU the SBL, nobody competes in the domestic or international market. We have been doing that for years now and we can continue to do that. We hope to secure projects but again I would repeat the margins are going to be under pressure.

The stable profit margins is soon going to be a thing of the past as the companies indulge in price competition with each other and private companies.