In his CNBC interview VV did not answer the question about what percentage of the loan book is secured vs. unsecured. Instead replied that the unsecured is as good as secured due to availability of cash in the borrowers’ bank account which the bank can pull from when required. Does anyone know the numbers or have they been reported anywhere?

Availability of sufficient cash in borrowers a/c. How can bank pull out with or without the consent of the borrower? The borrower can draw his cash from his a/c anytime, right? Though I am not a financial wizard, my common understanding is unable to digest this supported argument.

Banks have the right to take the cash out of the deposit accounts of the customers if their loan account becomes overdue. It’s not particular to idfc first bank but for all other Indian banks…

The larger point Vaidyanathan was trying to make was today the ways of evaluating a prospective loan customer can be done based on the cashflows they have vs traditional ways of doing secured lending. Cashflows are indicative of the EMIs they can pay and thus unsecured lending MAY not be risky. I am sure they look deeper than that however high level that was the point he was making.

Mr Vaidyanathan deserves full marks for the excellent performance. Bank numbers have matched the narrative set out at the time of merger, rather achieved certain targets early in spite of the covid. The management is very innovative. Mr Vaidynathan in his interview to CNBC has given a target of 6% NIM for 2024. So for the long term story is in tact.

Does anybody know IDFCF’s exposure to the Adani Group? Ideally it should be 0 as Adani group is mostly in Infrastructure but will be good to confirm.

I am not commenting on the credit worthiness of the Adani group. However as an Investor in the Bank, it would just be reassuring to know that the Bank has not lent to a mainly infrastructure player (with relatively higher leverage) after having forsworn infra lending.

As for the solvency of the Adani group, I leave the matter to people in the know as I don’t track or have positions either way on Adani group.

Disclosures:
Invested in IDFCF. No activity for last 6 months.
No positions in any Adani entity

This document talks about Adani debt Exposure and I didn’t find any mention of IDFC FB.
Adani Debt Data.pdf (702.6 KB)

The report doesn’t mention any Indian bank specifically. The only reason they mentioned ICICI/AXIS is because the analyst gives recommendations for those banks and they wanted to disclose that.
But, VV has categorically said several times that the bank is focussing on retail. And VV has been known to be a man of his words. I would believe him. However, if news comes that IDFC FB has lent money to Adani for infra projects in the last 2-3 years, my trust in VV would be broken. And since that is the only reason for being invested in IDFC FB, I would liquidate all my holdings.

It would be unfair to compare nims of idfc with other banks…idfc has a DSA agent fee component of 1.5% which kills the margins at Cost to income level. So NIM looks inflated, while if accounted with CI ratio, it would probably be lower than 4.5%.

I understand dsa fee is may be one time, but as per renewed guidance from VV since past 2 quarters, CI ratio is being targetted at 65% now , which will be achieved in 2 years from here.

There r two major overhangs here - CI ratio and equity dilution because ROE is not above teir 1 capital adequacy ratio. 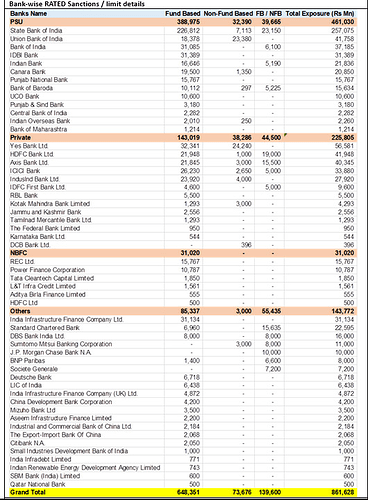 I wrote to investor relations to know what is the exposure to Adani group. I suggest everyone to speak to Investor relations to get the exact numbers.
But I feel we are reacting in haste. Let the heat cool down and think rationally. This group has assets worth billions of dollars. So banks will recover what they can with a bit of cut.( But all these are my assumptions …I don’t think this group will go down)

one correction if I may …VV never said he will build retail only bank. If you listen to last year conference calls …They will continue to lend to corporates which are good and selectively …if you see their corporate loan book is increasing.
they only said they will not lend to infrastructure based companies.
Note : IDFCFB is not retail only bank. If your thesis is that this is retail only bank , you may have to reconsider the decision

Look at the corporate section in the image

I second that. VV has always maintained that IDFC first will have a mix of 75:25 retail to corporate loan book. Coporrate loan book can be in any form (WC lines, Guarantees (non funded), term loans, ODs, and other corporate requirement loans)

the major thing which VV is retracting from now is - the CI ratio - which use to be a standard target of 55% just 3 quarters back - he changed that to 60-65% last concall and this concall - he specifically mentioned 65% and extended the tenure to reach 65%. This in my opinion will not let us reach an RoE of 15% in a jiffy. we are going to see a painful time of fund raise (this time around its going to come from IDFC ltd, so we can still safeguard our interests) however, if ROE above 15% or above Teir 1 ratio is not achieved soon (more likely scenario because our CI is going to trend slowly towards 65% - who knows he will start saying target is 65-70%), we will continue to see further dilution and hence can stagnante the share price.

its prudent for VV to focus on fixing CI ratio by gradually moving away from DSA model and try to reduce CI aggressively, other wise i dont see value creation in longer run if ROE remains lower than teir 1 CAR.

Hope he achieves it.

Discl: invested in IDFC first through exposure in IDFC ltd.

Agree. The Bank seems to be doing exceedingly well on all parameters guided for FY24-25 at the time of merger, EXCEPT the Cost-to-Income, on which they seem to be clearly faltering. The C/I of 55% seems not achievable by FY25 by any stretch of imagination, and some calculations would indicate that reaching even 65% by FY24-25 is difficult. Therefore, while RoE has picked up smartly to the 10.7% level presently, the move up from here to 15% is going to be a slow one, unless they fix the C/I with a greater sense of urgency.
Disclosure: Invested, through exposue in IDFC Limited. What will be the issue price Wil be interesting to watch