Heidelberg Cement India Ltd.- With all boxes ticking, can it deliver?

Heidelberg Cement India Ltd. (market cap ~3500 Cr.) is a subsidiary of global parent HeidelbergCement Group, based out of Germany. The parent company is one of the leading players in the world (ranks no. 2 in cement), with presence in more than 60 countries.

The company underwent brownfield expansion which it completed in 2013-14, the capacity of the company increased to 5.4 Mtpa (from 3.07 Mtpa in 2009). By 2019, the plants were running at above 90% utilisation rate, so the company commissioned debottlenecking plans to further increase its existing capacity by march 2020. The present capacity now stands at 6.26 Mtpa (as against total India capacity of nearly 490 Mtpa)

Company’s performance and Financials: (all data from screener.in)

Here are the sales and profit charts of the company for the past 10 years (in Cr.) 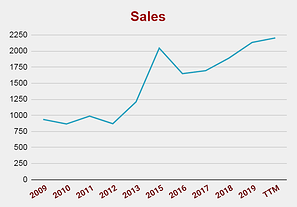 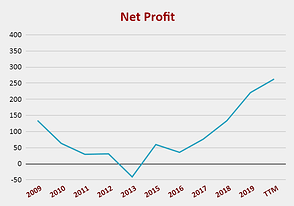 A glance over the past 10 year performance, in aggregate, looks very ordinary. Sales have grown at cagr of 10.8%, while net profit at 5.5%. However, after the company finished its brownfield expansion in 2013, there has been a significant improvement in its performance. The same is reflected in past 5 years data- sales have grown at 12% cagr, while profits at 49.4%.

Over the years, the company has resorted to various cost cutting measures and optimisation of its facilities. Some major ones are highlighted below-

Because of above several measures, the overall operating performance of the company has improved over the years. Operating margin has increased 1.5 times from 16% in 2015 to ~24% TTM and is clocking right up there with the big boys for the past few years (only Shree Cement significantly ahead). Roce also improved from 9% in 2015 to 25% in 2019.

The company achieved an inventory turnover of above 14 last year (highest in industry) and an asset turnover of 1.25. Ebitda/tonne efficiency as per last year’s annual report was Rs 987. While part of all of that may be due to higher utilisation levels of its existing capacities (above 90%) and lower base, improvement in these numbers along with operating margin does suggest the company’s brand has good growing visibility in the region.

This further gets reflected in the number of receivable days, which is ~5, and has been that way since 2015. Likewise working capital to sales is less than 5% and again most impressive in the industry. All these suggest excellent cash generating capabilities of the company, total cash flow from operations over the past 5 years is 3 times its total profits after tax for the same period.

In the short to medium term, due to the present lockdown and migration of labours, cement demand is going to be affected severely as per many analysts’ reports. For example, Crisil expects fall in demand to be between 10-15% this year even in the best case scenario, In the worst case it can be upto 20-25% (link)

For the cement industry, quarter 4 and quarter 1(summer) are the strongest, and both of them have been impacted, while the monsoon quarter (which is upcoming) is weakest. The fall in prices of crude however may provide some relief if the govt. decides to pass some of its benefit to industry/retail as it will reduce the freight costs. A lot will however depend upon govt spending on construction related activities and the easy availability of home loans.

In the long term, as per this ibef report (link), cement demand is expected to grow at 1.2 times gdp growth.

Disc.- Invested (10% of portfolio) and as such views expressed above might be biased.

Key to cement or other commodity based business is the LOW COST production and the AREA where it is operating .If you compare EBITA/ton across the pears one can very well understand the game .
sep 18 Vs sep 19
Shree Cement 907 -> 1481 —>up 63%
Mycem — 1041 -> 1169 ----->up 14%
Shree cement I like the most in the cement sector . What like doesn’t mean that everybody should like that but the underlying factors where the game is heading to is in indian market the margins are compressing and Shree cement has expanded the wings to middle east and acquired govt backed company in 2018 ( company CCC ) . No doubt that the company is ticking almost all the right boxes yet take some time to improve on margins .
Regards

Hi, while I appreciate the performance of Shree Cements, but can you tell me why compare improvement in efficiency for past one year only and that too from sep-18 to sep-19 ? Such kind of comparison where you selectively pick data can paint a very wrong picture. For example, from march 2016 to march 2019, ebitda/tonne for Heidelberg increased from 474 to 938 (nearly 100% increase) while during same period for Shree Cements it increased from 800 to 1000 (25% increase).

I am not saying Heidelberg is more efficient than Shree (I don’t track Shree cements), even though Heidelberg has improved but Shree is still ahead. But when you compare such statistics please compare it over a period to see the trend.

Besides there are other more parameters to consider. Shree is a fairly large cap company with a strong visible brand as compared to Heidelberg which is a small cap and in “brand building” stage. But the small size of the company is also the reason why it has better growth prospects.

 Input material prices and availability
Fly-ash availability has been hit as the power plants in the vicinity of cement grinding plants have been operating intermittently. For uninterrupted production, the company is sourcing fly-ash from other
power plants situated at a distance. HDPE bags, used to pack cement, are manufactured by labourintensive units, now faced with a labour issue. So far, none of the company’s vendors/contractors has expressed inability to fulfil contractual obligations besides some vendors requesting additional time to effect deliveries.

 Logistics: For FY20, the rail-road mix for the quarter was 54:46. /the current lead distance is ~368-370km. The company expects some constraints on availability of truck drivers, labour shortage at railway yards and delayed clearance of railway wagons. Its current level of dispatches are adequately met by trucks available in the market.

 Sales and demand: No clinker sales and 10 days sales lost (~100,000 to 125,000 tons) in March due to the lockdown brought overall volumes down 10% y/y to 1.09m tons. Many dealers are faced with a
liquidity crunch and want to liquidate inventory before placing fresh orders. Cement demand may be sluggish due to labour shortages in urban areas. However, areas where government spending is good, will see better demand. The company is concentrating on increasing its share in the trade channel, with the trade-nontrade mix in FY20 at 85:15. Volumes of premium products increased to 13% of trade volumes, up 38% y/y.

 Finance: In FY20, the company repaid the first tranche of NCDs of 1.25bn. Management talked of repaying 1.25bn in FY21 and `1.2bn in FY22 from internal accruals. It has put in place additional internal controls and reporting systems to facilitate daily monitoring and review
of the following aspects.
• Cash-flow including overdue outstandings from debtors;
• Inward and outward movements of materials;
• Availability of raw materials, semi-finished and finished goods
at all locations.

 Cost optimisation. In FY20, the company’s dependence on grid power dropped to 66% The pet coke-domestic coal ratio was 61:39. The company has an efficient process for changing its fuel mix within two days. The benefits of softening fuel prices will be seen in coming quarters.Further, as a cost-optimisation measure, tenures of various annual maintenance and service contracts have been extended by two to three months without any extra costs. However, a cost rise can be seen due to the long lead distance.

 Capacity expansion
During Q4 FY20, the company completed de-bottlenecking its cement grinding capacities in lmlai (Madhya Pradesh) and Jhansi (Uttar Pradesh). On completion of the de-bottlenecking, total cement grinding capacity would be 6.26m tons. Management spoke of maintenance capex of `500m and further debottlenecking clinker capacity. It will continue to progress on the Gujarat plant (~3m tons). It has deferred some scheduled repairs, which it said will not impact manufacturing operations.

Result out for Sep Quarter - PAT up 7% YoY to 624 Crores from 580 Crores. Market was probably expecting fireworks like Ambuja and ACC - hence negative reaction of -3%

Company seems to be planning an expansion in Gujarat. From last conference call, seems to be holding on to the margins and not letting go for higher volumes. Current utilisation rates are high prompting for expansion. Overall seems to be a long term player.
Disc: Invested